The state treasurer’s office is holding $5 million from a levy approved in 2015 that the school district is trying to hide.  We just need to request the funds and our problems are solved - why hasn’t the district done this?

The district has been deficit spending for five years.  Why wait five years to do something?

Is the school district threatening the community with cuts in teachers and courses for students?

This is not a threat because Ohio law does not permit a school district to spend money it does not have in the bank. We are in desperate financial condition through no fault of our own.

What is Van Buren’s average teacher tenure versus other districts?

What are Van Buren average class sizes versus other districts?

What is our mandated services cost per pupil compared to other districts?

Bussing option for dual routes - part of the performance audit?

Would open enrollment fall if this levy fails; would Van Buren schools no longer be desirable?

How are audit costs determined?

How often for performance audits?  What prompts that?

How often is the ‘wealthy’ designation evaluation done?

How much does Van Buren pay for a new superintendent?  Who pays for that job?

Vanlue vs. Van Buren comparisons should be explained more

Why is it that the state won’t assist for a new building because tax valuation is too high?  Our taxes have already gone up.

What would be our current financial situation be if the building levy would have passed?

Why is there no homestead exemption?

What about future taxes from industries such as Home Depot, Lowe’s, McClain, Campbell’s, etc.?

Will tax be based on Ohio gross income or Ohio taxable income?

How many mills is the elementary school bond and when will that come off our property tax?

Were these mills (from bond levy for elementary school) replaced with the last levy so it will be a net even?

Regarding reimbursement of the Washington, DC trip cancellation, how did Van Buren get penalized for that?

Why is a levy needed?

Why is the levy important for students and the community?

What happens if the levy fails?

Why is the Van Buren Local Schools deficit spending?

What is on the ballot?

Where is the money going?

Who will pay the levy?

Are social security benefits subject to the levy?

(I thought) there was a discretionary add on to the renewal within the last year, what is being done with that money?

Is this a renewal levy? If so, why the income tax for additional money?

Wasn't there a levy that passed in 2018 for Van Buren Schools? So this is a NEW and additional levy that will also go towards Van Buren?

Will my property taxes do down dollar for dollar?

What has Van Buren done to control costs?

If this levy does not pass what will be cut?

How do Van Buren's teacher salaries compare to others?

If the school needs this levy for operating money, how was it able to replace the bleachers?

How does the federal funding Van Buren receives compare to other schools?

How does VB's state funding compare to other schools?

Why is a levy needed?

Why is the levy important for students and the community?

The levy will preserve the educational excellence the district is built upon. The levy would address the budget deficit as well as allow for additional counseling and mental health services, development of Career Exploration and Development programming. Maintenance of current buildings is needed and included in the levy.

What happens if the levy fails?

Failure to find additional revenue will have a drastic impact on our educational programming. The Board of Education and administration will have to make decisions for the next budget on reductions that will have a direct impact on student education. This includes cutting teachers and, of course, opportunities for students.

Why is the Van Buren Local Schools deficit spending?

The district is deficit spending by $1.745 million this year. Since 2011, federal funding per pupil for Van Buren Schools decreased by 40%, while state funding as a percentage of total revenues fell from 35% to 26% of revenues. These losses must be absorbed by the district’s general fund budget to cover mandated services - many of which are unfunded - shifting the school funding burden to local taxpayers.

The Van Buren community has long expected that its schools deliver a comprehensive, quality education to its students. The schools have delivered, providing education that consistently meets or exceeds increasing state and federal educational requirements. This issue will allow the district to preserve the educational excellence the community has come to expect from its schools.

What is on the ballot?

Where is the money going?

This levy is to raise general operating dollars for the district. General operating dollars are used for the day to day operations of the district. Including, salaries and benefits, school supplies, maintenance, custodial, and food service expenses, utility cost, special education, preschool, student College Credit Plus classes, counseling services, transportation costs, extra-curricular activities, and other educational opportunities. Passage of this levy will allow the district to maintain the current level of state and nationally rated staff and programs.

Because 70-80% of the school's expenses are teacher and staff salaries, most of the funds will be used to retain and recruit great instructors. The remainder will support other operating expenses like school supplies, busses, and utilities. Funds may also be used for building or bus maintenance, but not for any new building(s).

Who will pay the levy?

Anyone living in the school district will pay the 1% income tax. Anyone who works in the Van Buren district, but doesn't live in it, does not pay the levy.

Are social security benefits subject to the levy?

No. Social Security benefits will not be subject to the 1% levy.

(I thought) there was a discretionary add on to the renewal within the last year, what is being done with that money?

There was no discretionary add of additional funds on the renewal last fall. The only change to that levy was a change in term from a five-year voting cycle to a continuing term.

Is this a renewal levy? If so, why the income tax for additional money?

Renewal levies don’t ask for additional money. This is a new operating levy, not a renewal and not for any building. It's the first new operating money Van Buren Schools has asked for in fifteen years. Imagine not getting a raise for fifteen years, that's the situation our schools are in.

Wasn't there a levy that passed in 2018 for Van Buren Schools? So this is a NEW and additional levy that will also go towards Van Buren?

Yes, the levy passed in 2018 was a renewal. The school received no additional new funds as a result of its passage. Yes, the 1% income tax on March's ballot is a new and additional levy to go to school operating expenses (not a new building).

Will my property taxes do down dollar for dollar?

Because it's an income tax, there will be no change in anyone's property taxes. Also, because it's based on income, everyone who lives in the district will support this, not just property owners (please note that social security benefits are not subject to this levy). Every other area school already has an income tax (except Findlay). We are asking for 1%, which is 20% less than the county school average income tax of 1.2%. For someone making $25,000, this levy amounts to 67 cents a day.

What has Van Buren done to control costs?

Since the passage of the 2005 levy, Van Buren has been fiscally responsible and cost control has been accomplished by:

1) Staff contracts that have included pay freezes and below market pay increases.

2) Changes made to the district's health-care plan to reduce costs, including higher participant deductibles and employees covering a larger share of the premiums.

If this levy does not pass what will be cut?

Two parts to this answer.

How do Van Buren's teacher salaries compare to others?

Please see the chart (Figure III-1) that illustrates how Van Buren teachers' average salaries are slightly above our peers (area schools) and less than both the Ohio average teacher salary and what teachers are paid at similar districts. Peer schools are Findlay, Arcadia, Arlington, Cory-Rawson, Liberty-Benton, McComb, Vanlue, North Baltimore, Riverdale, and Carey. 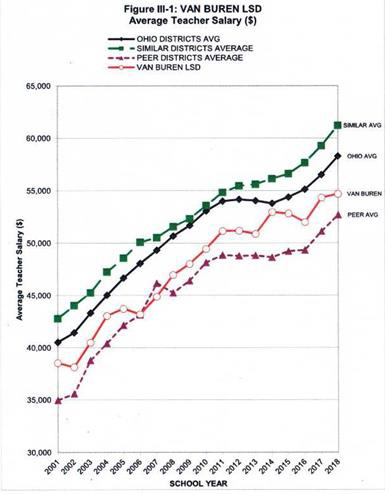 How does Van Buren's spending on administration compare to other schools?

This chart (Figure II-16) shows how Van Buren's spending on administration is less than its peers (area schools), the Ohio average and similar schools. 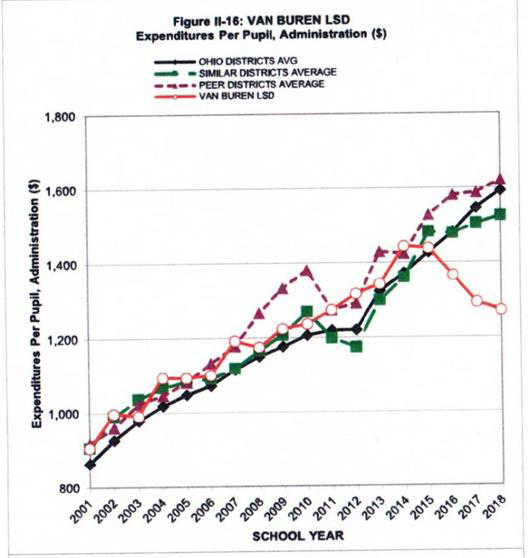 If the school needs this levy for operating money, how was it able to replace the bleachers?

Much of the funding our school receives is for specific purposes. The renewal levy approved last year has 1.5 mills earmarked for permanent improvements (it generates about $343,000 annually). That money must be used for capital improvements, not day-to-day operating expenses like salaries, utilities, and supplies.

Inspections of both sets of bleachers found them unsafe and hazardous. We, obviously, do not want anyone injured because of unsafe seating. Hence, the need to replace them. Because VB staff and volunteers did as much of the work as possible, replacing the gymnasium bleachers cost $120,000 and the football bleachers cost $400,000.  The money being used to repair the football field also comes from the permanent improvement "bucket".

As seen in the chart below (Figure IV-3), Van Buren consistently outperforms its peers, similar districts, and the State of Ohio average in terms of student graduation rates. 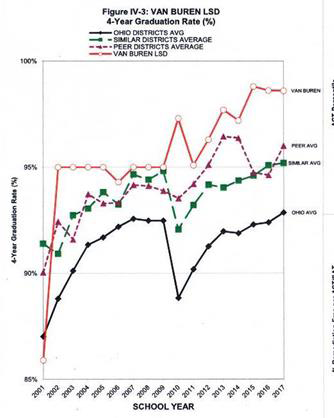 How does the federal funding Van Buren receives compare to other schools?

Van Buren receives significantly less federal funding per student than its peers, similar schools, and the Ohio average. The chart below (Figure II-7) illustrates how Van Buren receives less than half the money that other schools get. 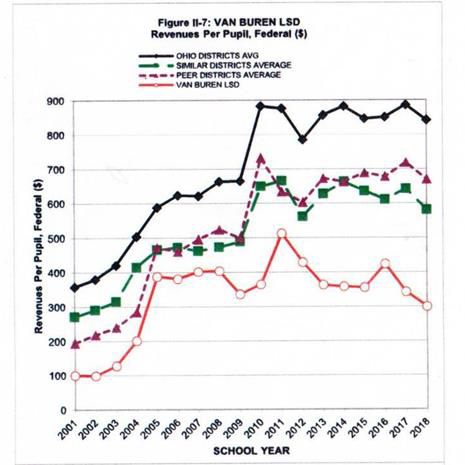 How does VB's state funding compare to other schools?

Because we are considered a "wealthy" district, Van Buren receives significantly less state funding than our peers and the average Ohio school. The chart below (Figure II-8) illustrates how our peers (local area schools) received about $3,500 more per student in state funding in 2018 than VB did.

The green line shows similar schools (those with median incomes like our district). VB also gets less state funding than them. 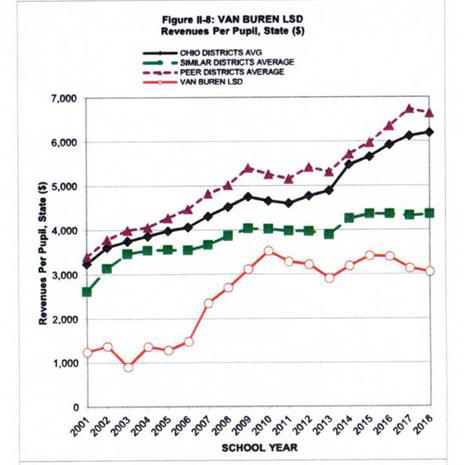