Homeopathy - An A to Z Home Handbook 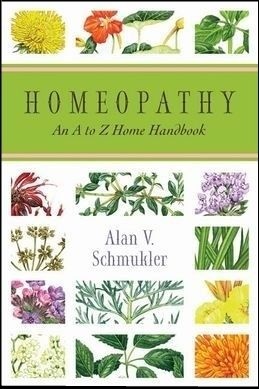 This unique book on a holistic, alternative healing method can be purchased at Amazon and other booksellers :  Purchase at:  Amazon

"Valuable to the novice as well as the experienced Homeopath. The best overview of Homeopathy I have seen."

"Honest, ego-free medical guidance. His advice is sound. The thoughtful reader would do well to follow it!"

"A survival kit of vital information. With this work homeopathy has indeed become medicine for the people's liberation."

Alan's book is a perfect companion to the NCH's First Response Homeopathy in Epidemics and Emergencies course: a ton of information... Heaven forbid we should find ourselves responding to a life threatening event, but if we did, this book would be a godsend! Having his book already dog-eared and visibly well-loved, certainly makes me feel empowered.

Homeopathy An to Z Home Handbook  is now also available in :

L�Homeopathie De A a Z  (French)

OMOIOΠAθΗΤIKH (Homeopathy for Health and Well Being -Greek )

Earlier in his life, Alan spent three years working at Einstein Hospital doing respiratory therapy. From that experience he was moved to explore other avenues of healing.  Alan has been helping adults, children and animals for many years.

Homeopathy An A to Z Home Handbook is now available i : English, French, German, Greek, Polish and Portuguese.  Purchase at:  Amazon.com

Millions of people are suffering needlessly because they don’t know about homeopathy, don’t believe in it, or it isn’t covered by their health insurance. This book is meant to help remedy that.

Why should you have this book?  Homeopathy An A to Z  Home Handbook is the most comprehensive book on acute homeopathy ever written for the lay person. It takes the reader from basic theory and practice to using remedies for both common and life threatening health problems. It covers subjects ranging from colds and injuries to arthritis pain, antibiotic resistant infections, side effects from vaccinations, chemotherapy, food poisoning, killer influenzas, Anthrax and heavy metal poisoning. You’ll also find heart attack, stroke, dental problems, drug overdose and much more.

This book is concise, clear and easy to use. The book describes over 180 medical conditions which are listed alphabetically. The conditions are described in plain English, without medical jargon and distilled into a single paragraph. This book tells you how to find the correct remedy, even when you don’t know the name of the ailment. Whether your occupation is nursing, baking, tailoring, carpentry, farming or firefighting, you’ll find remedies for yourself. About forty occupations and activities are listed with remedies for the occupational hazards.

Every epidemic disease that has plagued mankind such as Anthrax, Bubonic Plague, Cholera, Typhoid, Typhus, and Yellow Fever is listed along with remedies to both prevent and address the problem. If you’ve recently been bitten by a Lyme tick, you’ll find remedies to prevent the disease from taking hold.

The chapter on pregnancy and birth ranges from morning sickness and breast abscess to difficult labor, retained placenta, postpartum hemorrhage, newborn asphyxia and postpartum depression. Did you know there are homeopathic remedies for breach presentation, which can induce the baby to turn around? Homeopathy is one of the few safe options when you get sick during pregnancy.

Emotional states are given their due with remedies for grief, rage, depression, fears (panic attacks, fear of disease, darkness, airplanes, bridges, small spaces etc.). Even acute psychoses are covered. In a crisis such remedies are invaluable. They work quickly and without the drugging effects associated with pharmaceuticals.

Nobody wants to be in pain. The pain of various ailments, such as gallstone pain, stomach ulcers and neuralgia, is addressed throughout the book. There is also a heading Pain, devoted to different kinds of pain, including radiating, throbbing, wandering and unbearable pain. Other listings have remedies for pains after surgery and amputations.

If you have been made sick by a drug, pesticide or other chemical, a remedy made from that substance, can often clear it out of your body. This book tells you how to make a remedy from scratch, for just those circumstances. If you are running low on a remedy during an emergency, this book explains how to extend the supply you have.

This book gives specific remedies for the heart, lungs, kidneys and liver. In major illnesses, one of those organs is usually affected.

Ever wonder who uses homeopathy around the world and how it got started? You’ll find that too. Why isn’ homeopathy more well known in the United States. That question is answered also.

One wouldn't ordinarily suggest that lay people deal with diseases like Anthrax and Cholera, but these aren't ordinary times. In the next decade the medical system could be overwhelmed by epidemics of antibiotic resistant infections, natural disasters (due to global warming), outbreaks of exotic diseases, killer flus, bio or nuclear terrorism, power failures, or mass illness arising from genetically engineered food (now that the species barrier has been violated). Having worked at a major urban hospital I saw how the system can be overloaded just by a busy Saturday night. In such circumstances this book will be very empowering.

Homeopathy is a medical science which uses natural substances, like plants and minerals, to mimic illness and stimulate healing. It was developed by Dr. Samuel Hahnemann, after whom Hahnemann Hospital was named. It is based on two principles: 1. Like cures like. 2. The minimum dose.

1. The first principle is “like cures like”, or whatever symptoms a substance can produce, it can cure. Because onions can produce the symptoms of watering eyes and burning nose, a remedy made from onion, can cure the watering eyes and burning nose of someone with allergies. Another example is poison ivy. It produces burning, itching skin and sometimes stiff, painful muscles and joints. A homeopathic remedy made from poison ivy is used for everything from burns and skin rashes to rheumatoid arthritis.

2. The second principle is the mimimum dose. It states that to cure without harm, use the least amount of medicine necessary. That's important because side effects of regular drugs kill over 100,000 people a year, just in America. Homeopathic remedies are made by removing all toxic material and leaving just the imprint or energy pattern of the original substance. Remedies work by giving your body information about healing. It’s similar to the way a floppy disk gives information to your computer. Once your body knows what to do, it does all the healing by itself. Homeopathic remedies are free of side effects and safe even for small children.

According to the World Health Organization, homeopathy is the second most widely used form of medicine in the world. It is used by over 500 million people.

In England, France and the Netherlands, homeopathy is covered by the National Health Service.

In England 42% of the doctors refer their patents for homeopathic care. Homeopathy was made a medical specialty by an act of parliament and the Royal Family has been using homeopathy for the last three generations. There are seven homeopathic hospitals including the Royal London Homeopathic Hospital.

In France, 39% of physicians prescribe homeopathic remedies and eight medical schools offer post graduate degrees in homeopathy. French pharmacists are required to learn about homeopathy and the remedies are sold in all twenty three thousand pharmacies.

In the Netherlands 40% of the general practitioners give out homeopathic remedies.

The Royal London Homeopathic Hospital and the homeopathic hospitals in Glasgow and Moscow, have been in existence for a hundred years.

1. Homeopathic remedies are free of chemical side effects and safe for babies, children and people with drug sensitivities. By contrast, conventional drugs kill over 100,000 Americans a year.

2. It’s effective. Homeopathic remedies are effective against bacteria and viruses. They also work against antibiotic resistant infections. They are useful for many chronic ailments, for which there is no conventional cure. The Spanish Flu of 1918 killed over twenty milllion people worldwide and five hundred thousand in the United States. In the United States, those who got homeopathic treatment had a 98% survival rate. During the epidemics of the 19th century, (eg.cholera, typhus, plague, smallpox) people treated with homeopathy had survival rates 50% greater than those treated with conventional medicine.

Homeopathy is also amazingly effective in preventing disease. In the 1974 meninngitis epidemic in Brazil, 18,640 children were given a homeopathic remedy for prevention. The protection rate was 99%. In a smallpox epidemic in Iowa in 1902, the homeopathic preventive was 97% effective.

How do you use homeopathic remedies?

Most remedies come as little pellets, either B.B. sized or like tiny grains of sand. Just tap three B.B. sized pellets or 6-8 grain sized ones into the cap and toss them directly onto your tongue. Let them dissolve on your tongue. As you start to feel better, take the remedy less often. When you are really feeling good, stop taking the remedy altogether. It keeps working by itself for some time. Don’t ever think you have to finish the bottle. With homeopathy, less is more. Try to avoid mint or lots of coffee when you are on a remedy, since those substances can sometimes antidote its effect.

Below are some of Alan's Editorials, Articles, Cartoons, Tips & Secrets, Homeopathy Crossword Puzzles and Interviews with famous homeopaths.

This is a sampling. For more, go to:   http://hpathy.com/editorials/

The War on Cancer?

Contrived Research from the NHMRC

The Heart of a Healer

All of Alan's cartoons can be found here:

Here are some of his favorites:

(Note: When you get to the cartoon, you may click on the image to enlarge it)

http://pics.hpathy.com/cartoons/schmukler-quack.gif  -You must be a quack.

Interviews :  For all interviews go to : http://hpathy.com/homeopathy-interviews/