In this tutorial, we will introduce and describe different functionalities of SANSA. First, we will cover a brief introduction to the underlying processing engine of SANSA, Apache Spark. Later, we will dive into the details of SANSA’s various building blocks organized as its four layers described below.

A Resource Description Framework (RDF) is a W3C standard for describing resources. A resource is a fact or a thing which can be described and identified. A person, a home page, this tutorial is a resource. An RDF resource is identified by a URI reference.

Through this tutorial, we will consider people as resources. An RDF graph is a directed graph containing nodes and arrows. See Figure 1. below as one example of a triple.

The  resource, “Jens Lehmann”, is identified by a Uniform Resource Identifier (URI). Each resource contains a property which represents the relation between the subject (the resource itself) and its value (object).

SANSA’s interactive Spark Notebooks will be used to demonstrate the APIs of different layers. SANSA-Notebooks are easy to deploy using docker-compose. The deployment stack includes Hadoop for HDFS, Spark for running SANSA APIs, Hue for navigating and copying file to HDFS. All examples and code snippets will be shown and prepared using SANSA-Notebooks throughout this tutorial. We recommend setting up SANSA-Notebooks for this tutorial, however we provide a guideline on how to setup Scala-IDE as well in case someone prefers using the IDE.

This tutorial will guide you to setup SANSA on your Scala-IDE[3]. At the time of writing, the latest version of Scala-IDE is 4.7.0. The version of Java used on this tutorial is 1.8. The operating system used is Ubuntu 16.04, but overall this is not a problem. The only environment requirements are Scala-IDE, Java, Maven, and git to check out the source code of the SANSA.

Scala-IDE comes with Maven integration by default. Follow the instructions on our “Getting started with SANSA”[4] to check out the code from the Git repository. In this tutorial we will use our Maven template[5] to generate a SANSA project using Apache Spark.

After you are done with the configurations mentioned above, you will be able to import the project.

In order to import a Maven project, you should use the Import from the Scala-IDE. Right click somewhere on the left panel (Package Explorer) and then choose Import. The Import form will give you the option to choose the way to import project from. In our case, we will be using the Maven template, therefore, choose “Existing Maven Projects”. Figure 3. list the options to import maven projects. 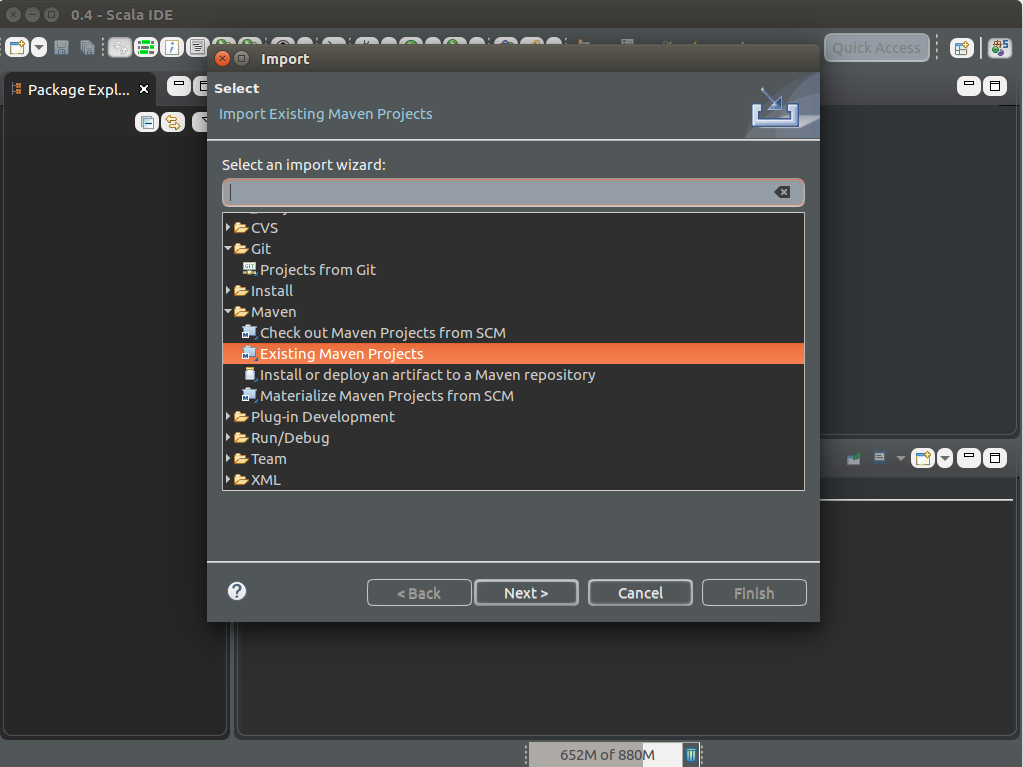 After you choose the SANSA-Template-Maven-Spark into Scala-IDE, you could import the project. 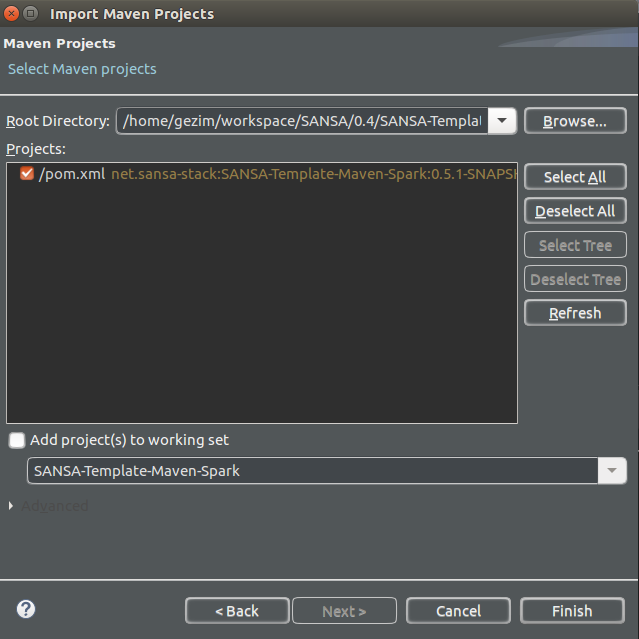 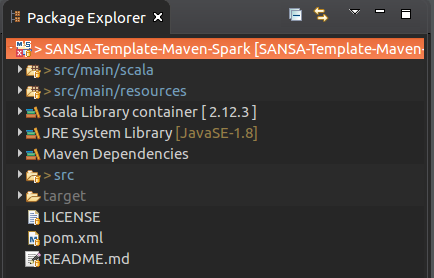 For changing the Scala version you should do these steps: 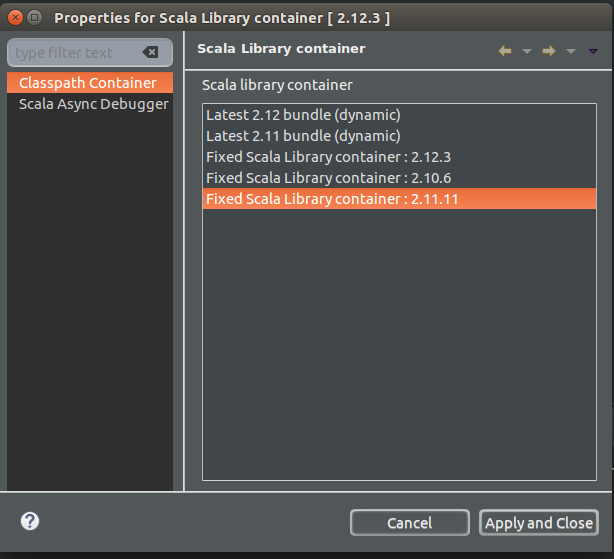 In case of missing depencies from the SANSA stack on your maven (local) repository and you haven’t done mvn -U install when cloning the repo. Do it manually by : 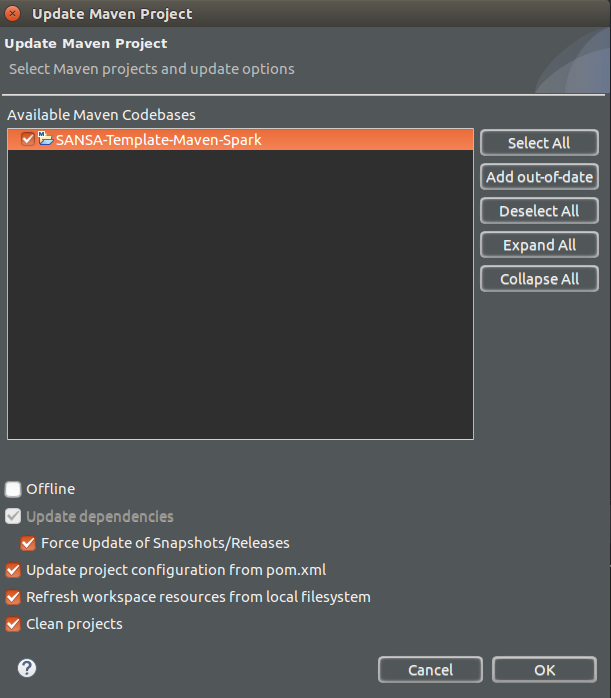 After you are done (you may need to wait a bit when run for the first time, due to dependency downloads) with the setup, you will be able to run SANSA code on your IDE using Apache Spark. Enjoy it :).

As another alternative to the IDE, we provide you a developer friendly access to SANSA — the SANSA-Notebooks[6]. SANSA’s interactive Spark Notebooks will be used to demonstrate the APIs of different layers. SANSA-Notebooks are easy to deploy using docker-compose. The deployment stack includes Hadoop for HDFS, Spark for running SANSA APIs, Hue for navigating and copying file to HDFS. All examples and code snippets will be shown and prepared using SANSA-Notebooks throughout this tutorial. 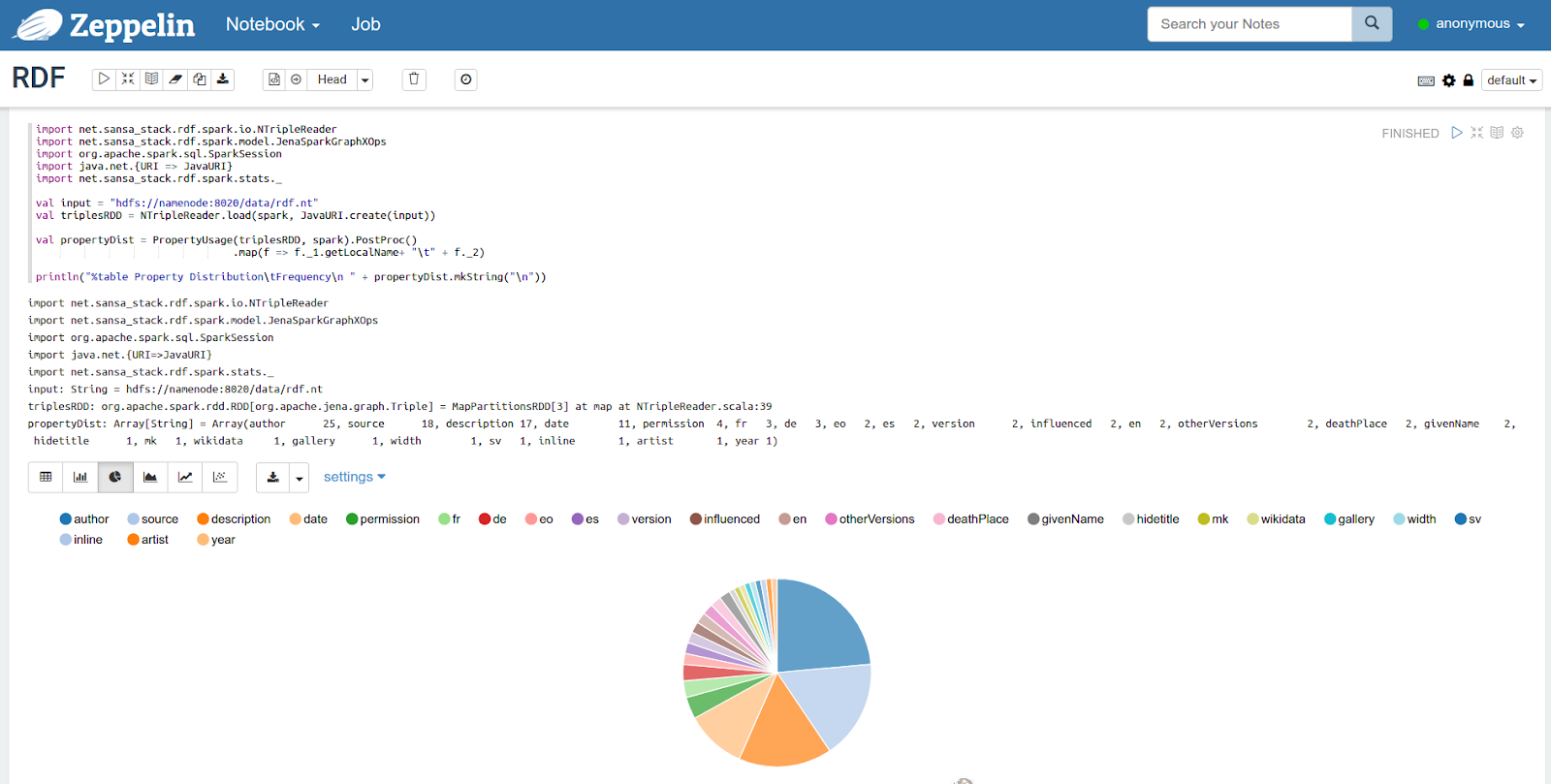 During this tutorial we will run SANSA-Notebooks on the cluster locally.

In order to run SANSA notebooks your system should fulfill these requirements:

After you have installed the docker, the notebooks can be downloaded, deployed and run by just doing:

Since SANSA-Notebooks bundle the SANSA-Examples, you should get the SANSA Examples jar file. To do so, just run:

When the jar has been downloaded, start the cluster (this will lead to downloading BDE docker images, it may take a while :) ):

When start-up is done you will be able to access the following interfaces:

To load the data to your cluster simply do:

Go on and open Zeppelin (http://localhost/ ), choose any of the notebooks available and try to execute them.

After you are done with the notebooks, you can stop the whole stack by:

SANSA provides APIs to load/store RDF data in several native formats, from HDFS or a local drive. SANSA has a rich set of functionalities that can perform distributed manipulations over given data. This includes filtering, computation of statistics [2], and quality assessment over large-scale RDF datasets, in a distributed manner ensuring resilience and horizontal scalability.

SANSA uses the RDF data model for representing graphs consisting of triples with subject, predicate and object. RDF datasets may contain multiple RDF graphs and record information about each graph, allowing any of the upper layers of SANSA (Querying and ML) to make queries that involve information from more than one graph. Instead of directly dealing with RDF datasets, the target RDF datasets need to be converted into an RDD of triples. We name such an RDD the main dataset. The main dataset is based on an RDD data structure, which is a basic building block of the Spark framework. RDDs are in-memory collections of records that can be operated on in parallel on large clusters.

SANSA provide mechanism of reading RDF model in the format of RDD/DataFrame/Dataset of triples.

After reading RDF triples, one can save them back in the format of NTRIPLES. SANSA, provide such functionality out-of-the-box.

Listing 2. Read an RDF graph and represent it as an RDD of triples (Line7) . Afterwords, it save it back to disk as an NTRIPLE file (Line 9) .

The very basic transformation in SANSA is so-called RDD of triples. Each triple which contains <subject, predicate, object> is represented in the format of immutable block of records using the RDD → RDD[Triple].

This model a set of triple operations in the format of RDDs. We will cover (see Listing 3. for more details) some of the most important functions implemented in SANSA such as: union (Line 21), difference (Line 23), add (Line 34), remove (Line 43), contains (Line 58), and more which work on the triple level.

The same operations are also provided for the DataFrame and DataSet. The only differ is that while reading triples, you should define it using DataFrame or Dataset. Listing 4. gives one example on how to read triples in the format of DataFrame (Line 8).

The graph representation (using GraphX) of triples is given as a Property Graph Model which contains a VertexRDD of unique URIs (from subject and objects) and their relations represented via the EdgeRDD. Listing 5. gives an example on how to transform an RDD of triples as a graph (Line 10) and compute pagerank or resources (Line 11) from the graph.

SANSA RDF layer provide a build in dataset statistics and quality assessment computation over large-scale RDF datasets. DistLODStats[8] compute 32 pre-computed statistics and report a Void description of the data. The statistics can be computed (voidifyed) as a whole or individually, based on the user preferences. Listing 6. gives one example on how to compute the property distribution (Line 10) over the graph.

Querying is the primary approach for searching, exploring and extracting insights from an underlying RDF graph. SPARQL is the de facto W3C standard for querying RDF graphs. SANSA provides cross-representational transformations and partitioning strategies for efficient query processing. It provides APIs for performing SPARQL queries directly in Spark programs. We will cover the following query engines of SANSA:

The default approach for querying RDF data in SANSA is based on SPARQL-to-SQL. It uses a flexible triple-based partitioning strategy on top of RDF (such as predicate tables with sub-partitioning by data types). Currently, the Sparklify[9] implementation serves as a baseline.

The approach (see Listing 8.) gets as an input the RDD of triples (Line 8) and a SPARQL query (Line 8) and starts evaluating it (Line 12).

Prior to querying, the user provides two input files: one is mappings and one is configurations. Mappings are links between elements from data schema (e.g., table and attributes) to elements from ontologies (classes and properties). Configurations contain information needed to access the data source, e.g., user/pass, host/port, cluster name, etc.

User issues a SPARQL query, which uses terms from the ontology. The query is internally decomposed into subqueries, each triggering a relevant source selection process, which looks at the mappings and finds what data sources contain schema elements mapping to SPARQL ontology terms (properties and classes). Once relevant data is found, it is loaded on-the-fly into Spark DataFrames where data can undergo various (relational) operations like, projection, selection, ordering, etc.. Subresults are finally joined generating a final DataFrame, which is returned to the user in a tabular format.

Data is queried in the following way:

Where configFile (Line 3) and mappingsFile (Line 4) are the paths to Configurations (example) and Mappings (example) files, and query (example) is a string variable holding the SPARQL query.

RDFS and OWL are well known for containing schema information as an addition to assertions or facts. The forward chaining inference process applies inference rules on the existing facts in a knowledge base to infer new facts iteratively. Doing so, it enriches the knowledge base with new knowledge and allows inconsistencies-detection. This process is usually data-intensive and compute-intensive. SANSA provides an efficient rule engine for the well-known reasoning profiles RDFS (with different subsets) and OWL-Horst. By using SANSA, applications will be able to fine-tune the rules they require and - in case of scalability issues - adjust them accordingly.

SANSA makes full use of, and derives benefit from the graph structure and semantics of the background knowledge specified using RDF and OWL standards. SANSA tries to exploit the expressivity of the knowledge structures in order to attain either better performance or more human-readable results. Currently, this layer provides algorithms for: Clustering, Anomaly detection [3], Rule Mining and Graph Kernels. 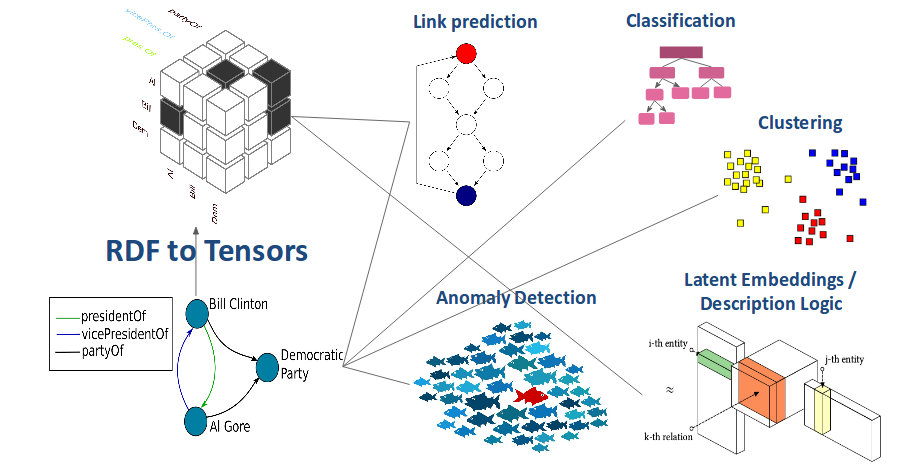 Each of the clustering algorithms takes RDF N-triples as input and output an RDD of cluster id and the triples i.e, RDD[cluster_id, List(Triples)].

The idea would then be to benefit from the genericity of the stack (especially in terms of intermediate data structure) to e.g. pipe together various kinds of clustering algorithms.

Given an RDF graph, The RDF kernel constructs a tree for each instance and counts the number of paths in it. Given that the literals in RDF can only occur as objects in triples and therefore, have no out-going  edges  in  the  RDF  graph. Term  Frequency-Inverse  Document  Frequency(TF-IDF) is applied to litzerals by creating a dictionary and vectorizing the string literal values.