Question: Ensuring the conditions for universal and affordable access to the Internet

In the 21st century, there is an increase in technological creations. As such, our role is to promote: the provision and accessibility of INFORMATION AND COMMUNICATION TECHNOLOGY (ICT), under financially affordable conditions. Ten years ago, in most countries, universal access only applied to wired infrastructures. Today, it encompasses data services.

The means of communication have diversified and different types of infrastructures must be put into service as efficiently as possible to reach the greatest number of people. Recently, member states of the European Union had to provide basic and quality telecommunication services at an affordable price. It is partly on this example that the stakes of the issue - Ensuring the conditions for universal and affordable access to the Internet - is the creation of a telecommunications access system on a global scale.

-Wireless: These are made possible through the use of a modem, which detects Internet signals and sends them to other devices.

-DSL: Designating Digital Subscriber Line, it uses an existing two-wire copper telephone line connected to the home so that the service is delivered at the same time as the fixed telephone service.

-Cable: The wired internet connection is a form of broadband access. Through the use of a cable modem, users can access the Internet on cable television lines. Cable modems can provide extremely fast Internet access.

-Underwater cables: The first digital submarine cables date back to 1988 with the installation of the Transatlantic Telecom cable (TAT-8), containing two pairs of optical fibres, with a capacity of 8,000 to 12,000 simultaneous communications. Since 2014, with 263 cables in function and 22 in project, these submarine arteries concentrate 99% of the circulation of the international data and spread on all the continents, outside Antarctic, the interconnection of the Internet network, the network telephone and professional digital television networks. 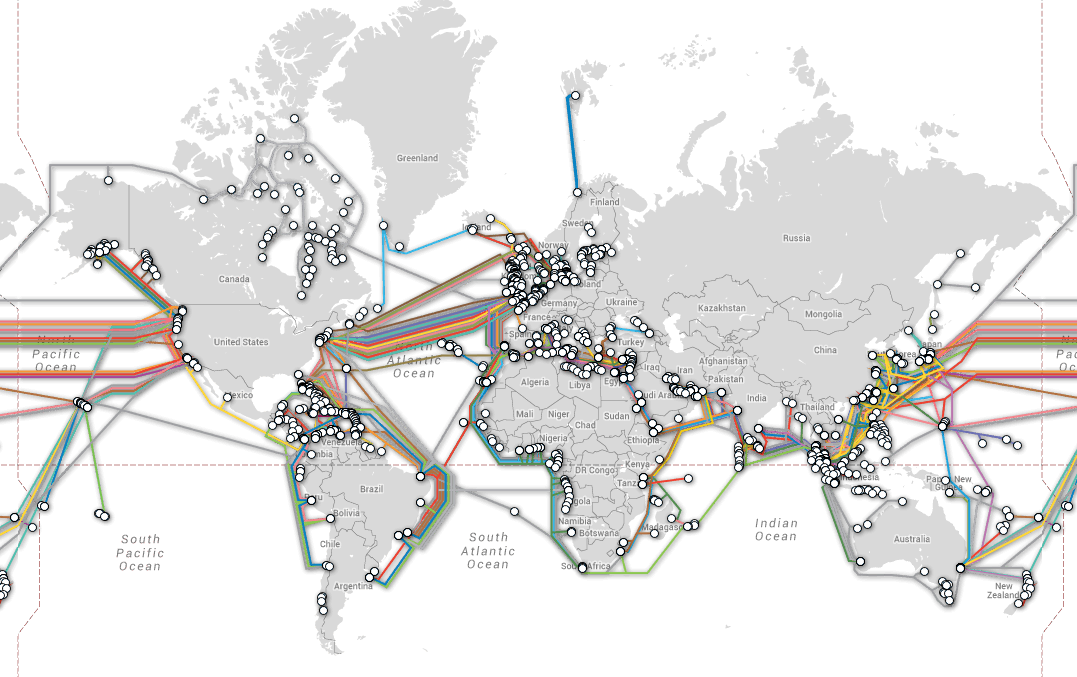 Map of submarine cables in the world

-Satellite: In some areas where the broadband connection is not yet available, a satellite internet option may be available. Similar to wireless access, the satellite connection uses a modem. 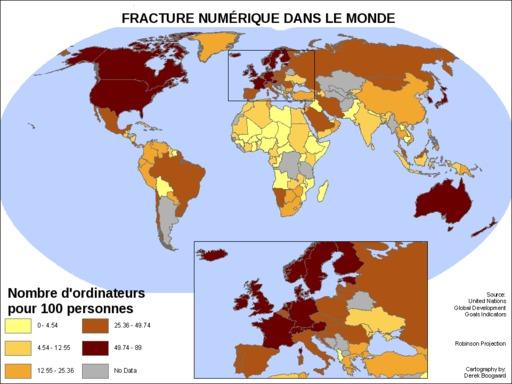 Mapping of the digital divide in the world

ITU assigns radio frequencies and satellite orbits worldwide, develops technical standards that ensure the seamless interconnection of networks and technologies, and strives to improve access to ICT for underserved communities. ITU is committed to connecting all people on the planet - no matter where they live and whatever their means. Through our work, we protect and defend the fundamental right of everyone to communicate. (Official definition from the IUT website)

The Internet has made society a better place to live. Since its creation, we have a unique infrastructure for economic opportunities and globalization. Internet has improved the quality of life of people in all parts of the world and can continue to do so. And for having passed the milestone of 3 billion users, the Internet has proven how important it is in our societies to, for example:

Here the percentage of Internet users per country in the world as well as the number of inhabitants connected in 2013: Africa, South America and some Asian states do not have a network connection for half of the population. 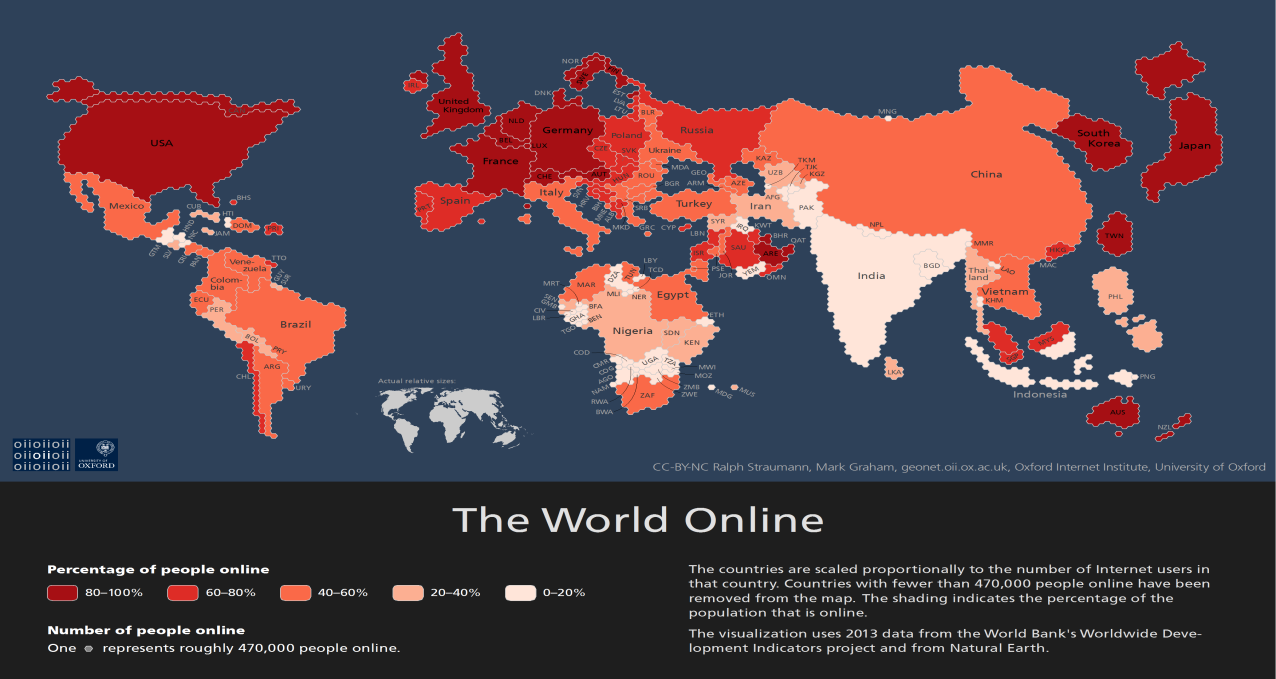 It is with this in mind that the UN has recently suggested that Internet access should be a human right, because it is only with a shared awareness of current challenges that we can emerge towards a more connected world. This would mean being able to establish a reliable and inexpensive Internet connection. 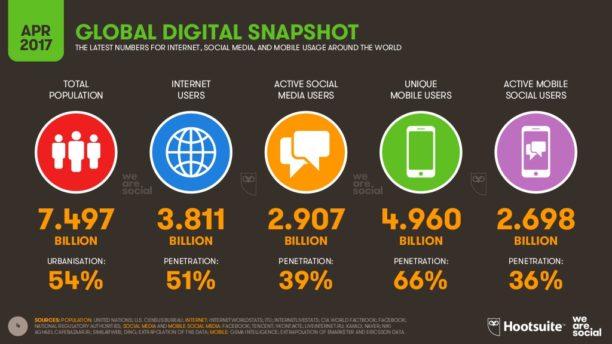 Already in 2017, half of the world's population benefits from the internet. But despite the efforts made today, parts of the world called "white areas" do not have access to any connection and the digital divide remains important.

1969: Computers from UCLA and Stanford Research Institute exchanged the first message on the Arpanet network

1972: Creation of the first email addresses

February 1993: the very successful Web browser “Mosaic” supporting a combination of text and graphics allows democratization of the Internet. 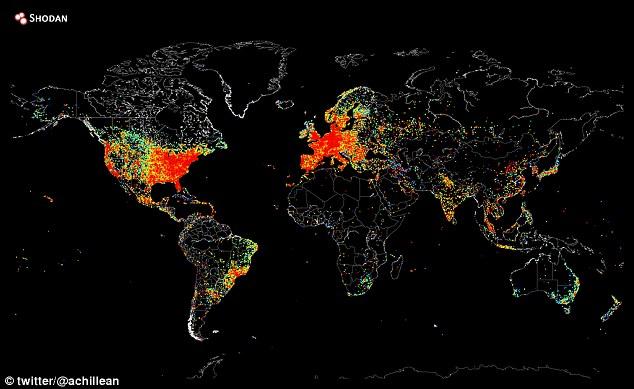 1996: Wi-Fi appears and Tunisia becomes an African pioneer by allowing the commercial and public use of the Internet in the country.

2012: The UN Human Rights Council recognizes the right to freedom of expression on the Internet.

2015: 3.81 billion Internet users, about half of the world population. 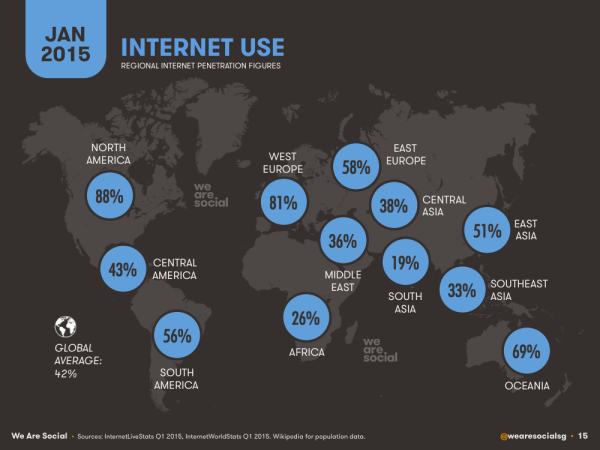 Percentage of Internet users by region of the world

2016: A UN resolution to engage states to promote and facilitate access to the Internet. From now on, for the United Nations, to cut Internet to a part or a whole population is a violation of the human rights.

Technological innovations are already transforming the supply of universal access in rural and remote areas, in developed and developing countries alike. To a large extent, this transformation is stimulated by new access technologies such as WiMAX (broadband internet transmission and access system) and Wi-Fi.

It is possible to install Wi-Fi networks, even in the most isolated areas, using mesh network architecture. For example, this is the case of the village of Yachana, in the Amazon basin in Ecuador, which is a two and a half hour motorboat from the nearest town. Funedesin (Foundation for Integrated Education and Development), a non-governmental organization dedicated to local development, has developed a wireless mesh network to connect a school to an ecotourism centre and a biological science centre. This Wi-Fi network is connected to the Internet by a satellite link and laptops are powered by solar energy. Funedesin is creating a training centre in the area for the creation of mesh networks, financed by tourism revenue.

Wi-Fi networks at the urban scale are becoming more widespread. Wi-Fi access equipment is affordable for users but commissioning, operation and maintenance of these networks are expensive. In 2006, local governments around the world spent nearly $ 235 million for the development and operation of these networks. Although still expensive, these systems help improve Internet access in the city.

At the beginning of 2007, Singaporeans benefit, almost nationwide, from free wireless connectivity at speeds up to 512 kbps, thanks to the “Wireless@SG” program, launched by the IDA (Infocomm Development Authority of Singapore) and administered by private operators. The goal of such a program would be to increase the number of Wi-Fi public access points in the country from 900 to 5,000. Users do not need to be subscribers of these operators to benefit from free access. The three operators are investing about $ 65 million to expand the network, with IDA supporting $ 19 million of this amount.

In India, there is still a "Universal Service Obligation Fund", which provides means for:

• modernizing villages with more than 2,000 inhabitants, the modernization of public telecenters to include data transmission equipment and the gradual installation of broadband internet connections;

• providing inhabitants of rural areas with technological supplies (computers, telephones ...) in accordance with the objectives set by the State.

Kenya is also ranked among the most connected countries in the world. It is also one of the African countries with the most powerful digital economy. With a population seven times smaller than that of the United States, Kenya has a much faster flow. The country saw its number of Internet users increase between 2005 and 2011, from 1,104,728 to 11,650,000. These figures prove that the Kenyan people are confident about the use of telecommunication networks. The Kenyan government does not use technical filtering or censorship in areas such as politics. Yet the country must also address the problem since Internet services are limited to rural areas. This inequality is due to the lack of infrastructure in these areas.

In order to answer these questions, the government plans to put in place a long-term strategic plan for information (a program to develop optical fibres across the country). According to Telecommunications, Communications and Technology Secretary Freud Mantiang'i, "A vibrant ICT sector is important for promoting expansion and generating productivity in other growth sectors, including agriculture, manufacturing, tourism, entertainment industries.

Finally from the 16th to 18th of November 2005, the World Summit on the Information Society (WSIS) was held in Tunis. The purpose of this summit was to clearly articulate the political ambition and take concrete steps to lay the foundations of an society of information accessible to all, while fully taking into account the different interests at stake of WSIS are to improve internet access:

2. Connect institutions of secondary or higher education and primary schools

6. Connect all public, local and central governments, and provide them with a website and an e-mail address

7. Encourage the development of content and technical conditions to facilitate the presence and use of all the languages ​​of the world on the Internet

8. Ensure that more than half of the world's inhabitants have access to ICT

• Some countries, such as France, have set up satellites specialised in telecommunications and the internet, with the aim of enabling isolated villages to benefit from them.

• Facebook, in partnership with Google, is currently developing a solar-powered drone that requires the same energy as three hair dryers, which will give worldwide access to the internet, especially in remote areas. Indeed, this is the second test completed in two years and this is a success since it "landed perfectly on our landing site" according to the Facebook team. The drone is larger than a Boeing 737 and is designed to stay aloft without descending for months at about 18,000 feet above the ground.

ITU report about internet in the world: http://www.itu.int/net4/itu-d/icteye/Topics.aspx?TopicID=7

Kenya has a faster internet connection than the USA: