Honeycrisp is an apple that often displays significant pre-harvest drop. The initial harvest usually occurs during the second week of September and this frequently coincides with periods of hot weather.  Consequently, a strategy is necessary to retard drop until the crop can be harvested.  ReTain is often applied at the relatively low rates of 1/3 to ½ pouch of ReTain per acre to minimize negative effects that result in retarded red color development.  These rates are not always adequate to retard drop and the way the weather has been so far this summer, and this may be the case in 2018.  McIntosh and Gala ripen about the same time as Honeycrisp thus creating a harvest management dilemma for growers.  Honeycrisp is generally the most popular apple grown in New England and there are advantages to having Honeycrisp available on the tree in good condition during the first two weekends of October. In 2017 we did a study where we applied two full rates of ReTain (2 pouches of ReTain per acre).  The first application was made at about 3.5 weeks prior to the normal harvest of Honeycrisp and the second 2 weeks later.  We followed preharvest drop starting in the first week in September and continued through the Columbus Day weekend.  We harvested fruit at 7-10 day intervals starting on September 14, the date of the first regular harvest of untreated Honecyrisp and the last harvest was made on October 12.  Fruit quality was assessed on each of these days.  All remaining fruit on the tree were harvest on Oct 12 and placed in regular air storage.  Complete results of this experiment can be found in Fruit Notes Vol. 83, Summer 2018, 1-7.

The two applications of ReTain effectively controlled preharvest drop and limited cumulative drop to less than 12% by October 12 (Figure 1).  Ripening of treated fruit was delayed, flesh firmness loss was dramatically reduced, and the quality of fruit harvested between October 5 and 12 was exceptional.  All fruit on the tree developed good red color such that only one harvest was needed.    On October 12 fruit were placed in regular air storage at 32° F until Thanksgiving.  When removed from storage treated fruit were in good condition and showed no significant elevation of storage disorders.

Use of high rates of ReTain on Honeycrisp appears to be is an excellent strategy if you wish to have high quality Honeycrisp available for pick-your-own in October or if you wish to delay ripening of Honeycrisp as a management tool to more effectively schedule harvest of Honeycrisp, McIntosh and Gala.  Honeycrisp harvested during the first two weeks in October do have storage potential so you will have flexibility in marketing the remaining fruit at harvest. We do suggest, however, that fruit should be sold within a month of harvest. 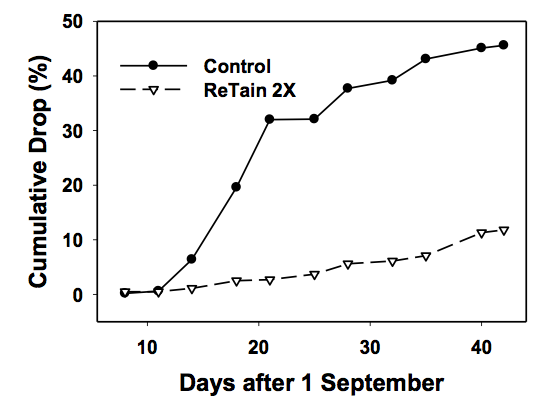 Cortland is a high quality apple that remains very popular in New England. Unlike McIntosh, it is not prone to pre-harvest drop. Consequently, the harvest of Cortland is sometimes delayed longer than optimal in order to harvest McIntosh, Gala and Honeycrisp. Cortland does soften especially if it is allowed to stay on the tree too long. While evaluating the use of higher rates of ReTain on McIntosh we noted that the treated pollinizer Cortland in our block that received two full rates of ReTain had developed good red color in early October, had higher flesh firmness and had outstanding flavor. Some growers in Massachusetts are using high rates of ReTain on Cortland with excellent success. Fruit harvested in early October has excellent quality and good red color.

The most satisfactory results were obtained when two full pouches of ReTain were used, applied either at one time or as a split application. The first application should be made at the time the first ReTain application is made on McIntosh or 3.5 to 4 weeks before anticipated harvest of Cortland. If the application is split, as we normally do, the second application  should be made 2 to 2.5 weeks later. We determined that if these ReTain-treated fruit were gassed with SmartFresh right after harvest in October, fruit removed from storage in December had firmness 2 pounds higher than those just receiving ReTain alone. In order to get the maximum fruit benefit, Cortland need to be treated with both two full rates of ReTain followed by treatment with SmartFresh at harvest.

ReTain was first registered for use on apples in 1997. Because of its tendency to display excessive pre-harvest drop, McIntosh has been the variety most frequently treated in New England. The ReTain label has undergone some modification over this period of time. Because of this long use period, most growers have developed a program for use on McIntosh that is tailored for use in their orchard.

General comments and suggestions for ReTain use

The next Healthy Fruit will be published on or about August 14, 2018. (Maybe.) In the meantime, feel free to contact any of the UMass Fruit Team if you have any fruit-related production questions.