Thanks to our Crow Lady, Leigh Sexton, we have a history of Lee High Village, the original neighborhood association that was created in the 1950s when Village Drive and Leehigh Drive were first populated. The association grew and was extremely active for three decades. Some of our Village Drive Village members were once members and officers of Lee High Village.  But things were different in the 1950s, weren’t they? 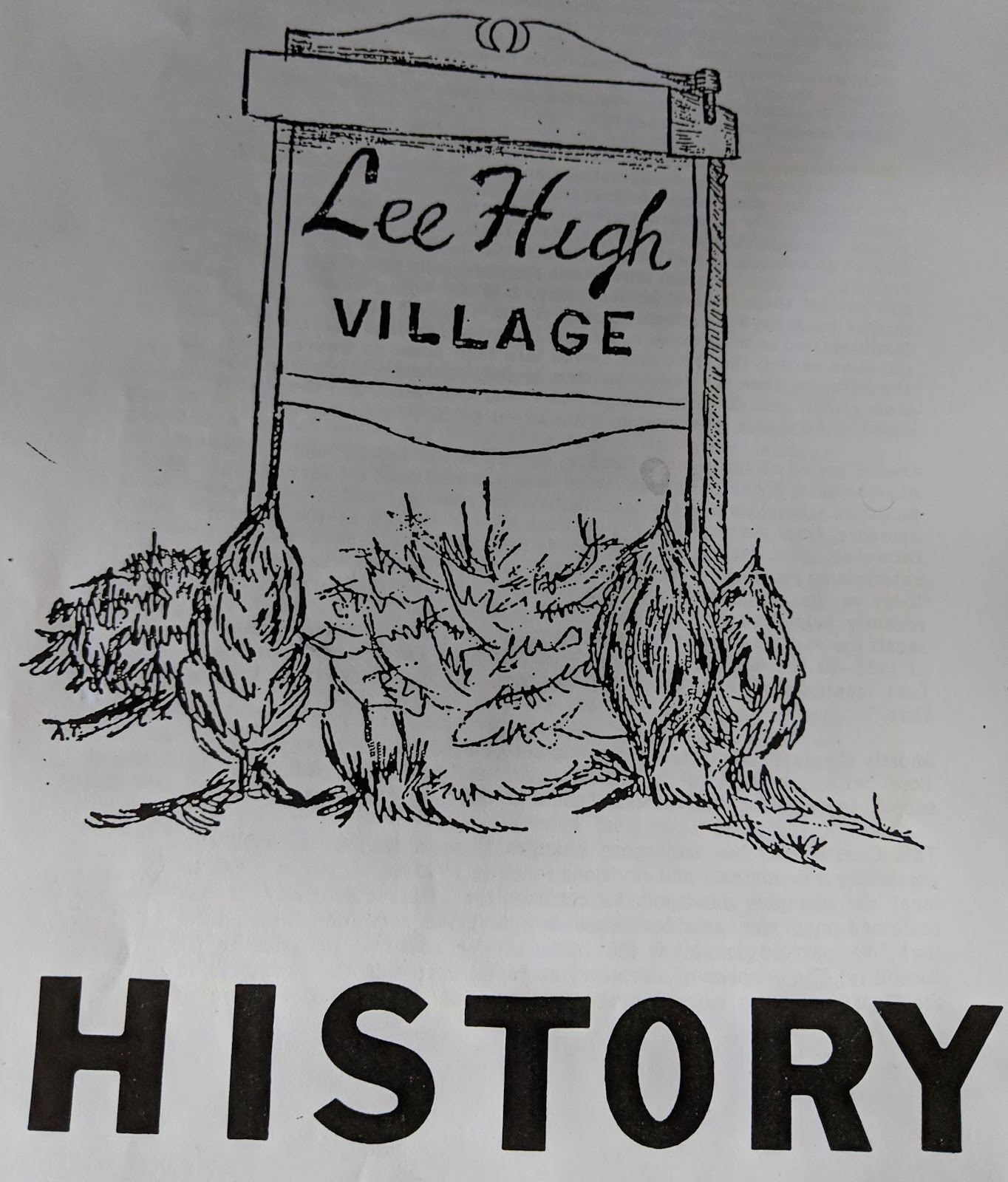 HERE’S THE SHORT VERSION OF THIS HISTORY BOOKLET (we’re adding footnotes for corrections and additions; contact news@villagedrivevillage.org for your memories. Carole Sarkuti, a former Lee High VIllage president, has another version of Lee High Village History, which is available on the Village Drive Village Group of Facebook, https://www.facebook.com/groups/2171882682863206/ .)

Lee High Village at first mostly catered to the many children who lived here, offering babysitting services, neighborhood games and parties, and many family activities. When the wells started to run dry, they fought for years and in 1972 finally got a water line installed down Village Drive. Then, for almost two more decades the neighbors banded together to fight for sewer services, and when that was finally achieved in the early 1990s, and the children had grown up and moved away, the Lee High Village Association gradually dissolved. In 1988 the association had 97 dues paying members. They had $3,000 in their bank account at the end, and they ended up giving it all to charity.

WHAT THE ASSOCIATION DID:

They had projects for “Mutual Welfare.”

In 1969 they developed a playground area at the end of Swarts Drive on 19 acres of unused property. They leased the property from the Catholic Diocese in Richmond for $175 a year.  Playground equipment was built by scouts, and everyone pitched in to clear the trees, cut weeds and tall grass, and build picnic tables[1]. This playground area was abandoned in 1978 due to some vandalism and drug abuse taking place, and in 1982 the county Park Authority provided the current park at the end of Village Drive adjacent to the Brentwood Community.

Also early on the list of “mutual welfare” were streetlights and road signs. The county made the neighbors pay for the streetlights themselves, so everywhere you see a streetlight today you can thank a small, contiguous group of neighbors who joined together to install and pay for their own lights. Road signs were even more difficult to achieve because the county told the Association that residents would have to put up their own signs, even pouring the concrete and setting the posts. The county did provide names for the signs, however.

Another achievement was a left-turn path at the intersection of Village Drive and US-29. The Association contacted VDOT in 1971 and got the turn lane, and then they were able to get it improved in 1986.

Finally, the Association got water and sewer for the neighborhood, as mentioned above, and TV cables.

They had projects for “Community Interest.”

Every year they printed phone directories for all of their members, providing the address and the names of all the children, their ages and even their interests, such as baby sitting. Every household got a copy even if they were not a due-paying member.

Newsletters were printed and distributed to everyone monthly, keeping residents informed of everything from activities to the latest county regulations for pets.

Neighborhood Watch was started in 1982 as a result of daytime burglaries, mailbox vandalism, pet killings, and a variety of minor crimes. The Brentwood Neighborhood Association joined the program in 1983. Ironically, the quick reduction in crime led members to abandon the program.

They had projects for “Protection of Property.”

Many times the community banded together to “fight city hall” -- to fight developers, lawyers, the planning commission and the Board of Supervisors to protect their property and the neighborhood as a whole, and their history shows that in most cases they were successful.

They prevented a sewage plant from being built on property off Lee High Drive.

They successfully fought the Water Authority who wanted to change the zoning so they could expand storage and shop facilities.

They had projects for “Social Welfare.”

The Halloween Parade was a very popular event with as many as 100 children taking part, a tradition which continues today sponsored by the Brentwood Neighborhood Association.

The Association was very active at Christmas and they decorated their own tree at the entrance to Village Drive, next to the sign “Lee High Village” which they had erected in the 1950s. They also held “adult Christmas parties” which changed to January “winter parties” and then disappeared from the calendar entirely by the late 1970s.

The Easter Egg Hunt was popular and prizes were awarded to children who participated, but as the children grew older the event faded away.

An adult bingo party was held at the home of a member in the spring. It was preceded by a covered dish supper. Prizes were furnished by local businesses. It remained one of the most popular events until the end of the association.

The fourth of July family picnic started in the mid 1960s and was a huge success. In 1974 more than 150 people attended. They were always held in the backyard of a member and included sack races, egg tosses, water balloons, and great food.

Lee HIgh Association tried a teen club for about five years, but it didn’t work out.

Fundraisers included yard sales at the entrance to Village Drive where profits from donated goods would go the association treasury. That soon changed to a special date when everyone would hold their own yard sale and keep the profits themselves.

DO YOU HAVE A STORY ABOUT ANOTHER NEIGHBORHOOD ASSOCIATION? Maybe you have experience in other neighborhood associations that you can share with us. If so, we’d love to know about it. Neighbors don’t band together as much today as they used to. Some HOA’s have become hated institutions which over-regulate homeowners, and many neighborhood associations have dissolved for one reason or another. Maybe a little history can lead us to a renewed commitment to each other in Village Drive Village, which includes Birchtree, two Brentwoods, Buckner Forest, Forest Hills of Fairfax, Glen-Alden, Huntwood Estates, Huntwood Manor, Kiels Gardens, Lee Pines, Piney Branch, Novak, Avenshire Subdivision, and the former Lee High Village.

[1]  Ray Cramer provided these details about the Swartz Drive playground the Lee High Village Association built : I was president of our local civic association in 1969 or maybe it was 1970. It all got started when Mr. Christel and I went to Richmond to see a Priest of the Catholic church. We wanted to lease a small portion of their land at the end of Swartz Dr. The priest we negotiated with did not want to lease the plot of ground but he preferred that we promise a substantial annual donation, and we could use the plot of ground we wanted. I don’t remember if we had anything to that effect in writing, but I suppose we did. I believe the name of the Fairfax County supervisor for this district was a lady named Elaine McConnell. Someone, and I believe it was probably Mrs.McConnell, helped me get in touch with the Army at Ft. Belvoir, and they provided a bulldozer and operator, and he cleared off the trees and shrubbery in just a few hours. I also remember that I had quite a discussion with someone from our county who wanted me to hire a professional engineer to work up a plan or program concerning the soil erosion and runoff. I finally convinced them that we should not consider that as a requirement. A couple of our local boy scouts made projects out of contributing to the facilities, a gate to keep vehicles from driving on the property and a swing set. This required quite a bit of metal which I got from a junkyard near Lorton, and cut and welded up these items for them. Later on, someone made a picnic table, but I don’t remember who that was.

Of course, this playground became a hangout for an undesirable group of drug users, and the civic association wisely decided to not claim use of the facility anymore.