In recent years, hundreds of college courses have switched how they grade programming assignments, from grading manually and/or using batch scripts, to using commercial cloud-based auto-graders with immediate score feedback to students. This white paper provides data on the rise in usage of one of the most widely-used program auto-graders, zyLabs, as one indicator of the strong shift in college course grading to the auto-grading paradigm. The number of courses, instructors and students using zyLabs have increased dramatically since it was first introduced, such that from 2016 to 2020, the number of courses per year grew from 284 to 2,175, the number of students per year from 24,216 in 2016 to 132,121 in 2020, and the number of instructors per year from 364 to 2,866. The result is a substantial shift in the classroom dynamic that enables instructors and students to spend more time on quality teaching and learning.

In the past, most courses graded student programs by hand. A student would develop the program on their own, and then submit that program on paper or as online files. A teacher (instructor or teaching assistant) would grade each program's runtime correctness and often the code quality, providing written feedback. Human grading's main benefit is high-quality feedback, especially regarding code-quality (style, problem-solving approach). But drawbacks include extensive human resource usage, which is expensive and detracts from other high-value contributions that teachers could make, and a delay of days or weeks before students get feedback, which can hinder learning.

Today, many courses use a cloud-based auto-grader. Students submit their programs to a webpage, which in seconds gives feedback on the program's runtime correctness along with a score. Students can then resubmit to improve their score. The benefits include reduced human resources and immediate feedback to aid learning. Drawbacks include little or no feedback on coding style, potential student overreliance on the auto-grader to test programs, and potential cheating of the auto-grader. Some instructors combine manual and auto-grading, letting the auto-grader provide an initial score based on runtime correctness, and then later manually adding a score based on code quality.

This white paper provides data detailing the growth and usage of the zyLabs auto-grader.

zyBooks was founded in 2012 to improve learning content in introductory CS courses. Its initial product in 2013 included a web-based textbook replacement created natively for the web, thus using less text and instead using 100+ animations and 1000+ interactive learning questions. An integrated homework system was added in 2014, consisting of short auto-graded coding challenges, where students complete a program by writing about 3-10 lines of code, or determining the output of a given program.

Figure 1 shows the number of course offerings that adopted a zyBook with zyLabs enabled, per year since 2016. A course offering is a delivery of a course in a given term, such as "CS1 at Univ. of Springfield in Fall 2016". zyLabs adds an extra cost beyond a base zyBook's cost, and thus courses with zyLabs enabled almost always make use of the zyLab auto-grader. For all figures in this document, courses are included if at least 9 students were subscribed to that course.

Figure 3 shows the number of instructors teaching classes using a zyBook with zyLabs enabled, per year. As multiple instructors might teach the same course, this number is larger than the number of courses shown above.

Figure 4 shows the proportion of zyBooks in C, C++, Java, and Python courses that have enabled zyLabs, per year. The proportion has been increasing, such that now significantly more zyBooks have zyLabs enabled.

Figure 4: Instructors teaching C, C++, Java. Or Python courses using a zyBook with zyLabs enabled and not enabled, per year.

Figure 5 below shows the average number of zyLab programming assignments used in a course offering. We consider a zyLab as being "used" if at least 5 students submitted programs for grading. We also calculated the average number of zyLabs programming assignments used per student, and the numbers were the same as those used in a course offering. 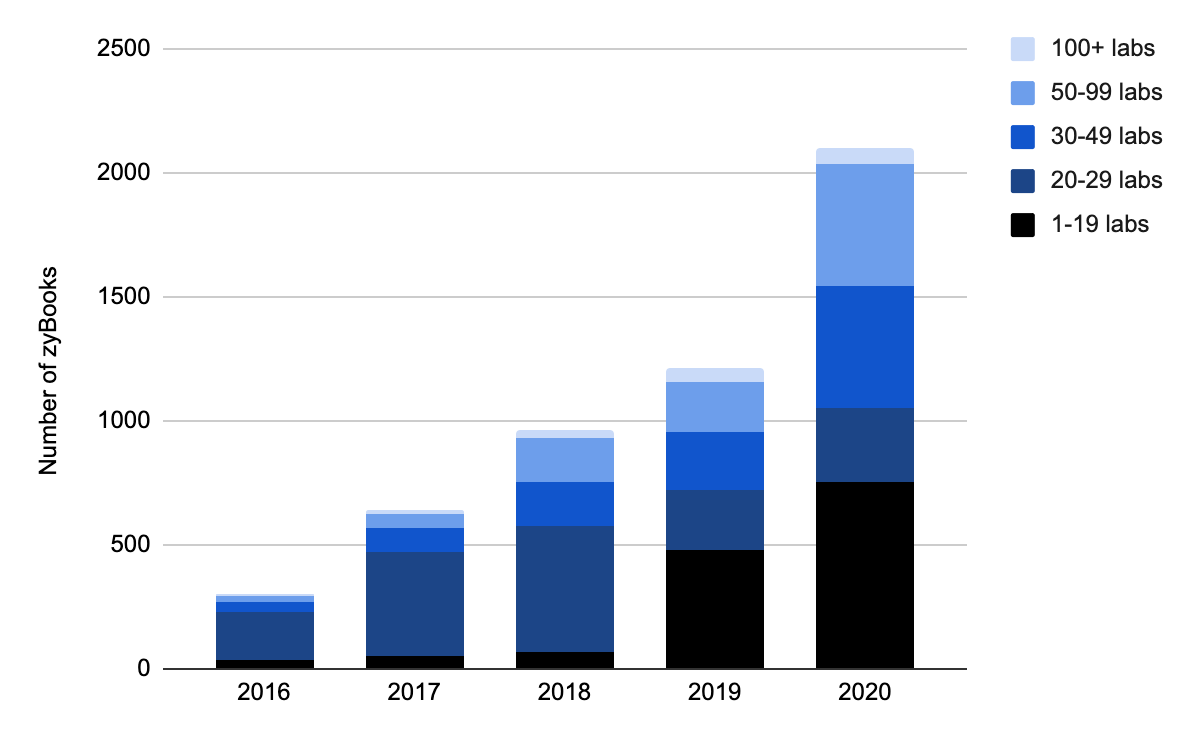 Figure 6: Distribution of approximate number of zyLabs used by instructors each year.

Figure 7 shows the number of submissions made to the auto-grader per year. The figure shows that not only are the number of zyLab programming assignments per course increasing, but the usage of those assignments is increasing as well. 2020 saw a dramatic 2.4x increase in usage.

Figure 8 shows the distribution of the number of non-comment lines of code in the instructor solution to auto-graded assignments in one term, Fall 2020. The auto-grader has been used for assignments that range from 1 line of code to 780 lines of code in the instructor's solution, with a median of 24 lines of code. (Note: Some solutions might include template code provided to the student). One can see that the auto-grader can be used for small to large programs (in the context of CS classes), with over 1,000 programming assignments being for programs with 100+ line solutions. Figure 9 zooms in to the larger programming assignments, some of which have more than 400 lines of code. 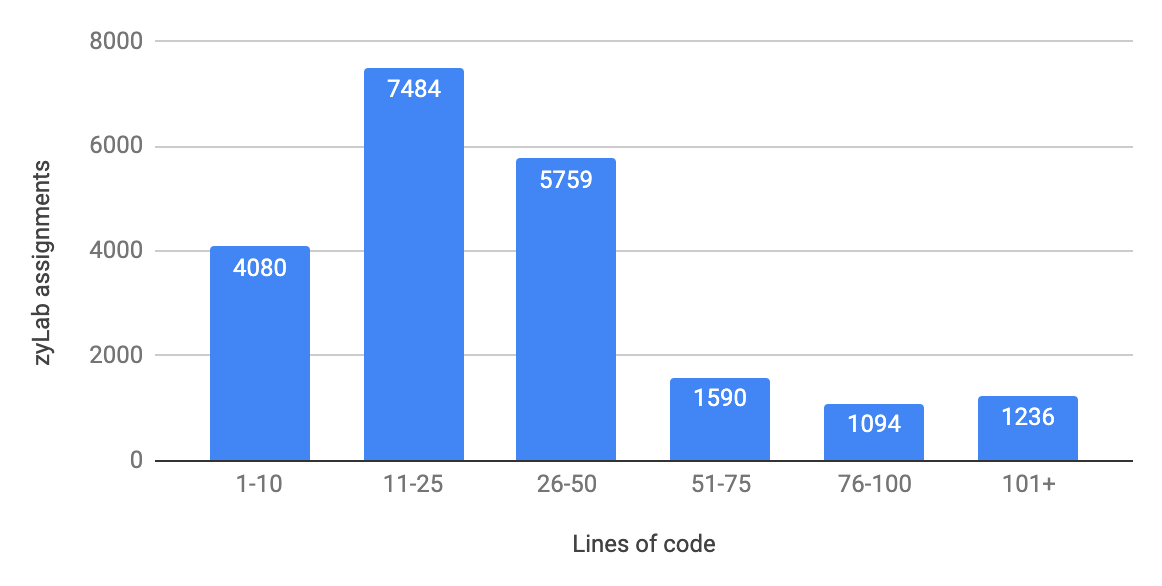 Figure 8: Distribution of solution lengths for auto-graded assignments in Fall 2020. 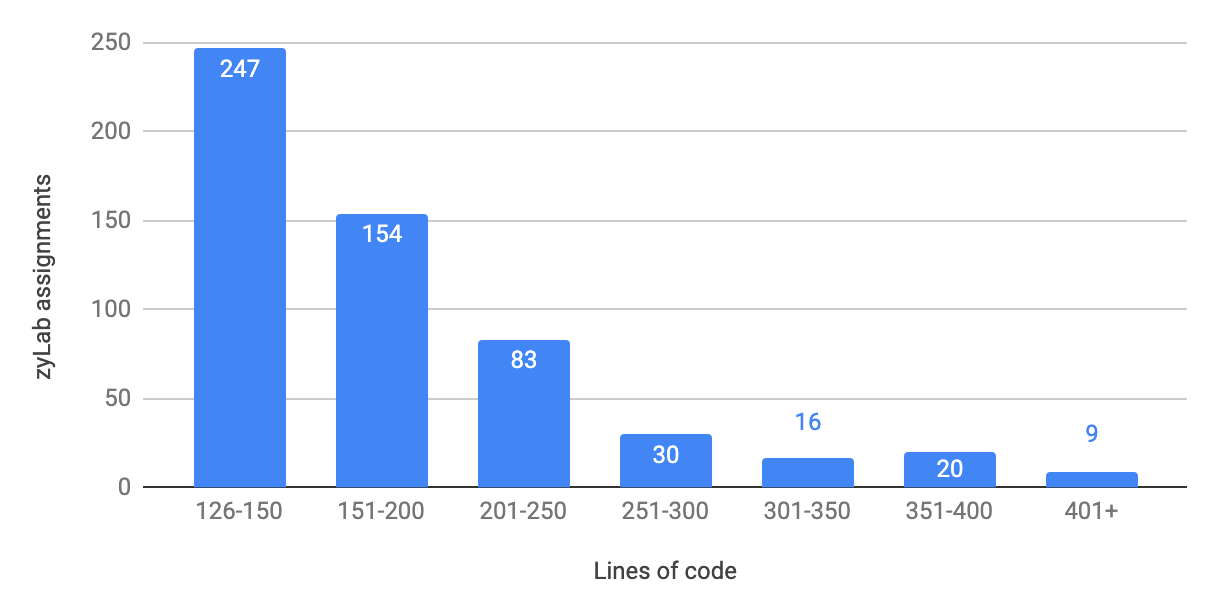 Develop runs (coding in the book)

Instructors have the option to enable a develop mode for zyLab programming assignments. When enabled, develop mode allows students to write and run their code within the zyBook as often as they choose, before (and after) submitting the assignment for grading. Instructors who do not enable develop mode have students use other tools to develop code (IDEs -- integrated development environments). Figure 10 shows that develop mode is enabled for over 80% of auto-graded zyLabs. The percentages were similar for each programming language in labs used in 2020: 83% for C, C++, and Python, and 80% for Java.

To understand how the zyLabs auto-grader is changing the classroom, zyBooks surveyed instructors who used zyLabs during Fall 2020 semester. A self-selecting sample of 116 instructors using zyLabs responded.

Figure 11: Number of instructors using various methods of grading prior to switching to zyLabs

Figure 12: Reported number of minutes that instructors saved per student each week on grading after switching to zyLabs.

Figure 13: Reported number of hours saved each week on grading after switching to zyLabs.

Figure 14: Reported change in time that students spent on programming assignments each week after switching to zyLabs

The data above shows a steep rise in courses using the zyLabs auto-grader, growing from zero to over 2,000 course offerings in just a few years, used by over 130,000 students in 2020. In most cases, courses switched to zyLabs not from another auto-grader but rather from manual grading. The auto-grader is used for small and large programs. Thus, this growth suggests substantial changes in the nature of programming courses:

We note that part of the steep rise in 2020 in particular was due to the COVID-19 pandemic, where most courses were suddenly being taught online. Many instructors quickly adopted zyBooks that year, stating the increased need for better quality learning outside of class.

These changes illustrate a future with a much different classroom dynamic. The role of instructors shifts away from grading and more towards educating. This shift may also shape the way that students see instructors, seeing them less as their testers/assessors, and more as their aids/educators.

Immediate feedback focuses on correctness rather than style or approach. As such, auto-graders might promote poor coding style/approach. This issue can be addressed by instructors complementing auto-grading with manual grading of at least some programs, which requires far less time than full manual grading.

Thinking of how to test one's own code is an important part of creating good programs. Auto-grading may reduce students' focus on testing their own code, with some students over-relying on the auto-grader. This issue can be addressed by future techniques that require students to create their own test cases before submitting for auto-grading, and even auto-grading the quality of those test cases.

Commercial program auto-graders are relatively young. Looking forward, some improvements may include:

In summary, the data suggests that auto-grading is a major trend in programming courses, with continued rapid growth and increasing usage, which can positively transform class pedagogy. The maturing of auto-graders means that new higher-level tools and techniques may begin to grow in coming years.