Cars slow down on Village Drive to get a better look at the newest crow perched on top of Jean and Chris  Allen’s mailbox. Neighbors come by in wheelchairs, on foot, on bikes. The whole neighborhood beyond Village Drive, hundreds of houses, has smiled at some point at the many lives of the crow. That’s been going on for about 14 years, and if it stopped now for any reason an entire neighborhood would be saddened. 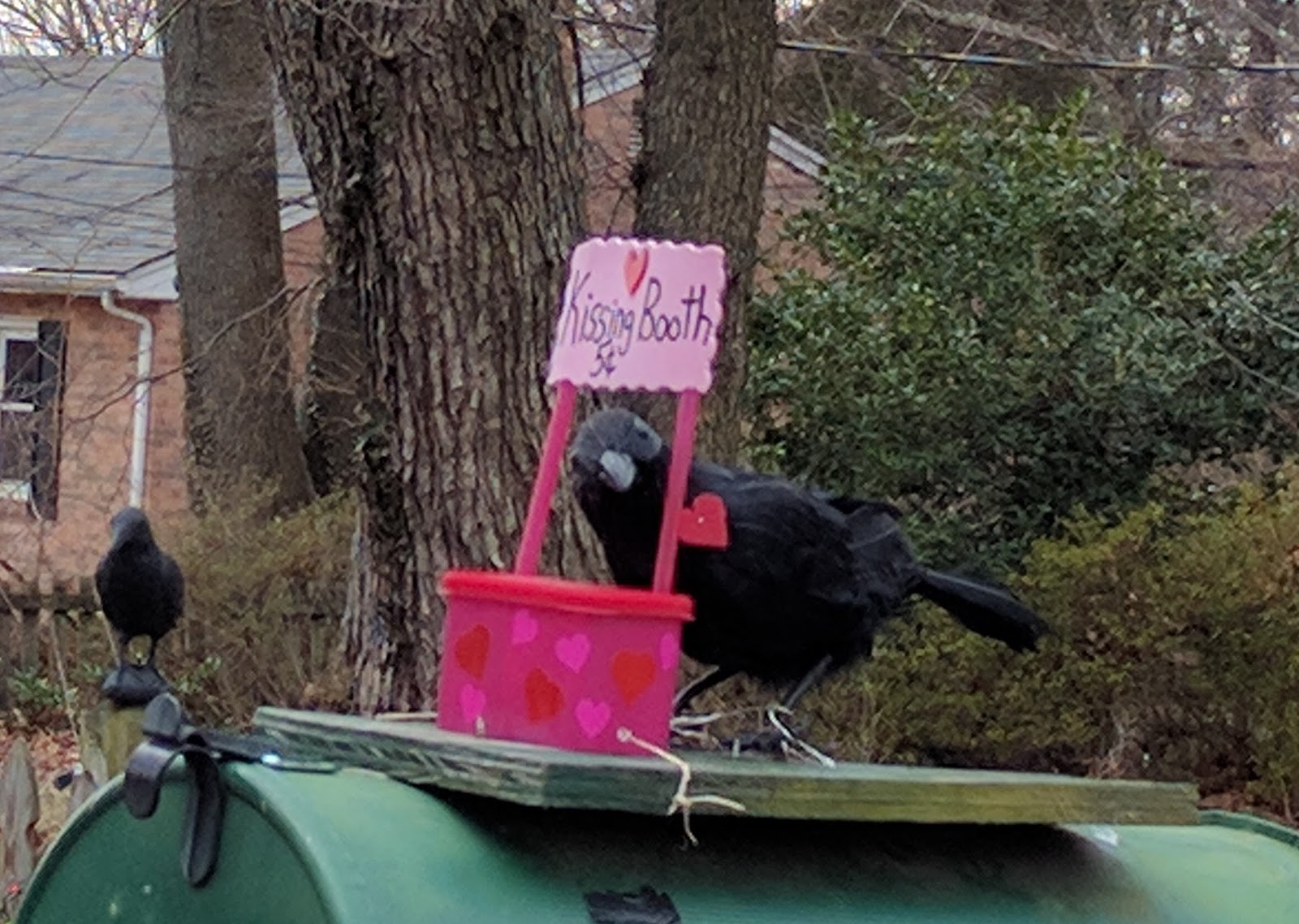 Jean and Chris  have kept a neighborhood tradition alive. Jean really likes crows, so she put one on her mailbox just for decoration. This was so long ago she isn’t sure when. Back then, a neighbor who lives two blocks away with an infectious sense of humor, Leigh Sexton, and her artistic daughter Lorna, started a tradition.

Lorna told her mom that the crow needed a Santa Claus hat.  Then a few months later, Lorna thought the crow needed a special hat for St. Patrick’s Day. Mom and daughter started brainstorming new creations that they continued to this day to put on the crow in the middle of the night when no one was watching.

Jean had no idea for two years who was decorating her crow, or why. She Googled “crow decorating” to find 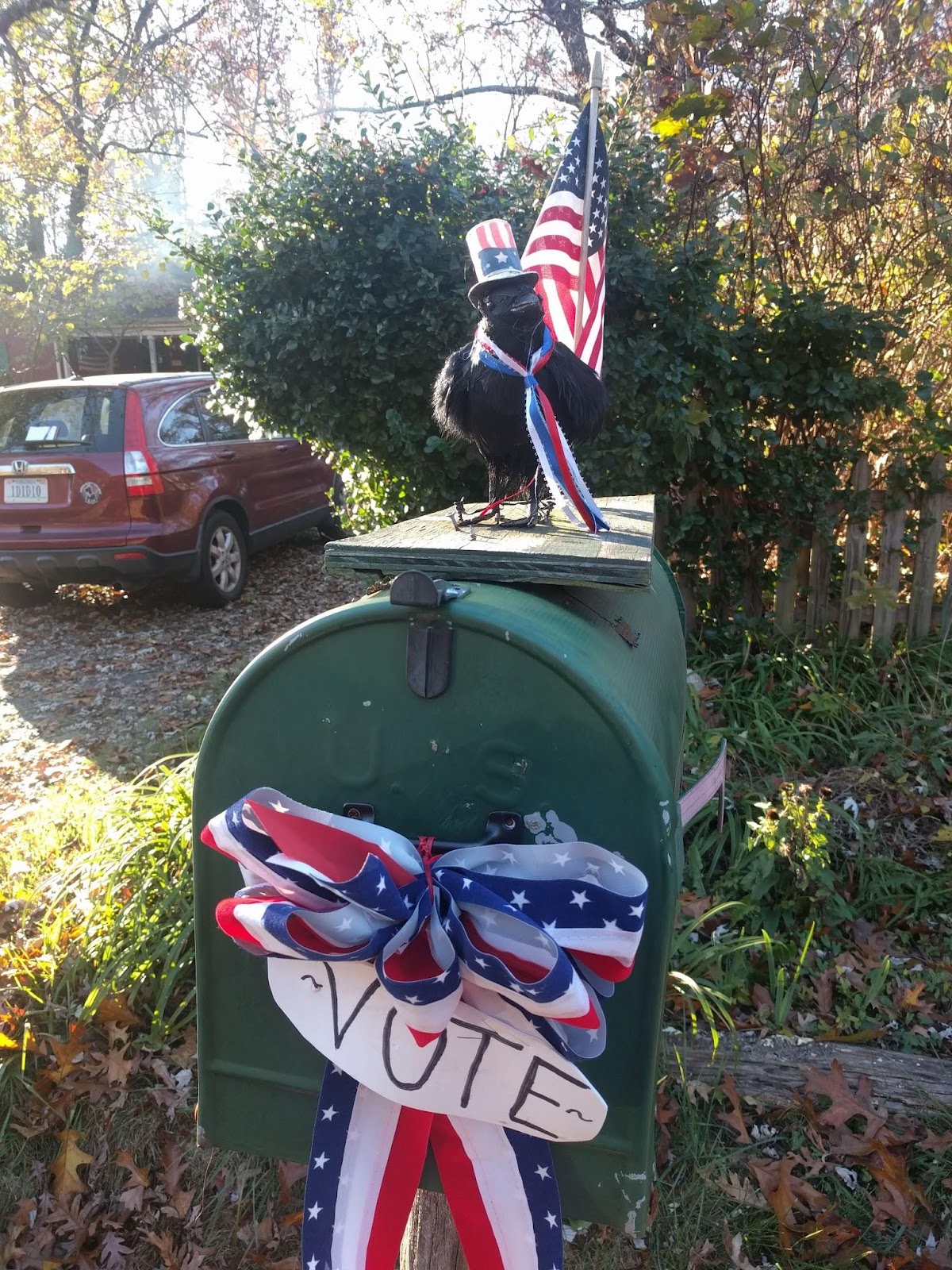 out why, but Google returned nothing. She just couldn’t figure out who was doing it. Leigh and Lorna had kept a really good secret until Jean’s daughter, Emma, became a Girl Scout.

It turned out that the Scout Leader was Leigh Sexton, and when Emma and Jean met Leigh for the first time, Emma said: “I live in the red house with the crow on the mailbox.”

Emma said: “Someone decorates the crow.”

By now, Leigh could barely contain herself. She is laughing as she says: “I know. I’m the person who comes in the middle of the night to decorate the crow.”

At that point, the whole project became a joyous venture shared by two families. They teamed up to create costumes. The two creative mothers have continued the tradition all these years.

The crows aren’t alive, but they do bring life to the neighborhood with their regular costume changes. Eyes glowed at night in a Halloween spider costume. The crow urged people to vote in November. It sheltered under a raincoat during the hurricane. It would be impossible in one story to list and show pictures of 14 years of crows, but there are a whole lot of pictures of them at the end of this story.

When Jean (left) and Chris got married,  Leigh (right) created wedding crows as a special surprise. Of course Jean keeps the wedding crow couple in a safe place, and she is happy to bring them out to show them off. The two happy crows still look like new. 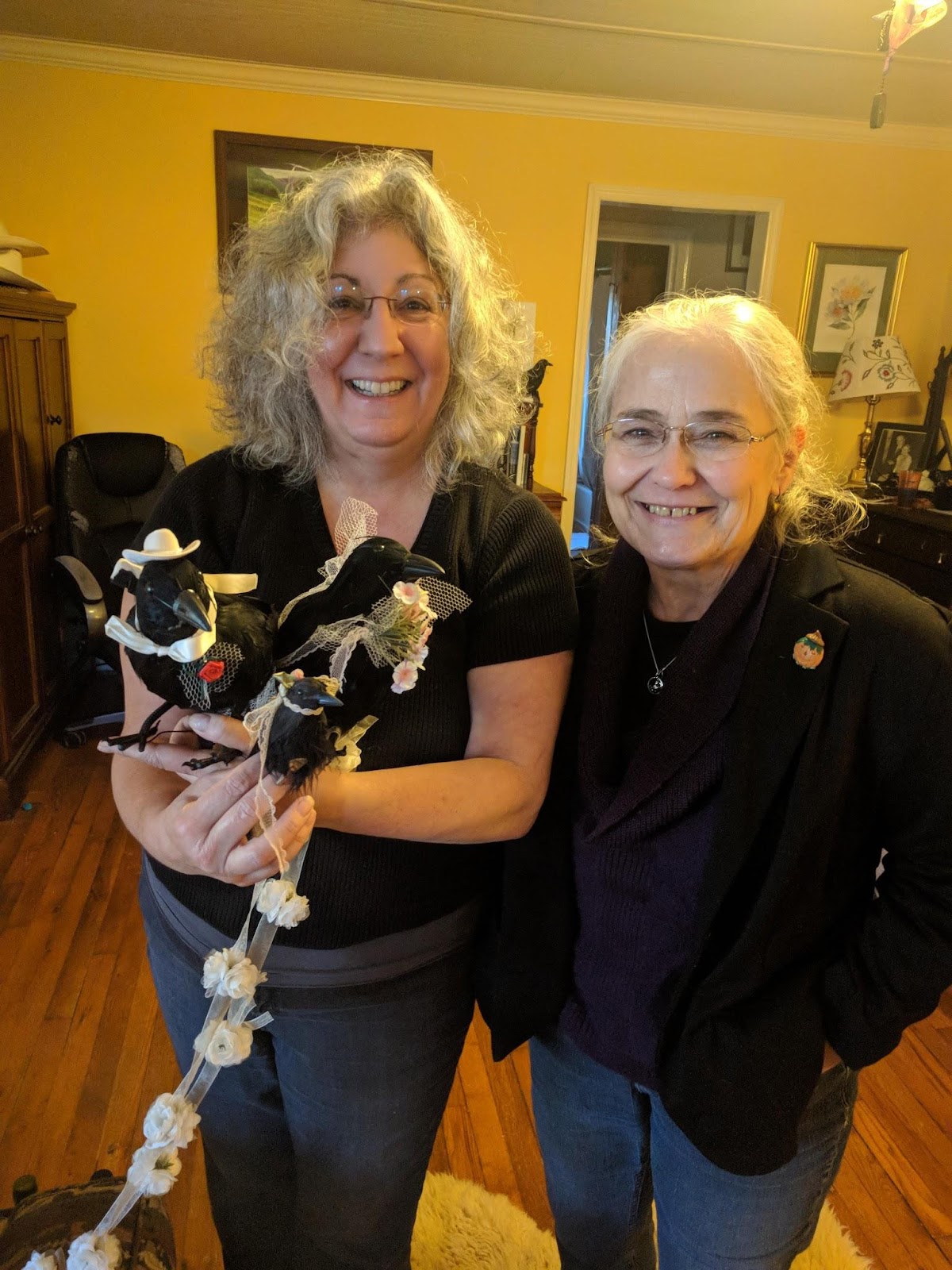 But crows left outside do suffer. One was stolen and Jean received sympathy cards from neighbors. One was hit by a car that knocked down the mailbox, and of course the next decoration was a crow with a major bandage, and a sign that said: “I’m alright! I’m alright!”

For the less fortunate crows, whose feathers are disappearing or damaged by freezing rain, there is a very special resting spot, a big honeysuckle tree by the driveway. Here, the old crows enjoy privacy, away from the spotlight, hidden in the foliage, seen only by their family.

Crows receive mail. In fact, Jean claims they get more mail than she does. After all, the address is on the mailbox. They’ve gotten postcards from all over the world from someone who travels and signs them “your friend,” someone no one knows who.  Letters and best wishes from the neighborhood are regular.

Pictured here  is an example of a postcard from Budapest, Hungary. The stack of postcards is too big to list. 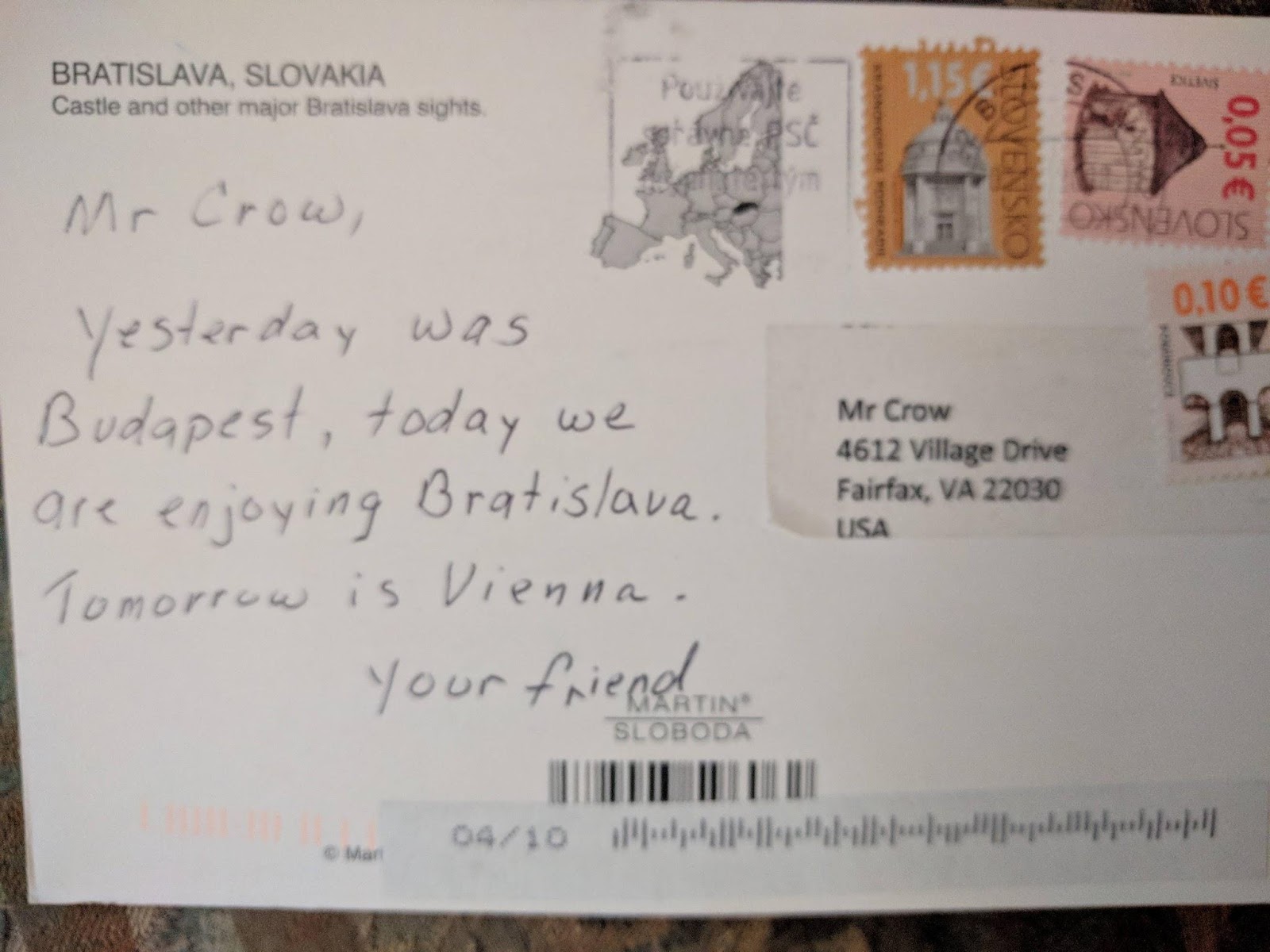 Why would Leigh put costumes on the crow on a mailbox of someone she didn’t know? Because it was fun. Because she has a sense of humor that won’t quit. Because her equally creative daughter thought it was a good idea.

This kind of neighborhood nonsense, shared with great pleasure by everyone, is a perfect reflection of the wonderful neighborhood they live in. It’s full of folks who have lived there more than 35 years, like Leigh, who are happy to welcome newcomers.

When people move away, they often bequeath small items for the crow to wear or hold.

Where can you buy a crow?  Michaels and the Party Store have them. Leigh doesn’t skulk around at night to decorate any more. She has a couple of crows and decorates at home, then swaps out the crows.

And their daughters, Lorna and Emma, what about them? Anyone could guess that they’re both artists; one is a photographer and the other is in art school in Richmond.

Here are a few more crow photos from past years: 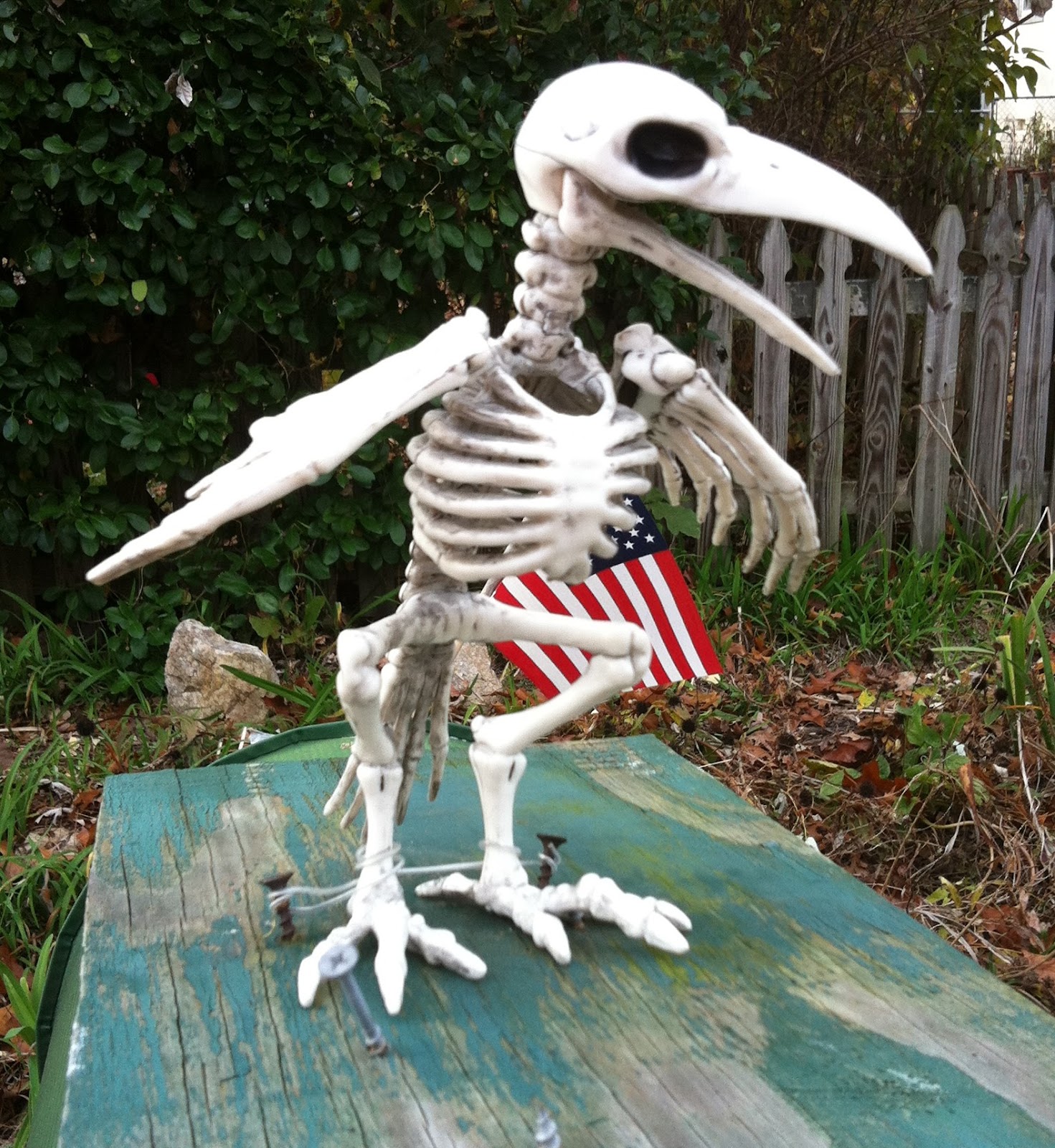 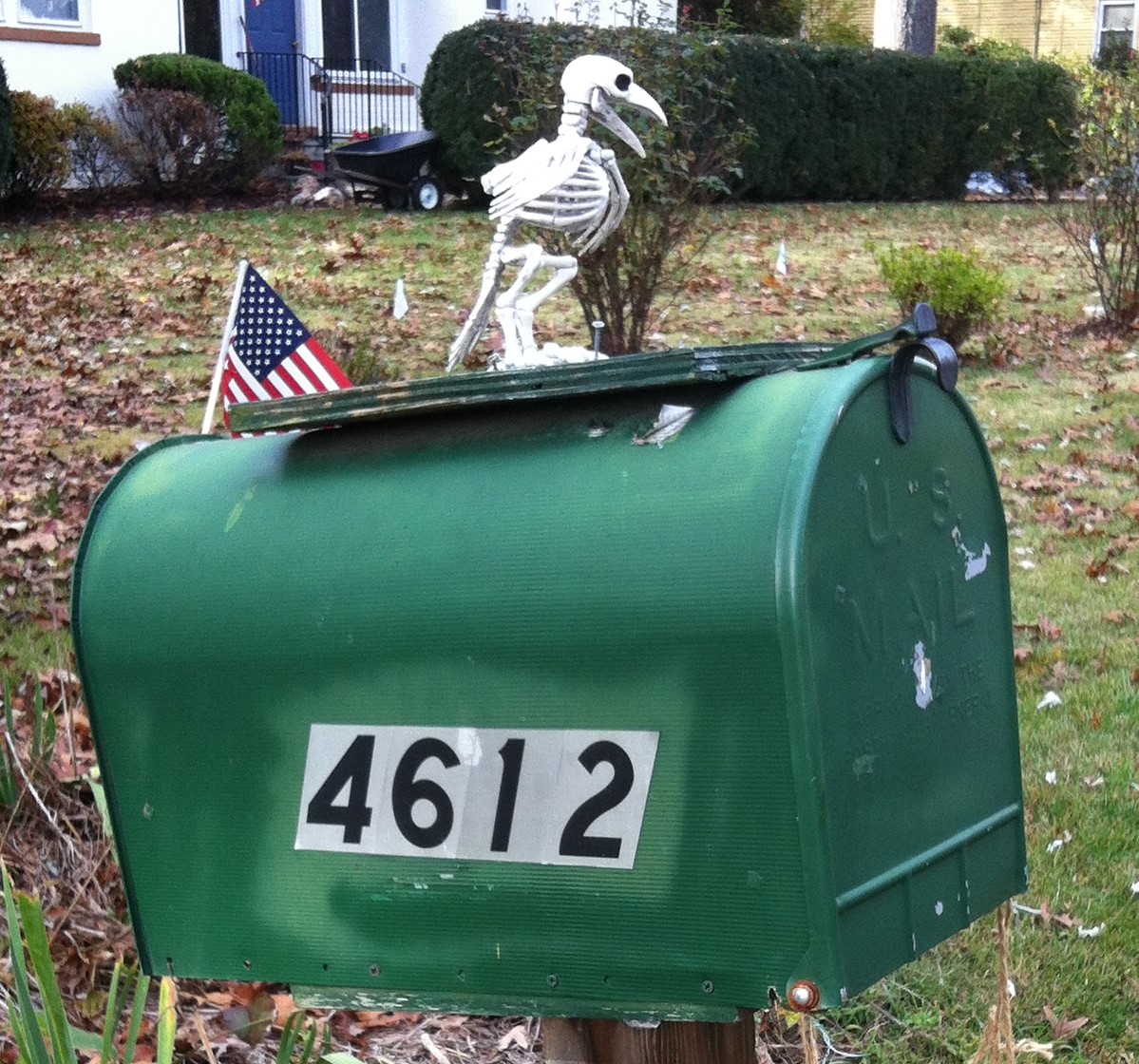 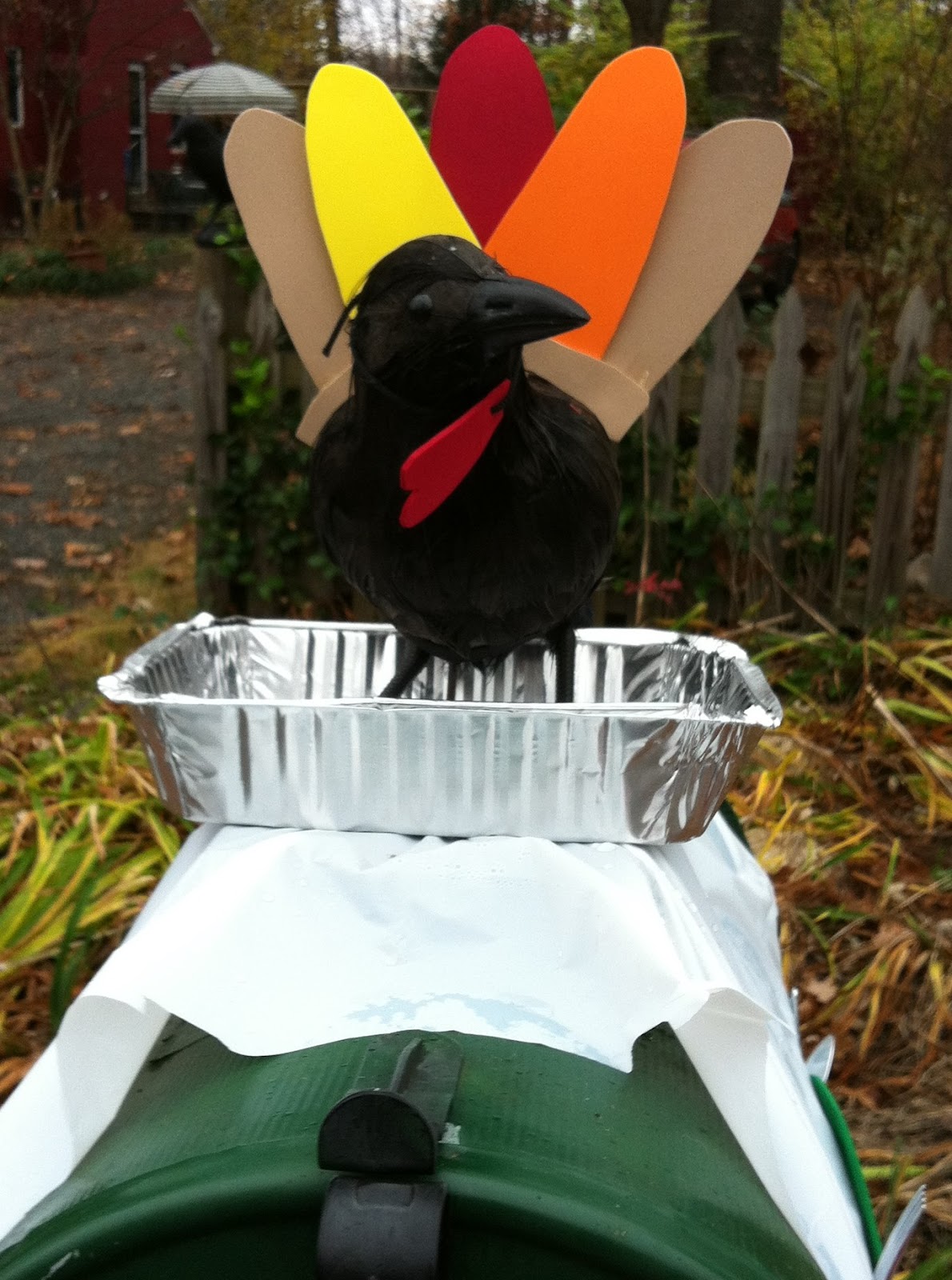 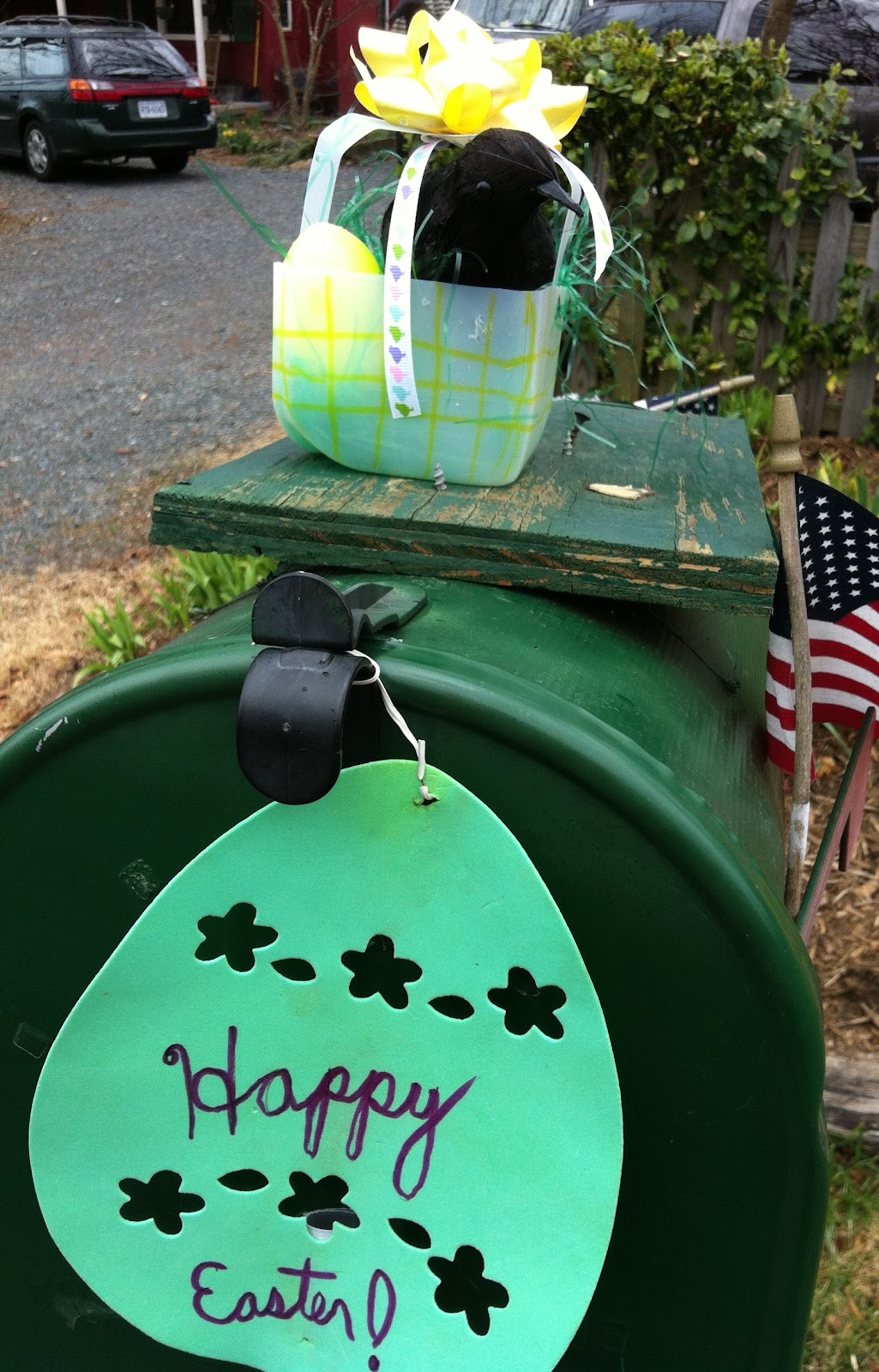 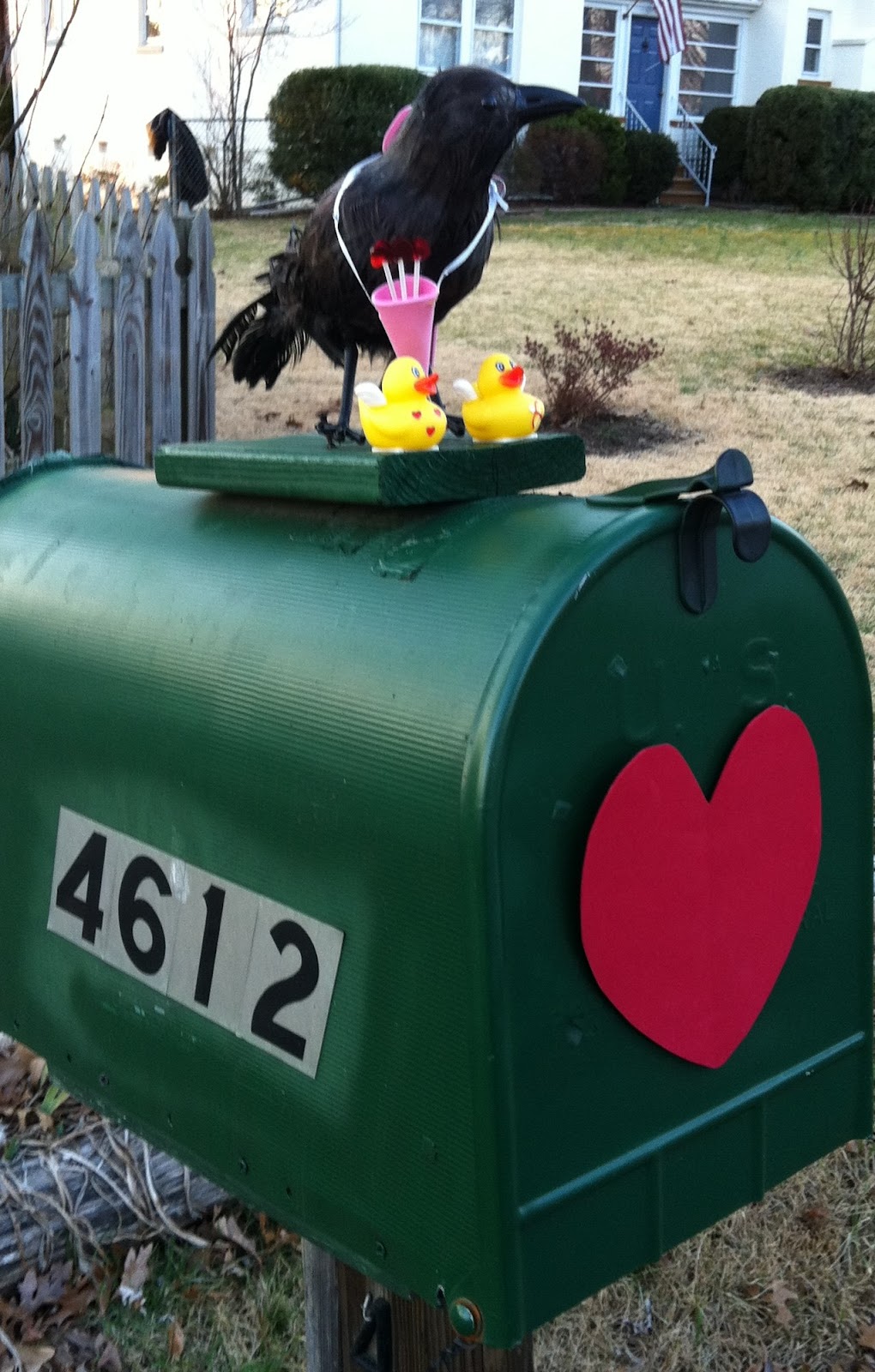 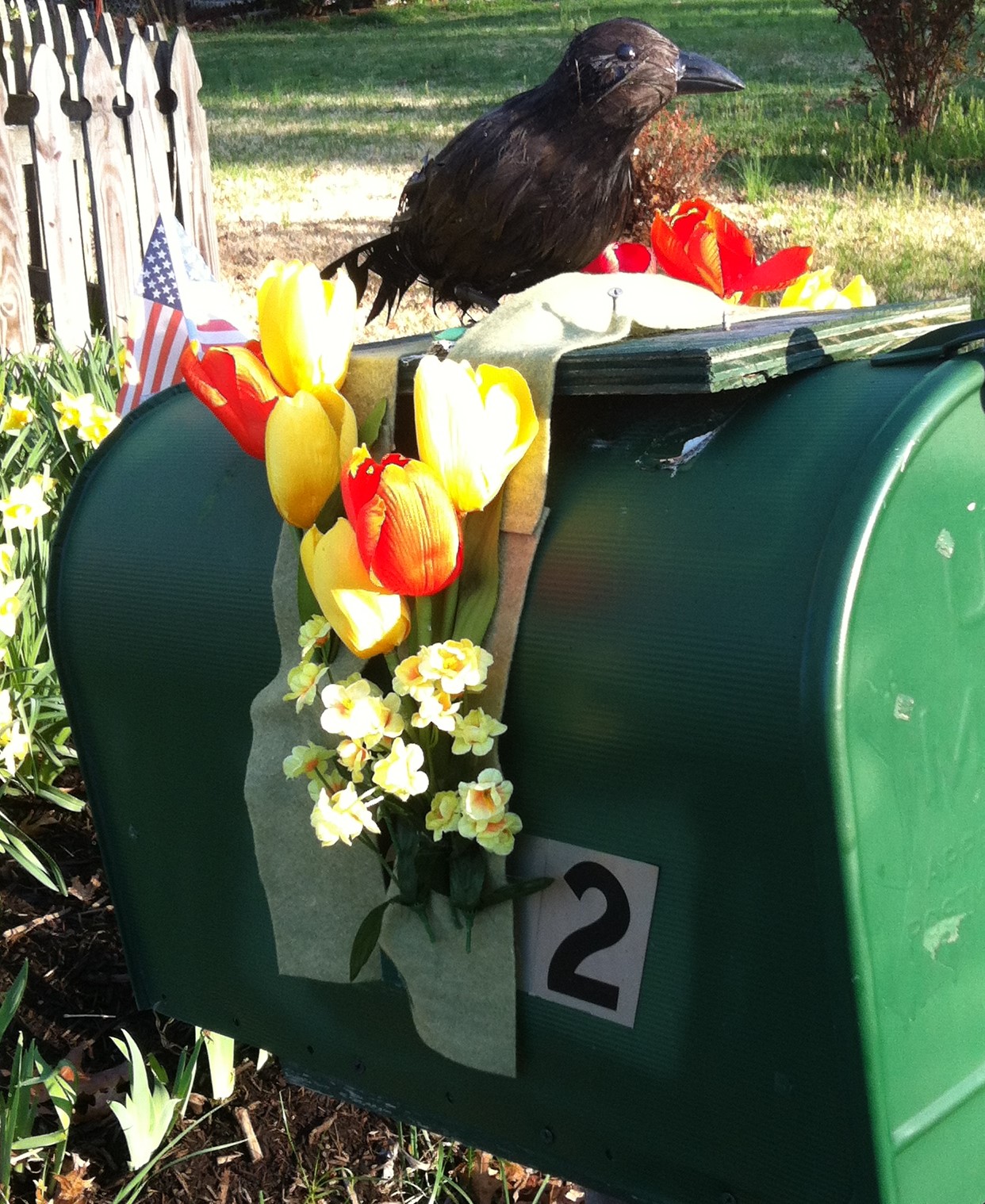 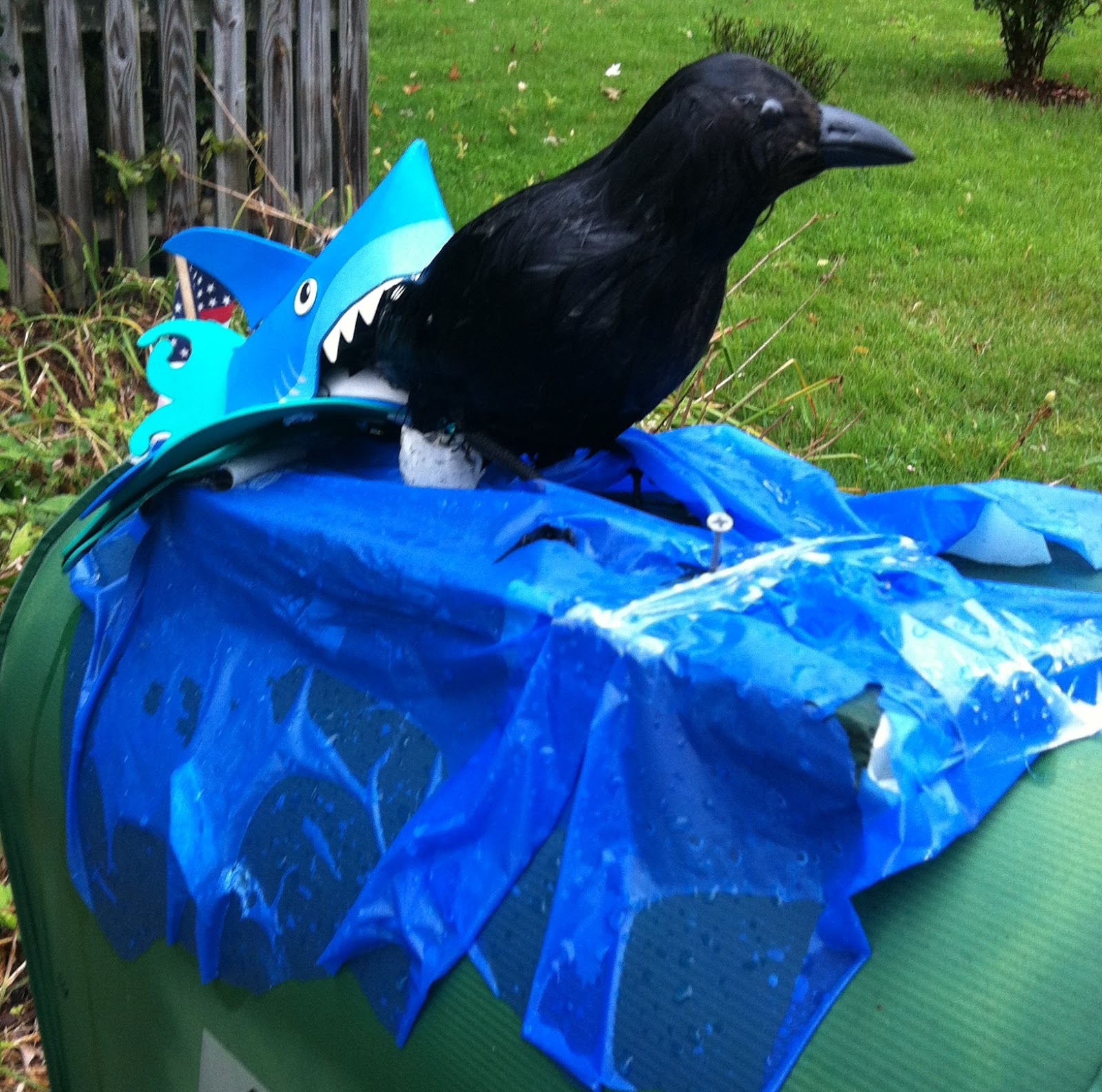 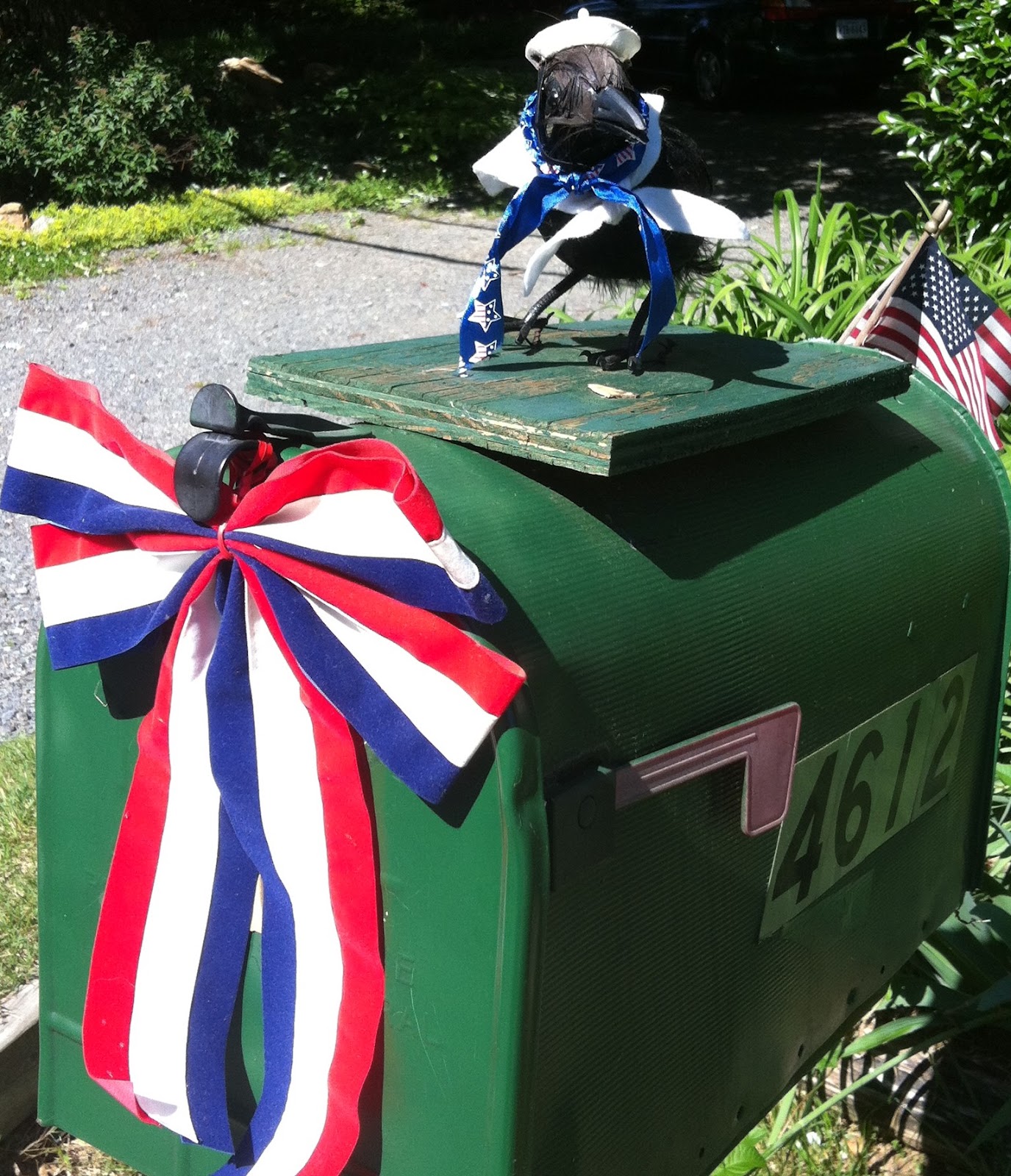 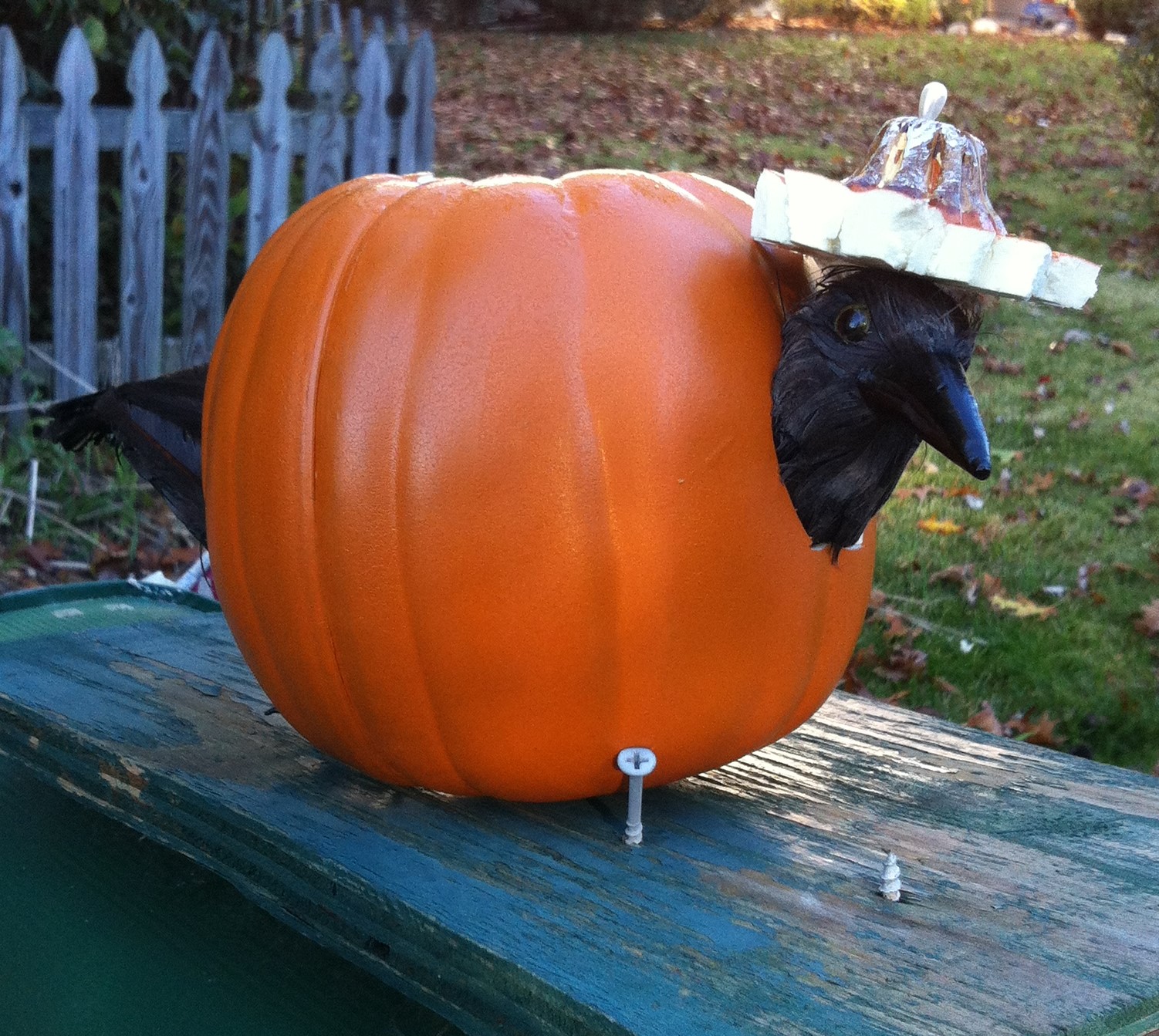 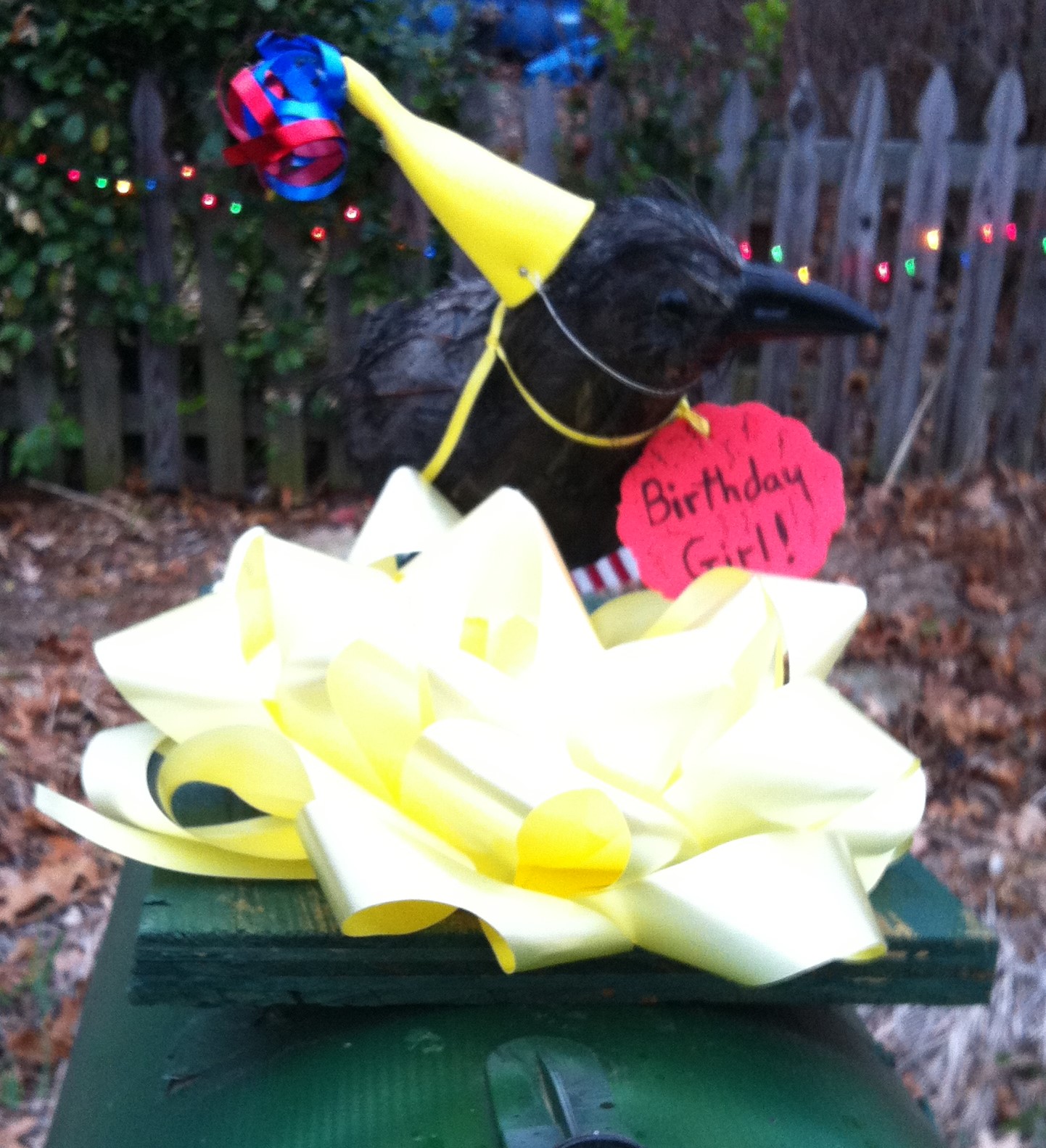