Running power can be broken down and even analyzed by its various components.  Andy Coggan, PhD was the first to present a methodology for analysis of power components from in-the-field athlete power data generated by Stryd running powermeter.

Dr Coggan originally presented the following slide, wherein he depicts his adaptation of a graphic developed by Hoogkamer, Taboga, and Kram, which depicts the various metabolic costs of running and their corresponding power components. 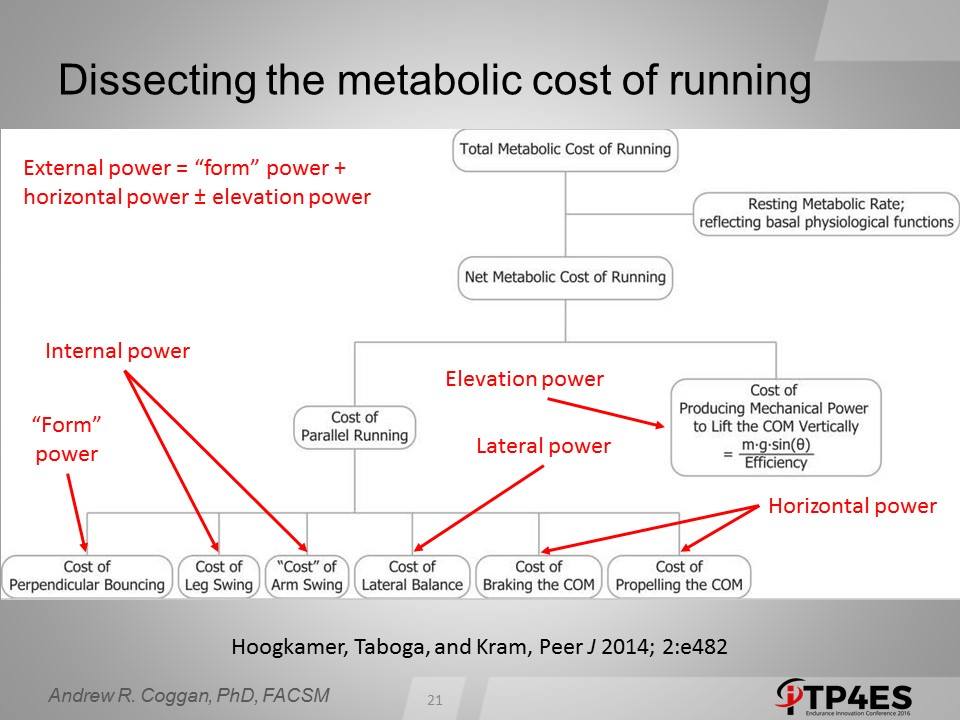 On flat terrain, such as a track, there is essentially no elevation power that is required.  Therefore, on flat terrain, Stryd power minus Form Power approximates horizontal power (GEP-FP = Stryd HP).

Due to stability issues with some data channels used to calculate HP, OP, and EP, I use Stryd Power (GEP), Form Power (surrogate for OP), and Stryd HP for analysis of power components on flat terrain.   Further, I prefer to analyze power components on flat terrain in terms of percentages of GEP.  Specifically, Form Power as a percentage of GEP, and Stryd HP as a percentage of GEP.   FP/GEP = FP%   and (GEP-FP)/GEP = HP%

The following is a conceptualization of GEP and its components on FP% and HP% (on flat terrain) as vectors. 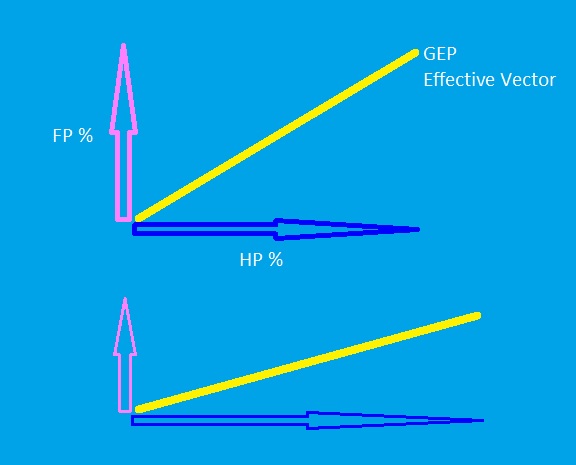 GEP (yellow line) can be broken into a vertical vector (FP%) and a horizontal vector (HP%).  If GEP (Stryd power) is held constant, within theoretical limits, it is likely that a higher percentage of horizontal power translates to more power moving the athlete forward, and consequently  more speed.

Another way to look at it would be how do runners run faster?  One method would simply be to generate more power.  However, why not both, generate more power, and mechanically apply the power such that a greater percentage is more horizontally directed (lower graphic in above figure).

In reality, this second scenario is often seen.  The following is a scatter plot of power and power components vs speed from a 10,000m race.  The yellow line is Stryd power (GEP), the blue line Stryd HP, and the pink line Stryd FP. 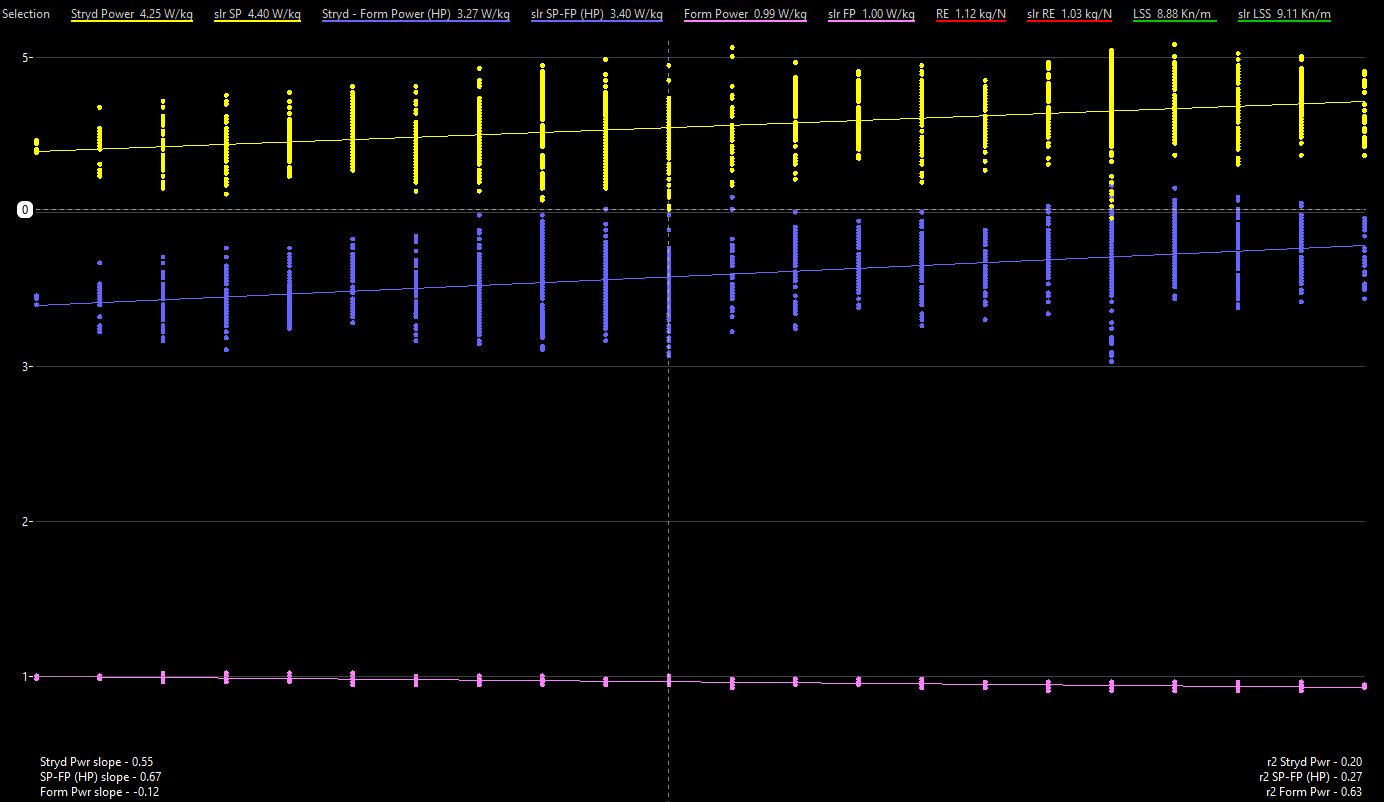 The following is the same scatter plot or power and power components vs speed, but now from a 1600m race.  The same relationships exist. 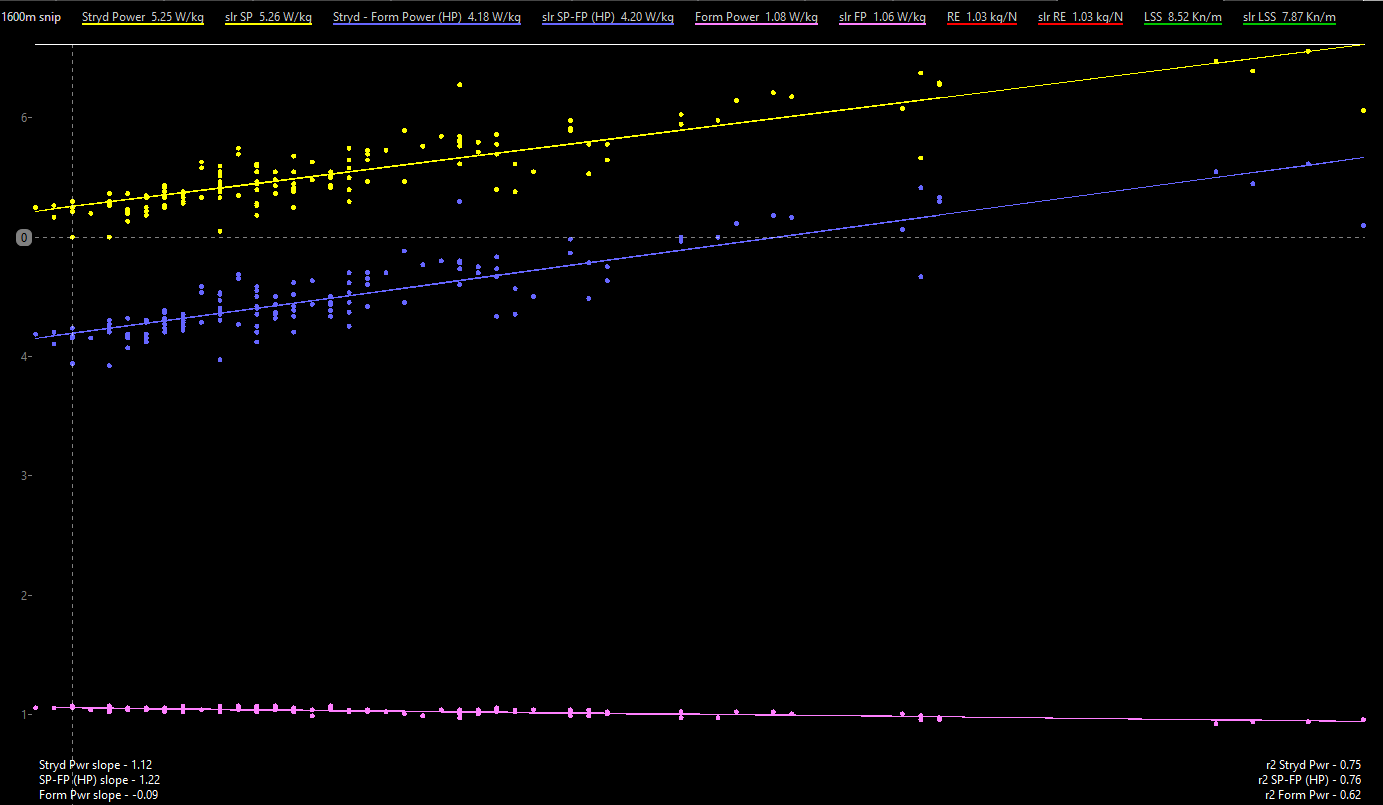 And still another way to see the relationship (figure below): This time from a different 1600m race, wherein the runner was to run the first 1000m well off the pace, then attack hard over the last 600m, reeling in as many competitors as possible.  In the top chart both power (yellow line) and pace (blue line) are plotted over time.  The bottom chart plots HP% (top line) and FP% (bottom line) over time.  The vertical scroll line (dotted) lies on the point where the last 600m segment begins. 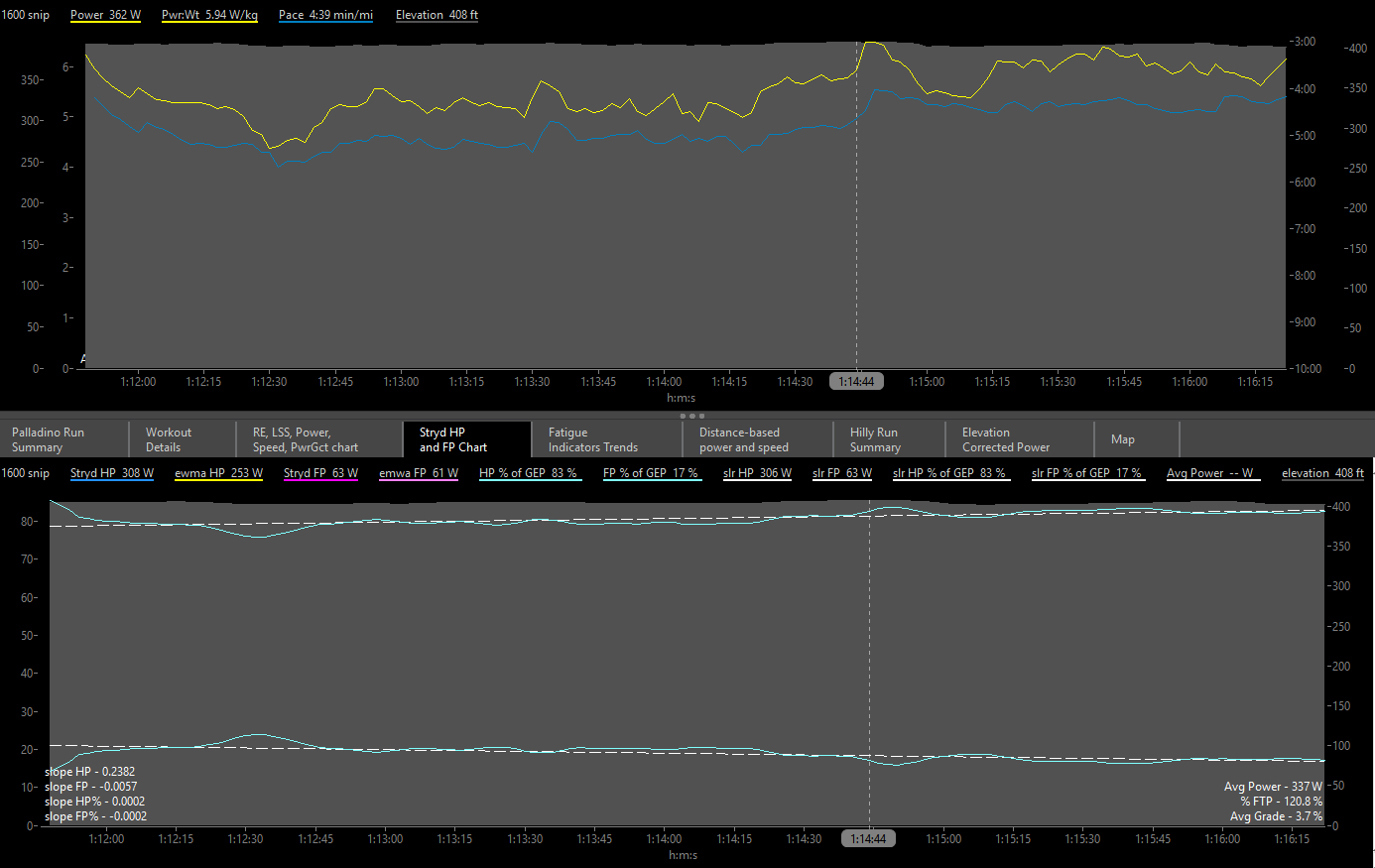 And a comparison of metrics from the same race:

In this race, as with most, to gain speed, the power expansion pathway involves a higher percentage of horizontal power.  This, in turn, is perhaps better understood by conceptualizing power in terms of vectors, as presented.  This is not to say that this is the only mechanism involved in speed expansion, but it is one that is commonly seen.

It also remains to be seen whether this relationship is trainable / actionable.  I suspect it is both.