Individual Climate Action and the Role of Divestment

Climate breakdown is an existential threat to society which has both individual and collective solutions. In this report, we consider how individuals in the West Midlands should respond to climate change, and how actions and lifestyles which create the conditions for overall change are particularly effective.

Is the West Midlands to blame for climate change?

If a crew are on a sinking boat, they will all get involved in bailing out the water. They all understand their predicament and will do everything it takes to survive. Similarly, climate breakdown affects every human being - in our interconnected world, we cannot pretend otherwise. The crisis demands that we act both individually and collectively.

The West Midlands has a unique role as the birthplace of the industrial revolution, the region that first started burning coal on a massive scale. Although it would be over a hundred years until scientists fully understood the greenhouse effect, the West Midlands has at least a symbolic responsibility to show leadership in bailing out the planet.

But equally, citizens of the West Midlands have their own role to play in ending the climate crisis. Bullring is one of the largest shopping centres in England, Primark Birmingham is the largest in the World, and the region produces an enormous 4 tonnes of emissions per person1, compared to Ethiopia which produces just 0.2 tonnes2.

So is action on climate change the responsibility of the individual or the government, or should it be up to business and finance, scientists or the UN? Clearly, all of these have their own role to play, and there are interesting dynamics between them, which we can see playing out in the media. When the -landmark 2018 IPCC report3 memorably set out a timeframe of 12 years to dramatically cut greenhouse emissions, many media outlets chose to focus on actions that individuals could take, like changing lightbulbs or eating less meat. This followed the dominant narrative about climate change over the last 25 years: that individual consumer choices had caused climate change; therefore consumers had to make sacrifices. This perfectly suited the fossil fuel industry with trillions of dollars of reserves of coal, oil and gas, the industry which had followed big tobacco’s lead and invested billions in spreading misinformation, employing ingenious PR firms that shaped the narrative to shift the blame for climate change onto individuals4. Notably, it was BP who invented the concept of the carbon footprint. By shifting the responsibility, the industry was able to continue exploiting it’s colossal reserves while investing only tokenistic sums in clean energy.5

And it is disingenuous for these fossil fuel company propaganda campaigns to shift blame to individuals, when so much of society’s emissions are out of the consumer’s control. An MIT study6 found that “a homeless person who ate in soup kitchens and slept in homeless shelters" in the U.S. will still indirectly emit some 8.5 tons of carbon dioxide each year. The limits of consumer choices have become apparent during the pandemic when global emissions only dropped by 4-7%7 despite all the world’s advanced economies being in lockdown for three months.

What can individuals do to fix climate change?

However, despite these caveats, it cannot be denied that individuals have to shoulder some of the blame and responsibility for climate change, especially the wealthiest individuals. The UN scientists have determined a “carbon budget” for the planet to keep below 1.5C, and a disproportionate portion of this budget is being used by a tiny number of individuals. This September, an Oxfam report8 found that the richest 1% of the world’s population are responsible for more than twice the carbon pollution than the poorest half of the world, 3.1 billion people. As the author of the report Tim Gore, said: “The over-consumption of a wealthy minority is fuelling the climate crisis yet it is poor communities and young people who are paying the price.” The world’s poorest and least resilient countries like Bangladesh, 30% flooded this year, and sinking islands like Tuvalu are today suffering the price of this over-consumption, and as the safe climate we grew up with deteriorates, no human being will be left unaffected. 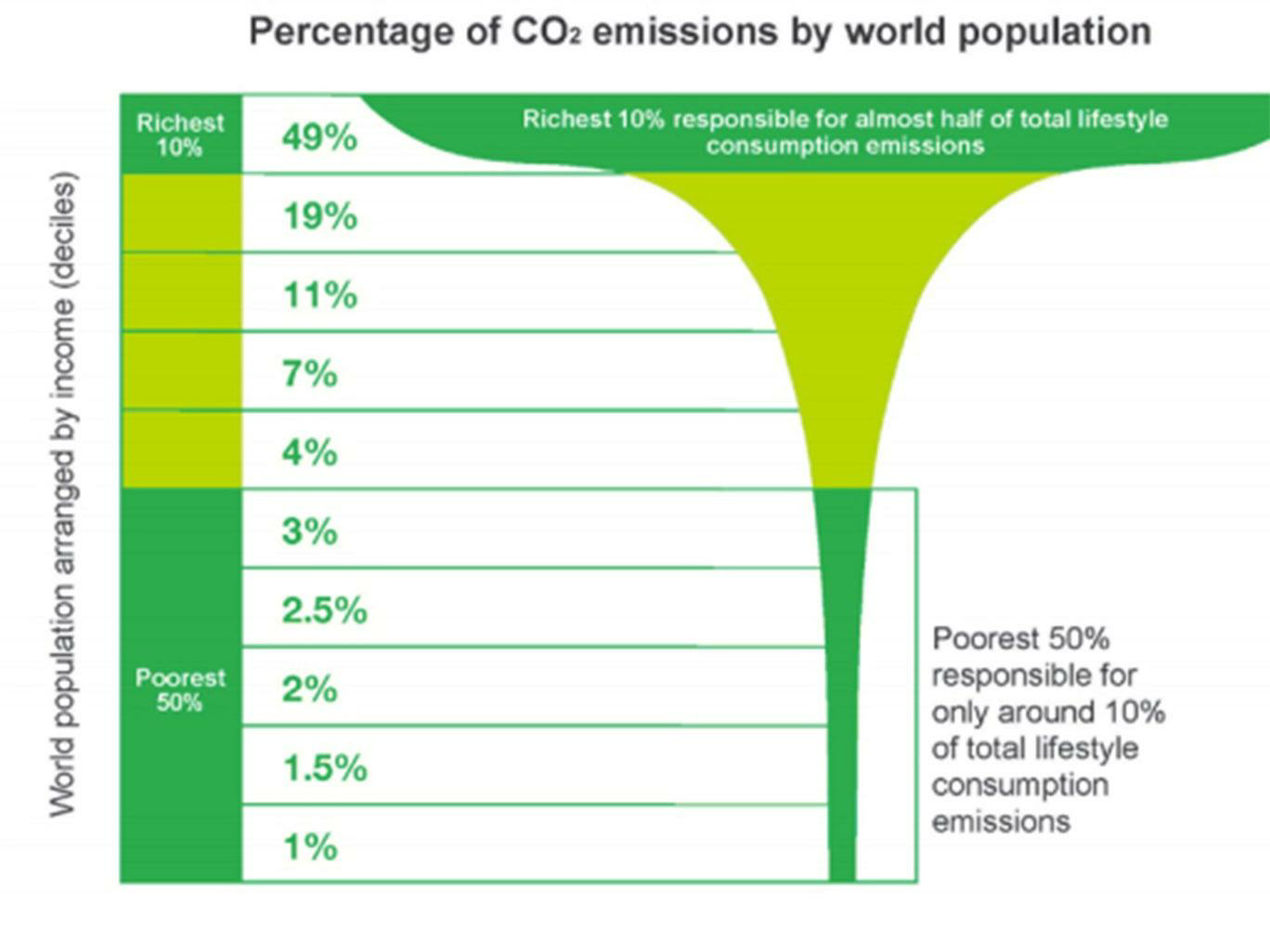 So what can individual citizens of the West Midlands do? This is a question tackled in Tim Berners-Lee’s excellent book, There Is No Planet B, A Handbook for the Make or Break Years. Much general advice about climate change in the media is focussed on living sustainably, and There Is No Planet B is full of practical ways for individuals to achieve this. But as Berners-Lee points out, there is a deeper question to answer:

“The global and systemic nature of our situation does have huge implications for the roles of individuals, organisations and even states. It is true that systemic adjustments can completely undo the direct benefits of many piecemeal actions. So, we need to see everything we do as part of a bigger game.

This means that the individual needs to think differently about their role. What we are looking for is systemic change. Each of us needs to ask the following question: How can I help to create the conditions under which the world that I want to see becomes possible?”

Berners-Lee concludes with seven points on this theme of individuals focusing on creating the conditions for change. Here are some highlights:

Can divestment enable individuals to make a difference?

Divest WMPF believes that the West Midlands Pension Fund offers a significant opportunity for individuals to create the conditions for change. As one of the largest pension funds in the UK, and one controlled by a local government authority responsible for the wellbeing of local citizens, the actions of the fund send out strong signals to the financial markets. And the actions of the councillors who oversee the fund send out signals to the people they represent about the direction of travel for local government. The fund has a choice between investing positively for the future, providing safe, clean and strong returns for members through green investments and investing in the local economy. Or in choosing to continue a losing financial and ethical battle investing in sinking companies like ExxonMobil (just knocked out of the Dow Jones) who defy the Paris Agreement, while covering themselves with the ethical façade of engagement, as if engaging with a company whose existence is threatened could ever yield results in time. The Church of England has just divested from ExxonMobil for continued failure to meet climate targets9, but, although the will to act positively is clearly already in evidence, it is not clear in our recent correspondence with WMPF whether the fund has set stringent enough climate targets for the companies it invests in.

By making sustainable lifestyle choices, consumers can communicate, through actions, about the world they want to see. And through their investments, individuals can have a significant impact on how capital is allocated. As markets change, this can also send signals to governments and help create the political conditions for change. But WMPF are not currently acting in the interests of individual, particularly younger, members who will retire into a world ravaged by climate destruction. So it is the responsibility of individual fund members to lobby their councillors to change the fund’s policies. Many have already done this. In 2017 Birmingham City Council listened to calls from locals and unanimously backed a motion for divestment. In 2019 Dudley council also responded to local pressure and passed a unanimous divestment motion. In 2020, 43 local people and fund members10 wrote to the Pensions Committee calling for divestment.

Every one of us has multiple roles in life, for example as a family member, a citizen, a consumer, a worker, or even as a councillor. In each of these roles we can use our voice and make choices that create the conditions for climate action. As citizens and fund members, an important action we can take is to call for our pension to be invested in a way that aligns with the world we want to live in. And we believe that councillors should consider both the financial and ethical health of these investments when approving the fund’s investment strategy. The fossil fuel industry is taking very little responsibility for the massive consequences of its historic and future actions, it is failing as an industry and is a bad investment. But beyond the financial health of the fund, councillors, in particular, have the power to safeguard the wellbeing of their citizens now and long into the future, taking responsibility and using their position of leadership to divest from the fossil fuel industry.

2.  List of countries by carbon dioxide emissions per capita https://en.wikipedia.org/wiki/List_of_countries_by_carbon_dioxide_emissions_per_capita

[2] List of countries by carbon dioxide emissions per capita https://en.wikipedia.org/wiki/List_of_countries_by_carbon_dioxide_emissions_per_capita