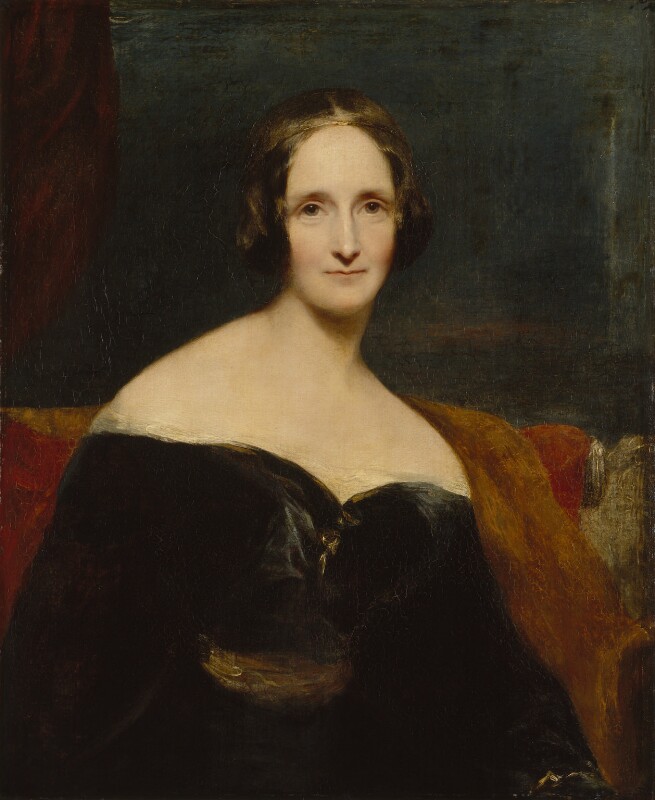 I thought Mary Shelley to be the only natural choice as my next author to be spotlighted after Mary Wollstonecraft, her mother. As we learned previously, Mary Shelley’s mother died three days after birthing her due to infection. Her mother’s death set in motion a chain reaction of events that would help to shape Mary fundamentally and set her on a course to live life much the same way her mother had. Mary would later give the world what would be an early example of the budding science fiction genre, Frankenstein.

William Godwin said when Mary was just fifteen years old that she was “singularly bold, somewhat imperious, and active of mind. Her desire of knowledge is great, and her perseverance in everything she undertakes almost invincible." Mary proved to be a happy child in her early years, but William felt as though he was doing a disservice to Mary and was unable to raise her the way he felt she deserved to be raised. He gave her an in-depth education, if not a bit informal for the time, and stressed that one’s own mind was the most powerful weapon one can wield. It is with that in mind that she set forth on her journey. William remarried in hopes of being able to give Mary the mother figure she so desperately needed. This ended up putting her in a Cinderella-type situation where her stepmother doted upon her own children and placed Mary on the proverbial back burner. Mary Jane Clairmont, William’s new wife, was known to be quick-tempered and quarrelsome. Though she was a refined lady with a formal education, neither of those attributes saved her from those around William detesting her.

It’s unknown why William sent his daughter Mary away to live with the radical Baxter family. It is, however, known that William did not raise her based on her own mother’s advice and standards, which were detailed in her book A Vindication of the Rights of Women. Because of this, it could be argued he had hoped Mary would come to be more radical in her politics and less of a philosopher. The radical movement of the 18th and 19th centuries was the precursor to social liberalism.

This would undoubtedly be the catalyst for her passionate love affair with Percy Shelley. Percy had been alienated from his affluent family for his radical beliefs and estranged from his wife, Harriet Westbrook. Percy rescued Mary’s father from financial ruin and relied on William’s Political Justice book heavily for what he had come to believe. Mary and Percy would secretly meet as hidden lovers at Mary Wollstonecraft’s grave. It was there they fell in love and professed to each other their ardent passion. William unbelievably did not favor Percy, which was a blow to Mary, as she believed him to be the embodiment of her mother and father’s beliefs. Upon William’s disapproval, Mary and Percy, along with her stepsister Claire Clairmont, decided to elope to France, leaving Percy’s pregnant wife behind.

Mary’s stepmother followed them as far as Calais, France, where the three of them talked her into leaving them be. As they traveled through France, Mary made note of the battle-ravaged country, saying, "The distress of the inhabitants, whose houses had been burned, their cattle killed and all their wealth destroyed, has given a sting to my detestation of war...". They made it as far as Lucerne, Switzerland before running out of money and having to turn back to return to England.

Their return to England was met with a cold reception. Mary’s own father wanted nothing to do with her, as she had found herself with child, unmarried, and labeled a pariah much like her mother had been. Mary wound up having to live destitutely, cope with Percy reveling in his wife’s birth to a son, and his constant outings with her stepsister, Claire. It is highly suspected that Shelley and Claire were lovers. This was compounded with the fact that due to the amount of debt they were in and the disownment of Mary, Percy and Mary had to move in with Claire. It was salt on the open gash.

It was their visit to Lord Byron that spurred Mary Shelley, who had been overseeing the editing and publishing of Percy’s works, to start writing the novel she would be most well-known for, Frankenstein. Lord Byron had decided to tell German ghost stories and then challenged them each to write a horror story. What came from this challenge was what she thought would be a short story, however, with the encouragement of Percy, she expanded it to a novel titled The Modern Prometheus, which was published in 1818, uncredited. The literary world assumed it had been a work of Percy’s, and it wouldn’t be known till the second edition publishing in 1821 that it was indeed Mary Shelley’s handcrafted story. Mary called this time in her life at Lord Byron’s her “stepping out of her childhood”.

Through a complex turn of events which saw her pregnant again, Claire pregnant with Lord Byron’s illegitimate child, the suicides of her half-sister Fanny Imlay and Percy’s wife Harriet, marriage to Percy, continued indebtedness, fearing the courts taking away their children, and persecution, Mary, Percy, and Claire left for Italy. The country had become a paradise due to political freedoms which they had not been afforded previously. Shelly again lost her second child with Percy, William Shelley, who passed due to suspected malaria, typhoid fever, or cholera. When you read Mary Shelley’s character William in Frankenstein, it seems oddly reminiscent of their son William. In the book, William is strangled by the creature. Just six months after William’s passing, Mary gave birth to Percy Florence Shelley, the only one of their children to survive into adulthood, eventually leading a long life and inheriting his father’s barony.

It was in Italy that Mary began writing her unfinished work based on her time in Rome, Valerius, the Reanimated Roman. Her son’s death sent her spiraling and consequently saw her pour her grief into a new work, The Fields of Fancy, which became Mathilda. The novella was a feminist look into the patriarchal society that plagued the world at the time.

The death of her husband saw Mary transition to someone who chose to live by the pen and for her son. Her precarious situation led to her transcribing Lord Byron’s poems, writing The Last Man, The Fortunes of Perkin Warbeck, Lodore, and Falkner while also contributing five pieces to Lives of the Most Eminent Literary and Scientific Men of Italy, Spain and Portugal.

Mary continued to choose to live by her mother’s feminist principles, helping women whom society deemed pariahs and had turned their back on, funding them and lifting them up. She would live the rest of her life wary and cautious of future love prospects, content with just living her life for Percy Florence. The end of her life saw her living with her son and his wife as she suffered from long bouts of illness which would give her horrible headaches and temporary paralysis. It is suspected due to her symptoms she suffered from a brain tumor and died at the age of fifty-three due to complications from it.

On the first anniversary of her death, Percy Florence decided to open Mary’s desk drawer where he found locks of hair from her deceased children, a notebook filled with writings between Percy and Mary, a copy of Percy’s poem Adonaïs. The poem was folded over, containing ashes from his father and his father’s suspected heart which Mary had kept with her for thirty years till she died.

Was it Percy Shelley’s Heart?

This sent me down a rabbit hole of sorts, where I started reading some horrific accounts from Lord Byron and others who were there to cremate Percy’s body.

After Percy’s boat overturned due to a storm, the bodies of him, Edward Williams, and a singular crewmate washed up on the shore days later. The only way to know this was Shelley’s body, as the parts of him not clothed were fleshless, was the clothes he wore and the book of Keats poetry in his breast pocket. As was law in Italy, one had to be buried immediately. Byron, Hunt, and Trelawny immediately buried Percy in the sand of the beach, using quicklime to help preserve the body. Arrangements were made to have Percy cremated and upon digging up his body to move it, Percy’s skull was split. They were able to carry him intact to the pyre, setting him ablaze with wine. Byron couldn’t handle the scene before him and left to go for a swim and Hunt left soon after, unable to bear it. Trelawny stayed to make sure the cremating was effective but struggled himself, as the split in Percy’s head caused an unsightly bubbling and popping of his brains. Trelawny held it together and watched on, noticing what seemed to be Percy’s heart charing but not burning. Trelawny burned his hand reaching into the fire to save Percy’s heart for Mary. There was an argument on who should truly hold Percy’s heart as many loved him. Hunt took the heart and preserved it in wine, deeming himself the only natural option to keep Percy’s heart. Lord Byron bristled at this and threatened to take his business elsewhere if Hunt did not give the heart to Mary. Facing financial ruin, Hunt agreed to give it to Mary, as she was the rightful owner of Percy’s heart.

Now, historians suspect that Percy’s heart very well could have been his liver, as the liver can withstand higher temperatures. With it being salt water-logged and being an already hard to burn organ, it would have been the more logical conclusion. Others argue that due to Percy having had tubercular infection earlier in life, Percy’s heart was mostly calcified thus saving it from being burned up. The debate lives on while Percy’s supposed heart was inevitably buried with his son, Percy Florence Shelley, in the family vault located at St. Peter’s Church, Bournemouth.