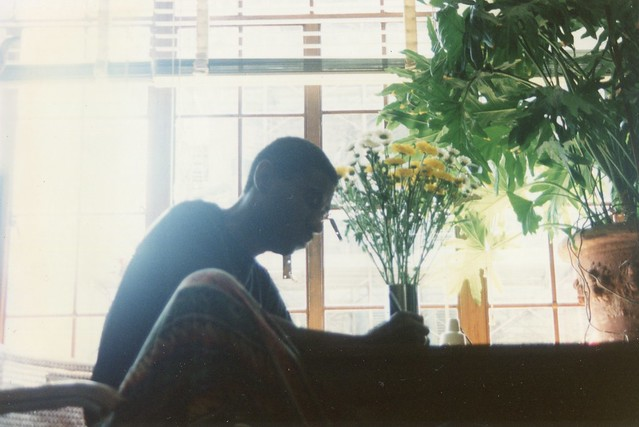 In December 1991, my partner, Richard surprised me with a Minolta camera as a Christmas gift.  Since then my photography has been about the documentation not only of my life but also of the times in which I have lived.   A sometime journal writer, at the time , while vacationing on Fire Island with Richard over Labor Day Weekend 1992, I decided to integrate my photography with my writings.

Writings, which by the way, were done by hand and/or typewriter.  Mostly by hand, first, and subsequently typed.  It would not be until 2000 that I'd get my first computer, a used IMAC from Richard after he'd purchased a new computer, that was not a MAC.  He found the MAC too complicated.

So, from 1992 to 2000 all of my projects were 'hard copy'.  Writings, most, which I still have stored in a box  that shed light on my personal history.  With the IMAC I was able to create several websites and/or blogs via AOL, Yahoo Geocities and MSN that featured my photography and writings.  When those companies deactivated their hosting capabilities, my archives were lost, in the process.  In 2004, I purchased a Dell and since then several HP computers.

In 2004 I signed onto Flickr and in 2007 onto Ipernity,  Both, have been excellent for my archiving.

With the exception of the first, which was Minolta, all my cameras since have been Canon.  Film from January 1992 until September 2005 and digital from September 2005 to present.

In  March 2008, the elvertbarnes.com website was launched for the purpose of archiving as much of my photography as possible, dating back to 1992 and to organize and maintain current projects as well.

Which, as of 31 March 2021, I will not be able to edit via the hosting site.  While the former archival site will remain online, effective 1 April 2021, updates to my photography will appear at elvertxbarnes.com.