Valley Forum: Timeshares by any other name 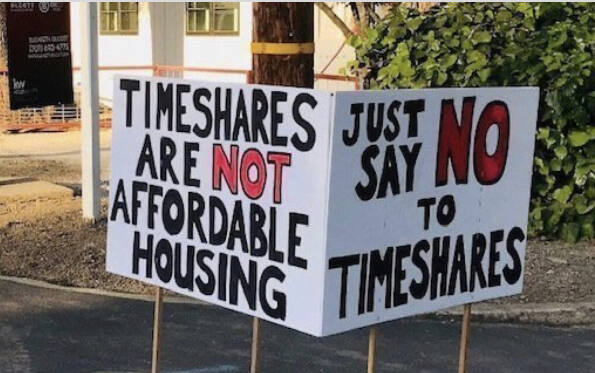 A neighbor across from a Pacaso house recently posted this double sign. (Michael Caldarola photo)

SPECIAL TO THE INDEX-TRIBUNE

Phil Nova’s convoluted and counterfactual arguments in his Valley Forum piece in support of Pacaso are utterly unconvincing (“Timeshares? It’s About Time,” June 25). But Nova does get one thing right: He calls Pacaso homes “timeshares.” After all, that’s what they are.

Nova tries to refute the claim that “opening up the Valley to timeshares will inflate housing prices and deprive middle-class residents of homes.” In fact, the proliferation of Pacaso homes will indeed inflate housing prices and will deprive middle-class residents of homes. Pacaso pays above market value for houses, thus fueling even greater price inflation. And once a house is a “Pacaso home” it will never again be available to a local family.

Pacaso’s business model seems to be a moving target. Just three months ago, CEO Austin Allison commented in a dot.LA article: “We’re planning to add a lot more markets... Twelve months from now, I expect that the majority of our homes will be within one to three hundred thousand per share.” But more recently Allison told the Wall Street Journal, “Luxury homes in luxury neighborhoods make terrific Pacasos.”

Nova claims that Pacaso buys “ultra-luxury homes – worth millions of dollars each.” But consider these examples in our own area:

• The Napa home that ignited the first protest was a 1950s flat-roofed starter home in a working-class neighborhood. It was purchased by a contractor for around $500,000, then flipped into a more posh vacation home.

• The Pacaso house on Old Winery Court in Sonoma was previously a rather ordinary 1970 ranch-style home, similar to the other homes on the street. It was rebuilt and enhanced to become a “trophy house,” later to be sold to Pacaso.

• In St. Helena, the company bought a modest three-bedroom house and morphed it into “The Jade.” Connie Wilson, who lives around the corner and whose grandfather built the house, said it was a shock to see Pacaso take ownership of the little home that, for decades, had housed the secretary at a local high school.

Nova asserts that “timeshares allow those who wouldn't otherwise be able to own a chance to start building wealth.” But how many can afford $600,000 (and expenses) for 44 vacation days a year? And – as far as building wealth – one must ask, “Will Pacaso ‘owners’ be able to sell their shares a few years from now?”

Will Parker of the Wall Street Journal has commented, “The timeshare model has historically been tough to make a financial success — for both operator and customer. The units can be notoriously difficult to sell, with buyers often dumping them for pennies on the dollar just to escape the annual fees. Timeshare values usually appreciate at a slower rate than fully owned homes, and Pacaso owners could suffer a similar fate.”

Finally, if someone you know thinks that Pacaso might be a good thing for neighborhoods, ask, “Would you like to have a Pacaso timeshare next door?”

Carl Sherrill lived in Sonoma in the early 1970s. Now a retired teacher, in 2016 he moved back to Old Winery Court, where he lives with his wife Nancy Gardner. He’s a member of STOP, Sonomans Together Opposing Pacaso. Read more at StopPacasoNow.com.