you should stop if pedestrians are present, and continue if clear.

1) They are more difficult to see than cars.

2) They give the rider little protection if there is an accident.

161. A safe driver frequently checks the rear-view and side mirrors.

162. Unless otherwise posted, the speed limit for passenger cars and pickup trucks is 55 MPH.

164. The speed limit inside a city is 35 MPH unless otherwise posted.

165. A car in motion tends to continue in the same direction.

166. Passing on the right is legal in both of these situations:

1) A four-lane highway with two lanes going in each direction. 2) On a two lane one-way street.

167. When backing your car, you should move very slowly.

169. If you come to an unmarked intersection where it is hard to see in all directions because of trees or buildings, you should stop at the intersection and move forward slowly.

170. The most frequent type of accident on interstate highways is rear-end collisions.

171. You are driving on an interstate highway when a breakdown forces you to the shoulder. You should raise the hood and tie a white handkerchief to the left door handle.

172. Studies have shown that under normal conditions the chance of a car being involved in an accident on an interstate highway is greater if the driver travels considerably below the posted speed limit.

173. A diamond shaped sign means slow down and drive with care.

174. You should use your low-beam lights at night in the city, in foggy or misty weather, or in a heavy snowstorm during the day.

175. Roads are especially slick just after it has begun to rain or shine.

176. When driving through heavy fog, you should slow down.

177. The best way to get good traction on hard packed snow is to put chains on your tires.

178. When starting your car and pulling away in snow, you should increase your speed slowly.

179. Overloading a car may result in damage to the car’s transmission and tires.

180. When hauling a heavy load, you should allow more distance for stopping.

181. If you flood your engine when trying to start your car, you should turn on the ignition and at the same time hold the gas pedal all the way down.

182. When changing a flat tire, you should block the wheels.

183. If you run off the side of the road onto the shoulder, you should take your foot off the gas pedal gradually.

184. To get out of a skid, you should turn the steering wheel in the direction the rear end of the car is skidding.

185. In North Carolina, license plate lights are required on all cars. 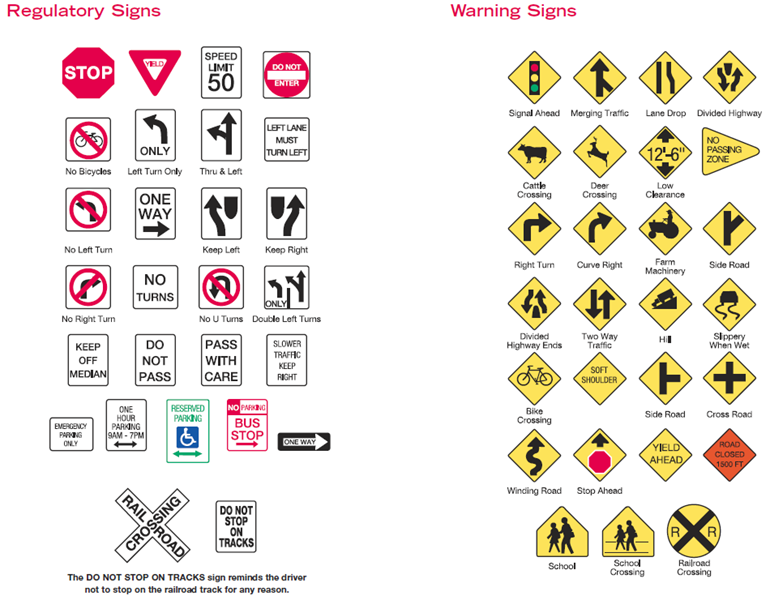 Rectangle-Regulatory (tells you what to do ex: Speed Limit)

Round or Circular or Crossbuck-Railroad Crossing