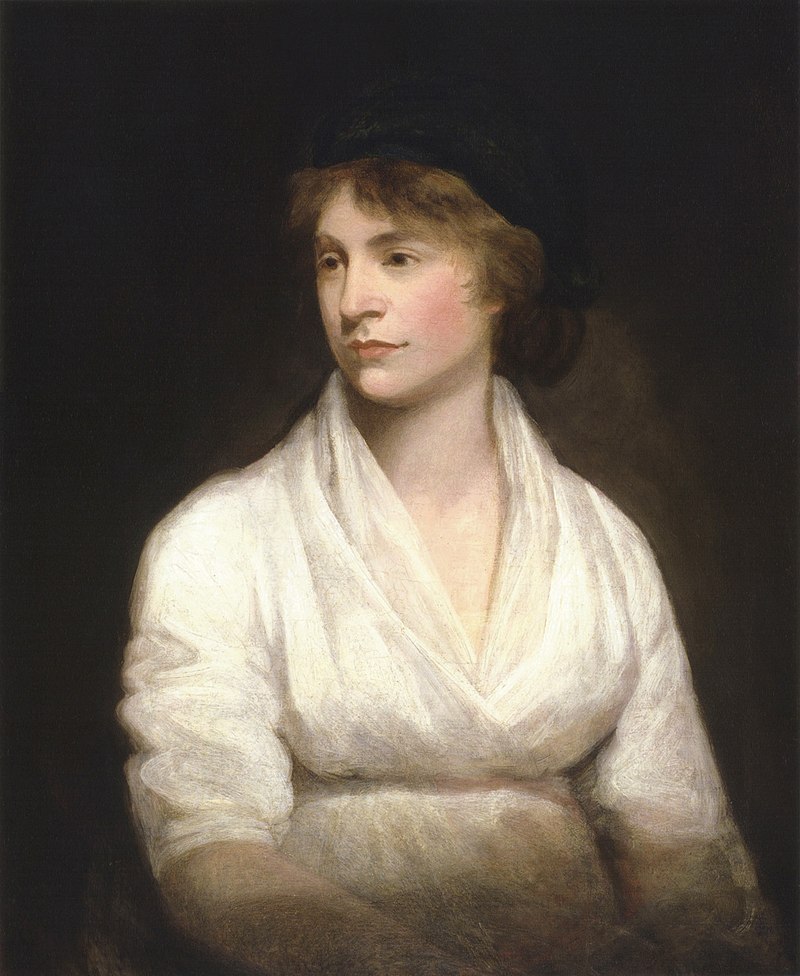 I will admit I had no notion of who Mary Wollstonecraft was when I first embarked on my research journey to spotlight her. Never once had I heard her name spoken in anything I read nor in circles of other writers and authors until a couple days ago, thanks to my dear friend Kimberly. As I read about Mary, I became enamored with her, and I was shocked to learn she was the mother of Mary Shelley, who’s well-known as the author of Frankenstein.

Mary Wollstonescraft’s influential life—her voice lending to the start of a feminist movement—is one I feel isn’t known as well as it should be. She was an intellectual who pushed back against the social norms of her time. Her refusal to fit into a predestined mold—which often dictated that a good and moral woman should save herself for her husband, be submissive to said husband, and boiled them down to being nothing but a womb in which to ensure the family line continued—set her up to be a pariah of her time.

She was a very strong and opinionated woman who spent a great deal of her life arguing against many of the male philosophers of the time and aligned herself with the radical beliefs of the likes of Thomas Paine. She argued that the French Revolution was a great feat but was adamantly against the Jacobin regime, which saw the arrest, suspected-treason-driven hangings, and starvation of many French citizens and continued to refuse equal rights to women. She argued that Marie Antoniette was a victim of the Monarchy, which has for hundreds of years treated women as mere birthing slaves. Due to the slavery of their womb and the required obedience to their husbands, it created a scenario where royal women had to use manipulative tactics to assert themselves beyond just being the bearers of life. Mary specifically spoke to Marie’s death and harnessed the blame on the matriarchal system that had held women as subhuman.

Some of her most famous works were in direct rebuttal of men printing out beliefs that promoted subservient behaviors. She actively fought back against these men by writing her own books to take down each claim point by point. Of course, it wasn’t known that these books were written by a woman, let alone Mary Wollstonecraft, until the second edition publishing of A Vindication of the Rights of Men.

Her first published book Thoughts on the Education of Daughters, which was a basic self-help book touching on etiquette, morality, and child-rearing, went further to deem it a mother’s responsibility to teach—among many other things—analytical thinking, self-discipline, and marketable skills in case they found themselves needing to support themselves. Mary drew upon her intellectual indebtedness to John Locke, though the prominence of religious faith and instinctive feeling sets her apart from him.

As a free spirit, she had several affairs, drawn to passionate men who set her heart ablaze. Mary had a child out of wedlock, Fanny, named after a dear friend and still, she fought against the conventional role of women. It isn’t known if she wanted to marry her lover, Gilbert Imlay, but he refused to be boxed in and pinned down. He left her and Fanny, as a result of feeling stifled. It was at this low point in Mary’s life that saw her attempt suicide twice, both times being unsuccessful due to Gilbert saving her the first time, as he stumbled across her body, and a stranger passing by the second.

Upon her return to literary life, she reconnected with several friends, one of which was William Godwin. Mary’s and William’s relationship when they first met was captious, as they rarely saw eye to eye on issues. It was upon reconnection that their relationship slowly grew into something much more. William saw Mary as the love of his life and was torn apart when she died giving birth to none other than Mary Shelley. Unfortunately, Mary Godwin ended up being a part of the rather large statistic of deaths due to sepsis caused by an infection in her uterus brought on by remnants of placenta left in her body.

William Godwin chose to honor his wife after her death by telling her incredibly controversial story in a way he viewed as loving, compassionate, and utterly sincere, which saw significant backlash from the literary community. William believed in his wife’s testament to feminist believes and thought the rest of the world needed to know that she lived her life on her own terms. It wasn’t until the feminist women’s rights movement of the 1960s and 1970s that Mary Wollstonecraft’s works and William Godwin’s portrayal of her life reemerged as an anthem.