In order to investigate iSchool MSIS candidates’ awareness of the UT Counseling and Mental Health Center we solicited voluntary participation in our study via survey made with Qualtrics Survey Tool that was circulated through the iSchool mailing list, ‘the-insider.’ Our 28 questions were intended to gauge student awareness and opinion of the Counseling and Mental Health Center. We were particularly interested in gauging student opinion on one of their more heavily advertised offerings, the ‘Thrive’ smartphone app.

A total of 33 individuals responded to our survey. This write-up is a summary of what we learned from analyzing the data from our survey results. 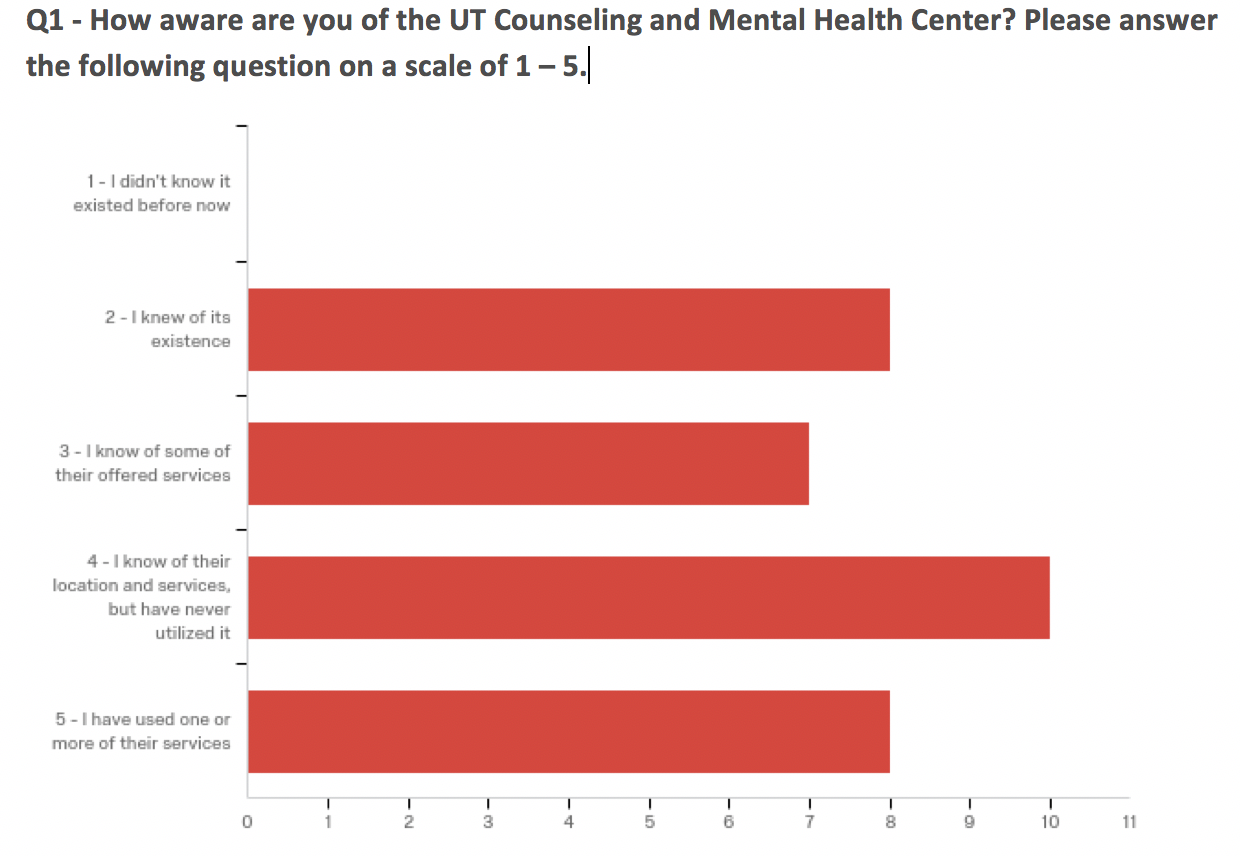 A core part of this research group’s survey was its intention to gauge the overall level of awareness that iSchool MSIS students had of the UT Counseling and Mental Health Center. We wanted to gauge the level of engagement (if any) that students had with the service. Our results pictured in figure 1 gave us adequate insight into this question. We discovered that 0 percent of respondents were unaware that the Center existed; 24 percent were aware that it existed; 21 percent were aware of some of the services offered; 30 percent knew where the center is and about the services it offers; and 24 percent of respondents had actually made use of one or more of the services.

That the majority of students were aware of the Center in some capacity implies that the Counseling and Mental Health Center has been successful in its effort to reach out to students at the iSchool. However, the fact remains that only 24 percent of respondents had ever taken advantage of the services offered. If one were to continue this research, it would be interesting to gauge exactly how and why students decide to use on-campus or off-campus resources.

Our survey did reveal, however, that there are some incongruous data present in our investigation. While 0 percent of respondents answered that they did not know the UT Counseling and Mental Health Center existed before taking this survey, 1 respondent claimed that they had not heard of the Center before when posed a yes or no question.

Another facet of this survey was its intention to gauge how students came to be aware of the UT Counseling and Mental Health Center. We posed an open-ended question: ‘How have you heard of the UT Counseling and Mental Health Center?’ When looking at the respondents’ answers, our research team was able to ascertain that all responses fell into five themes: personal research; word of mouth; flyers; presentations during orientations; and email. The table below shows the breakdown of the theme by prevalence in survey results.

The results of this survey demonstrate that the most common ways that students are becoming aware of the UT Counseling and Mental Health Center are via their own personal research or via presentations that take place during departmental or workplace orientations. The category of personal research represents students who have either completed coursework that resulted in their researching the Center, or who have looked up the Center for their own benefit as a result of need.

This research group also sought to poll student awareness of the 14 individual services offered by the UT Counseling and Mental Health Center. Students were asked, ‘Which, if any, of the UT Counseling and Mental Health Center Services were you aware of before taking this survey?’ Students selected all those that were applicable. Based on the survey results from our 33 respondents, all students were aware of at least one service offered by the center. Students had the greatest awareness of Short-Term Individual Counseling (29), Crisis Services (22), and Medication and Psychiatric Services (19). Students had the least awareness of Personal Exploration Groups (2), Skill-Building Groups (2), the Online Self-Evaluator (2), and the ‘Stress Recess’ webtool (3). The significant disparity between these results demonstrates that some services have been extremely well advertised whereas others are almost entirely unheard of.

While the above data helped us to gauge the overall awareness of iSchool students, the research team went on to ask if they would be interested in attending informational events hosted by the center. This was done to give us an idea of whether the level of student awareness was due to a lack of information or simply a lack of concern on the students part. Out of the 33 responses, 48.48 percent said that they would be interested in participating. That means that more than half of our student respondents would not want to attend. The research team did not ask why they would or would not attend the event, but a few conclusions have come to mind. One might be that students might not want to go back to the iSchool for information that could be available online nor would they want to travel to the main campus if the events were held there. A good follow-up question would be if they would be more inclined to attend if the center hosted events at the iSchool during prime hours. 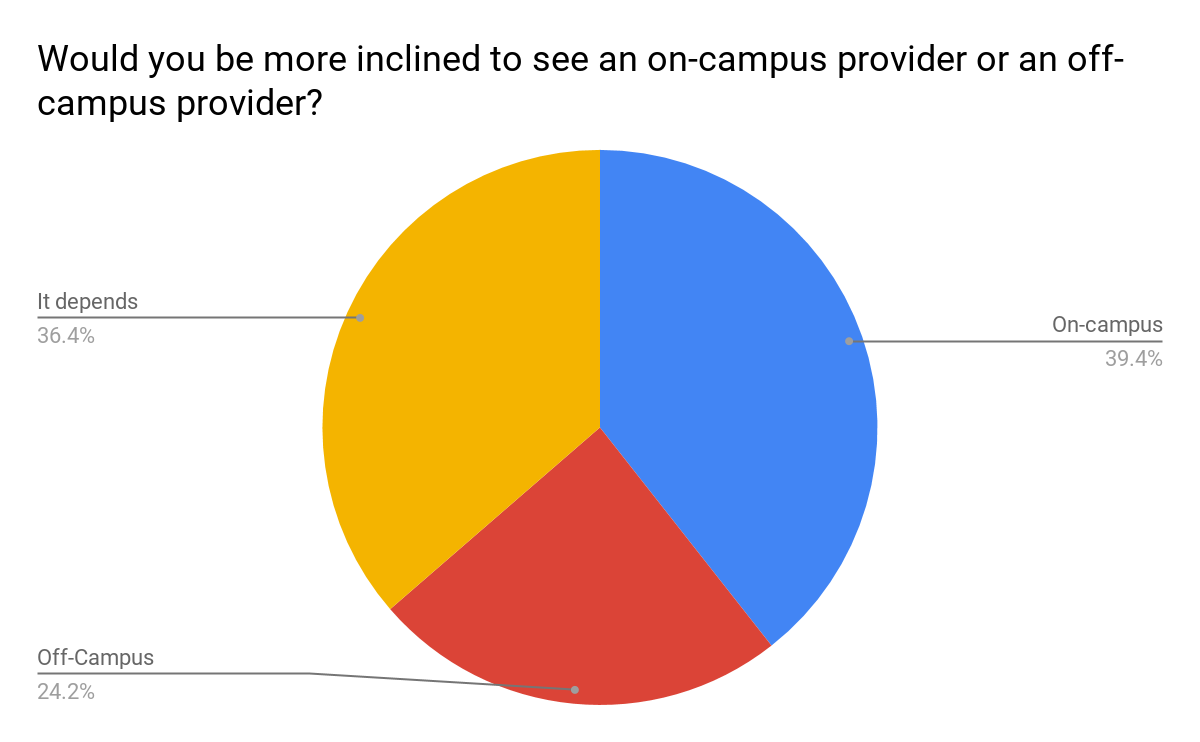 We then asked students to please explain under what circumstances would they use the services provided on-campus or use off-campus services. One answer that was repeated was the convenience of having the center close to campus and knowing the services were cheap with or without insurance. Students would not have to worry about the lack of insurance or distance causing them to avoid seeing a mental health professional. Other reasons included availability, LGBTQA+ friendliness, and emergencies.

In addition, the team also noted the reasons students might not be inclined to use the center and the commonality was that they were already seeing someone or that they were concerned with seeing someone on a long-term basis. This is something that doesn’t really seem fixable with students regularly joining and leaving the institution. However, another answer that popped up was laced with distrust, the student having had both good and bad experiences with counseling on campus in the past. This could be how UT improves in making student aware of the center: by promoting and discussing the safety of their Mental Health Center.

The research team then went on to ask participants whether their opinion on attending on-campus counseling had changed at all based on their new knowledge of group-counseling. The responses showed that about 84.62 percent of the participants hadn’t had a change of heart while only 2 participants responded with ‘Yes.’ To our team, this seems to show that, while iSchool students can change their minds upon becoming more aware of the services offered through UT’s Mental Health Center, there is still more that must be done if it is to become better utilized by students.

When asking iSchool students whether they thought their school was doing enough to make them aware of the mental health services UT has to offer, there was an even split between ‘Yes” and “No” with the answer ‘Somewhat’ being the predominant answer.

This could be in part due to a common answer that was given when asking said students to explain their reasoning to the above answer. While the students who have heard of UT’s Mental Health Center note that they heard their instructors mentions them when the first attend, others have gone on to note that they have heard next to nothing about the UT Counseling and Mental Health Center since then.

But then, UT has made an effort to better expose their students to the possibility of utilizing their mental health services. Within our survey, we asked our participants if they were familiar with the Thrive application which "'... is a free iPhone app designed to enhance UT Austin students' well-being and help better manage the ups and down of campus life.’” However, the app hardly seems to be fulfilling its role with 11 of our 33 respondents saying this survey was the first time they’d heard of it. Moreover, 16 of the respondents stated they had heard of it before but never used it. This left only 6 respondents to the questions involving app usage with only 2 having actually used the app habitually.

Beyond simply stating the numbers, the data from the follow-up question asking about user opinion on the usefulness of such an app, the results showed users felt a little unsure with 22 respondents selecting ‘Somewhat.’ When asked to explain the predominant insight was that, while some people might find help from a tool such as this, which is primarily known for housing short videos of real UT students sharing their own stories of struggle and triumph, they personally didn’t see how it could work as a substitute for actual counseling for them. To our research team, this seemed to indicate a lack of helpfulness as far as the actual app is concerned and not just a failure to promote the application.

Even with the iSchool being located a ways off campus, and thereby a ways from these mental health services, students seem to be, at least vaguely, aware of the tools UT has provided us to stay healthy. However, there is still more that could be done, although, perhaps not just “host information events” since only 16 of 33 respondents showed any interest. And, as much as our team and the respondents may wish it, the Thrive app simply doesn’t appear to be sufficient enough to either garner attention for the Mental Health Center or actually help students in place of the center. So, while UT, specifically the iSchool, appears to be taking steps to keep students aware of such tools, more could still be done to remind and encourage students to take advantages of such facilities so conveniently handy.