My most-used phrase of 2019 might have been “I hate art” (joking, usually). But that’s not true at all—I love art and believe in its ability to transform, build and heal communities. That said, this year did force me to seriously reconsider fine art’s purpose and role in the world.

I started the year as an editor for an alternative culture publication and am ending it as a gallery manager and full-time employee at an art magazine. This year has really led me to think hard about what I believe deserves a platform and resources (art as activism, art as everyday life, art as pop culture) as well as the art I wish we could stop talking about (can we please have a break from art for art’s sake?)

Which leads me to this: Self-publishing my annual year-ender list on Google Docs. Google Docs seems like the perfect venue for this new exploration of art sans-elitism: It’s democratic, informal, and intertwined with digital culture and contemporary modes of communication. With this list, the ~medium is the message~. The exhibitions I chose this year were democratic, approachable, current and, in my opinion, vital to our contemporary culture. We have to stan :) 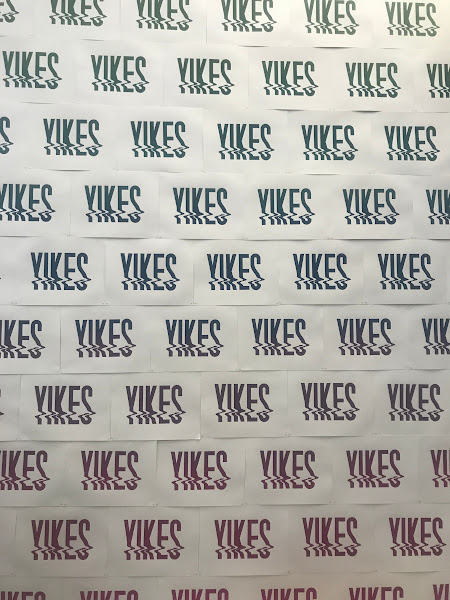 Word Art was a perfectly discordant combination of contemporary artworks made from, or about, text. The pieces in this exhibition reinforce the endless range of forms word art can take. Unforgettable was Tianna Rivera’s Yikes wall, which elevated a commonplace term in internet culture into a momentous work of art. Rivera not only acknowledged but celebrated selfie culture in her installation, encouraging visitors to take a photo in front of hundreds of stylized yikes-es. Elle DioGuardi’s Bridge Piece, a long mylar banner sporting “over and over,” transformed Spaceus’s back hallway into a forbidden yet alluring pathway, begging one to ask what’s at the end of “over and over,” if it ever does end? Spaceus never fails to produce comprehensive, current, interesting exhibitions of local artists, and Word Art was no exception. 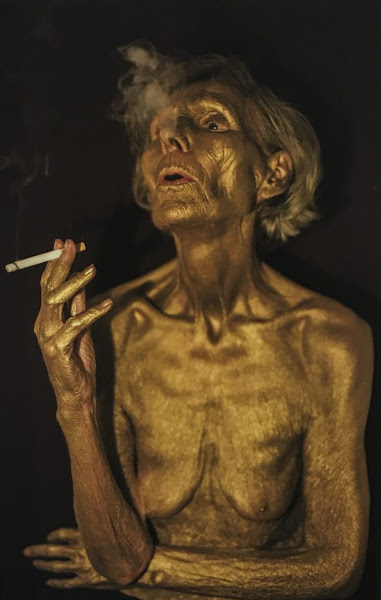 Photographing the Female was a beautiful, diverse portrait of all that “female” can mean to different individuals. A loaded word with a range of connotations, positive and negative, “female” has been historically used to empower some and exclude others by means of biological essentialism. This exhibition took into account the multiplicity of the word female, gracefully grappling with issues of queerness, aging, identity and representation as they relate to gender. Particularly resonant was Natasha Penaguiao’s Babuska 1, an image of an older woman’s gold-covered body whose wrinkling skin glows, highlighting the beauty and complexity of aging bodies. Paul Shiakallis’s series The Queens of Marok draws attention to a community of black female metalheads in Botswana, each posing with pride as they show off their leather-clad outfits. Photographing the Female was, to me, successful because it didn’t try to put a narrow, conclusive definition on “femaleness,” rather, it platformed a number of perspectives by women and femmes resisting constricting labels and stereotypes. 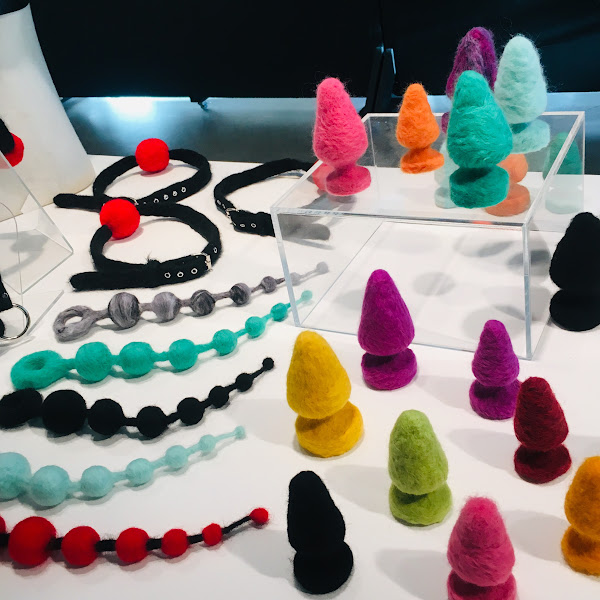 Too often, queer artists are squeezed into a box, expected to make art about marginalization or push clichés to the tune of “love is love.” PRIED, an atypical Pride month exhibition, rejected this loaded pretense. Skillfully crafted vases and jewelry made by queer artists were displayed alongside artisanal leather harnesses, truly expanding the idea of what queer art can look like. Boston artist Caleb Cole contributed his leather glove lipsticks, whose silky sculptural petals suggest feminine objects of desire—both cosmetic and bodily. Jamezie’s felted wool butt plugs and ball gags feel like a humorous, campy take on Meret Oppenheim’s teacup and saucer, similarly repulsing and inviting one to place the art in their mouth. Jamezie’s felted toys transform objects previously deemed deviant into something humorous and approachable.

Best of all? The art in PRIED was actually good. This wasn’t a tokenizing exhibit that included artists simply because they adhered to an inclusive theme, rather, each piece was aesthetically and emotionally alluring in its own rite. 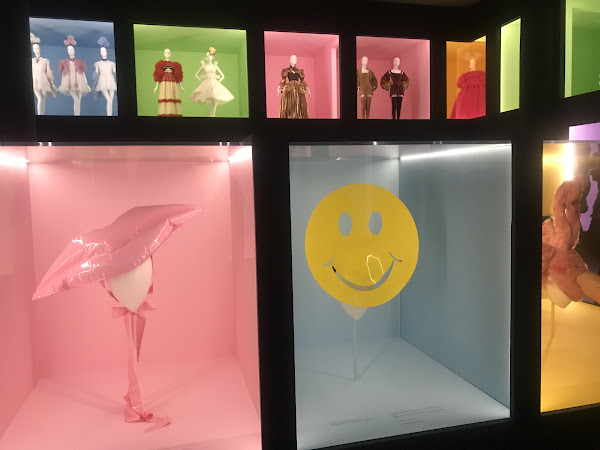 The Metropolitan Museum of Art

(One of) My hot take(s) of 2019: Camp: Notes on Fashion was good. Flawed, yes, but its achievements were as potent as its shortcomings. Camp: Notes on Fashion could have been a much more thorough and diverse portrait of camp than it was, and nonetheless, it was still better than so many other exhibitions in 2019. Here’s why:

1. The exhibition design was unparalleled. The show was framed around (debatably) seminal texts on camp sensibility, and the idea of text was carried through every single aesthetic decision: the sound of typing rang throughout the galleries; labels donned the classic typewriter font; and galleries were separated into parts of speech—camp (n.), camp (adj.), and camp (v.).

2. The range of objects, not just garments, on display exemplified the range of camp. The exhibition was widely criticized (fairly) for what it chose not to include, namely the contributions of queer people of color via drag and the ball scene. But the objects that it did include were fascinating in a different way, from a powdered wig to a blow-up emoji. It’s rare for an elite museum like the Met to expand their idea of what is considered art by including everyday objects alongside paintings and garments. I just wish they treated marginalized artists and art forms with the same inclusivity they granted to powdered wigs.

3. It got us all talking, for better or for worse. This was by no means wonderful or complete queer representation, but more than any other exhibition in 2019, Camp prompted conversations about queerness in popular media. Overall, I’m glad the Met at least tried, and I think the next major museum to do a show so closely intertwined with queerness will be more successful following in Camp’s wake. 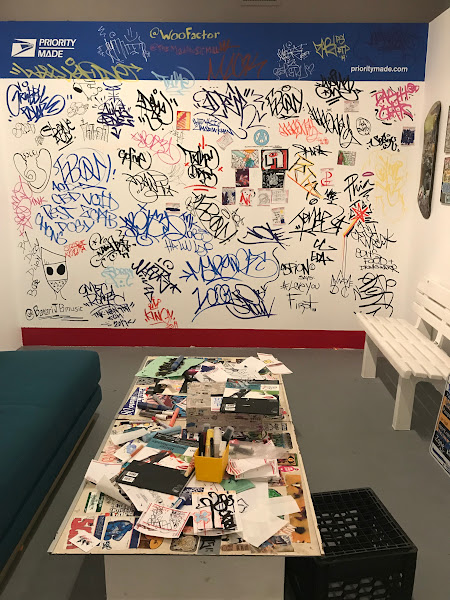 Left: Gallery view of Priority Made

Full disclaimer: I now manage Dorchester Art Project, and at the time of this show, I was on the gallery’s volunteer committee. Is it unethical to write about a gallery you’re so obviously in love with? Maybe. But guess what? Priority Made was that good, so I’m writin’ about it anyways!

Priority Made was a group exhibition featuring hundreds of Label 228 Postal Stickers, aka, the Priority Mail Label. Sometimes gallery shows about street art lack life, lack context. They take the most beautiful thing about street art—accessibility—and bring it inside a whitewashed room only available to audiences comfortable in that sort of space. Instead of sacrificing something full of heritage and tradition into a purely aesthetic object d’art, Priority Made celebrated the availability of the post office labels and carefully considered access throughout the exhibition. One of the galleries was even transformed into a sticker-making station, with labels and art supplies everywhere for people to create their own work of art with. Priority Made embraced all of the best parts of street art: variety, expression, community, and most importantly—accessible materials. 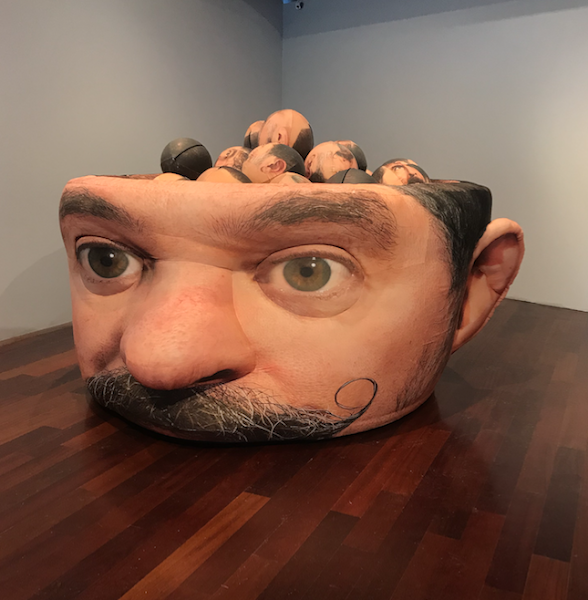 Urgent Blowout is a provocative investigation of the ego in contemporary culture. Inflated reproductions of the artist’s head are produced in excess and commoditized (each of the emoting heads can be purchased for $500). Warmouth is no Kardashian—his image is not blurred to perfection like Kim’s, rather, blemishes and hairs are captured in high-def—yet his works evoke the very principles that define reality TV and social media. He performs exaggerated displays of emotion (the faces range from Skeptic to Supergrump) and presents them en masse; we are privy to these heightened expressions, yet when viewed together, they do not create a complete portrait of the artist. We see the man’s image, yet we do not know anything about him.

Warmouth’s examinations of self-image don’t come off contrarian or better-than-thou (Most popular discourse about the ego and social media begs an eye roll and an “Okay Boomer”). Instead, his larger-than-life installations feel playful and comical. Warmouth tackles complicated topics with levity, inviting engagement rather than alienation or shame. 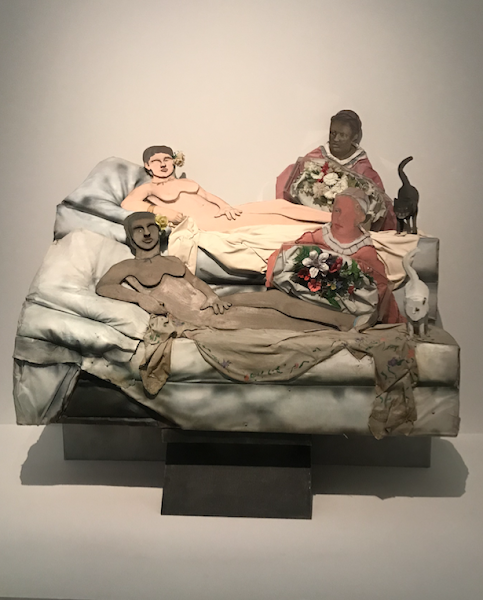 4. Black Models: From Géricault to Matisse

Keeping this one short because you can find reviews of this exhibition in Top 10 lists by critics all around the world right now.

In short, I think it’s great to see museums self-reflectively pointing out lack and absence in their own collections. Black Models poked holes in the complex history of an iconic artwork that draws thousands to the Musée d’Orsay every year: Manet’s Olympia. The show wasn’t necessarily enjoyable and it certainly was not aesthetically beautiful at all, rather, it prompted necessary conversations about race, power and representation in art, politics, literature and more. Black Models was hard-hitting and disturbing, which is exactly what the French museum needed in 2019. 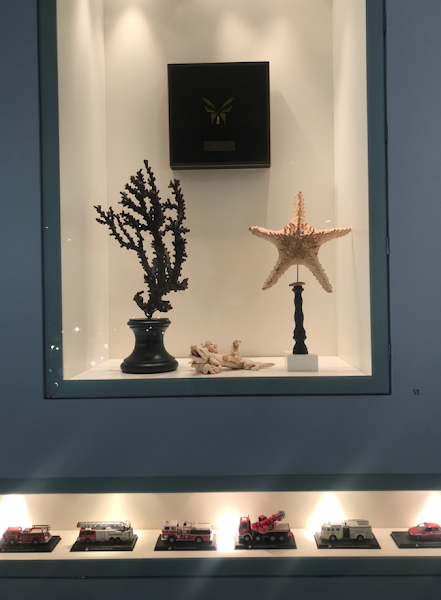 Based on a traditional cabinet of curiosities, which has its origins in Germany, this exhibition brings together historic and contemporary examples of culture to paint a nuanced picture of what it means to be human. Like a typical curio cabinet, Wunderkammer includes natural specimens, anatomical models, scientifica and fine jewels. But unlike norm, Wunderkammer features iconic cultural ephemera and contemporary beacons of pop culture: a Dolly Parton pinball machine, toy trucks, an intricate oil painting of a ham sandwich and a funhouse mirror.

It’s like this exhibition was born straight out of my curatorial dreams. In my opinion, the best exhibitions have potent sociological implications but might not include art at all. I love exhibitions of stuff, objects, things without virtuosity. Of Dolly Parton! If there’s one thing I hope comes out of 2020, it’s more art institutions pivoting their focus towards everyday objects which have stronger implications than a painting ever could. 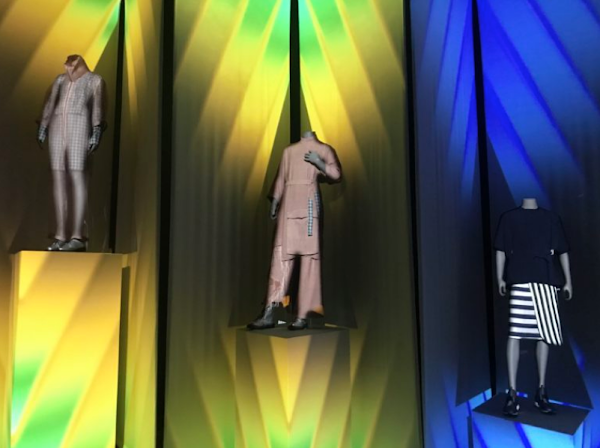 I’ll keep this one brief because I already wrote an extensive review of Gender Bending Fashion back in April. The MFA blew it out of the water with this show. The museum received pushback about their lack of queer, trans and nonbinary staff contributing to Gender Bending exhibition planning, and they responded with concerted efforts to include LGBTQ+ Bostonians in many elements of the exhibition. This was true in some of the artworks—including a queer portrait series by Ally Schmaling—as well as the organizations, designers and musicians featured at the MFA’s late night programming on March 15. In retrospect, this exhibition really played a pivotal role in the way the MFA approaches its exhibitions. MFA staff have alluded to an upcoming community advisory program (to be unveiled in 2020, I believe), which invites a board of individuals with academic expertise and lived experience to weigh in on exhibitions pertaining to their communities. Gender Bending Fashion was an undeniable success, one that proved that fair, well-researched, thorough representation can be achieved when museums call in the right people. 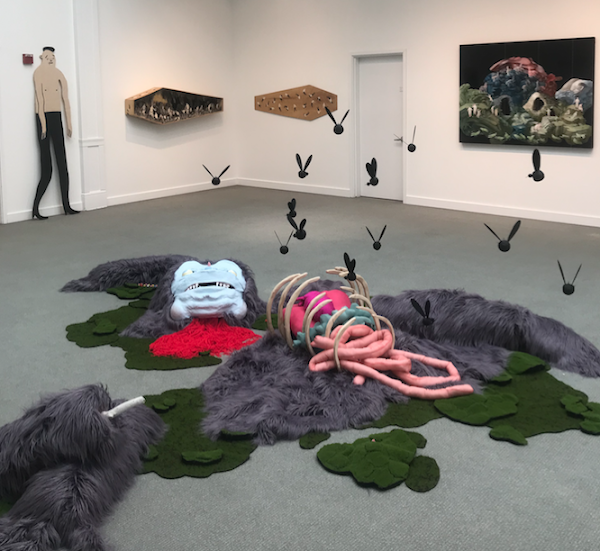 Love Superior, A Death Supreme had the strongest, clearest vision of any exhibition I encountered this year. Love Superior, A Death Supreme  was a collaborative project by sisters Nicole and Caitlin Duennebier, who both contributed their own work to the show and even created several new pieces together. Nicole is a figurative painter who creates opulent still life paintings with repulsive subject matter: fungi, rotting fruit, flora and fauna that feel both inviting and threatening, as if the nature could consume you whole in the blink of an eye. Caitlin’s work is more comical, more jovial in spirit and style, oftentimes depicting bendy figures painted with just one wash of color and restrained markmarking.

This playful grotesqueness carries through each piece: a series of paper mache masks somehow both uncanny and adorable; a stuffed-animal-and-shag-rug monster decomposing into cartoonish intestines and fuzzy blood on the gallery floor; and wooden coffins with pop-up scenes of the underworld.

The Google Doc format lends well to collaboration and real-time chatting—Below, I want to create a space where anyone can write about their top exhibitions of 2019. Leave a comment about your own favorite exhibition below!! I want to know what you liked and why you liked it.