All social events are currently cancelled

All events are at the OBC Clubhouse unless otherwise stated

The Bacon Butty morning is a good opportunity for us to get together and to get up-to-date with what’s been happening over the winter.  It took us a little while to get the club house to wake up after its winters rest but we managed to get everything working and provide butties to 53 members. 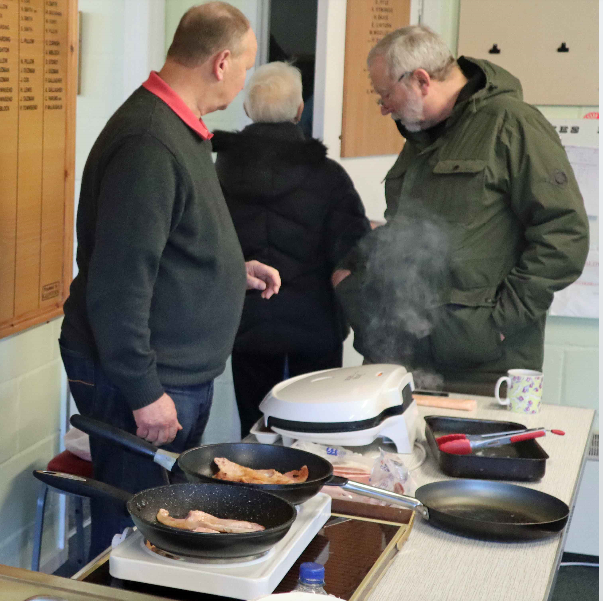 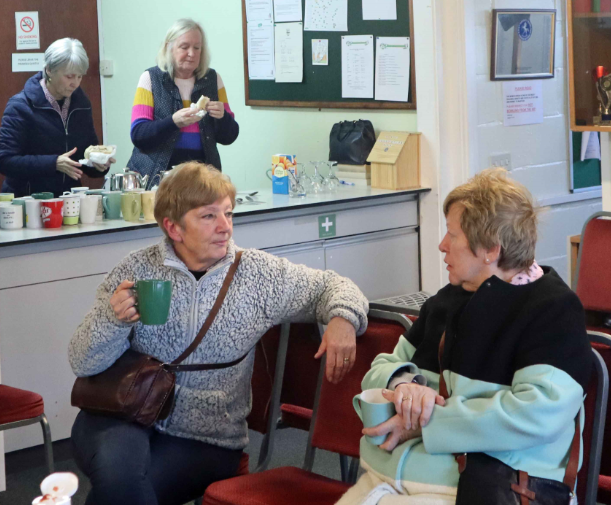 This year we had our usual entertainer Andrew singing songs and Christmas carols and our usual host telling jokes and having fun.   The club house was suitably decorated and there were our usual super raffle prizes and a surprise spot prize.  As you can see from the pictures below we all had a good time. 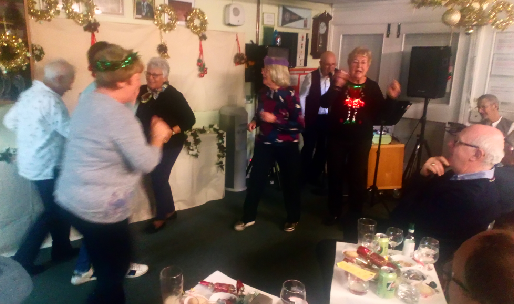 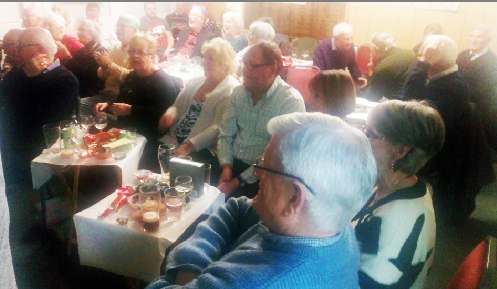 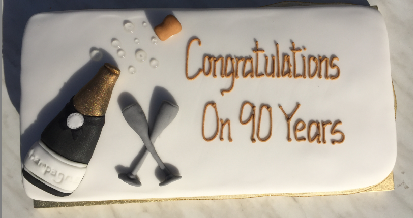 Our Celebration Day on Saturday 14th September, was a good day !   Our club was founded in 1929 and we therefore celebrated 90 years as a bowls club !  The weather was wonderful and everything went very well.

Once again we had an enjoyable evening singing along to a selection of popular songs and carols lead by our guest singer Andrew.

The evening’s entertainment was enhanced by a performance of “The star of the County Down” sung by Noel.

Thanks to Peter Townsend for donating the star raffle prize of a voucher to be spent in his excellent butchers shop and a special thanks to the resident comic & master of ceremonies Dennis, and to Barbara, Terry and Kay for organising the evening. 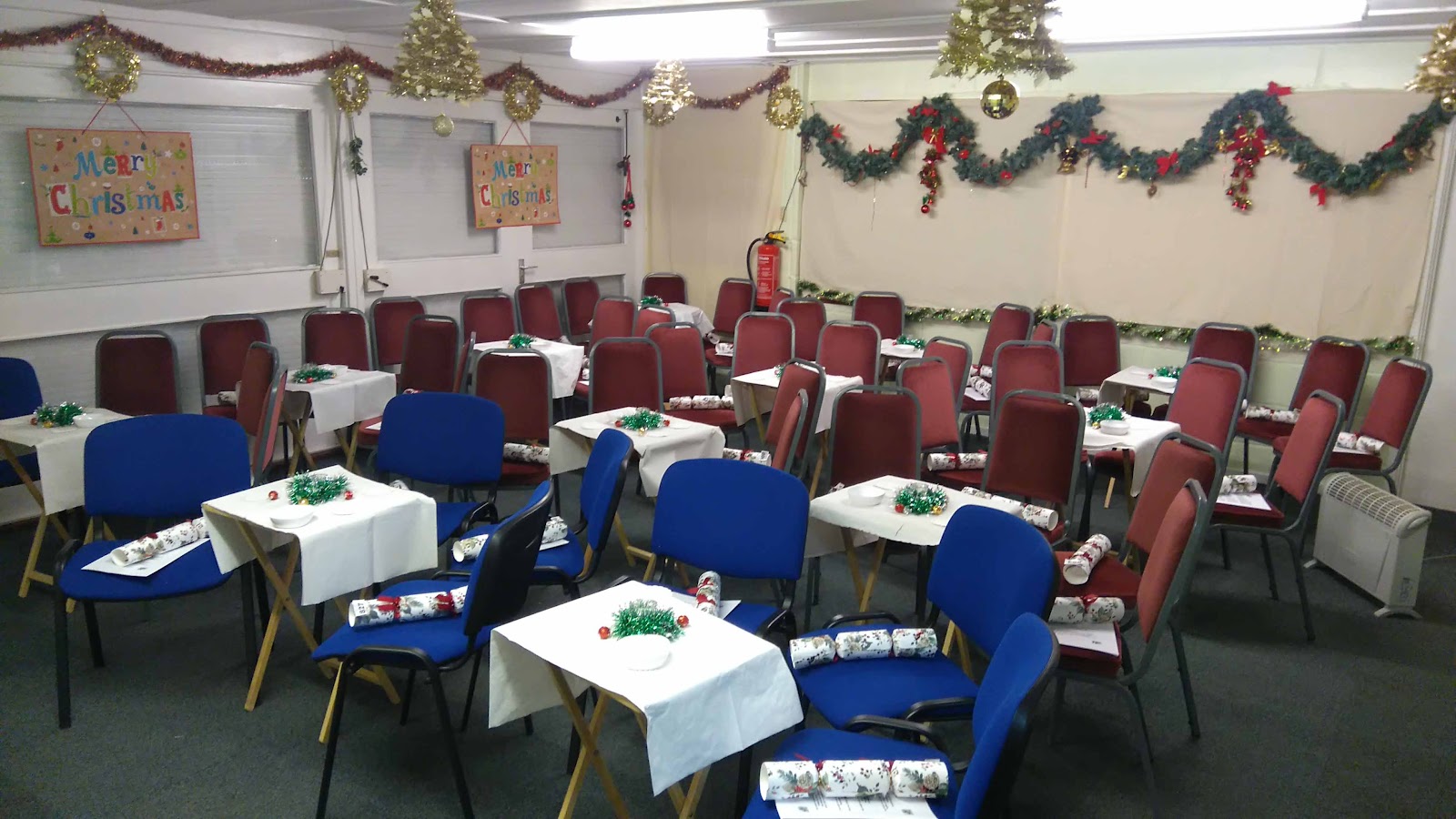 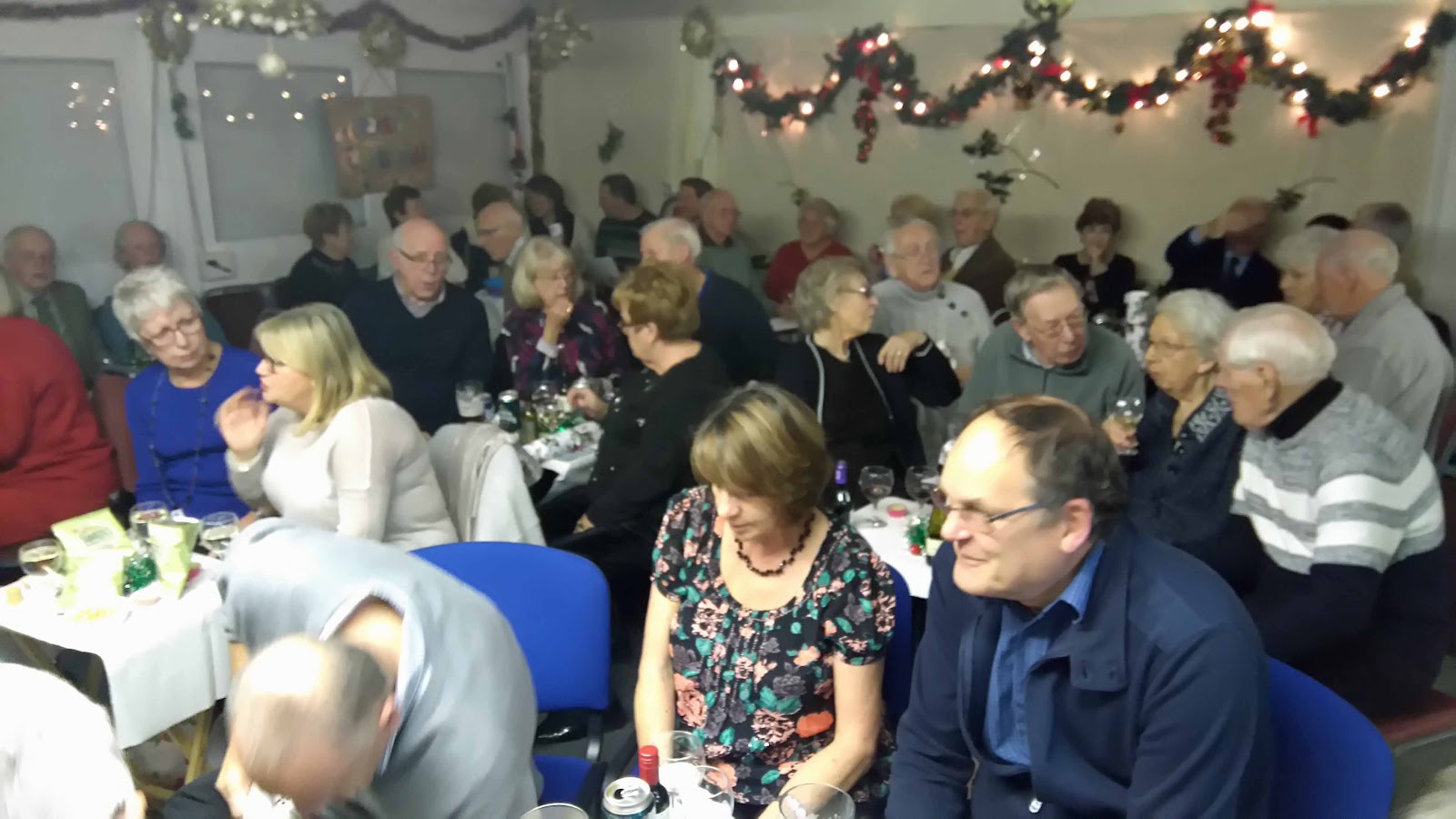 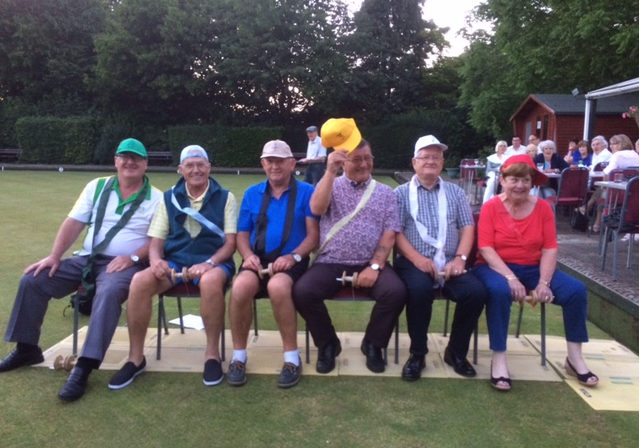 These are the pictures of our club house for the cabaret evening on Saturday 24th September.  Some people said that the club house looked like a French restaurant as they walked in saying "ALLO ALLO" !

Everyone enjoyed the singer and Dennis tells me that the comedian was excellent, 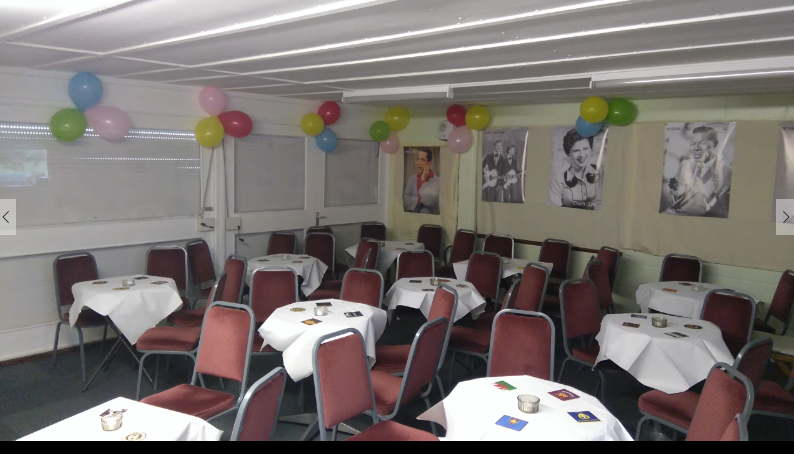 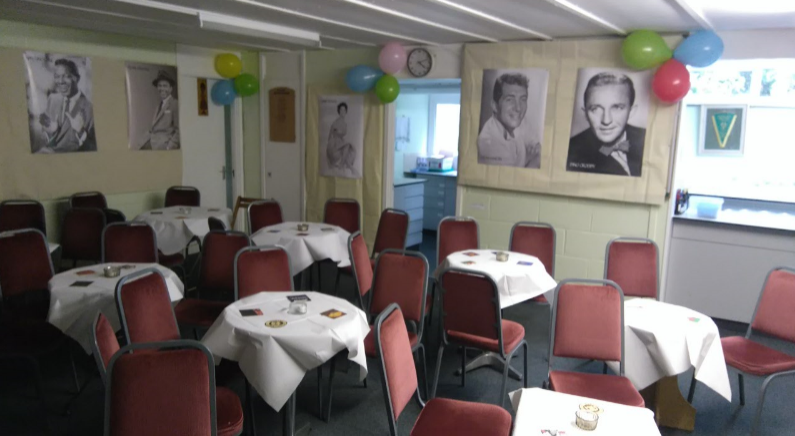 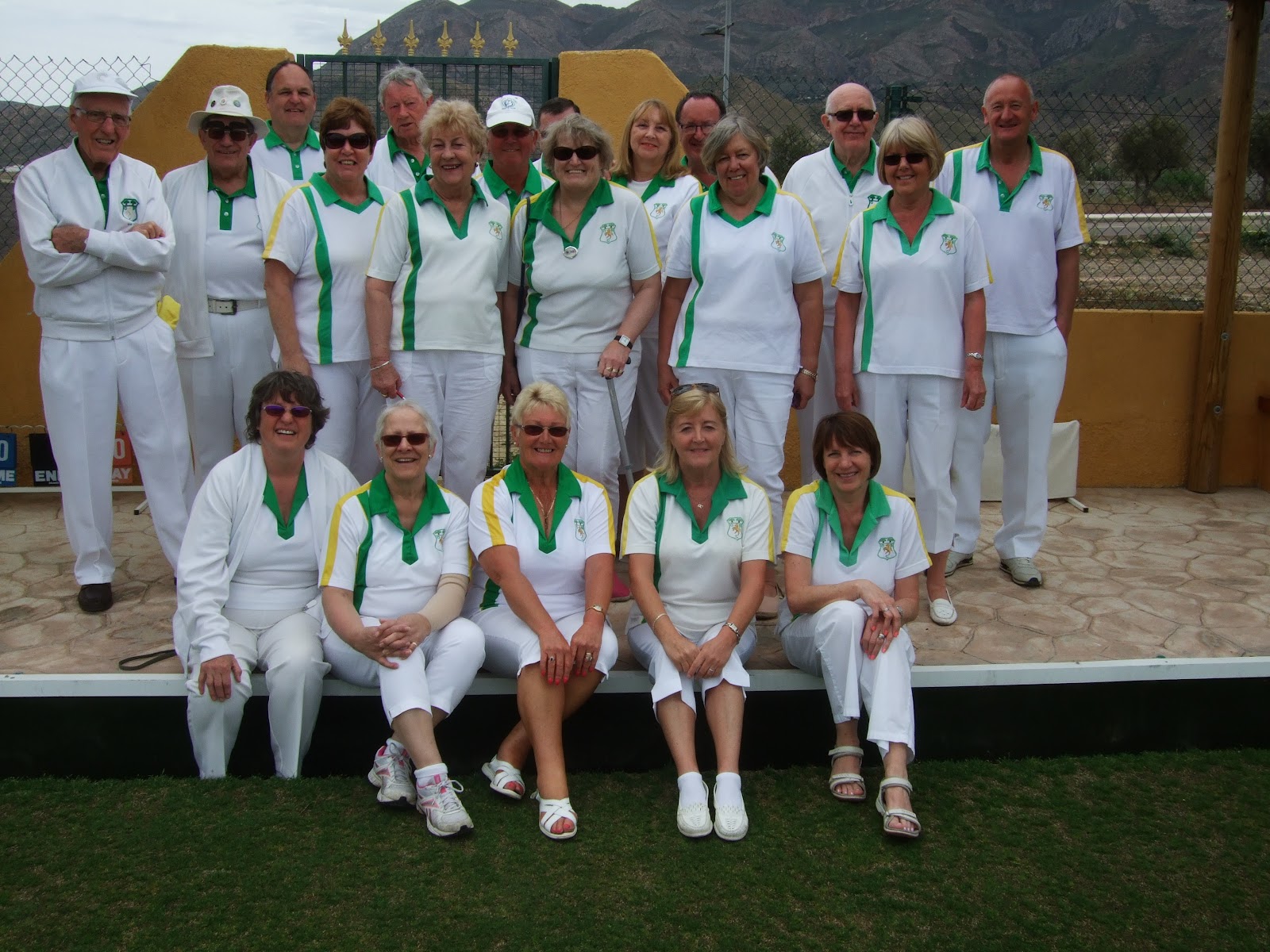 The tour group of 23 people convened at the now traditional ludicrously early starting time. Last year it was the early hours of the morning; this year, the middle of the night !  With joint favourites for last arrivals being Val /Alan and Yvonne / John,  local bookmakers made a tidy profit as with both these pairs amongst the early birds, it was left to Sue and Jill to bring up the rear mumbling about a tardy taxi driver.

The travel arrangements all went smoothly although with the departure gate being just about as far away from the South terminal as possible, there was more than the usual amount of puffing and panting in the queue for boarding. Happy Memories of last years half empty Monarch Airbus soon faded as we squeezed into Easy Jet’s modified Spitfire but we arrived in Almeria on time and after an hour on the coach were at the hotel by mid morning. All the rooms were ready for occupation which was an added bonus for the weary and the rooms were spacious and overlooking either the sea or the hotel gardens / pools. A nice touch by the hotel was to put our oldest tourists( Fred and Ron ) in adjoining rooms and to make it easier for them  to remember, with room numbers correlating to their respective ages (Fred in 111 and Ron in 113).

The first game on the following day got off to a somewhat inauspicious start with the coach driver missing the turning and dropping us off on the hard shoulder. With a somewhat lukewarm welcome followed by a thrashing in an untypical mini hurricane, that game is best glossed over . In fact all of them are probably best glossed over because although both welcomes and performances improved as the week progressed, there was, with a couple of exceptions, in coaches parlance, room for improvement. Two of the exceptions were Peter and Sheila who won best male and female player respectively for the week. 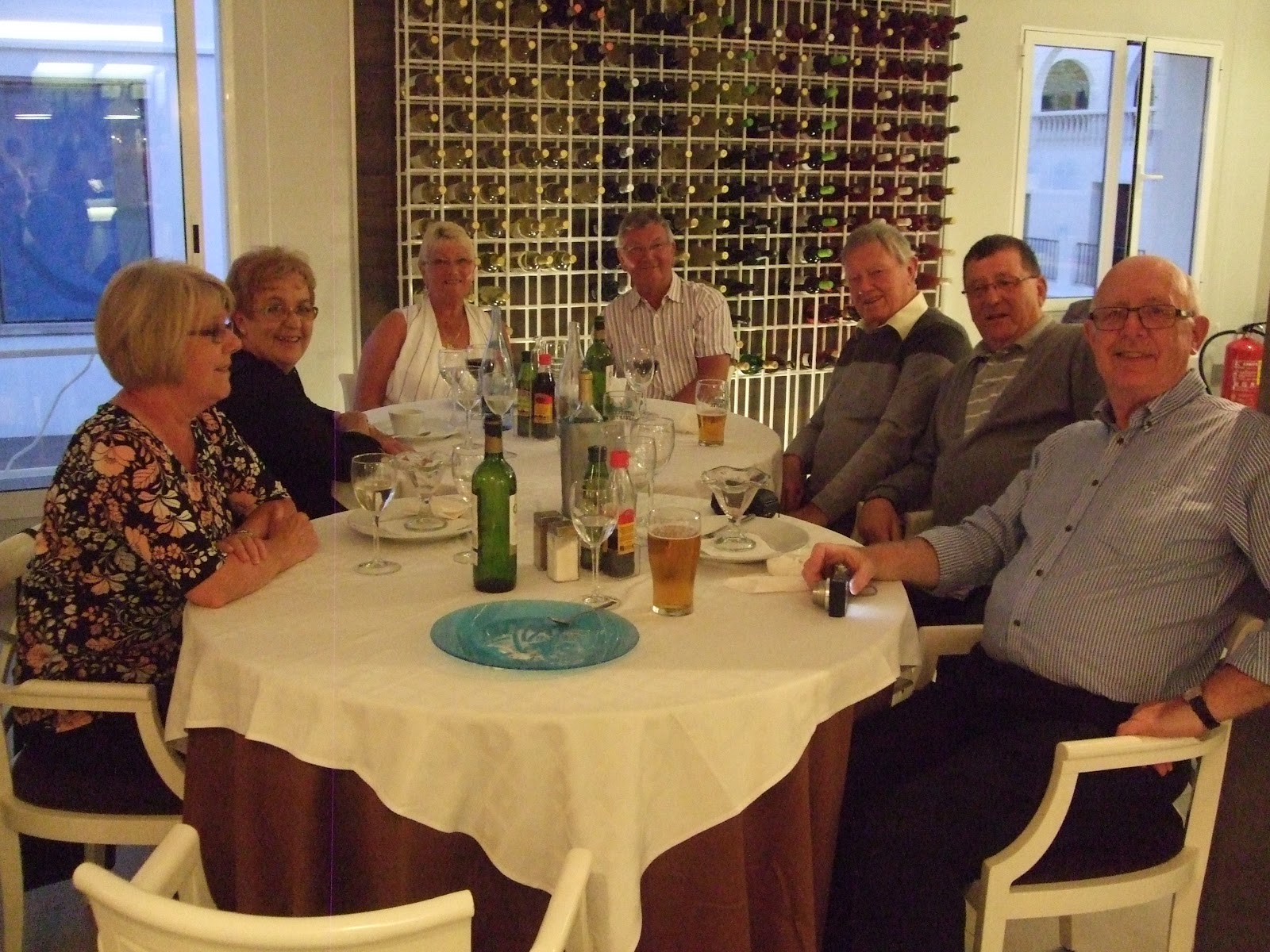 There were two free days with the option of one excursion and the majority vote was to attend a nearby Olive Oil factory and Vineyard/   Bodega. Not much to report from the Olive Oil factory other than it is healthier to eat your bread dipped in oil rather than spread with jam. There was certainly no sign of Popeye or indeed any of the extra virgins that the men had been expecting to see. At the bodega , we were met by Juan, the owner who had recently finished runner – up in the all Spain, Sacha DIstel look alike competition. This was all too much for Sue who spent the rest of the day jostling to the front at every opportunity to get a better view. Unfortunately for her the very front row was occupied by the men getting a better view of Louisa, our tour guide / translator for the day.

Although the hotel accommodation was fine, there wasn't much in the way of entertainment so as with last year year,  mammoth games of chase the ace filled the time after the evening meal. The hotel food was plentiful but somewhat variable in quality so on the recommendation of Tony, the group ate in a excellent local restaurant on the Saturday evening which was very well received.

There were few complaints from the whole week although Phil complained that nobody swam in the hotel pool at the same time as him (he promised to bring some trunks next year). In addition Tony complained that apart from Carol, his long suffering wife , nobody sat near him at meal times ; he promised to see a digestion specialist on his return.

Thanks are due, as always to Mo for co- ordinating the trip and to Steve, our Bowls Abroad representative for making all the local arrangements. As previously thanks are due to the whole group for their camaraderie throughout the week.

2015 was the 50th anniversary of the Club’s move to its current site on the edge of Goddington Park.  We marked the occasion with a Hog Roast, provided by member Pete Townsend, and a ‘golden’ drive - and the sun shone on us! 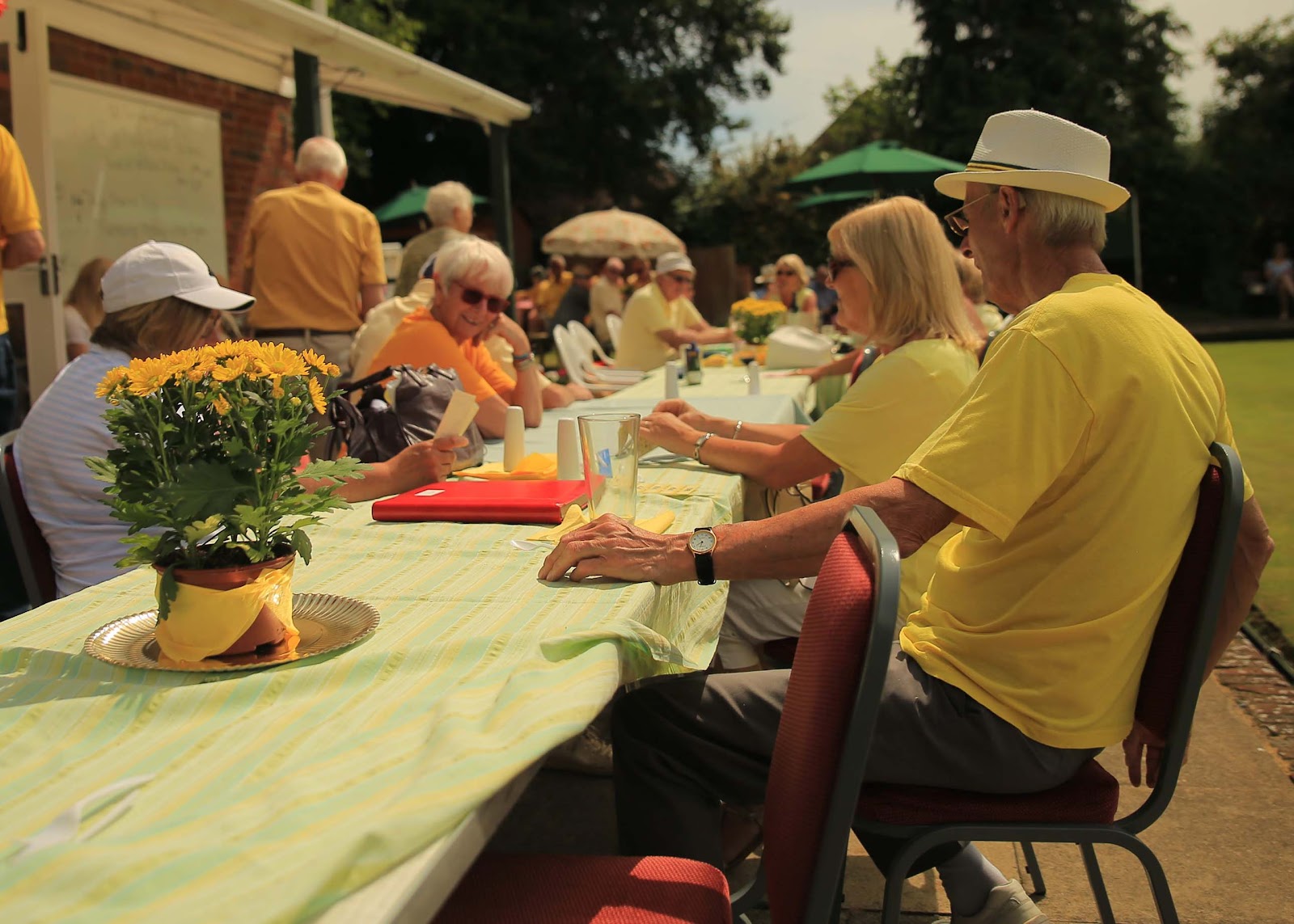 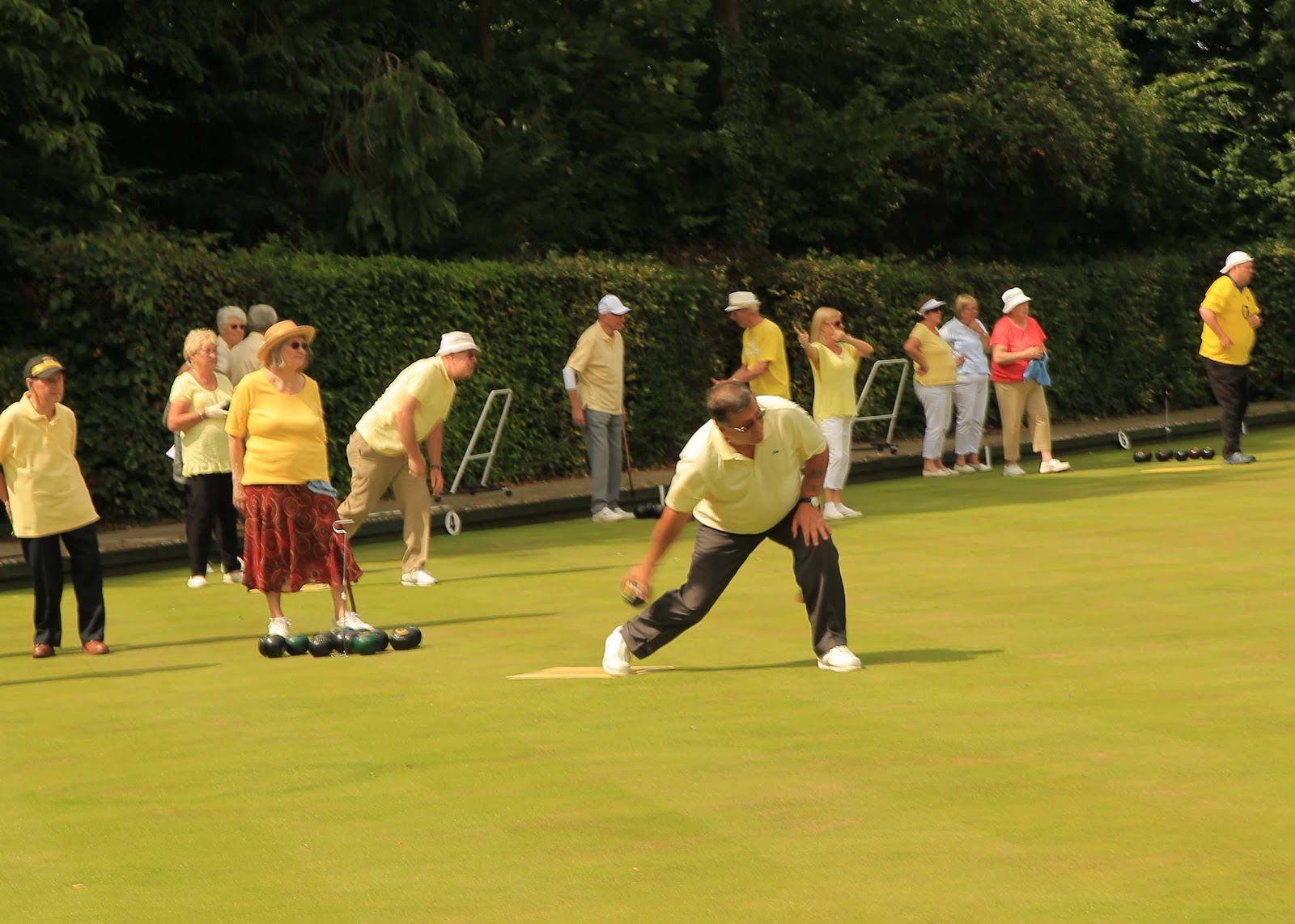 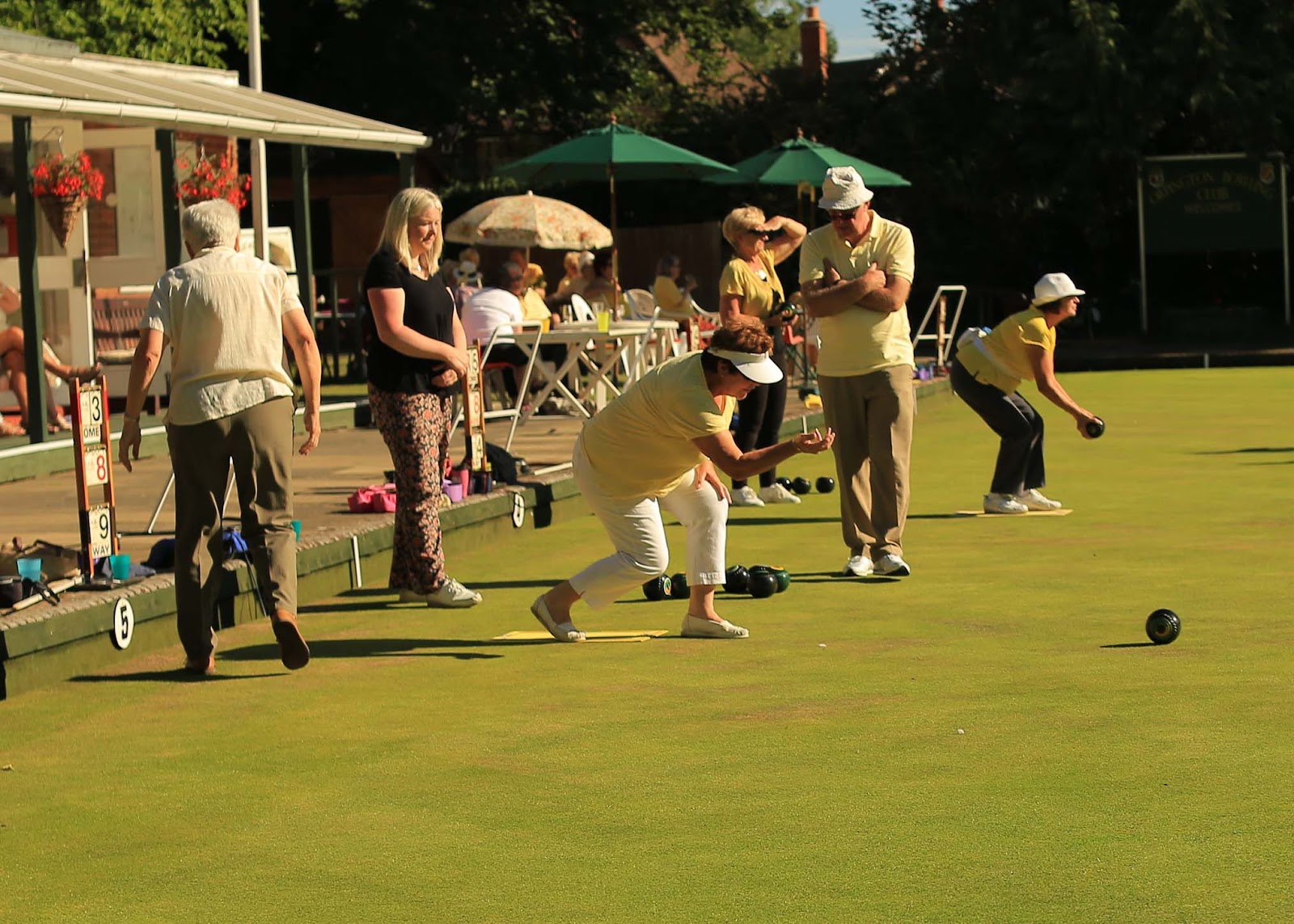 After months of eager anticipation, the tour group gathered  at the unearthly hour of 5.00 a.m at the bottom of Spur Road on Monday 20 April. Everybody arrived in good time with two exceptions but it was a very early start so it would be unfair to name and shame the latecomers.

Once the Pollards had finally arrived, the coach set off on its lonely journey to the airport. The only other vehicles on the road were driven by the regular group of insomniacs who circumnavigate the M25 (once the Circle Line has closed for the night).

All the travel arrangements went smoothly but, just before take- off, Ron Jeffery informed the group that, although he had sailed around the world three times, he had never flown before. Unfortunately for Ron we were travelling by Monarch Airlines rather than Virgin which would obviously have been more appropriate. The Woolacott’s ( Carol and Tony) had made arrangements to travel separately to the airport and  booked seats as far away as possible from the rest of the group. Unfortunately for them, once Ron had made his announcement, there was an exodus from the seats around Ron and everybody made their way to the back of the plane to join Carol and Tony. 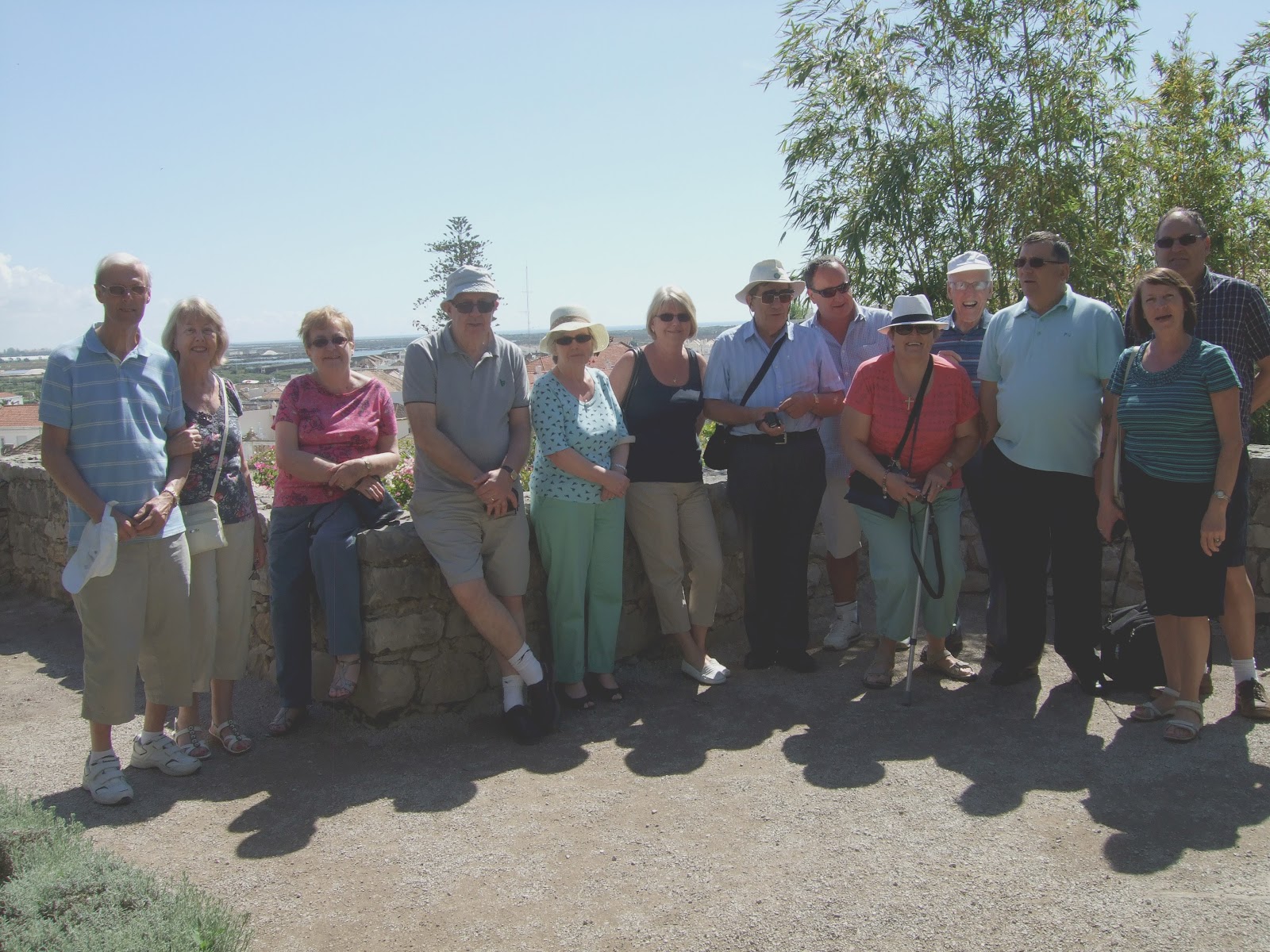 The flight and hotel transfer arrangements all went without a hitch and by midday, the majority were on the  verandah of the Hotel Dom Jose in Quarteira  sipping wine and having a spot of lunch. All the hotel rooms had a sea view and balcony and were of roughly uniform size which was good news for the  single occupants and especially good news for Phil Connell’s teddy who, for once, had his own bed. Things were a bit tighter for those sharing a room with the women utilising the wardrobe and cupboard space and the men utilising the rail at the front of the balcony.

“ Bowling Abroad”  along with Ladies Captain, Mo Jordan had made all the arrangements and had put together an itinerary that combined matches with tours of local towns plus a couple of free days. There were four scheduled matches, the results of which are detailed further below but, in very brief summary, this is how the rest of the tour unfolded:

The whole group stayed together on most evenings either drinking and socialising in the hotel bar  (having re- arranged most of the furniture ) or playing cards in the TV room. The world record for the number of people playing “chase the ace” was broken on several occasions with the dealer sometimes  having to walk up to 30 yards just to distribute the cards.

On Wednesday 15th, which was a free day, the majority went to the local market in Quarteira ; Dennis Storey was kind enough to escort Ron but there were no takers (presumably because of his age) so he had to bring him back again ! . In the evening, the hotel had arranged for a couple of local dancers to entertain those in the bar. Unfortunately the booked act couldn’t attend and were replaced by a couple from the local traffic police.

The group awoke on Thursday  16th to wonderful news ;  Colin Stock had found  the instruction booklet for his camera . Celebrations continued all day and well into the night.

On Friday 17th, the majority visited Villamoura, a lively resort only a short distance down the coast from Quarteira, with a casino, a marina and a plethora of waterside restaurants. In the evening, some of the group met up with our old friends Peter and Jean King who now reside in Portugal for the majority of the year. 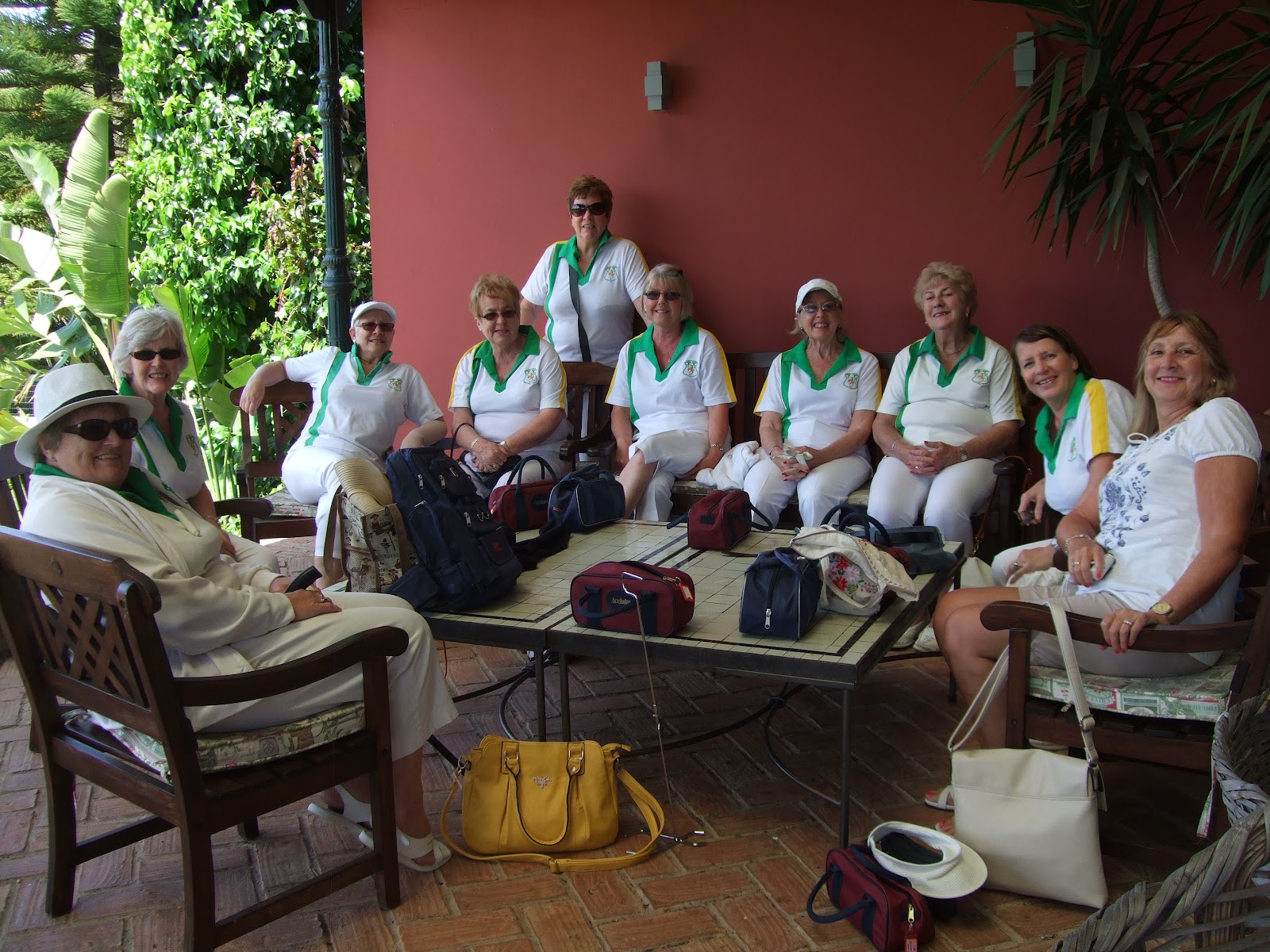 On Saturday 18th , “Bowling Abroad”  had arranged for the group to dine in a local restaurant in Quarteira rather than in the hotel which provided a welcome change of scenery albeit no respite from the barrage of food consumed as the portion sizes defeated even the heartiest of eaters.

The tour concluded on the Sunday in Alvor at the home club of Peter and Jean followed by a lavish barbecue and the presentations.

The key to the success of the trip was the camaraderie of the whole group throughout the week but  special mention must go to the following:

Sarah and Ron from “Bowling Abroad” who ensured everything went smoothly in Portugal;

Yvonne who supported the team at all the matches; 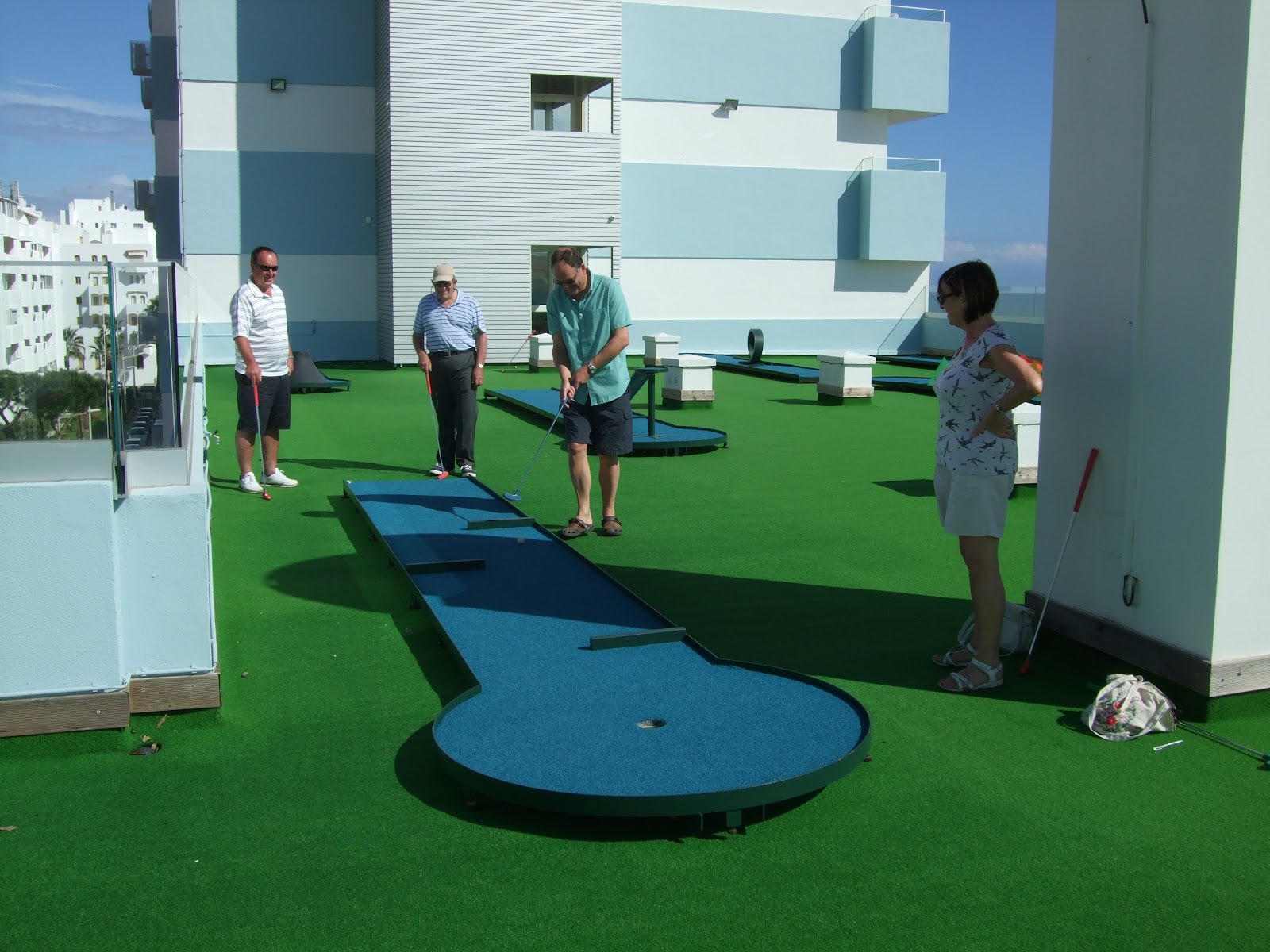 Peter and Jean King who attended  two matches as supporters and  made everyone very welcome at their home club of Santo Antonio;

Ron and Joan Woodhams  from Bromley Common BC who fitted in seamlessly with the Goddington gang;

and finally, all the participants from Orpington BC  who made the week such a success.

PS  Phil forgot to mention our wonderful train journey along the streets of Canela where we viewed various areas with workmen drifting in and out of the rubble and a choice of demolition sites along the route. Although the piped pan music took some of the negativity away-didn’t it? Tony certainly liked it, singing along with all the tunes or shall we shall one long monotonous tune, BUT it was a lovely yellow train!