Official Rules for A Day at the Beach

Make 2 sets of blue cards in front of you to win!   It’ll say on each Blue Card how many are in a set.

Deal 6 cards to each player (as their hand) and 8 cards face-up as The Ocean.   The Discard pile is face up next to the deck (reuse if you finish the deck). 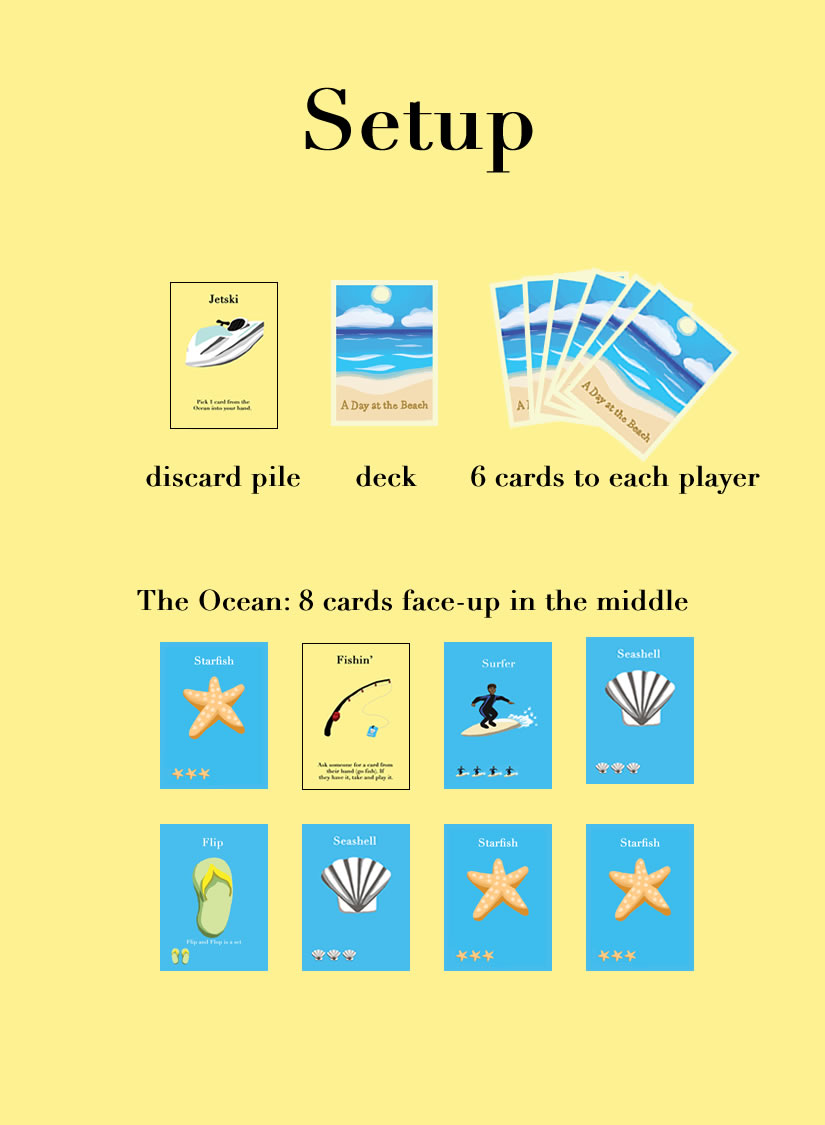 The number of cards in your hand and the ocean will change over time.

Every turn draw a card from deck then play a card.

Blue cards: Played in front of you to make sets

Yellow cards: Action cards - discard when played.  After you play “The Wave”, take another turn!

The first game, the person most recently at the beach goes first.  After that, the winner goes last.

And most importantly: please enjoy A Day at the Beach!!! 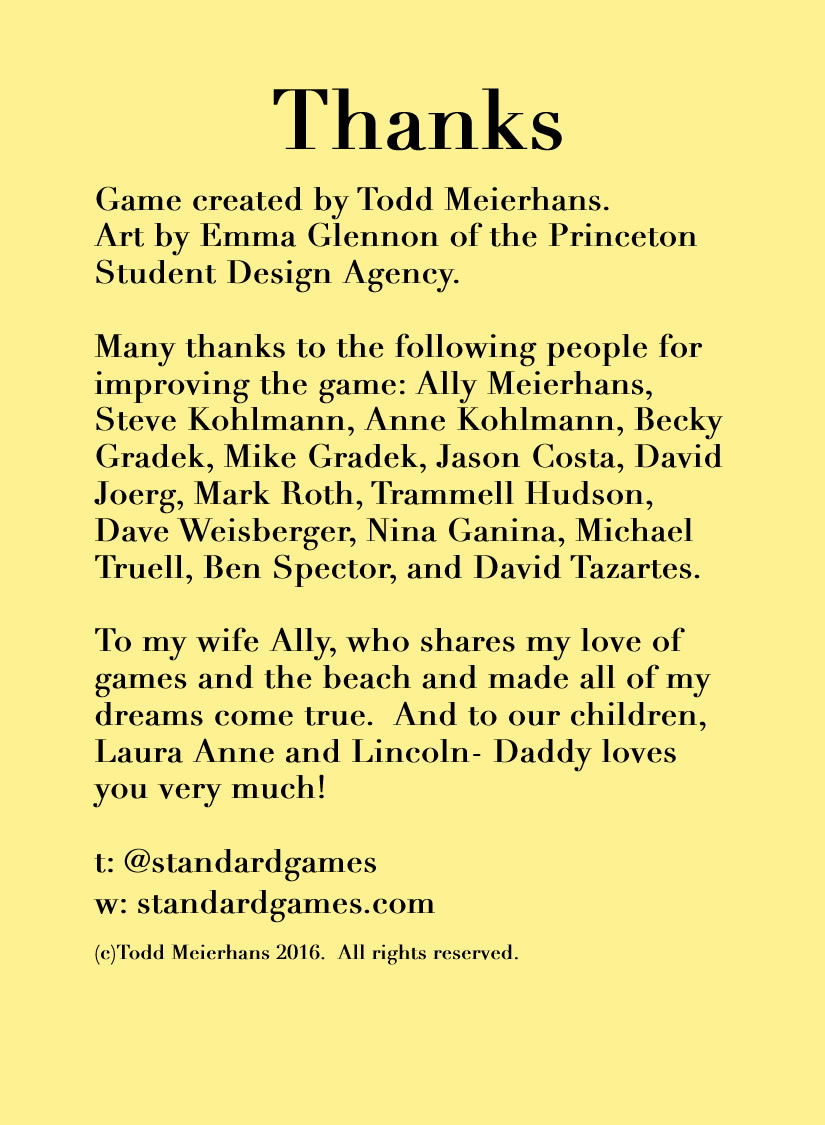 When you draw from the deck at the beginning of your turn, could you also draw from the ocean? Or is the ocean reserved for the yellow cards that allow that?

You need a yellow card to draw from the ocean.

Can I play 2 blue cards in a single turn?

Each turn - draw one card, then play one card.  You can only play one blue card per turn.  Even if playing multiple blue cards is a set or would complete a set.

How do I know what’s in a set?

A set is always the same type of card (though Flip gets paired with Flop, and Cone gets paired with Scoop).  It will say on the blue card what is a set and how many are needed to make a set.  Treasure Chest is the only blue card that’s a set by itself.

What happens with the cards in my hand at the end of the game?

Nothing - there’s no penalty.

Can I have 2 sets of the same type of card?

Yes, if you have 8 Surfers for example, that counts as 2 sets of 4.  These should be rare though.

Where do I play cards?

It’s like Rummy 500 - play Blue Cards in front of you.  Play all of the same type of Blue Card in one pile.   But the difference is that you play one card at a time - before you have a set.

Can a completed set be taken?

Yes - cards can be taken from a completed set.

How many piles of Blue Cards can I make?

There’s no limit to the number of types of piles of Blue Cards you can play in front of you.

Is there a maximum number of cards in my hand?

Can I play extra cards at the end of a completed set (like another surfer)?

Yes - that way if someone steals one, you still have a set.  For example, you could play 5 Surfers, even though 4 is a set.

When I play The Wave, do I draw another card from the deck?

Yes - take a whole new turn including drawing from the deck.   The Wave is a nice card :)

When I play the Beach Ball or Paddle Ball, what happens to them?

Like all action cards, they are discarded when played.

What if we run out of cards in the Ocean?

The only way to add cards to the Ocean is to play The Wave (or Beach Ball).  Otherwise the Ocean doesn’t get new cards.   You do not replenish the Ocean after someone draws from it.

For cards like the "Pirate" that allow you to "steal," does that mean take form another player only or could you also "steal" from the Ocean?

Pirates and other steal cards can take played cards from other players only.

How do I buy another deck?

Are you open to licensing the game for wider distribution?

Agree to any of these prior to the start of the game - otherwise - they’re not the rules unless you say upfront that they are.

Despite feedback to the contrary after testing we are:

Email or tweet me (@standardgames) with any ideas for rules or card improvements!

https://www.youtube.com/watch?v=KIpq8ymGMmU (Review from The Board Game Vault)

Other Ideas to Improve:

Other potential art to get for v2:

Most recent version at: C:\Users\todd\Documents\_Games\_ADayAtTheBeach\ADayattheBeach_20170115

Each expansion pack could have a beach towel with the name of the set, and could be named after a beach, like:

See “Press and Contacts for A Day at the Beach”