All Answer are in complete sentences and are in purple

Directions: Below you will find several documents related to Locke’s Social Contract and the Declaration of Independence. Read each document and answer the questions related to the document. You will then be expected to write an essay answering the question you are given, using information from the documents and you knowledge of this time period.

“Men have rights by their nature*. .. We give up our right to ourselves exact [revenge] for crimes in return for [nonjudgmental] justice backed by overwhelming force. We retain the right to life and liberty, and gain the right to just, impartial protection of our property."

". Society creates order and grants the state its [purpose]... The only important role of the government  is to ensure that justice is seen to be done"*

"If a ruler seeks absolute power, if the acts both as judge and participant in disputes, he puts himself in a state of war with his subjects and we have the right and the duty to kill such rulers and their servants."*

DBQ 1. What rights are all men entitled to according to Locke?

DBQ 2. According to Locke what is the purpose of a government?

DBQ 3. According to Locke what do citizens have the right too if their ruler is abusing power?

DBQ 4. According Locke why would falsely people believe they do not have the right to use force?

Answer: You can Skip this Question

“We hold these truths to be [obvious], that all men are created equal, that they are [entitled] by their Creator with certain [mandatory*] Rights, that among these are Life, Liberty, and the pursuit of Happiness. "

"That to [protect] these rights, Governments are [created] [by] Men, [coming] [from] their [own] powers from the [permission] of the [people]."

"That whenever any Form of Government becomes destructive of these [rights], it is the Right of the People to [change] *or to [get] [ride] [of] [it], and to [create] [a] new Government"

"We, therefore, the [elected][officials]of the United States of America, in ...[promise] publish and declare, That these United Colonies are, and ... [should] be Free and Independent States"

DBQ 5. According to the document what rights do all men have?

DBQ 6. What is the purpose of a Government in the document?

DBQ 7. What is suggested that people should do if their government is abusing its power?

DBQ 8. What was Americas response in the document to the king’s abuse of power?

Document 3 Use the image below to answer the following questions: 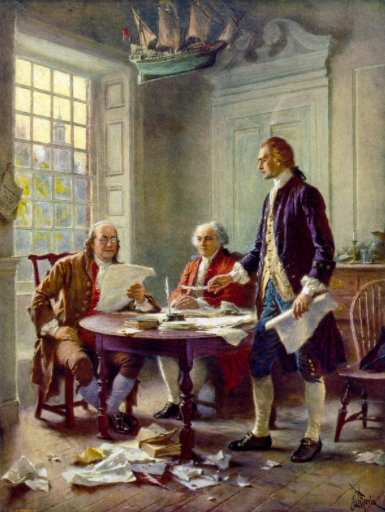 DBQ 9. The creation of what document is depicted in the picture?

This is easy you don’t need help

DBQ 10. Who is the Author of this Document?

DBQ 11. What do the papers on the floor suggest about this document?

These questions relate to the political cartoon below:

DBQ 12. What Image is depicted in this Political Cartoon?

DBQ 13. What do the segments represent?

DBQ 14. What issue is the slogan referring to?

DBQ 15. Who is the Author of this cartoon?

John Trumbull was an American painter, architect, and author, whose paintings of major episodes in the American Revolution form a unique record of that conflict's events and participants. This painting depicts the presentation of the Declaration of Independence to the Continental Congress. The five men in the middle are the committee of men who drafted the document. The committee consisted of Thomas Jefferson (the primary author), Benjamin Franklin, John Adams, Robert R. Livingston and Roger Sherman. 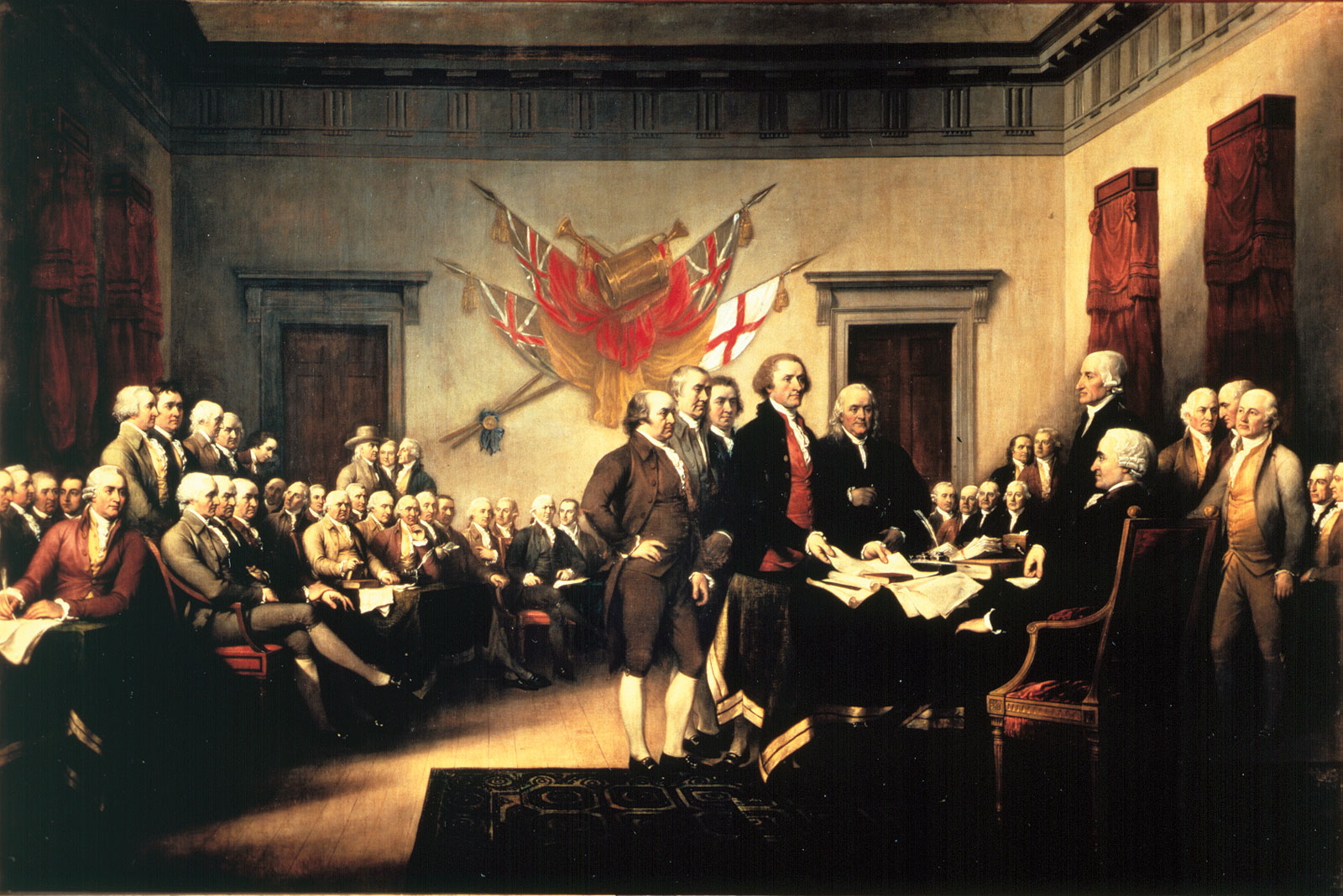 DBQ 16. Who are the five men standing in the middle of the room?

DBQ 17. Who do you think the other men are in the room? 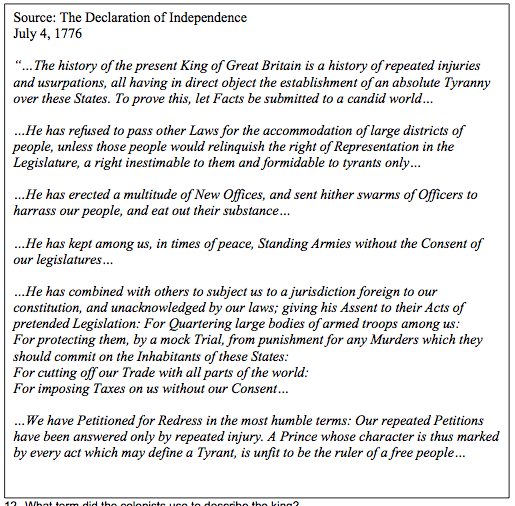 DBQ 18. What term did the colonists use to describe the king?

DBQ 19. Summarize the grievances (complaints) the colonists had with the king.

DBQ 20. Which section of the Declaration of Independence is the largest?

1) Based on the language of The Declaration of Independence, it is most likely that this document contributed to the development of democracy by *

B) allowing women to take part in government.

C) suggesting that people are the source of power.

2) According to the Declaration of Independence, the people have the right to alter or abolish a government if that government *

A) is a limited monarchy.

D)  favors one religion over another.

3) Which fundamental political idea is expressed in the Declaration of Independence? *

A) The government should guarantee every citizen economic security.

B) The central government and state governments should have equal power.

C)  If the government denies its people certain basic rights, that government can be overthrown.

D) Rulers derive their right to govern from God and are therefore bound to govern in the nation’s best interest.

4) Which phrase from the Declaration of Independence most clearly reflects the idea that the people are the source of government? *

D)  ''. . . governments long established should not be changed for light and transient causes . . . "

5) According to the Declaration of Independence, governments are established to *

A) protect the nation from invasion

B)  guarantee voting rights for all citizens

D)  provide a system of checks and balances

A)  guaranteeing trial by jury to all men

B) providing for Presidential elections every four years

D)  indicating that people are the source of power

7) Which principle of government is proposed in the Declaration of Independence? *

A) Political power originates with a strong central government.

B) Individual liberties must be guaranteed by a strong bill of rights.

C) The primary function of government is to protect natural rights.

D) A system of checks and balances is the most effective way to prevent governmental abuse of power.

8) "That to secure these rights, governments are instituted among men, deriving their just powers from the consent of the governed." This statement from the Declaration of Independence indicates that government has a responsibility to *

B) provide for the defense of the nation

C) respond to the will of the people

D) control the lives of citizens