Click here for a copy of this document on which you can make comments and suggest edits.

This tutorial demonstrates how to develop a Photo Booth app. You’ll build an app that lets you take pictures, assign pictures to canvases and share pictures via email. When a picture is taken, it will display in one of 4 canvases. When all canvases have been assigned pictures, the next picture assignment will rotate back to first canvas.

The completed app will look like the figure below: 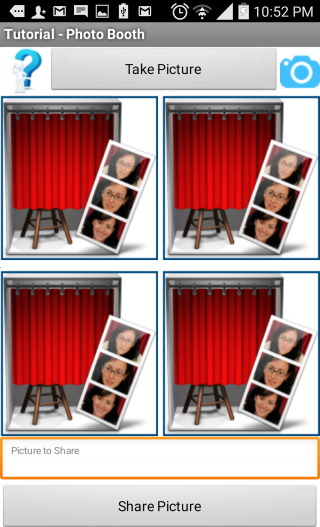 Make sure your computer and your phone are set up to use App Inventor. Start a new project in the Designer window, and name it "PhotoBooth".  Connect to Phone, and make sure the phone has started the showing the App Inventor project.

In the Designer, click on the Layout category to view all the App Inventor layout components.  Select HorizontalArrangement layout and drop it onto designer viewer. From the properties panel set the Width of this layout to “Fill parent”.

Next, from “User Interface” drawer, select and drop three buttons into this layout and set their properties as follows: 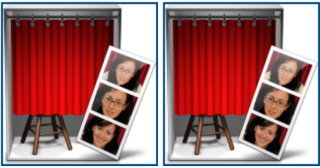 Finally, we will need 3 non-visible components:

You have added Button, Canvas, TextBox and non-visible components. Its now time to define how the components behave.

This button is used to display help information using Notifier component. Once this button is tapped, we will display usage-information. Since our help-text is long, we use a “join” block (Text drawer) to join our help-text. Note that “join” has a mutator icon, that lets you add additional slots for more input to join. For a complete explanation of mutators, refer to documentation HERE.

Initializing global variable: From the Built-in Variables drawer, select “initialize global name to” block. Change its name to canvasNum. Next, from Math drawer select “0” number block and plug into socket of the new variable block:

Starting the camera: When either btnTakePicture or btnCamera buttons are clicked, we will use their associated Click event handler to capture the event and start the camera using Camera1.TakePicture block:

Saving pictures as canvas backgrounds: After a picture is taken and accepted, the Camera.AfterPicture event will be triggered. In this event, the global variable canvasNum is incremented by 1. This will allow us to rotate the canvas and save, as background, to Canvas1 through Canvas4. When canvasNum exceeds 4, we set it back to 1 so that we can save the picture back to Canvas1 background. To keep the code modularized, we use a procedure that can accept an image as argument (the full image path of the just-taken picture).

Using the Built-in Procedures drawer, select “Procedure” block and add into blocks-editor viewer. The procedure back has a mutator.  The figure below shows how to use the mutator to construct the required procedure setPictureToCanvas.

The blocks in the procedure will need to inspect the value of our global index, canvasNum. If this value is 1, then we set the designated image (path) to be the  background of Canvas1, if canvasNum is 2, we set it as the background of Canvas2, and so on. For purpose of this tutorial, we will use and if-then-else block. The completed code will look like figure below. 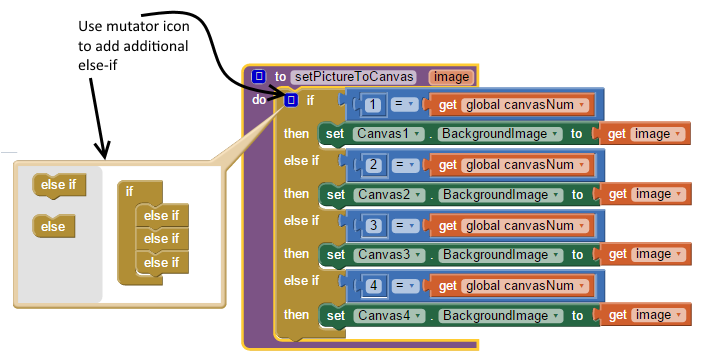 The setPictureToCanvas procedure will need to be invoked after a picture is taken (Camera1.AfterPicture). In this event handler, we increment our global variable “canvasNum” by 1.

Next, we inspect if the resulting value is greater than 4. If so, we set it back to 1.

The Camera.AfterPicture event handler passes a parameter called “image” which is the full path of the picture that was just taken. Knowing this, we invoke our “setPictureToCanvas” procedure passing this “image” parameter to it. The full block-code for Camera1.AfterPicture is shown in figure below:

Now, every time a picture is taken, it will display in Canvas1, then Canvas2, then Canvas3, then Canvas4 and back to will reset back to Canvas1.

Sharing pictures:  For an additional feature of the photo booth app, we will allow users to share a picture by selecting it (via tapping on a canvas) and then  tapping on the “Share Picture” button. To capture the canvas touch events, we use Canvas.Touched event handler. This event handler is triggered every time the canvas is touched. Canvas also includes a block property called Canvas.BackgroundImage which returns the full image-path of the image that is assigned to its background. We retrieve the image-path and display it in our TextBox (txtPictureToShare):

The completed block-code for handling the touch events on all 4 canvas is shown in figure below. Note that the code for all 4 canvases are same with exception of canvas name:

The final functionality to implement is to share the picture via Sharing component. When btnSharePicture is clicked, we need to check if a valid picture was selected. A valid picture would mean that its full-path starts-with “file:///”. For this, we use the “contains” block in the Built-in Text drawer.

If the path includes “file:///”, then we use “Sharing.ShareFileWithMessage” block and pass it the full image path and message-body.

If the path is invalid (doesn’t include “file:///”, we display an alert message using “Notifier.ShowAlert” block.