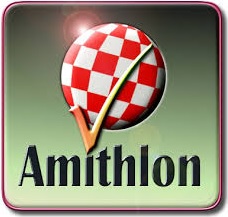 ROMsplit will soon be able to handle the Amithlon kickstart allowing you to use Remus to create a Kickstart for Amithlon.  I’ll be working to see what modules can be updated and then you can compile a Kickstart with the updates and insert the new kickstart into smallird.gz (or bigird.gz if rebuilding the Amithlon Install CD).  Directions for replacing the shape.rom in Amithlon are included in the information below for patching the ROM.

How to Modify the Kickstart ROM in Amithlon

This article is fairly technical and assumes you know your way around an Amiga, can un-lha files and use a shell. More so, since Linux must also be used, you'll either need access to a Linux machine or install a version of linux yourself. You can typically buy a copy of Linux at computer swap meets, your local newsagency, or visit the local library. The library usually have books on Linux with Linux on CD's and there are Amiga versions of Linux.

First, "why would you want to modify the Amiga ROM used by Amithlon?"

My answer to that question is, "Because the code used in the ROM isn't perfect and many developers have written improvements that can be inserted into the ROM to add new functions and fix bugs."

Unfortunately the tools to insert the ROM improvements are based around using a CPU card with "shadowing ability", which is the ability to copy the ROM into RAM memory.

So what do we do to overcome the lack of a CPU card in Amithlon? We grab a copy of the ROM from Amithlon while Amithlon is up and running. Then we apply the required patches to the ROM and save the ROM with the name "shape.rom" to a floppy disk. The ROM in Amithlon is named shape.rom because it's had modifications applied so the Macintosh emulation Shapeshifter will run.

The patches we will be applying are the exec44.1beta4 update, various modules from the Blizkick archive and PowerWindows Next Generation, (see the end of the article for the names and locations of the archives)

In the PowerWindows directory, locate the tools/shell directory and copy the files, "SaveROM" and "PatchROMforPW" to Ram:

Ram: is the working directory I'll be using for the purpose of this article.

From a shell, type

The above lines set the current directory to ram: and saves the Amithlon kickstart ROM as a file named "ks".

Unarchive the exec44.1beta4 update and copy these files to ram:

From the shell again execute the following lines

The above lines set the current directory to ram:, patch the Amithlon ROM with the exec update for the A2000 and save the patched file to ram: with the name of "shape.rom1".

Next we patch the ROM for Power Windows. Execute the following line, note it's a single line.

This line patches our shape.rom1 (or ks)  with the patch required for PowerWindowsNG to do it's magic stuff and saves it as "shape.rom1_pw".

The second patch is done !

Unarchive the Blizkick package and copy "applypatch" and the following modules to ram:

These are the modules that can be applied to our ROM to enhance and fix bugs.

Type the following lines in a shell,

Note this is a single line.

We now have a ROM for Amithlon that's had the exec core updated, has the PowerWindowsNG patch needed to enable PowerWindowsNG to move windows out of the screen and has 4 other enhancements and bug fix patches applied from the Blizkick archive.

The best thing to do now is to copy all the patched roms to a storage directory and our final ROM, the shape.roml_pw_bliz ROM, we rename to shape.rom and copy it to a PC 1.44 format floppy disk.

We then copy the Amithlon boot file "Smallird.gz" to the same floppy.

So now we have a floppy disk with 2 files on it. One is the modified Amiga ROM we want Amithlon to use (called shape.rom) and the other is the Amithlon boot file we want to insert the ROM into (Smallird.gz). The next step requires a linux install so we can decompress "Smallird.gz" and mount it as a file system. Once Smallird is mounted as a file system we will have access to the directories inside it and will be able to copy over the original shape.rom with our own modified shape.rom.

mount your floppy and copy the smallird.gz file to "/"

From your Linux shell use the following command sequence.

cd / command takes you to the system root.

losetup /dev/loop0 /smallird command sets up the file "smallird" as a loop device.

Next we locate the Amiga ROM by looking in the /aim directories for "shape.rom" and copy our modified shape.rom overtop of the original. Once the ROM has been replaced execute the following commands.

cd / this again moves us to the system root directory.

umount /dev/loop0 unmounts the loop0 device from the /aim directory.

gzip -best smallird rezips the smallird file using the best compression. Note that there are two "-" in front of "best".

A new smallird.gz file appears in the system root / directory that should be slightly smaller then the original.

Transfer the new smallird.gz file to a floppy and place it in your Amithlon dos boot partition, being sure to rename your original smallird.gz file first so it isn't accidentally overwritten.

Boot Amithlon and enjoy the use of a more stable system and the new functionality of "Power Windows".

Blizkick can be found at

I was unable to locate exec44.1b4 and there may be a newer version??