As the performances of Diaz Lewis and Ayana Evans happen, I noticed that slowly more and more people are appearing with stamps on their bodies that read, “Everybody Hates A Tourist”. As Ayana Evans’ performance comes to a conclusion, Joseph Ravens announced that if you want free beer, you must get a stamp from the garage. People slowly begin to wander outside to the garage where two men, Adam Brooks and Mathew Wilson, stand wearing handsome black suits from Men’s Warehouse. As music plays, they are stamping people and filling cups from the keg. When a new song plays, they announce a president’s name. It turns out this was a playlist made called “Presidential Playlist” which included the favorite songs of the last 11 presidents from former President Kennedy to current President Trump. https://open.spotify.com/user/adambrooks9/playlist/1kzT5oaML8FJDHN4FDgoTC 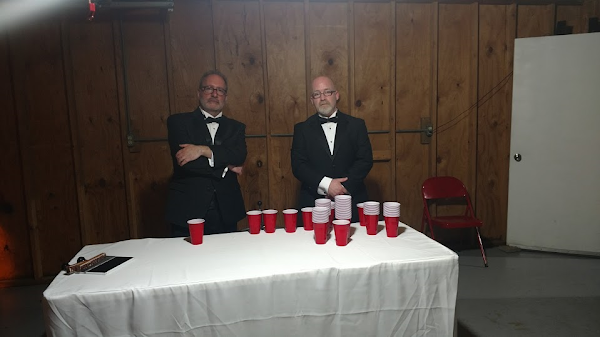 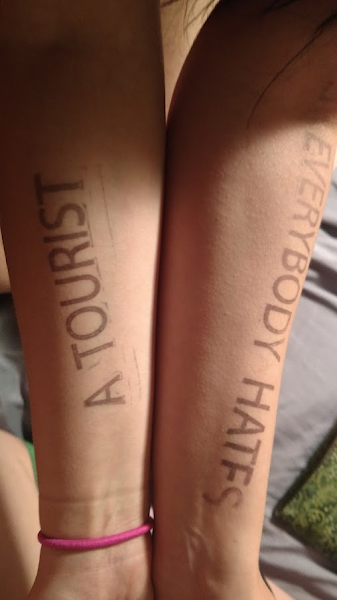 If we were not at a performance festival, someone may have had a hard time telling that this was a performance. Industry of the Ordinary’s works focus on ideas around the quotidian and challenging our notions of what that means. Over the last hundred years, art and life have blended together more and more. Especially in performance, it can be hard to tell where this line starts and ends or if there even is a line.

Industry of the Ordinary continues to blur this line for us. Can something as simple as stamping, handing out beer, and playing a playlist be considered art? The answer is yes. By ‘performing’ something as normal or unusual as this, it forces those who encounter it to think about what they are encountering. By focusing viewers to consider what the ‘normal’ encounter may mean, they are causing this experience to no longer be part of the ‘normal’. We typically do not question customary or ordinary events in our lives. For example, when we get stamped to go into a bar on a Friday night, we do not ask why we are being stamped, we take our stamp and move on. When ordinary events begin to get questioned, this typical event becomes something more than it would be otherwise. As explained in their manifesto, “[the] ... emphasis is on challenging pejorative notions of the ordinary and, in doing so, moving beyond the quotidian”.  Through use of their suits, music, stamps, and beer, Industry of the Ordinary manifests ordinariness into something more than the normal.

This is not Industry of the Ordinary’s first use of stamps. A couple examples of their work that used stamps are; Body Language (2012), United Nations (2012), Foreign Affairs (2012), and Relative (2015). Using stamps is nothing new to this duo. I think using something as simple as a stamp is a great way to get the audience involved. Getting stamped is something we all have probably experienced before, outside of an encounter with Industry of the Ordinary. It is not only like a kind of souvenir, but it also stimulates conversation between those involved in the performance and not.

So what does “Everybody Hates a Tourist” refer to? It refers to a song called, “Common People” by Pulp. One of the writers of the song is Jarvis Cocker—note the title of the performance. This is a simulating juxtaposition between the favorite songs of the last 11 presidents. The song sings about a girl from Greece who wants to “live like common people”.  The lyric about everyone hating a tourist, goes like this,

“Because you think that poor is cool, Like a dog lying in a corner, they will bite you and never warn you, Look out, they’ll tear your insides out, ‘Cause everyone hates a tourist, Especially one who thinks it’s all such a laugh…”

The connection that I draw from the juxtaposition of “Everyone Hates A Tourist” stamp and the Presidential Playlist is that; all of our Presidents claim to care about the average citizen—or common person, but they are nothing like the average citizen. Typically, our presidents grow up in a wealthy upper class family, and receive way more opportunities than the ‘average’ person. Yet, they always claim that throughout their presidency that they will make changes that will better the life of the common American. Our current president, President Trump, received many votes from ‘average’ blue collar citizens, due to his promises of making their lives better. He related to many blue-collar workers, which is rather strange because President Trump’s life and the life of many common citizens, has nothing in common other than living in America. It could be understood that our presidents play tourist when they make promises of making things better and pretending to fully understand the way the common citizen lives.