Courtney was a woman with many passions, and many of you have dedicated your passions over the last year to keeping her memory alive in lots of different ways.  Below you’ll find some news around these various efforts, along with some ways you can help us continue Courtney’s legacy as we approach the anniversary of her death.

Please join us for the First Annual Courtney’s Day of Service, an afternoon of volunteering and/or outdoor enjoyment and recreation the YMCA Jones Gulch outdoor and environmental science camp. In tribute of Courtney, many of us will gather together to contribute our time and energy towards improving a place that Courtney absolutely adored.  We’ll be building a trail that would connect two existing trails across the Camp. Once completed, this hiking route will take kids through oak woodlands, coastal scrub, along streamside habitats, and through old-growth redwoods. In the space of a few hours, explorers will encounter a diversity of plants and animals, wondrous natural phenomena, and hopefully be enriched, invigorated and inspired - as Courtney always was here.

Signup for additional details or early RSVP at :

Just a few short months ago, the San Joaquin Judges' wine tasting dinner dedicated the profits from their event to support Courtney’s Fund.  The event, a yearly opportunity for judges and their significant others to socialize and support worthy causes, raised nearly $1,000 to support the environmental law initiatives and outreach from The Courtney Harrington LeBoeuf Fund.

Thanks to the incredible generosity of Courtney’s friends, family, and supporters, we were able to raise nearly $65,000 in 2012 to create a sizeable charitable fund to honor Courtney’s legacy.  This year’s fundraising goal is $12,500 - these funds will sustain the Funds’ endowment as we make our initial awards to grantee organizations, including the endowment for Courtney’s Tulane University Environmental Law Scholarship and our new partnership with YMCA Camp Jones Gulch.  Please consider making a tax-deductible donation to Courtney’s Fund to support future initiatives in environmental protection and eliminating the environmental causes of breast cancer.  Together we can make Courtney’s legacy a lasting tribute to her life and the causes she cared about so deeply! 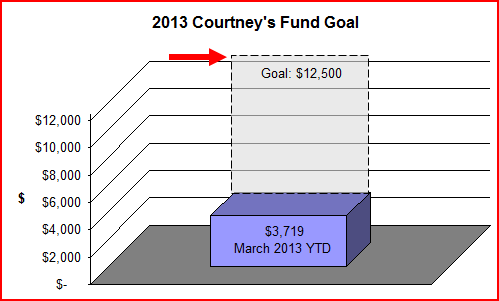 To unsubscribe: reply with the word “unsubscribe” in the subject or body of your email.