A number of us that bridge the digital and policy communities in and around government have come together to talk about making government in the UK more effective by working together under the banner of 'one team government'.

In public services ‘policy’ and ‘digital’ can at times feel like they are different universes, populated by colleagues with significantly different skillsets. But these worlds are colliding, and the working practices and underlying assumptions of both disciplines are likely to be challenged and probably significantly so in coming years. A new cadre of public service reformers are emerging who are rewriting the way in government works and are curious to learn more about each other’s roles. Glimpses of this way of working can be seen in Policy Lab, and in teams from the apprenticeships service and elsewhere.

We are planning an (oversubscribed) unconference on 29 June, but you can sign up to the waiting list as there will no doubt be other events. Our aim is to develop a longer term community and dialogue between the professions. Also watch the hashtag #OneTeamGov.

Some of us who started off in the policy profession like to dig deeper and understand where all this started and how it has evolved, and based on my own experience I started to put together a short reading list for the event aimed at policy colleagues, with what I considered some of the important written pieces about the internet era:

Conscious that there was probably a lot I’d missed I asked on Twitter for suggestions and, as is so often the case, the internet responded with some enthusiasm. And, fabulously and perhaps inevitably, it was pointed out that asking about a reading list for a community like digital was so policy. 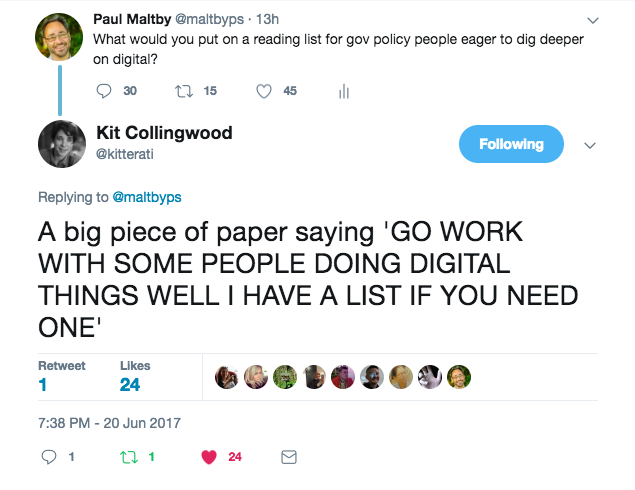 The suggestions I received are set out below, and I’ve roughly grouped them. I know some of these but many are new to me and I haven’t edited the list. This is also a great list of people to follow, if you don’t already.