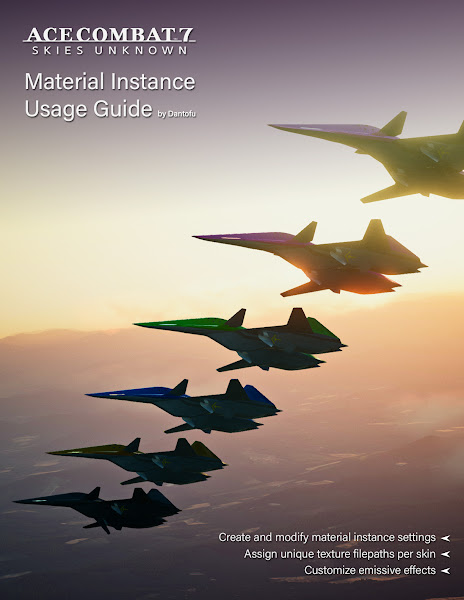 This document is best read with View > Print layout disabled.

4. What are Material Instances?

This guide assumes that you are already familiar with Texture Replacement Guide using Unreal Engine 4, with the knowledge of:

The purpose of this guide is to show how to use the provided Material Instance assets to introduce custom texture filepaths in Ace Combat 7: Skies Unknown.

For Player skins, only one UE4 asset will be modified: One in each aircraft skin folder whose filename ends in _Inst (Such as f16c_01_Inst)

For NPC skins, two assets need to be modified per skin folder: _Inst and _Dam_Inst (Such as f16c_01a_Dam_Inst)

In addition, this guide will also cover how to customize glow effects (To a limited degree) on aircrafts.

Everything needed to create mod for Ace Combat 7:

Gildor’s umodel - Allows file exploration of virtually any game that uses Unreal Engine, including Ace Combat 7. Highly useful for knowing where to place the files.

In 3D art, texture and material are two distinct terms:

3D models traditionally require creation of at least one material before textures can be applied.

In Ace Combat 7, three textures are used as basis for aircraft material:

Standing for Metallic, Roughness, Emission, and Custom data, MREC texture is processed by aircraft material to determine how shiny an aircraft surface appears, and which parts light up during takeoff/landing/refueling minigames.

4. What are Material Instances?

In Unreal Engine 4, material instances are derivatives of an existing material file.

This allows a huge variety of material effects to be created while compiling only the Main Materials. A handful of Main Materials can easily produce hundreds of Material Instances, each with different settings.

In the context of this guide, Material Instance’s primary purpose is to provide texture filepath data to the game.

Navigate to your project folder:

Where [Project Name] is the name given to your project.

Extract and place the Materials and Vehicles folders in Project Asset Files into the Content folder.

If you have Unreal Engine 4 Editor already open, then the Content Browser should automatically update with the new assets.

If not, then close and reopen UE4 Editor. Unfortunately, there does not appear to be an option to directly refresh Content Browser items.

If you are starting a new project, be sure to check that DirectX 11 (SM5) is enabled in Project Settings to allow BC7 texture compression. 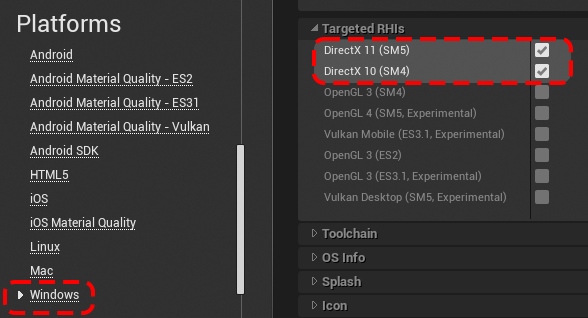 You may have to restart UE4 Editor more than once to see the BC7 texture compression option.

Opening one of the Material Instance assets will open a new window: 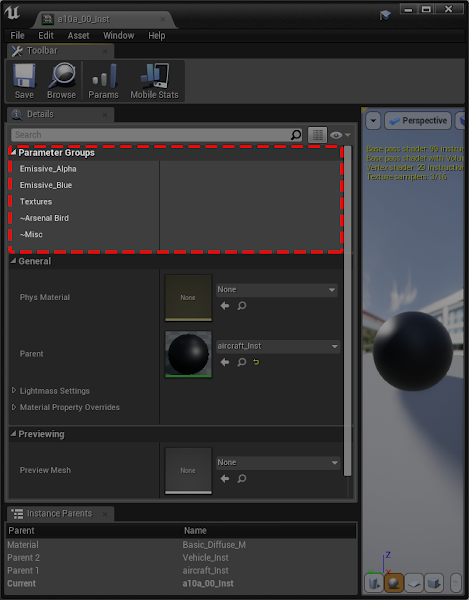 The area highlighted in red is where most of the editing takes place. However, there is nothing visible at first.

On the Toolbar tab, click on the Params tab. You will have to do this every time a Material Instance asset is opened. 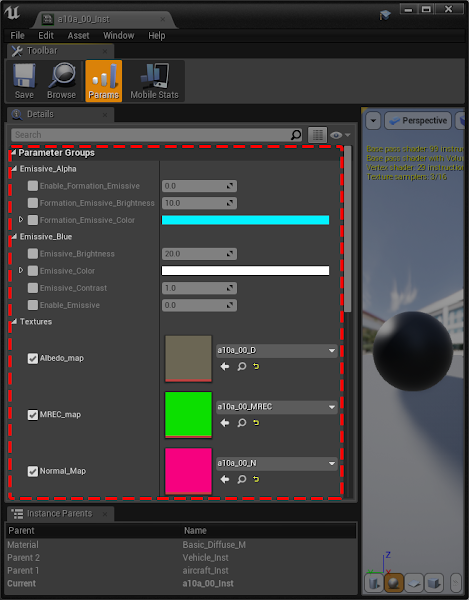 Now all parameters that can be edited will display on what was originally an empty space. 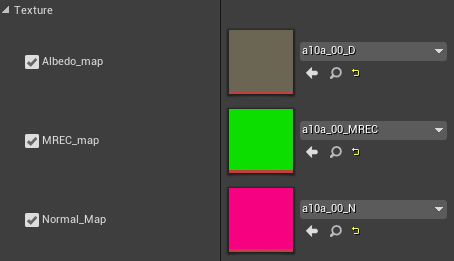 For now, dummy texture assets have been used to fill the parameters.

The dummy textures use the same filepath that Ace Combat 7 uses (Vehicle \ Aircraft \ a10a \ 00), so the game can load the textures that already exist in default installation.

This method is useful for packaging texture mods that do not modify all three texture types, most commonly Normal Map texture.

Using Material Instance, you can assign new texture filepaths placed at any location using any names.

In this example, new Diffuse and MREC textures have been created at Custom Content \ Custom_Texture, along with different texture asset names. 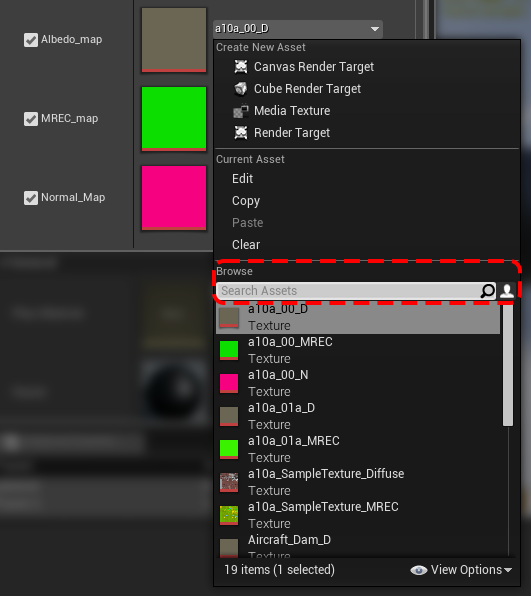 Clicking on the text box opens a drop down menu, listing all the texture assets available.

In the search box, type in the name of the newly-created asset. The browser will automatically update the list containing the entered text.

Click on the matching entry. Albedo_map parameter will be updated with a new texture path.

Repeat the process with MREC_map parameter. 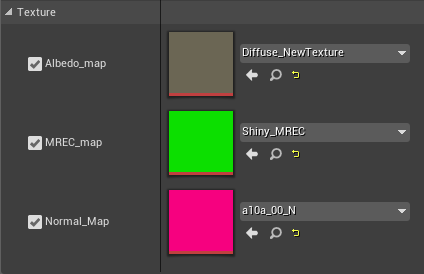 Leave the Normal_Map input to its default value, since the normal map texture will not be modified in this scenario.

When packaging the mod, the folder structure for the example assets above will be as follows:

Where [ModName] is the .pak filename that will be generated.

~Misc contains parameters that can be edited but they appear to have no effect in-game.

The settings are present only because its Parent Material has an input. The groups can be ignored.

After using either approach, all that remains is updating the parameters (Textures, emissive colors).

Import new textures for your mod, and place the new assets in the location of your choosing.

Here, the sample textures have been placed at Custom_Content \ Custom_Texture generated in the previous section.

Assign appropriate settings for Diffuse, MREC, and Normal Map textures. Below table is a summary of relevant settings for each texture type used in Ace Combat 7:

This section will generate new Material Instance asset that will be replacing one for A-10C’s Skin #4 (Mage). 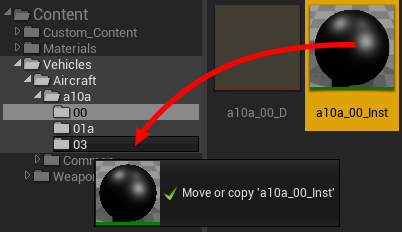 A drop down menu will open asking whether you want to copy or move the asset.

Rename the copied Material Instance to one matching the original file in 03 folder: a10a_03_Inst.

Double click on a10a_03_Inst to open its Material Editor. 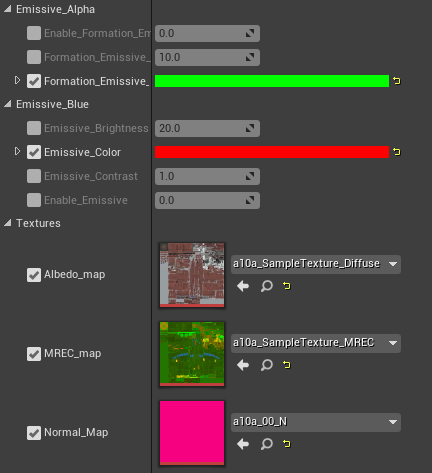 Feel free to edit Emissive settings as well. In this case:

Remember that Enable_Formation_Emissive and Enable_Emissive settings currently have no effect on Player Aircraft.

This section will generate new Material Instance asset that will be replacing one for A-10C’s Skin #5 (Spare). 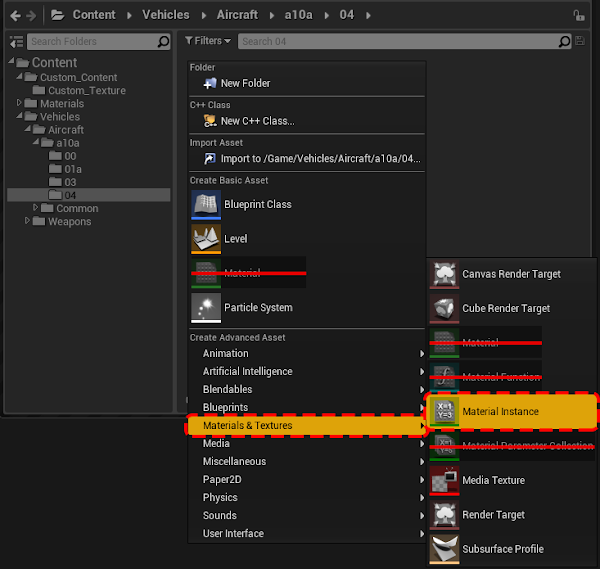 Right click in the empty space, and add a new asset under Materials & Textures > Material Instance. 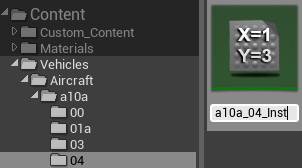 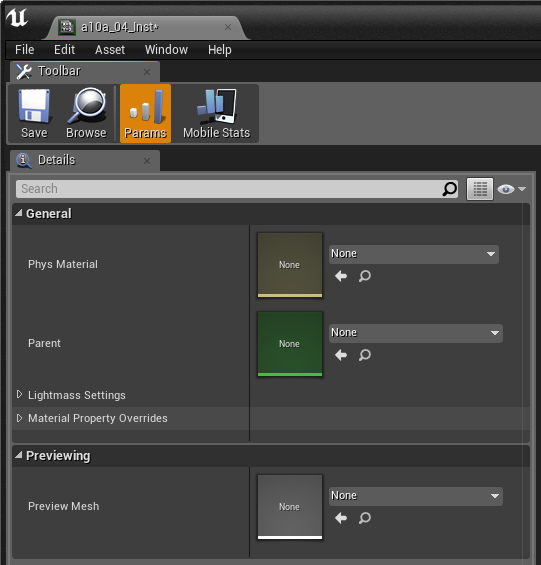 Since this is a freshly-created Material Instance with no Parent Material linked to it, there is nothing to edit, even with Parameters enabled. 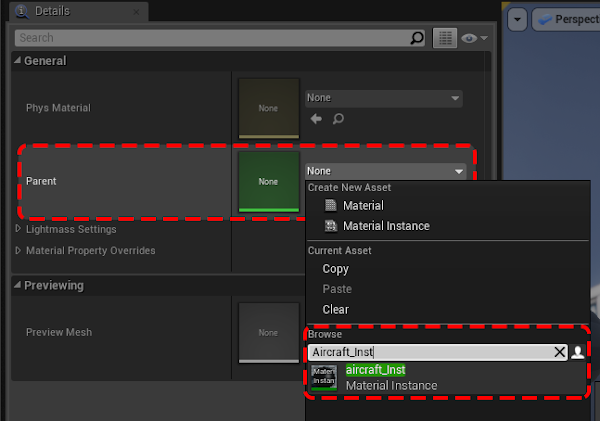 Under General > Parent item, link aircraft_Inst to the parameter (Either using Browse or Drag & Drop). This will assign aircraft_Inst as a10a_04_Inst’s Parent Material. 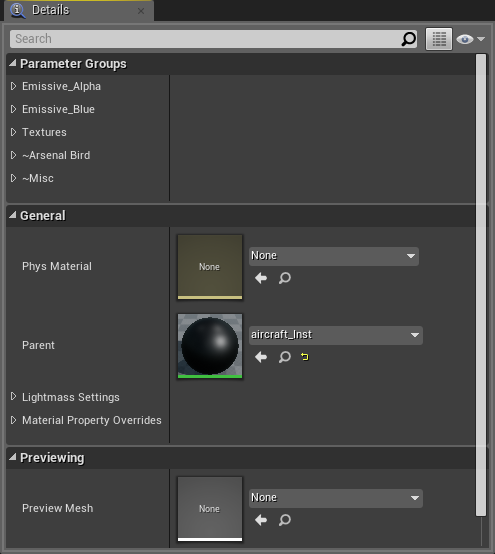 The usual parameter groups should return once aircraft_Inst is linked as a Parent Material. 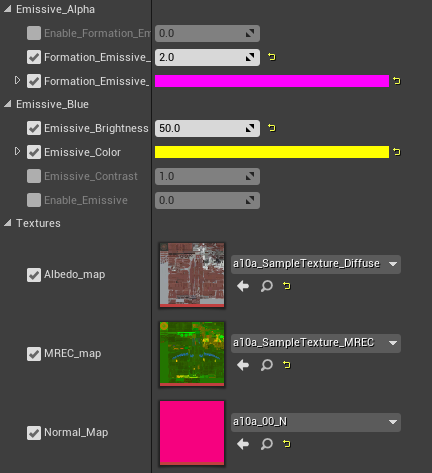 Feel free to edit Emissive settings as well. In this case:

As stated in Section 1. Preface, NPCs require both _Inst and _Dam_Inst to be modified to avoid their textures switching back to default when they are destroyed. 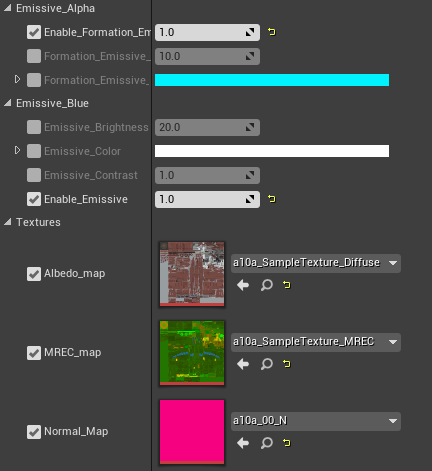 Set both Enable_Formation_Emissive and Enable_Emissive to 1. The Emissive colors have been left to their default values. 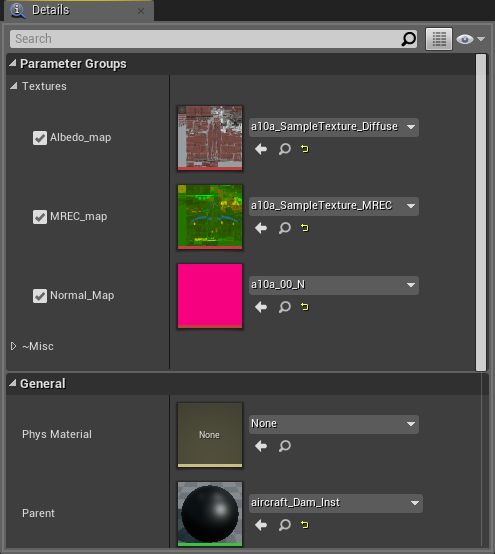 The items in ~Misc contain shared textures used to render damage effects over the object’s texture. It is recommended to leave them alone.

There are no Emissive parameters for _Dam_Inst. Its Parent Material aircraft_Dam_Inst is processed by a different Main Material, which does not support light emission. 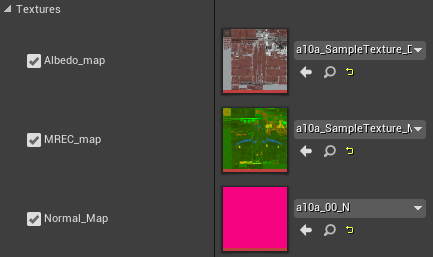 Ensure that all assets in UE4 Editor are saved. If there are any unsaved assets, clicking on Save All in Content Browser will open a confirmation box.

If nothing happens after clicking on Save All, then all assets are up to date. 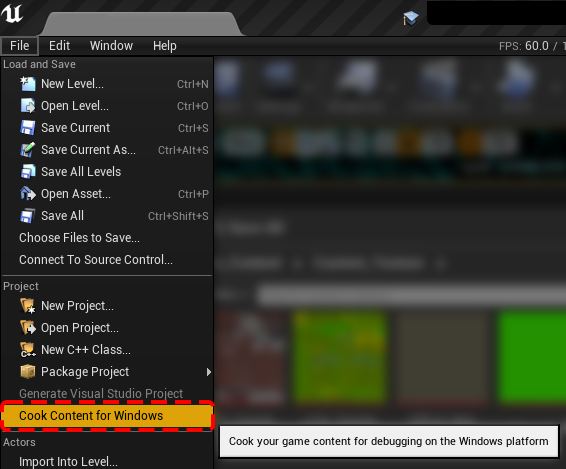 Once the cooking completes, the files will be saved in the following directory:

Where [Project Name] is the project name you have given at Section 5: Importing Assets into UE4 Project.

Therefore, [Textures]_P.pak must always be loaded together with any of the [Skin #]_P.pak.

The “_P” suffix is required because almost all Material Instance assets used by Ace Combat 7 are considered DLC assets due to updates. Having the suffix additionally serves as a fail-safe.

The benefit of this package arrangement is that the bulk of filesize (Texture images) are contained in a single mod, allowing modders to easily introduce Texture changes without having to update every Skin option.

If you are using A-10C Sample Textures, then package its assets in similar layout:

...and so on until all Skin options are covered.

Don’t forget to retain the folder structure when packaging the mod:

...along with additional requirements from the mod packaging tool. For Unrealpak, you will also need an additional folder in front of Nimbus folder, which will be used as .pak filename.

If everything went correctly, A-10C’s Skin #4, 5, and regular enemy NPC will load the modded Diffuse and MREC textures. A-10C’s Skin #1 and 6 should retain their default textures.

In addition, each skin will have a different emissive effect.

Congratulations, the new mod is now ready for release!

If you intend to modify textures for F-16C and MiG-31B’s Skin #6 (Strider), there is one extra step needed during packaging:

The Decal_Inst assets found in Project Asset Files should be placed in the same folder as the Material Instance files.

They’re generally used to control emblem placements used in the Emblem Customization menu, with their immediate Parent Materials being f16c_05_Inst and m31b_05_Inst, respectively. 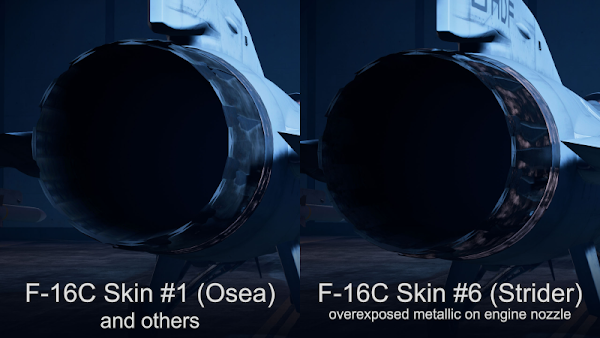 However, the base game assets unintentionally left extra settings in the two files:

The replacement assets provided remove the extra settings, allowing the modified textures to work as intended. 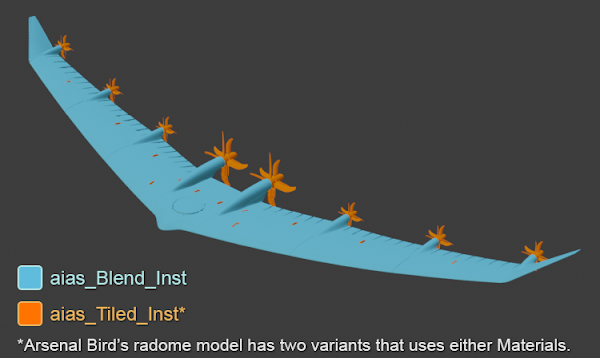 aias_Blend_Inst is processed by Main Material that does not support Emissive effects. As such, Arsenal Bird’s main body is unable to emit light. 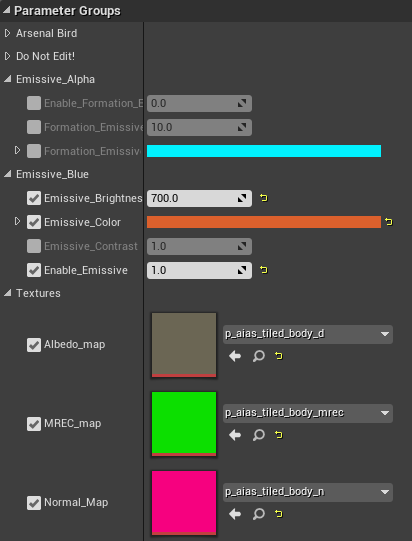 aias_Tiled_Inst’s Parent Material is aircraft_Inst, so it is still possible to introduce Emissive effects that affect those parts of the model.

In fact, the aias_Tiled_Inst already has Emissives enabled, which is used to render a series of glowing rings under the exposed Rectenna base in Mission 19.

All Weapon and Vehicle models come with only one set of textures. Therefore, it is not necessary to give them custom filepaths.

Although Weapons and Ground Vehicles models use different Parent Materials (weapons_Inst and ground_Inst, respectively), they are processed by the same Main Material as aircraft_Inst.

For Ground Vehicles, leave the Normal Map parameter unedited (DefaultNormal), since many do not come with normal map textures.

Like with Weapons and Ground Vehicles, Vessels also come with only one set of textures.

Vessel’s Parent Material is vessels_Inst, and is also processed by the same Main Material as aircraft_Inst.

Some vessel Diffuse textures are saved as DXT5 instead of DXT1 (Such as Aegis). The Alpha Channel is commonly used to render transparencies on handrails. Be sure to check the format to avoid rendering issues!

Some vessels do not come with normal map textures. In this case, leave the Normal Map parameter unedited (DefaultNormal). 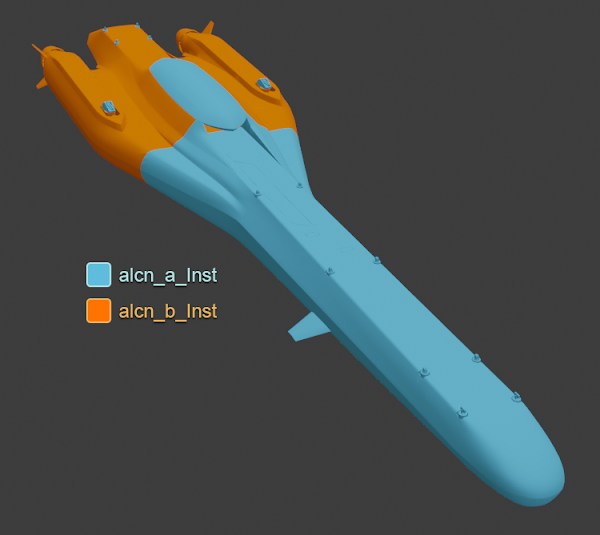 Alicorn also has Material Instances used exclusively for DLC Mission 1: EX01_alcn_a_Inst and EX01_alcn_b_Inst. The only changes are different MREC textures (Both also starting with ex01) with cleaner appearance. 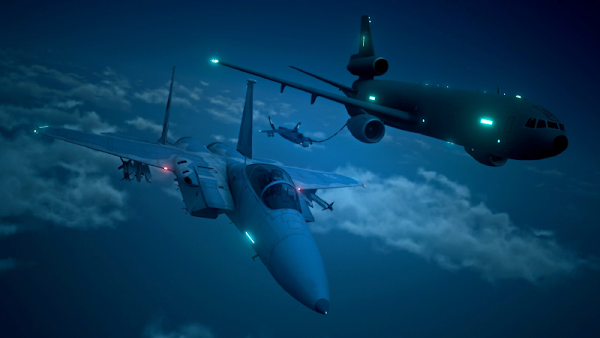 After months of research and writing, another guide has finally come to stage fit for public release. I’ve launched Ace Combat 7 hundreds of times at this point just to test and verify concepts, and I’m really starting to miss the super-fast UI Assault Horizon had.

I wanted to simplify the process as much as possible, but striking a good balance between readability and details proved to be much more difficult compared to the texture replacement process, given how many ways Material modding can go wrong.

Unfortunately, Material Instance Usage Manual will most likely be my final contribution. I will continue to maintain and update my existing content as needed, but I strongly wish to move on from Ace Combat 7 modding.

There’s so much more I wanted to share, but life leaves little to do everything—and I also have prospects that I would like to prioritize.

I would like to extend my thanks to the Ace Community community, for their continued support, discourse, and encouragement.

And to Project Aces and Kazutoki Kono, continuing to deliver Ace Combat experience through both clear and rough skies.