As we all know, the current Covid-19 outbreak is causing a huge amount of uncertainty and concern. This, and the probability of associated public social isolation measures, has lead us to shelve our 2020 gig plans for the time being. We will review the situation when things settle down a bit and the effects of the outbreak becomes more known.

We’re about to start auditions for the keyboards role so if you would like to try out, get in touch soon!

Well folks, that’s this years gigs done and dusted. Was great to see some old faces along the way and meeting new ones too.

An opening has come up in our keyboard dept. and we are currently looking to recruit a keyboardist to join us for 2020. We would like to thank Dan for his hard work over the years in what is undoubtedly one of the most difficult seats in the tribute band world and wish him all the best for the future.

So if you are, or you know anyone who is, a budding Tony Banks please get in contact through our Facebook page or by email to info@afterglow-gtb.com

Hope to see you next year!.

We’ve been working hard on introducing new tracks to the set list for 2019. Let’s just say that if you like the Duke album, you’ll be pleased! Of course, it means “resting” some songs or we would be playing a four hour set.

We’ve just added a date at The Venue in Dumfries to next year’s Scottish Tour. Check out The Gigs page for all the dates in 2019. More to come!

The Scottish Tour went well! Huge thanks to everyone who came along and we hope to be back north of the border next year..

The combination of #thebeastfromtheeast and storm Emma has meant that we've had to postpone the Hanger Farm gig on Saturday.

We will sort out a new date ASAP and tickets will be valid for the new date.

Afterglow has teamed up with Los Endos and Mama to form The Ancient Guild of Genesis Tribute Bands. The idea is to pool resources to promote gigs and generally get a buzz going. Check out the website here and maybe join the forum.

Sad to say but we’ve had to pull the Braintree gig. We were suddenly facing a bunch of additional costs so it wasn’t making financial sense to continue with it. Sorry to all who had bought tickets and we hope we will be able to find a more suitable venue in the locality in the future.

Thank to everyone who came along to the gig at the Hawth last night. It was our first ‘full’ show with our own lighting rig and Pete singing. A lot of Pete’s relatives came along so he was super happy to show them what he’s been up to all these months! We can’t wait to see the  photos.

Head over to the Media page to find a little video from the Talking Heads gig as well as a bunch of photos.

Good news! We’re booked into The Talking Heads again in May next year. Looking forward to it already!

We had a great time playing The Talking Heads last night - our first gig in such a long time and the first with the Pete, or “Irish Phil” as he’s now known! A huge thanks to everyone who came along and we look forward to playing there again soon.

We’ve had the last rehearsal before the first gig with Pete at Talking Heads on the 14th. We’re really looking forward to see what he does on the night as he’s been dropping hints!

Andy has been hard at work booking venues. Head over to the Gigs page to see where we are playing!

Good news! After auditioning a number of excellent vocalists, we are delighted to announce that we have taken on Pete McDonagh as Afterglow’s new singer. We can’t wait to bring you a new set with Pete up front!

Bad News! Nigel’s decided he can’t do it after all. So we’re still looking for someone to fill the singing spot. If you want to try out for the part, get in touch.

Good News! We've managed to acquire the services of Nigel Betteridge to sing with us! It's possible you have already seen Nigel perform as he used to sing with Los Endos - a Genesis Tribute Band that focuses more on the Gabriel era. He's looking forward to singing the later songs and we're looking forward to incorporating dual drum kits into the set!.

It is with much regret that we have to announce that our fantastic vocalist, Richard Still, has decided to leave the band. We would like to thank Richard for everything he's done and hope he will look back on his time with Afterglow as warmly as we do.

So, we are currently looking for a new vocalist! If you would like to offer your services, please get in touch. 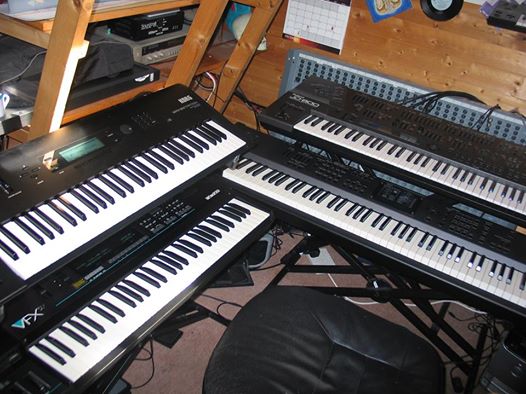 I'd like to introduce the latest member of the family, the Korg Wavestation, to complement its little big brother the Wavestation SR in the rack. I was offered this at a price I couldn't refuse, and after a full stripdown to fix several sticky keys, we now have a fully functional, and pretty much unmarked, original Wavestation. Next step is to change the display backlight, so I can see what performance I'm on during our cracking new lightshow, and then to load up all the sounds used for the '92 tour....

The A90 of course wil dep for the Rhodes MK-80, as a master controller, as I haven't seen one of these for sale for years.

Wavestation SR, to supplement the Wavestation for We Can't Dance era tunes

Korg TR Rack (which supplies just a couple of patches, but very important ones)

Roland JV-1080, which covers most of the patches for pre-1983 material

The arrival of the JD800, VFX, and the Wavestation, allows us to play the later era songs with the original patches, rather than samples, which is really sweet, and a lot more fun.

So - we're working on a couple of new tracks, one of which, all being well, we will debut at Romsey.

Book your tickets now - we want this to be a really happy and enjoyable night - and it's the audience that makes the gig.

So come on and make our gig, and we'll make every effort to make your night!

Like the dust, that settles all around us, we must find a new gig...

We're really sad that we've had to postpone the gig on Saturday 4th October. When people say that things are due to a "situation beyond our control", the natural reaction is "yes, whatever..", but truly and honestly, we cannot influence the outcome of this one. It would be wrong to hold any one individual responsible, and it's done and dusted now. So all we can do is confirm that our Romsey gig on 22nd November will go ahead as planned, and, like the gig at Windlesham, we will put on a full light show and top notch sound. Our light show is growing in scale by the day, and we have exciting plans to bring more songs into the set - so let's have a few suggestions - feel free to chip in any time!

So, to Romsey. As it's likely to be our last gig of 2014, it's not quite Christmas, but we want to have a bit of a party atmosphere - so here's a suggestion. We all went to Genesis gigs, didn't we? We all bought, er, merchandise, didn't we? We can all still get into it, can't we? Well, wear it then, and the best dressed individual, as chosen by our very own Richard Still Collins, will win a free pair of tickets to a gig of their choice in 2015. So - dust off your "A Trick of the Tail" satin tour jackets and your Abacab scarves, and be safe in the knowledge that if you have to spend a teeny bit of time in the gym to get the said tour jacket to zip up, we'll be having to do the same thing, too!!! And that's why we won't be giving out free chocolate surprises...!

We've sold a good many tickets for Romsey so far, but there's still time to bag a premium seat - or 7 if you're bringing an MPV load of friends ..

Finally, tonight, a huge thank you to everyone who came to Windlesham. it was our favourite gig so far - a sell-out, and a privilege to play to such a warm and attentive audience. Best quote of the night, overheard at the bar, "The only grumble I've got is that the bar shut before the band finished." Now that's high praise indeed ! And on that bombshell... keep looking in for updates, and please - share our page with any of your friends that just might be interested in coming to see us. With your support we can keep making this bigger and bigger, and all our plans - of which there are many - can become real.