The ITC recommends playing the new 9th ed Grand Tournament Mission Pack for competitive 40k events. The missions below are no longer officially endorsed but left for reference.

This section describes the format Guidelines for the 2020 8th Edition ITC Champion Mission pack. In this section, you will find the rules for pre-game setup, including deployment and scoring for Primary and Secondary missions. Unless otherwise stated, all of the six missions listed below follow these steps. Questions should be directed to: contact@frontlinegaming.org.

Step 1: Before any dice are rolled, players adjust and define terrain on the board, then both players choose Warlord Traits, Psychic Powers, spend pre-deployment command points,  free relic, and any additional Relics they wish to use. These should be written or notated clearly for reference in game.

Step 2: Players reveal the items from step 1 to each other simultaneously.

Step 3: Players then place objectives following scenario guidelines as listed on each mission. Instructions for placing objectives are as follows:

A: All objectives are considered to be on the ground floor and may not be placed inside of enclosed buildings. Move terrain if necessary to accommodate this requirement.

B: Distances are measured to and from models to the closest point of the objective marker when determining which models are in range to control an objective.

Step 4: Each player chooses 3 of the Secondary Mission Objectives listed below. One of them must be from the Seek and Destroy category and one must be from the Maneuvers category. The third mission can be from either category or be Old School.  A player may only choose each mission once. They then reveal them to their opponent simultaneously.

Each game lasts 6 Battle Rounds. At the game’s conclusion, the player with the higher total score is the winner. If one player chooses to concede before the game has come to a natural conclusion or is “Tabled” (meaning all of their units have been destroyed or they are subject to the Sudden Death rule), they retain the score they had up until that point and count all of their units as destroyed for scoring purposes for each of the remaining turns of the game meaning their opponent will earn all of their Kill, Kill More primary points for every turn thereafter. The player that didn’t concede or get tabled may play out the remainder of the game to score any additional objectives to increase their final score. In the case of a concession, the conceding player automatically loses the game regardless of comparative scores.

If a player draws a bye due to an uneven number of players, this should go to the player with the lowest total score and that player receives a win and a score of 30 points.

Each player scores points at the end of their player turn.

Each Player also scores points at the end of each Battle Round.

Example 1: A player picks Head Hunter and Big Game hunter as two Seek and Destroy secondaries. Their Knight destroys a unit that is both a Character and a Vehicle with 10 wounds. They can only score one of the two Seek and Destroy secondaries from that unit of their choice. However, if the same Knight destroyed a Vehicle  with 10 wounds and a separate Character unit in the same shooting phase, the controlling player could score a point for both qualifying secondaries.

Example 2: A player chooses Engineers and Sappers as two Maneuvers secondaries. If both units are on the same objective, the player may choose to either use his Engineers or his Sappers but not both. Similarly,  if they had chosen Recon and King of the Hill and had a unit within 9” of the middle of the table and in a table quarter, the player must choose which of the two Maneuvre secondaries the unit is counting towards.

Headhunter: 1pt for each enemy Character that is destroyed.

Born for Greatness: Pick one of your single model Character units. This unit gains 1pt for accomplishing each of the following objectives up to a total of 4pts. Each objective can only be achieved once per game.

Marked for Death: Choose 4 of your opponent’s units each of which is worth a points value including wargear of 120 or more points. Earn 1 pt for each of these units destroyed.

Gang Busters:  For every 6 wounds inflicted on a non Troop battlefield role multi-model unit composed entirely of models with 3 or more wounds that does not have the Vehicle, Swarms or Monster keywords, score 1 point.

The Butcher’s Bill: Destroy 2+ enemy units during a player turn to earn 1 Point.

The Reaper: For every 20 wounds of Infantry, Swarms, Bikers or Drone models destroyed, earn 1 point.

Recon: Have a unit at least partially in each table quarter at the end of your player turn. A unit may only count as being in one table quarter at a time for the purposes of this rule. 1pt per turn. Starting turn 2, if you have two units in every table quarter, you earn 2pts per turn.

Ground Control: Earn 1 point for each objective held at the end of the last Battle Round played. If you hold all of the objectives on the table at game’s end, you score all 4pts.

Engineers: Select two non-character/non-fortification units from your army to be Engineers. Starting from Battle Round 2, if one or more of these units starts and ends your turn within 3” of the same objective marker you control, and it did not make any attacks or manifest any psychic powers during your turn, earn 1 point at the end of that turn. If you have two Engineer units performing this role on two separate objectives and one or more of the objectives is outside of your deployment zone, earn 2pts. These units may not score this objective if they join other units during the course of play or split into multiple units. Units chosen to be Engineers may never benefit from a rule that keeps them from being the target of attacks, Cloud of Flies, for example. They can benefit from terrain blocking Line of Sight to them.

Sappers: Select two non-character/non-fortification/non-Flyer battlefield role units from your army to be Sappers. So long as a Sapper unit ends your turn within 3” of an Objective outside of the controlling player’s deployment zone and made no attacks or attempted to manifest any psychic powers that turn, the Sapper unit may render the objective Unscorable for any primary or secondary objectives for the Sapper unit’s opponent so long as it remains in this state. Note, a Sapper may render an objective unscorable even if they do not control the objective. Once rendered Unscorable, an objective remains in this state until the Sapper moves more than 3” away from it, is destroyed, makes any attacks or manifests any psychic powers. If at the end of your turn your Sappers have rendered any objectives Unscorable, earn 1pt. Starting turn 2 and on, you can earn up to a maximum of 2pts per turn for Sapping two or more objectives. Units chosen to be Sappers may never benefit from a rule that keeps them from being the target of attacks, Cloud of Flies, for example. They can benefit from terrain blocking Line of Sight to them. If a Sapper unit ever splits into multiple units during the course of the game using an ability such as the Combat Squads rule or is combined into another unit such as with Consolidate Squads stratagem they are no longer Sapper units and lose all of the above abilities for the rest of the game.

The Postman: Select a single model from your army that does not have the Vehicle, Monster or Titanic (with the exception of Imperial Knights and Chaos Knights which may be made The Postman) keywords to be The Postman (this model can be in a unit). This model may choose to gather intel on an Objective within 3” that you control at the end of your turn. You may only gather intel from each objective once per game. Earn 1pt per objective you gather intel from. If at the end of the game you have gathered intel from every objective on the table, you automatically score all 4pts.

Seize Ground Bonus Point: If a player holds or contests 4 or more objectives at the end of their player turn, gain 1 point. 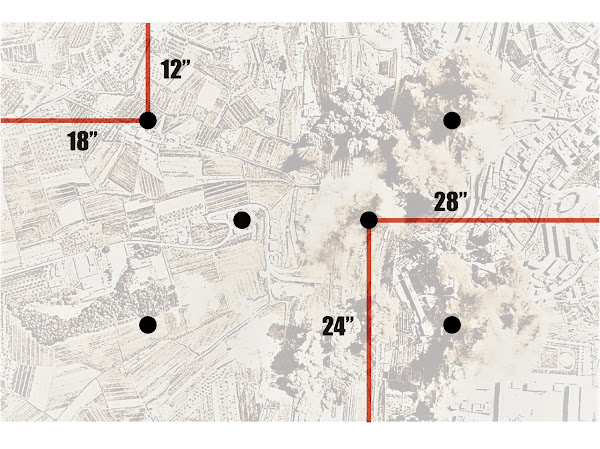 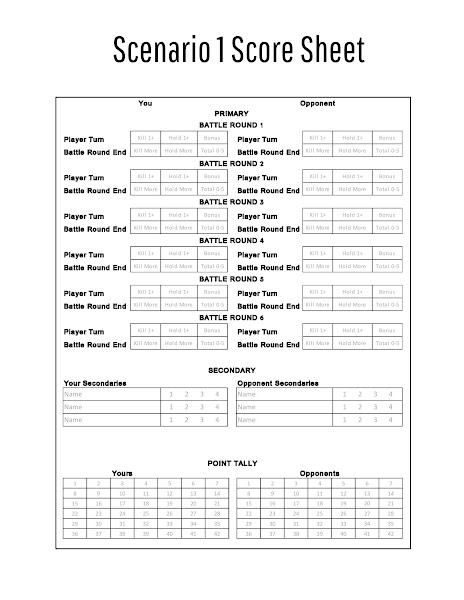 Scenario 2: Cut to the Heart

3 objectives: Starting with the attacker, each player places 1 objective in their opponent’s deployment zone the center of which must be exactly 9” from at least one table edge. 1 objective is placed in the middle of the table. Cut to the Heart Bonus Point: If a player controls the center objective and the objective they placed at the end of their player turn, they gain 1 point. 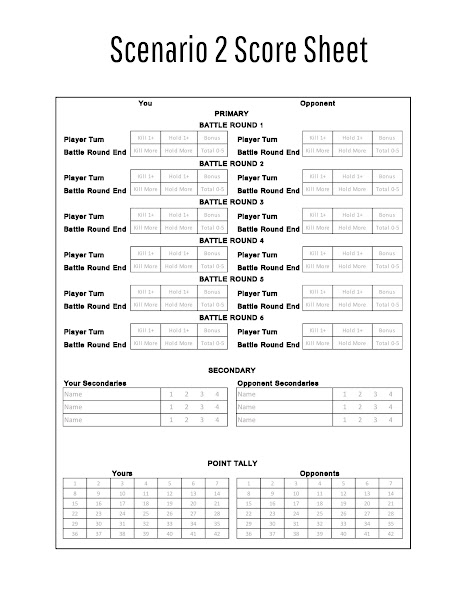 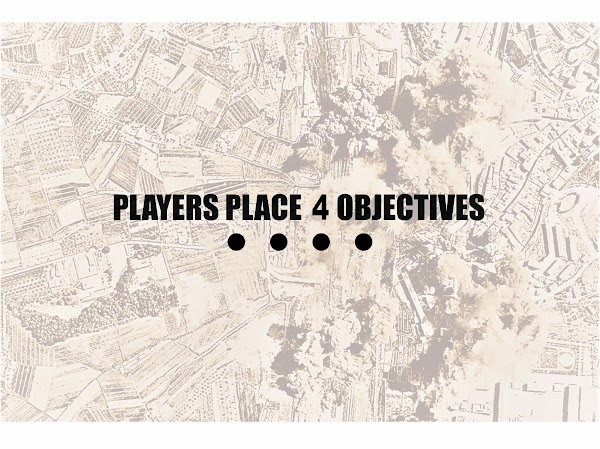 Nexus Control Bonus Point: If a player holds both objectives outside of either player’s deployment zone at the end of their turn, earn 1pt. 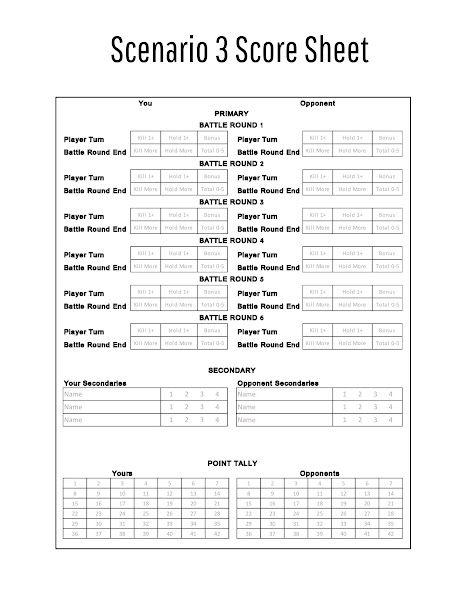 Scenario 4: What’s Yours Is Mine 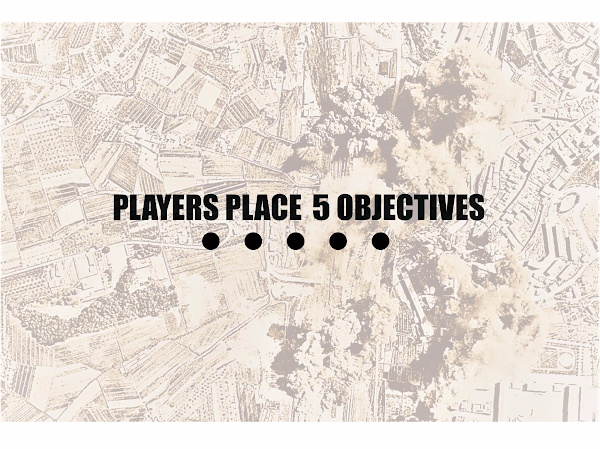 What’s Yours Is Mine Bonus Point: If a player controls both of the objectives they placed on the table at the end of their turn, they earn 1 point. 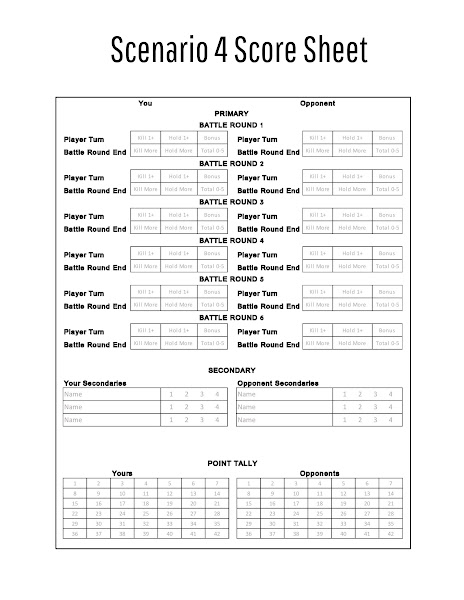 5 objectives placed as shown (one in the middle of the table): 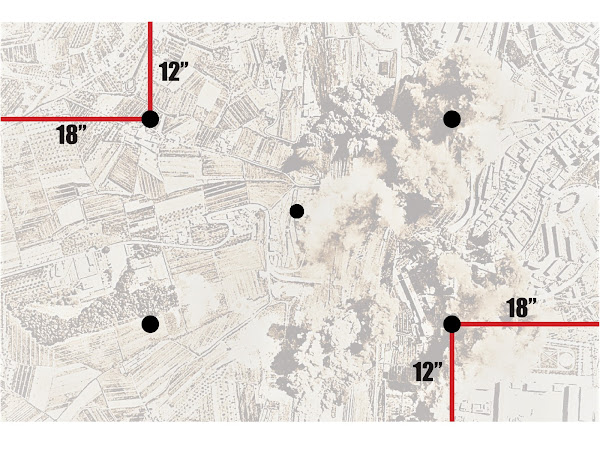 Precious Cargo Bonus Point: Before the game begins, starting with the Defender, each player chooses a separate objective--their Priority Objective--to defend. This cannot be the center objective. After deployment zones have been determined but before deployment, in the order established above, each player may move their Priority Objective in any direction up to 6” from its original position so long as it is more than 6” from a table edge and 12” from another objective.

If a player holds their opponent’s Priority Objective at the end of their player turn or holds 3 or more Objectives, score 1 bonus point. 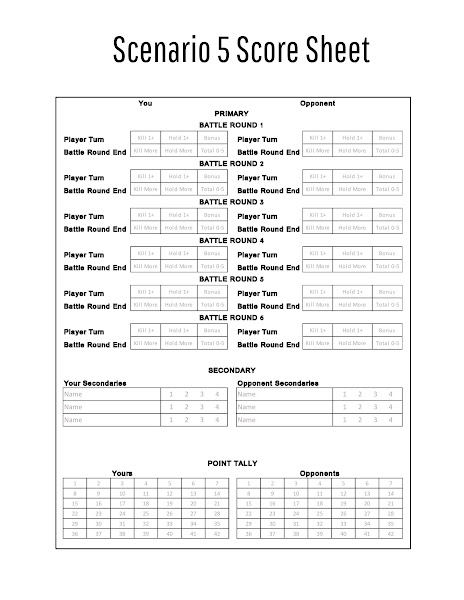 Crucible of Champions Bonus Point: If a player has three models with the character keyword in scoring range of three different objectives at the end of their player turn, they score 1 point. 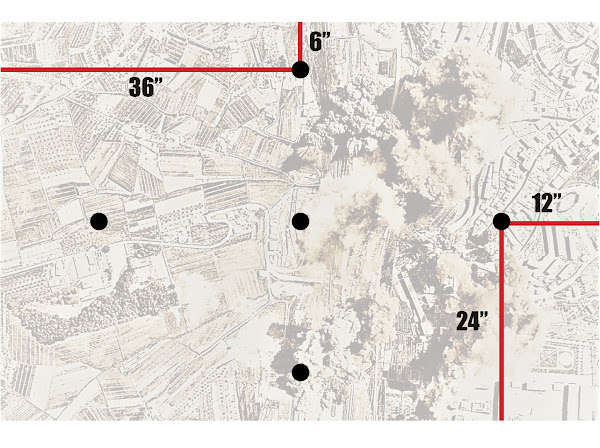 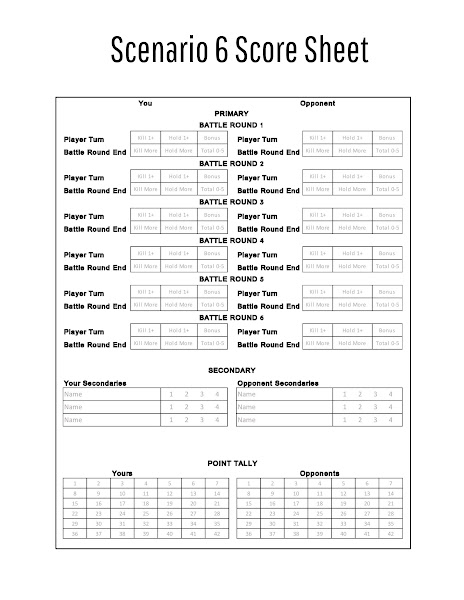