Google I/O is where Google announce their new products and vision.  This year was mostly about the next version of Android - “L” - which for the first time is available as a preview in advance of being released so that developers are able to ensure their apps work on the new version when it is released.

For those that don’t know, Android versions follow an alphabetical sequence named after sweets, the last of which was KitKat, so the next version is speculated to be Lollipop, but for now it’s just “L”.

As well as “L”, the other main focus of I/O was the announcement of new platforms - “Android Everywhere” - Wear (watches), Auto (in-car systems) and TV.

Another interesting announcement is that Google has acquired Appurify - a cloud testing platform for Android and iOS for less than $100/month.

“L” has a new design called “Material Design” which is a kind of 3D design using paper as a metaphor.  It emphasizes dynamic animations and creating depth through the use of virtual lighting and shadows - motion was mentioned in every design session.

A few other new features of Android L are:

Google’s vision of Android Wear is that the watch is a small extension to the phone that is less obtrusive than getting your phone out of your pocket to do things like read notifications.  It is driven by Google Now which shows you the most relevant information at the time you need it.  Input to Wear is with voice.  The watch needs to be connected to the phone, and the phone needs to be connected to the internet.

I went to a nice session about Chrome DevTools.  Two features that were presented are:

I went to an interesting session that was making the point that all communication should be secure by default because the combination of all meta data reveals a lot about you (your users).  They explained how to configure your server and how to migrate, without effecting your Google search ranking.  They also pointed out that SSL certificates are cheap or free, and very little extra CPU power is needed.

Google Maps grew over time and became very cluttered with features.  It was not possible to make small changes to improve it so they decided to make a big redesign.

They had three key lessons:

They had a long preview process as they tried to understand users’ perceptions of it.  They removed as many features as possible and 90% of them were not missed, but users asked for Pegman back because they couldn’t figure out how to navigate the map and Street View without him.

Users also commented that it was slow, although in fact it was faster.  They increased the perception of speed, for example by loading progressively so that there’s quickly something to see.  Another trick was to animate mouse clicks so that in the time between deciding if there’s a single-click or a double-click there’s already a begin of the next action.

If you want to find out more, you can watch videos of many sessions at http://g.co/io14videos

As well the main sessions, there were also lots of smaller sessions, but they were very difficult to get to because they overlapped with the main sessions, and you couldn’t hear anything unless you were standing at the front.  Here is a view of several of these sessions in progress. 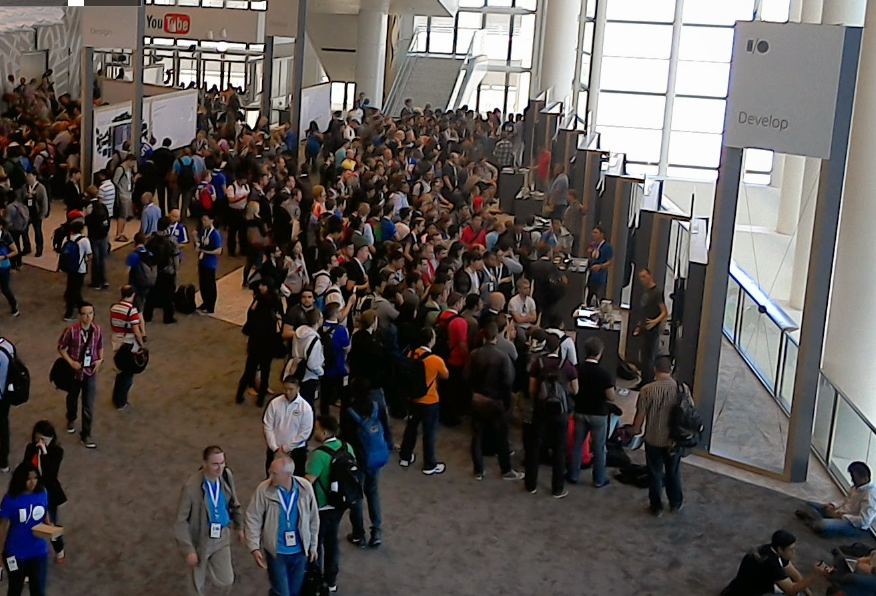