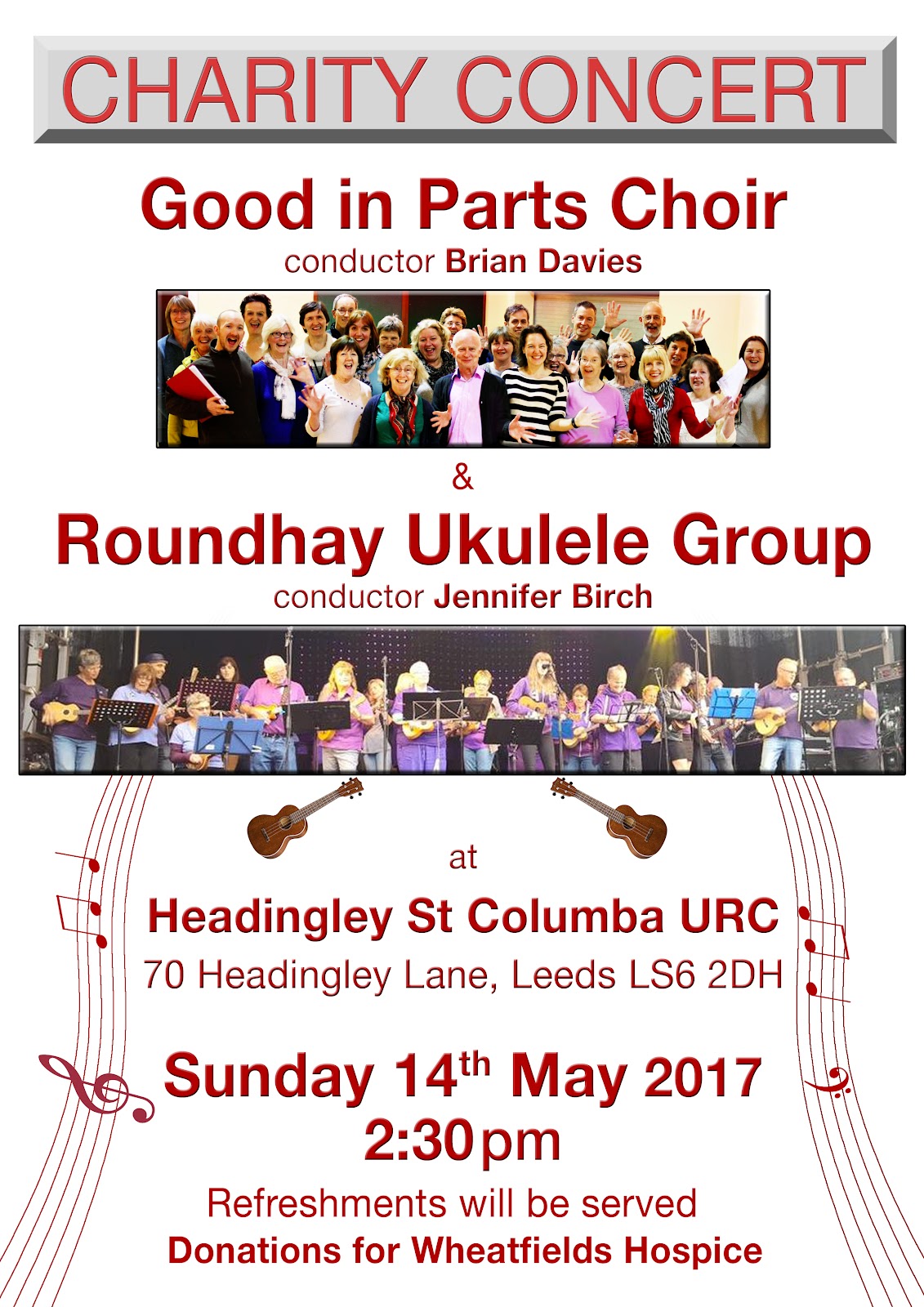 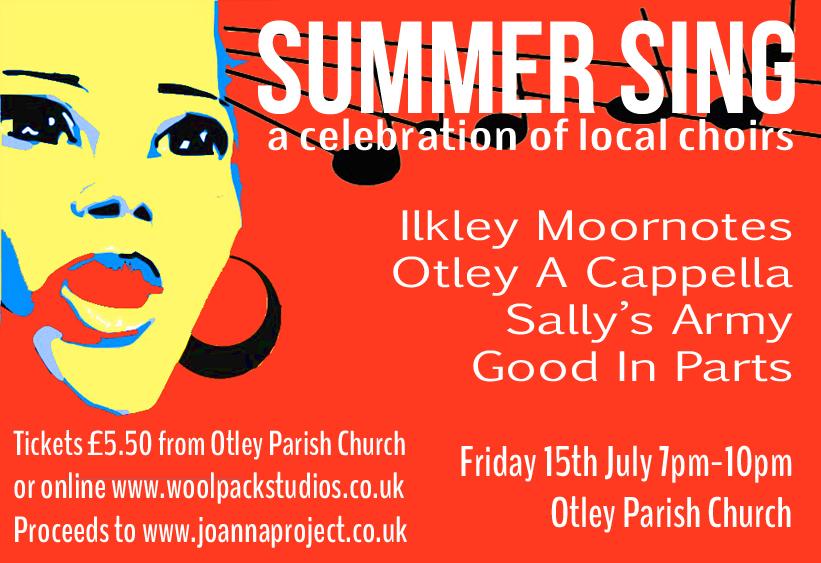 Saturday 11h June 2016, singing with a number of local choirs at the Headingley Music Festival 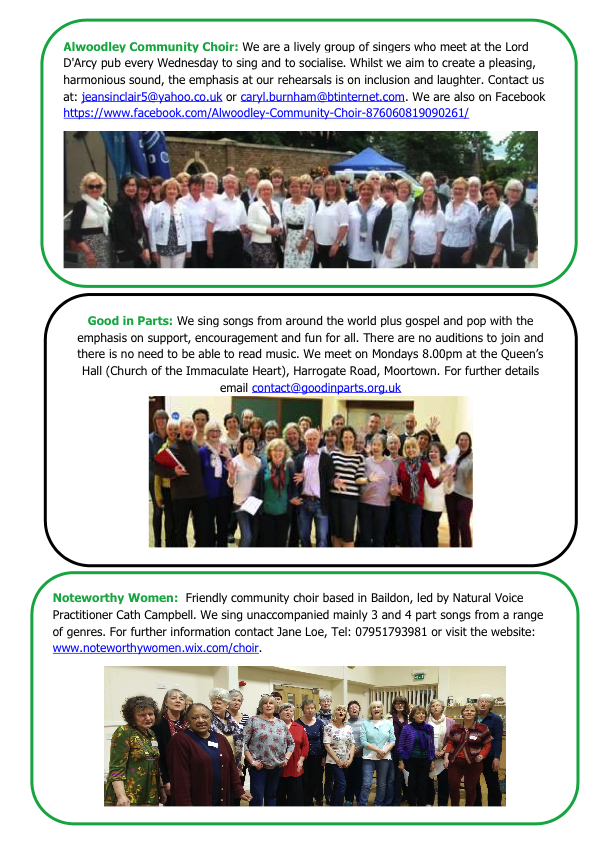 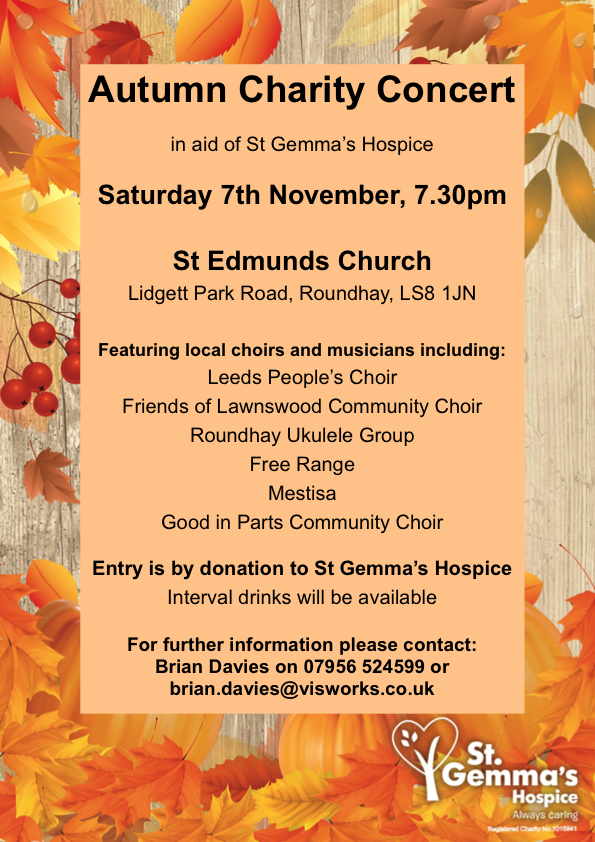 Another chance to sing in the wonderful Live on East Leeds FM at Old Seacroft Chapel on York Road (LS14 6JB) details will appear on http://www.elfm.co.uk/

We were privileged to sing as a sort of ‘warm up’ to the main performance by the Blameless Hussies (aka Jenny Goodman and Sarah Harman).

Lovely sound made - have a listen here: http://www.elfm.co.uk/listen-again/blameless-hussiesgood-in-parts/ and what a great venue.

Thanks to East Leeds FM and the Hussies for letting us participate.

What fantastic fun for a packed hall!  Some pretty dodgy dance moves seen all round, but a really fun evening with a the added bonus of raising several hundred pounds for St Gemma’s Hospice.

Thanks to The Roosters Ceilidih Band http://www.teddodsworth.talktalk.net/roosters/roosters.htm, to Catherine Mellor and the social team for organising such a great event.

The Christmas party was a huge success, when we invited several other local choirs including Free Range, Lawnswood and the Kitchen choir to perform on our last meet of the year. Friends & family were invited and we all enjoyed each others songs, sang some carols and ate too much food and drank some mulled wine.

As a huge bonus, we also raised £200 for St Gemma’s Hospice in Moortown.

The choir Christmas dinner was held at ‘Seven’ in Chapel Allerton on Thursday December 5th at 7.30pm.

It was wonderful for Good In Parts choir to join up with many choirs from around the region to sing together at this years Saltaire Festival!

A splendid time was had by all!

We hosted a another wonderful concert at St Edmund’s Church in Roundhay, Leeds during which eight choirs sang for the benefit of several hundred members of the audience. What’s more, we raised nearly £1,500 for the local St Gemma’s Hospice in Moortown. 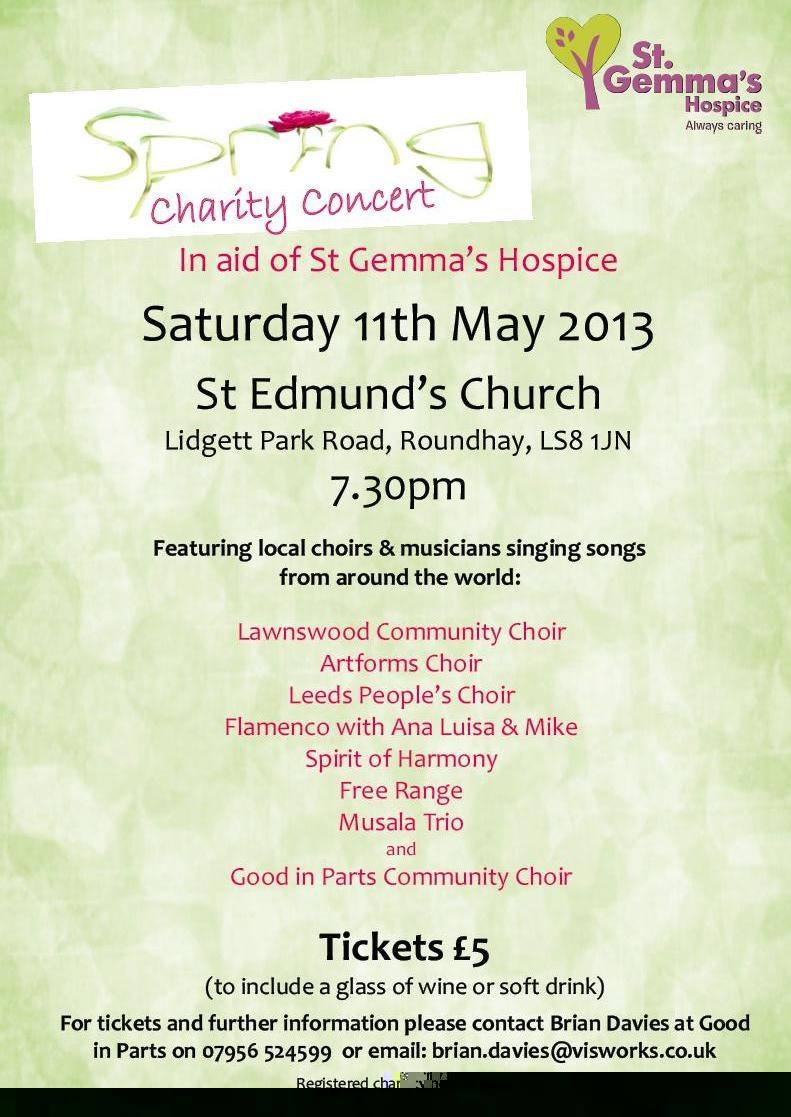 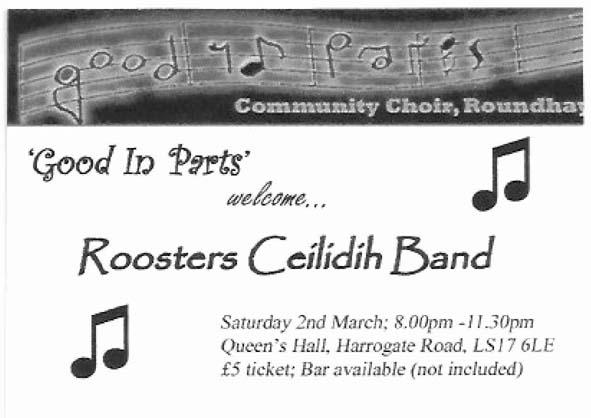 Once again for the final meeting of the year we held a very enjoyable social event at Queen’s Hall, where we were able to perform some of our favourite songs in front of friends and family.

After a break with wine and delicious home make cakes and snacks, our vocal chords were lubricated and our spirits raised. We then has a delightful general Christmas Carol singalong with everyone joining in.

Merry Christmas and a Happy New Year to all! 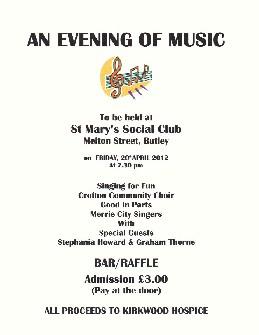 It was wonderful to hear so many choirs singing both separately and together as we ended an evening of singing and a couple of funny sketches with all present singing a heart-warming rendition ‘Keep You In Peace’, by Sarah Morgan.

It was great to be part of such a fun evening, which also raised nearly £600 for Kirkwood Hospice in Huddersfield. We sang five songs either side of the interval,  ‘Nobody's Fault But Mine’, ‘One Love’, ‘Make You Feel My Love’, ‘One Day Like This’ and our newest song ‘Viva la Vida’.

We hosted a wonderful concert at St Edmund’s Church in Roundhay, Leeds in which no fewer than seven choirs participated! It was particularly poignant for Good In Parts members as it was held in memory of one of our founder members, Maureen Brown. A packed church of over 350 people enjoyed a wonderful evening, raising funds for St Gemma’s Hospice in Moortown.

Good In Parts songs performed available to listen or download here - thanks to Jonathan Collins: 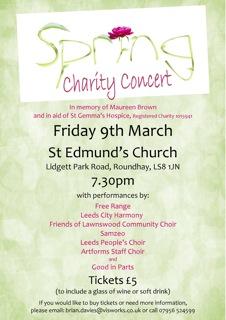 The final meeting of 2011 was a very enjoyable social event at Queen’s Hall where we were able to perform some of our favourite songs in front of friends and family. This was followed by a delightful general Christmas singalong with everyone joining in.  Merry Christmas and a Happy New Year to all!

We participated in both massed choir events and some solo busking round Saltaire. Even the rain couldn’t dampen our spirits as we serenaded commuters on the station platform and even practised on board a canal long boat!

A packed weekend of various events to welcome our Icelandic hosts of 2010, ‘Kvennakor Kopavogs’ Women’s Choir. 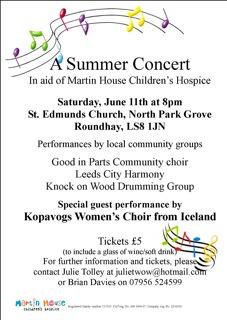 The recordings are now available here

Good in Parts performed as part of a Christmas service in aid of MenCap.

18 members of GIP took a fantastic long-weekend to trip to Iceland, where we were hosted in grand style by a local choir, Kvennakor Kopavogs. We enjoyed a packed programme -

The centrepiece was a joint concert given at the world-renowned Smarrin Stadium (think Shea Stadium on a more human scale), at which the Kvennakor performed beautifully.

We are very grateful to Julie from our own group, and Rosa from Iceland, for jointly organising this superb event. The precedent has been set - now we look forward to welcoming our hosts back to Yorkshire for the home leg, which we hope will be in June 2011.

Brian ran a workshop together with three other choir leaders in the lovely Dales village of Dent on Sun July 19. This was a fundraiser in aid of the Natural Voice Network. Details in this document

We performed at St Mary’s Social Club in Batley as part of a fund-raising event for a charity working in Kyalitcha - an impoverished township in S Africa.

Good in Parts performed in the ‘Peace and Love’ hour as part of this 24 hour music marathon for charity projects in East Leeds. It was a broadcast from the Seacroft Methodist Chapel , a beautiful old building with very nice warm acoustics. Our set (listen or download it HERE) included Peace Like a River, Te Aroha, and O So Seo. 3 of us were also interviewed afterwards. The full 24hrs of podcasts are now uploaded by the radio station, and you should be able to listen to the whole event (or just the 7pm Peace and Love hour) on the ELFM website.

For the second year running, Brian organised a joint performance with 6 other local choirs. This was very well attended and raised several hundred pounds. It was also a great opportunity for our families and friends to hear what we do, and for us to enjoy a very varied and interesting selection of songs from our friends in other choirs. The programme can be seen here.