TEN
No one is who they seem. Not even you.
A surrealistic, post-exploitation, avant-mystery w/an all-female cast
A Sophia Cacciola / Michael J. Epstein Film (Launch Over)

TEN is currently released on DVD / VOD / On Demand via BrinkVision. Ways to watch TEN: http://tenthemovie.com/seeten.html 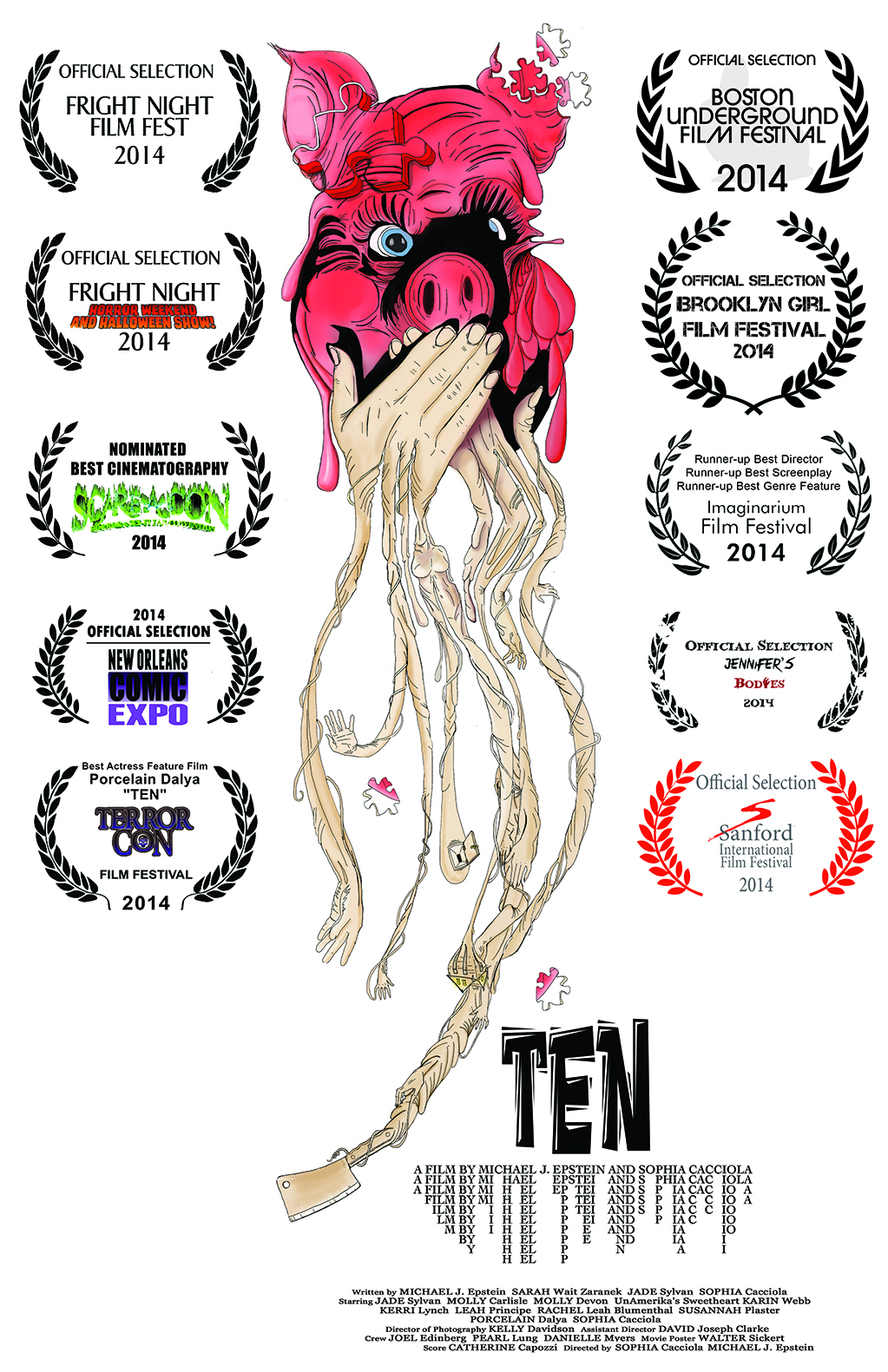 “TEN is up to something a little different, looking to subvert audience expectations...and while TEN contains the scenario’s requisite blood and nudity, it veers off in directions you likely won’t see coming, both in narrative terms and in the way it explores questions of female identity.” - Michael Gingold, Fangoria, Issue #335

“...a Clue-esque, genre-mixing murder-mystery at a haunted mansion...with enough themes and tropes to start a marching band.” - Jonathan Donaldson, DigBoston

“As well as an incisive piece of social commentary, Ten is also a highly entertaining horror film with a distinct aesthetic....The ultimate revelation behind the events is as incredibly simple as it is joyfully ridiculous, and perfectly fits both the slasher plot and the observations on women’s defined societal roles. Ten might be fun and gory, but it also manages to think a little along the way.” - Andrew Marshall, Starburst Magazine

TEN is a surrealistic, post-exploitation exploration of identity starring ten women. The film examines the arbitrary fluidity of identity and the way in which we as observers contextualize and stereotype women based on superficial characteristics including their appearance and demeanor. The film narrative itself is structured to parallel the commentary on characterization with breakneck genre, style, and tone shifts, repeatedly seeking to recontextualize all that you have previously been presented.

Directors’ statement
No one is who they seem. Not even you.  “In order to be a great actor, you need to become what you're pretending to be. It's not something that just vanishes when someone calls, "cut." But we are all always acting. We are writing our parts and deciding who we should become every single day. Is any of it real? If we took you when you were born and dropped you into a different location with a different family, you would be performing as someone else right now. TEN is an exploration of this idea within the context of a film following traditional thriller structure - the characters are performing their characters. There are arbitrary alliances and arbitrary beliefs. It's an unusual, metaphorical movie, with unusual actions, behaviors, and ideas.”

Ten women find themselves in a vacant mansion on Spektor Island in December, 1972. Each believes she's traveled to the house on business, but they all agree that something seems strange. For one thing, the entire house is full of pictures and statues of pigs.

The women all come from drastically different walks of life. None of them would have chosen to spend the night together in such an eerie place, but the last ferry for the mainland has just left, and a terrible storm is rolling in. Trying to make the best of an unpleasant situation, they raid the mansion's wine cellar and throw a party. As the night creeps on, however, it becomes clear that someone--or something--has arranged to get them in the house. It's not long before someone mentions that Spektor Island is supposed to be haunted. Of course, no one in the house believes in ghosts.

At least, not until the first murder.

What do an actress, a religious zealot, a renegade, a coed, a model, a singer, a medium, a real-estate investor, a historian, and a doctor have in common? None of them is who they seem. Yet, the fate of the entire world may rest in their hands.

Companion Novelization of the film: http://blog.michaeljepstein.com/2013/07/novelization-of-film-ten-by-jade-sylvan.html

If you’d like any additional materials about TEN (stills and other promo materials), check out our web site at: http://tenthemovie.com/press.html

An extensive interview with (re)Search My Trash about the approach to the film and its contents: http://www.searchmytrash.com/articles/michaeljepsteinsophiacacciola(5-15).shtml

An interview with All Things Horror examining some of the symbolism, and other aspects of TEN: http://www.allthingshorror.com/2014/04/ten-interview-with-michael-j-epstein.html

How to see TEN: http://tenthemovie.com/seeten.html