Thanks to WKO4 and the work of Andy Coggan, PhD on developing various running metrics, I have been able to begin to explore Running Effectiveness and what might influence it.  I have no definitive formulaic answers, but I do have some insights.

In my observations of male and female runners, from high school to collegiate competitive levels, at speeds from sub-threshold to maximal aerobic, and higher, RE typically tends to correlate somewhat with increasing speed.  (Figure 1) 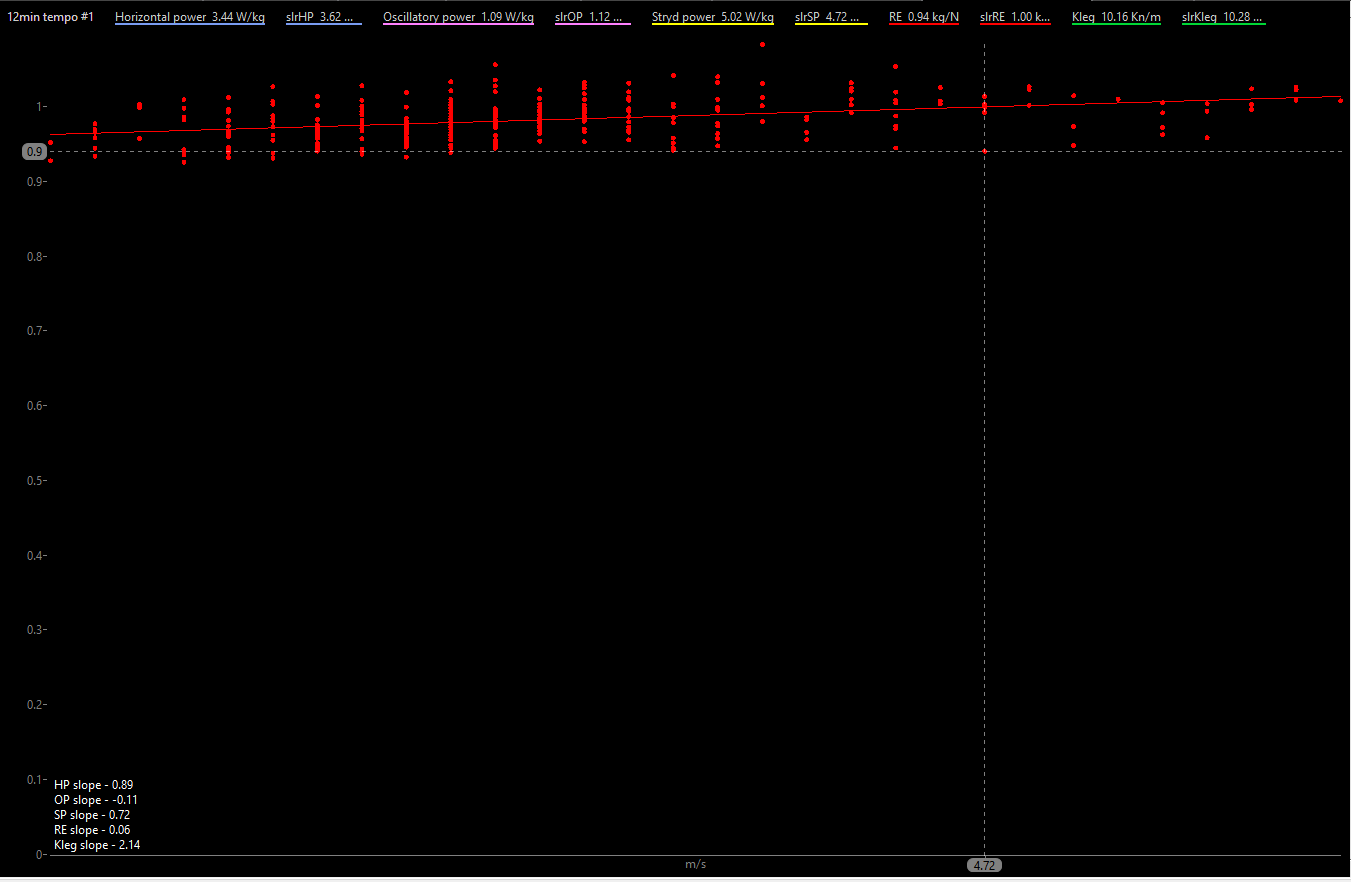 By formula, RE = speed / power, therefore for RE to increase as demonstrated, speed has to increase moreso than power.  In running, not all runners are equally efficient or economical.  Apparently, even a single runner is not equally efficient or economical (at least as measured by RE) within a single run.  If a runner’s RE remained uniform, then speed would respond proportionately to power - power goes up, speed goes up proportionately, and RE remains unchanged (within a band of threshold speed/power +/- 10%, for example).  However, this is often not the case.  Why?  Because running speed is a product of more than just power.

1) One set of metrics that may demonstrate what is happening would be the components of Gross External Power (what is computed by Stryd) and how they correlate with speed. 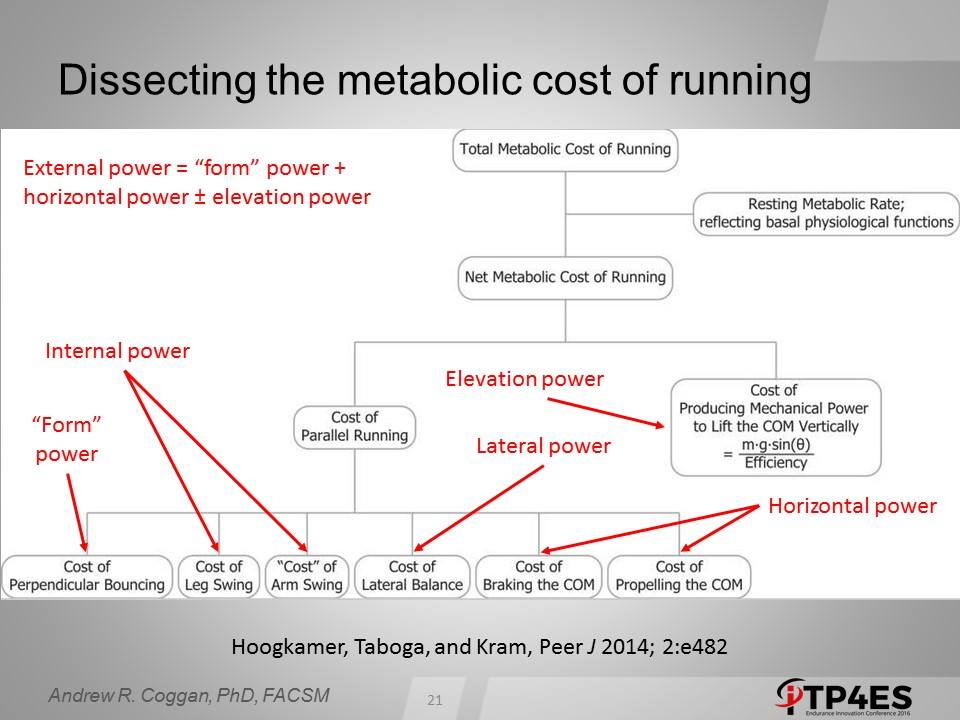 In Figure 3, the same run segment is analyzed, again showing the modest increase in RE versus speed.  As expected, Stryd power correlates with speed.  However, the slope of Horizontal power is greater than of the raw Stryd power.  Oscillatory power (form power) declines subtly versus speed.  Consequently, it appears that relatively greater Horizontal power is generated as speed increases. 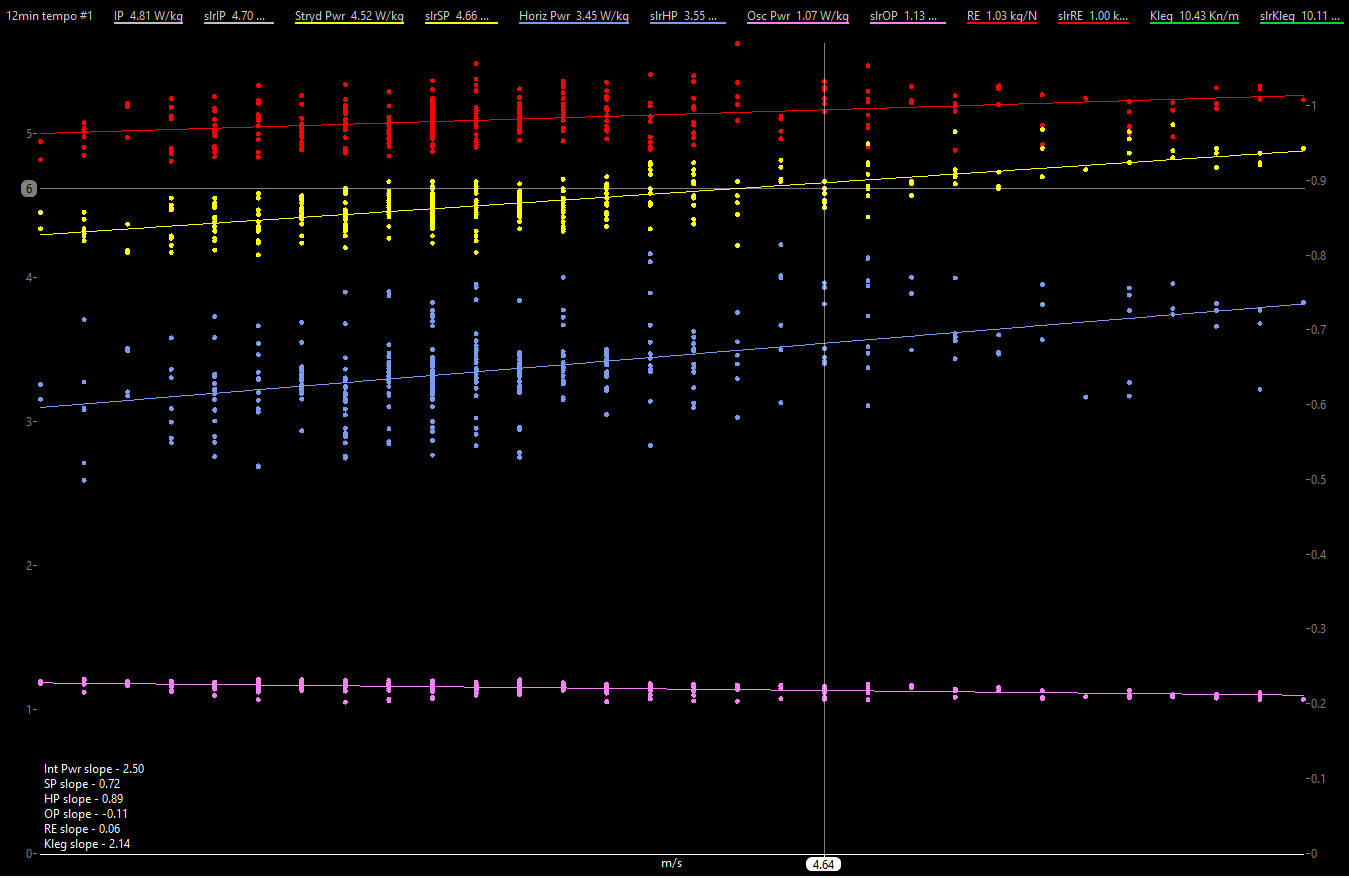 Figure 4 is the same segment again, now with power components versus RE.  Here, you can see that raw Stryd power negatively correlates with RE during this run.   Oscillatory power has virtually no correlation with RE. However, Horizontal power does positively correlate with RE. 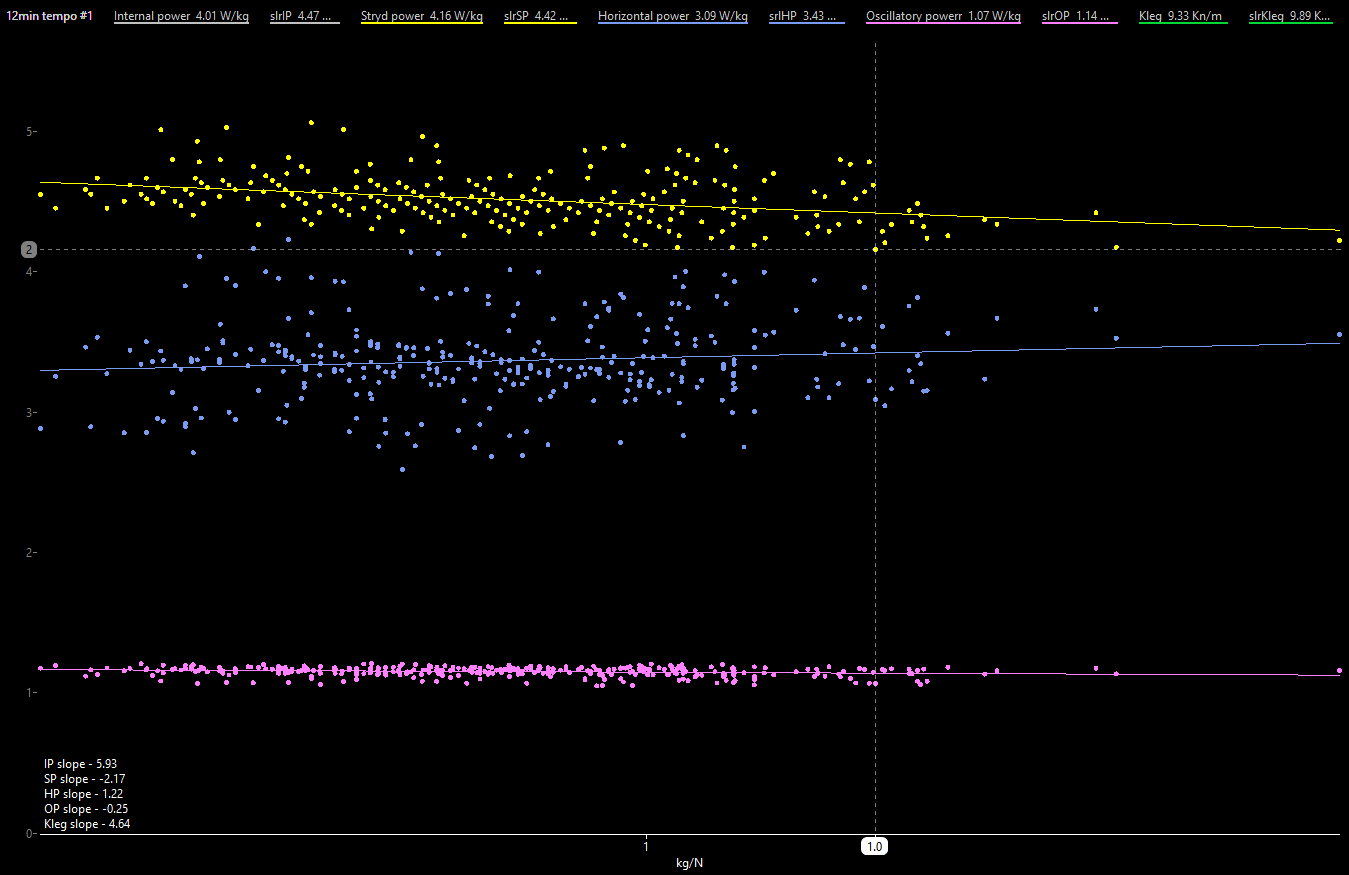 Thus, one factor that may be associated with an increase in RE is a relative increase in Horizontal power.  Could this be reflective of subtle form changes that increasingly direct power more horizontally with increased speed? 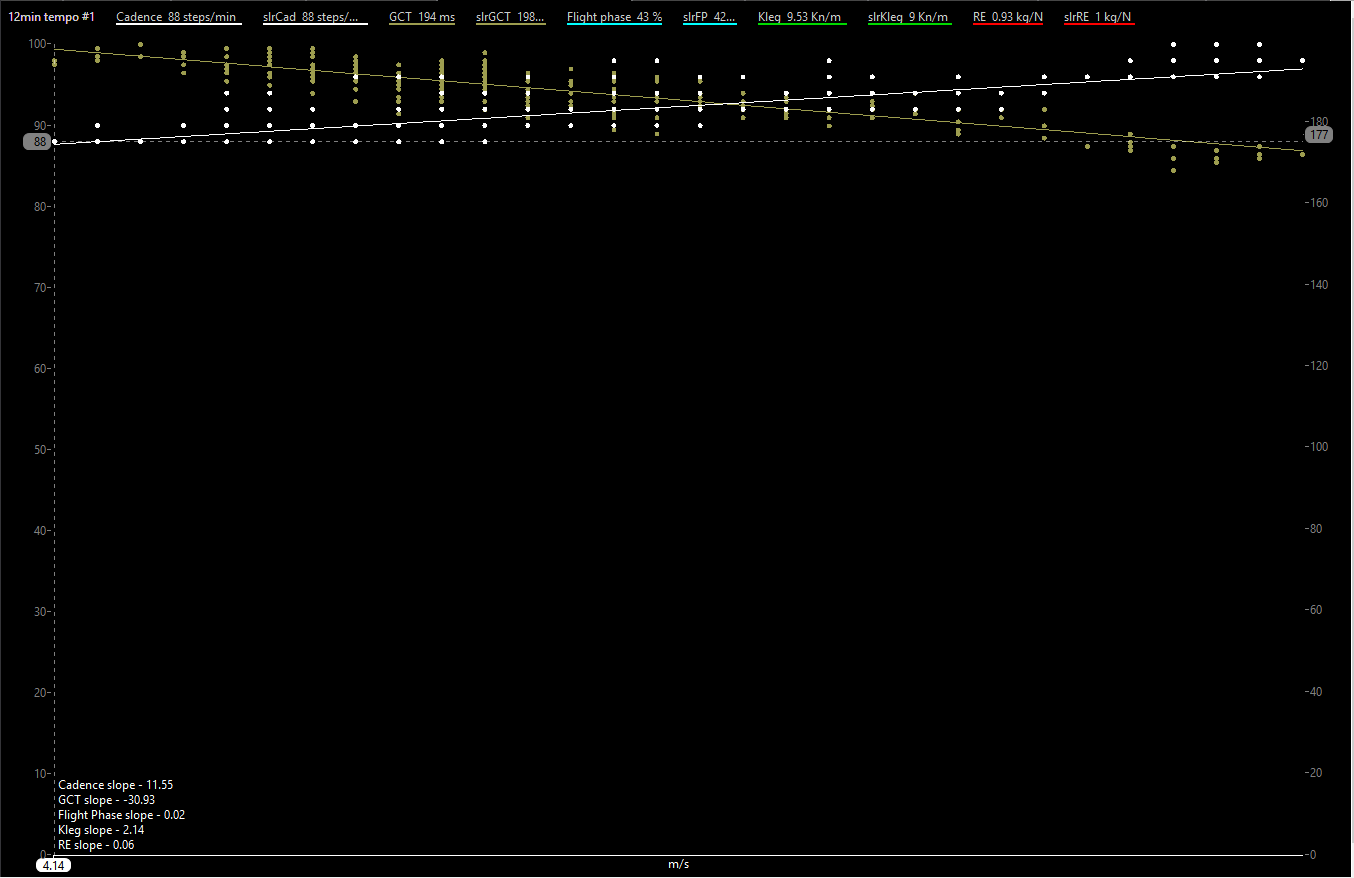 The same relationships hold for Cadence and GCT versus RE. (Figure 6) 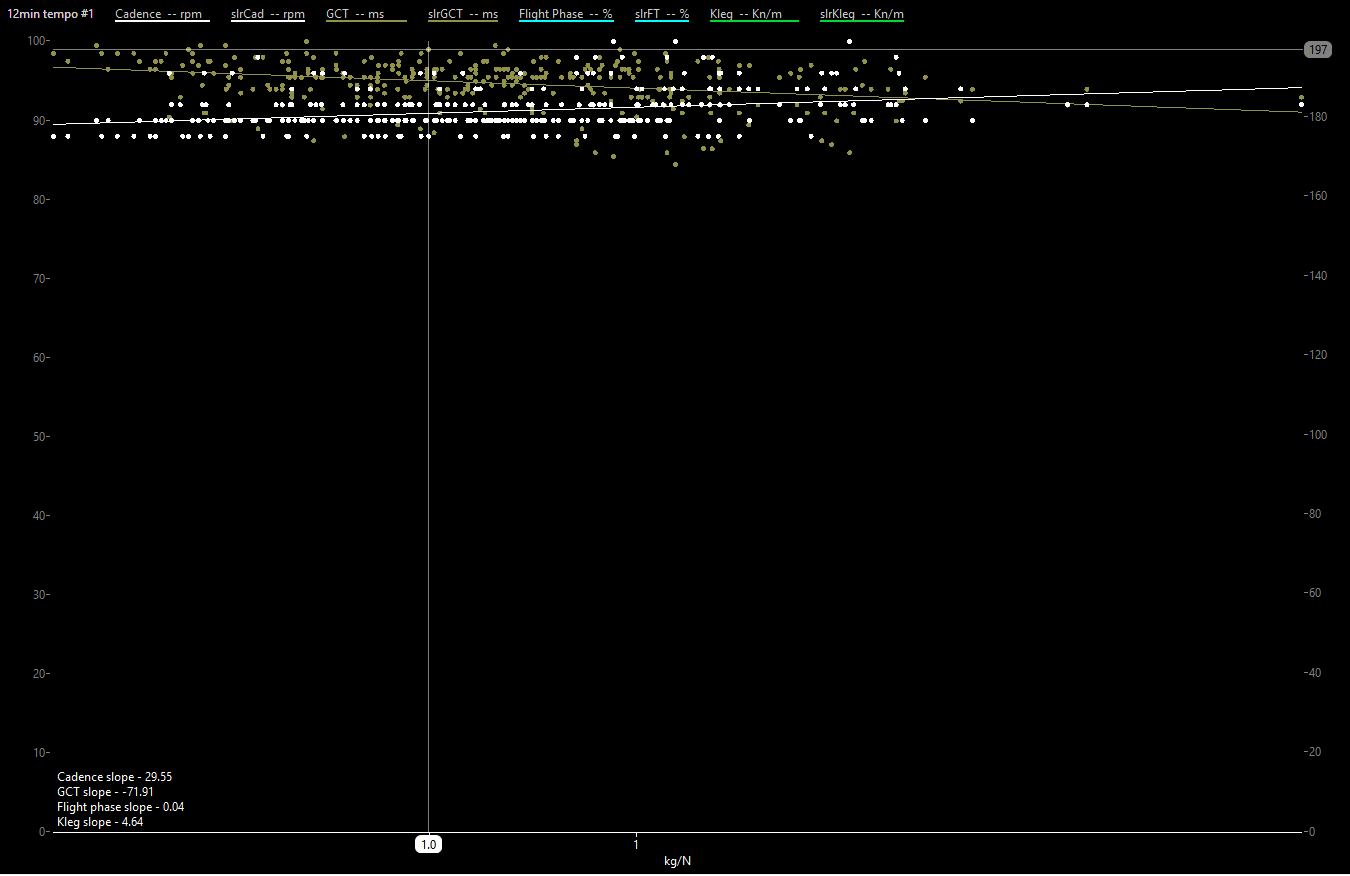 3)  However, perhaps the more intriguing relationship is that of Kleg (leg spring stiffness), because literature suggests that it may be trainable.  I consider Kleg (leg spring stiffness) to be an extra component that may drive speed without metabolic cost.  Again, the same runner and same run segment - now with Kleg, Horizontal power, Oscillatory power (form power), and RE versus speed. 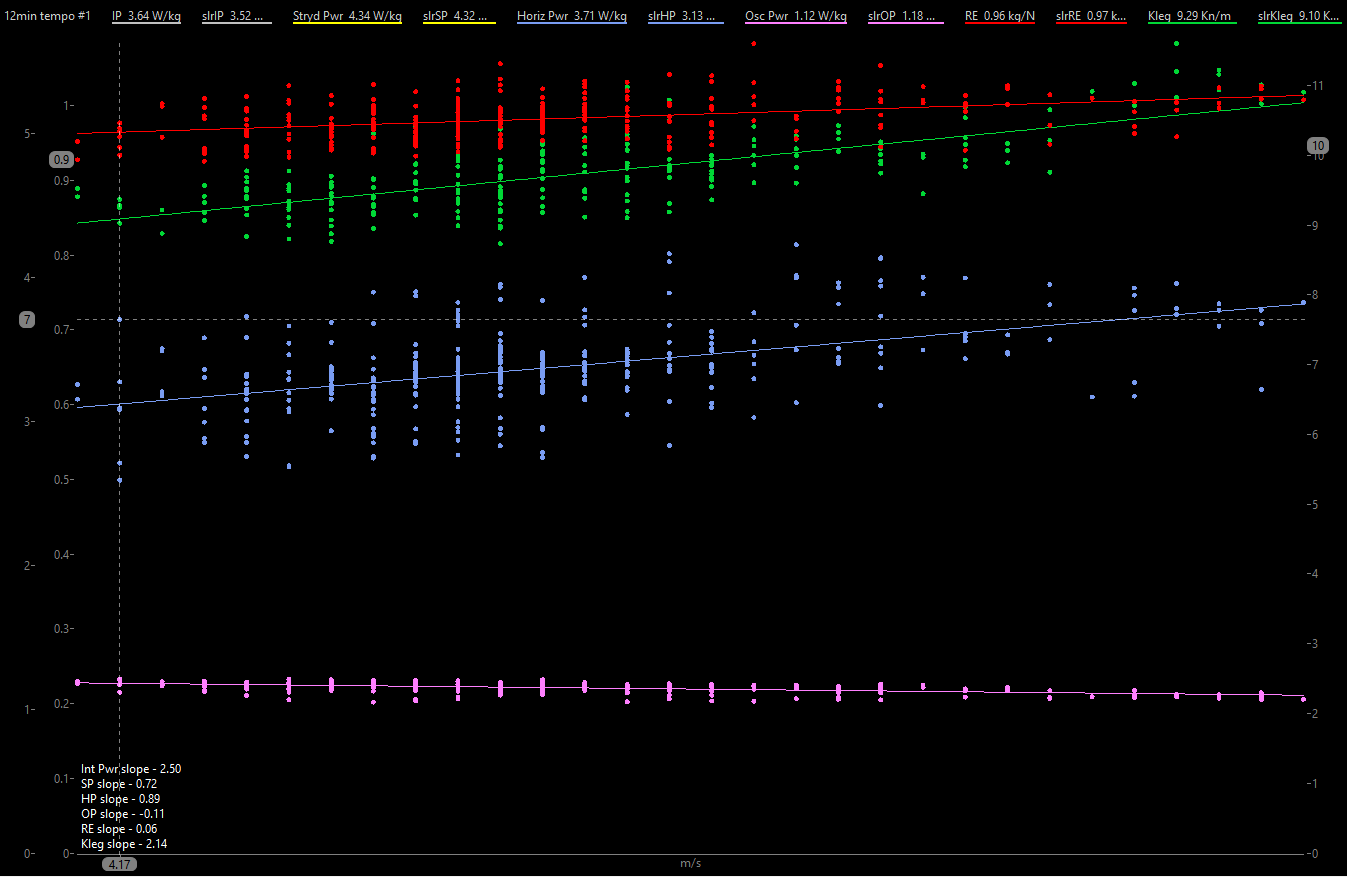 While we see the shuffling of the metabolic components of Horizontal power and Oscillatory power as discussed earlier, we also see the positive correlation of Kleg with speed - with a higher slope than Horizontal power. 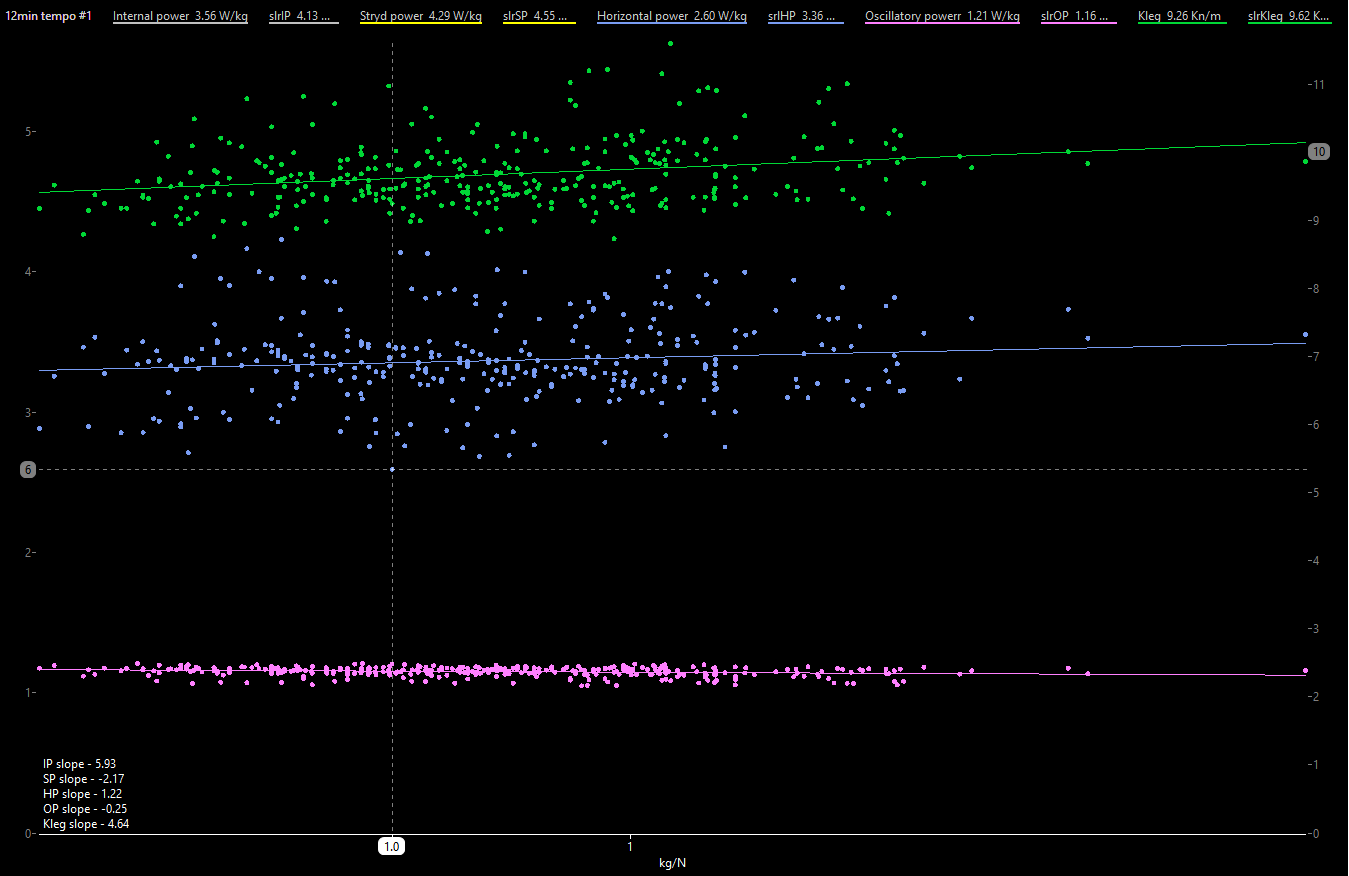 Kleg appears to have a stronger correlation with RE than power (in general), and Horizontal power (specifically).

These charts and observations, while reflective of this one run, this one runner are actually representative of multiple athletes, multiple runs.  I see these patterns in male and female runners, from high school to collegiate competitive levels, at speeds from sub-threshold to maximal aerobic, and higher.

In running, speed is a product of both, external power (as computed by Stryd), and other “efficiency / economy” factors that may increase speed at a faster rate relative to power.

Kleg, GCT, Cadence, and a shift to a greater component of Horizontal power have all been identified as having a correlation with speed, and with RE.  The issue with the charts that I have presented is that they are not able to ascertain causation, but instead only correlation.

A follow-up question would be: of these, which are trainable or actionable?  And further: which can be enhanced without adding a corresponding effect-neutralizing metabolic cost?

I suspect that globally modifying cadence may come at a corresponding effect-neutralizing metabolic cost.

I suspect that GCT, and perhaps even form-related factors in manifestation of Horizontal power, are trainable.

As I said initially, I have no formulaic answers, but I am gaining insight regarding the runners that I work with, and how to enhance their training beyond building power parameters.