Example: Adding Deformation to a Plate 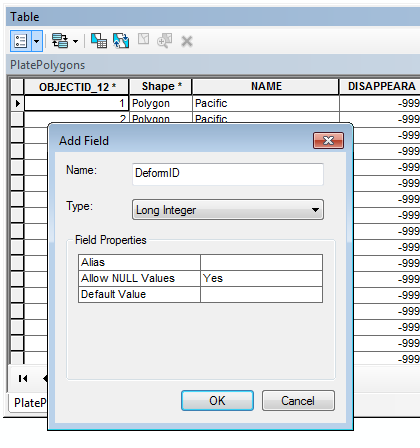 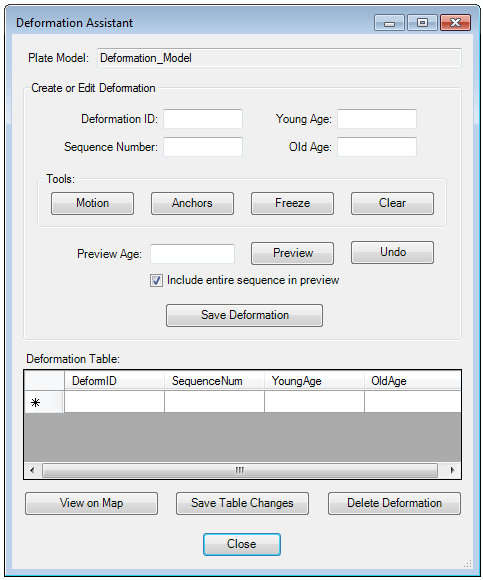 Deformation ID: The plate’s DeformID that was assigned in Step 3 in the Getting Started section above.

Note that the lowest number doesn’t have to be 0 and older events don’t have to be numbered in increments of 1 as long as the sequence goes from youngest to oldest (e.g.., the sequence numbers could be 1, 3, 8, 10 for a particular plate, where 1 is the youngest and 10 is the oldest).   Even if there is only one deformation event defined for the plate, it must still be assigned a sequence number (i.e., 0).

*In this document, a “deformation event” refers to the deformation that is defined by a single row saved in the Deformation Table

Old Age: The age at which deformation starts for the current sequence number.

Young Age: The age at which deformation ends for the current sequence number.

Note: If the plate has multiple deformation events, it is ok for the age ranges for different sequence numbers to overlap.

Example: Adding Deformation to a Plate

In this example we’ll be adding deformation to a plate on the east coast of S. America that has been assigned the DeformID 111 (plate shown in yellow in the images below).  The deformation will occur between 110 Ma and 135 Ma, when S. America and Africa are rifting apart. 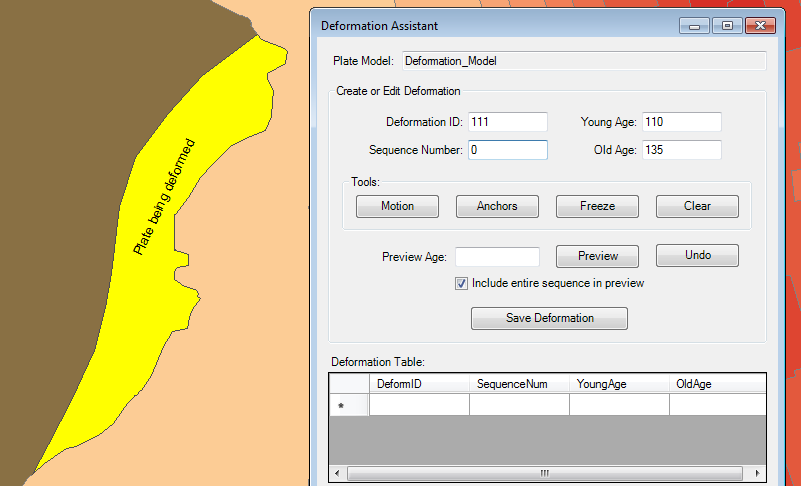 Using the Motion, Anchors and Freeze buttons (as shown in the animation below) we can add motion vectors, anchors and freeze polygons to the plate to define how the plate will deform over the specified age range:

Hint:  When the Deformation Assistant is open, an ArcMap edit session will be started.  As a result, you can use the ArcMap Snapping Toolbar to turn on/off snapping.  Snapping can be useful when adding deformation graphics to the plate.

After you’ve added the graphics to define the deformation, you can preview the deformation by entering a Preview Age (in Ma) and clicking the Preview button to see how the polygon will look at the specified age, as illustrated in the animation below.  The Undo button will return the polygon to its undeformed shape.

Once you are satisfied with how the plate deforms, click the Save Deformation button to save your work.  When you do this a row will appear in the Deformation Table at the bottom of the Deformation Assistant (see animation below).  If you later want to view/edit this deformation event, select the desired row in the table and then click the View on Map button.  This will add your saved graphics to the map and populate the fields in the Create or Edit Deformation area with the saved values.  You can now make any desired changes to the graphics or the Create or Edit Deformation fields and then click the Save Deformation button to save your changes.  You will be warned that this deformation already exists, so you will need to click OK to finish the save.

If you only want to change the Deformation ID, Sequence Number, Young Age and/or Old Age values (i.e., no changes to the deformation graphics), you can make these changes directly in the Deformation Table and then click the Save Table Changes button to save your changes.

To remove an entire deformation event, select the desired row in the Deformation Table and click the Delete Deformation button.  You will then need to click Yes in the warning dialog that appears to complete the deletion.  You can select multiple rows to be deleted by holding down the Shift key while you select the rows.

If you’ve defined multiple deformation events for a plate, then you have the option when using the Preview button to preview only the deformation resulting from the graphics that are currently shown on the map or to preview the cumulative deformation caused by the entire deformation sequence.

To preview the entire sequence, check the Include entire sequence in preview option under the Preview Age text box.  This is the default setting and it is useful when you are previewing deformation in the present day and you want to see be able to see a plate’s deformed shape at any age using a single click.  It doesn’t matter which deformation event graphics are currently shown on the map for a particular plate; when this option is selected, the preview function will included any other deformation events in the sequence that have been previously saved for the same plate.  Also, if you are currently defining a deformation event that hasn’t been saved yet (i.e., you’ve drawn the graphics and filled in the Create or Edit Deformation fields), this unsaved event will be included as part of the deformation preview.

Note that if a plate has only one deformation event defined (saved or in progress), the preview results will be the same regardless if the Include entire sequence in preview option is checked or unchecked.