Like Cities and Towns who have become known as 'Football Towns' due to their  large support and success, I've always considered the same applies to 'Cycling Towns' for the same reasons.  Long Eaton has always been such a town.

By the 1980's only two clubs remained in Long Eaton, the Long Eaton CC and the Long Eaton Paragon CC, who like some town football teams, enjoyed a local rivalry.  The history of both Clubs show that over the years they have produced many outstanding riders, some up to International standard, and organised many successful racing events, including National Championships and provided club touring at home and abroad.  Each in their turn became dominant both locally and Nationally in time trials and road racing, their successful riders too numerous to mention here.  However, one Long Eaton CC member Pat (Patrick) Abbott deserves a mention as he was their top rider in the 1950's and is still riding time trials and road races today in VC Long Eaton colours. In the 1960's the Paragon could boast the membership of one time living legend Ray Booty, whose heyday belongs in the 1950's when he won three British Best All-rounder

However, in the mid-decade of this millennium (2005) it became clear to me that here we had two Town cycling clubs 'bumping along', ageing members and falling membership and the age-old problem of no volunteers to fill the jobs – the sparkle had gone out of two once great cycling clubs.

Bearing in mind that an unsuccessful attempt had been made in 1966 to amalgamate the two town clubs but had failed, in the Autumn of 2005 I started to sound-out various members of both Clubs on my Wednesday and Sunday runs on their opinions of one Club for Long Eaton.  I remember speaking to Long Eaton CC's George Mettam, Ross Minton and Lew Travers, and various members in my own Club, the Paragon.  There was no out-right dismissal of the idea by members so I asked Geoff Kitson, the Long Eaton CC Secretary and the Paragon's committee to put the idea to their members at their forthcoming AGM's.  The response was good from both sides and it was agreed to have a small representation from both Clubs at a meeting held in the WI Hall, Sawley in late 2005 to see if the idea was worth pursuing and to decide if amalgamation was in the mutual interests of both Clubs with regard to the future of cycling in the Long Eaton area.

No minutes were made of  this first meeting but of those present I remember Brenda and Bern Rhodes, Bruce Townsend and myself on one side and Mark Daine, Kevin Gough, Baz Buttler and George Mettam on the other.  The conclusion for both Clubs was that it was worth meeting again with more members present.  Missing from the meeting was Nigel Brown, Long Eaton CC Chairman who was in the USA but took the Chair for the second meeting. He was to be a great asset in the following months, guiding the meetings and getting through the business required, and taking and issuing the minutes.  A local schoolmaster,  Nigel, after the new Club was well established, eventually started to travel the World with his family, continuing his teaching, and of course was unable to continue with his Club work.   For the past few years he has attended the Boxing Day TT at Shardlow where he serves the welcoming tea after the race.

Following amicable exchanges between the representatives of the Clubs, the moment of truth arrived in February 2006, when a joint meeting of the whole membership of both Clubs took place at the WI Hall, Sawley to decide the outcome.  Peter Towey of Matlock CC was asked to attend and act as referee for the proceedings.

The Hall was packed that evening by CC and Paragon Club members and after further discussions the crucial vote was taken.  There was an overwhelming 'Yes' vote for the amalgamation.  This was followed by voting for the name of the new Club – amongst them Long Eaton Wheelers, Three Counties CC and the most modern Velo Club Long Eaton.  The latter, as we now know, was the most popular.  Prior to the meeting, Mike Parker of Long Eaton CC was asked to design the Club clothing using both Club's colours, red, white, black and blue and produce a logo.  These were on display at the meeting and what you see today was passed. The first clothing purchase was with the Italian company, Giordana.

It was agreed to continue monthly meetings between a core of members, mainly at the Railway Inn, Sawley and occasionally at the Wesleyan Chapel on Tamworth Road, Long Eaton to discuss the purchase of clothing, club officials, the Club Constitution and other Club activities.  It was agreed that the Club's members would  continue racing under their old Club names until the end of September 2006 and early Velo Club racing would mainly be in the Cyclocross season.

At the same time, Erewash Borough Council planted a floral display outside the Town Hall with a caption to explain what was happening to the Town's two Cycling Clubs and their planned ambitions.  It stated that 'to keep pace with the changing face of modern cycling, the new Club intends to revitalise competitive and recreational cycling in Long Eaton and District as an accessible, safe, healthy and friendly sport and pastime for all'.  The floral display depicted the new Velo Club Long Eaton 'logo'.

An inaugural EGM was held at the WI Hall, Sawley on Monday, 24th July 2006 where the new Club officials were voted in.  It was decided to hold a photo-shoot at Long Eaton Town Hall followed by the first Club run to Melbourne Hall Tea Rooms in either August or September but this depended on the arrival of the new Club kit.  The kit arrived late and so the arrangements for the launch of Velo Club Long Eaton took place on Sunday, 22nd October 2006 (see attached photographs.  ] 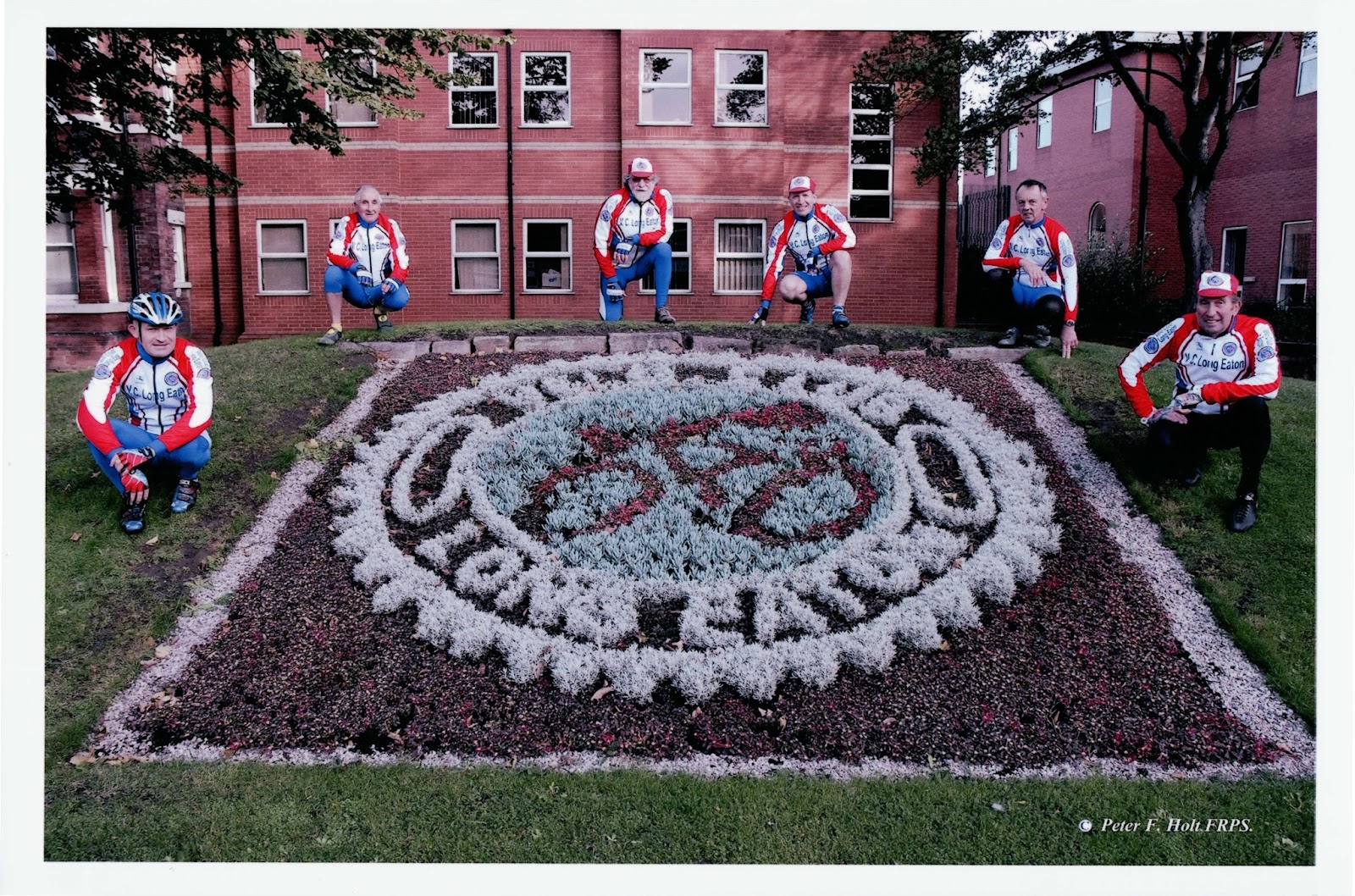 However, it wasn't all plain sailing.  There were still members on both sides who were not sure of the conclusions.  I decided to telephone a cycling acquaintance who was in the new Kettering CC where they had just gone through the same process with amalgamation of the Kettering Friendly CC and the Kettering Amateur CC.  He said that you will get members in both Clubs who cannot accept the merger.  He was correct but with the energy and enthusiasm of the majority we pressed onwards to make it happen.

The VCLE photo-shoot and Club Run to Melbourne was a big success with good publicity of the launch featured in Cycling Weekly, LE Advertiser, Derby Evening Telegraph and the Nottm Post. 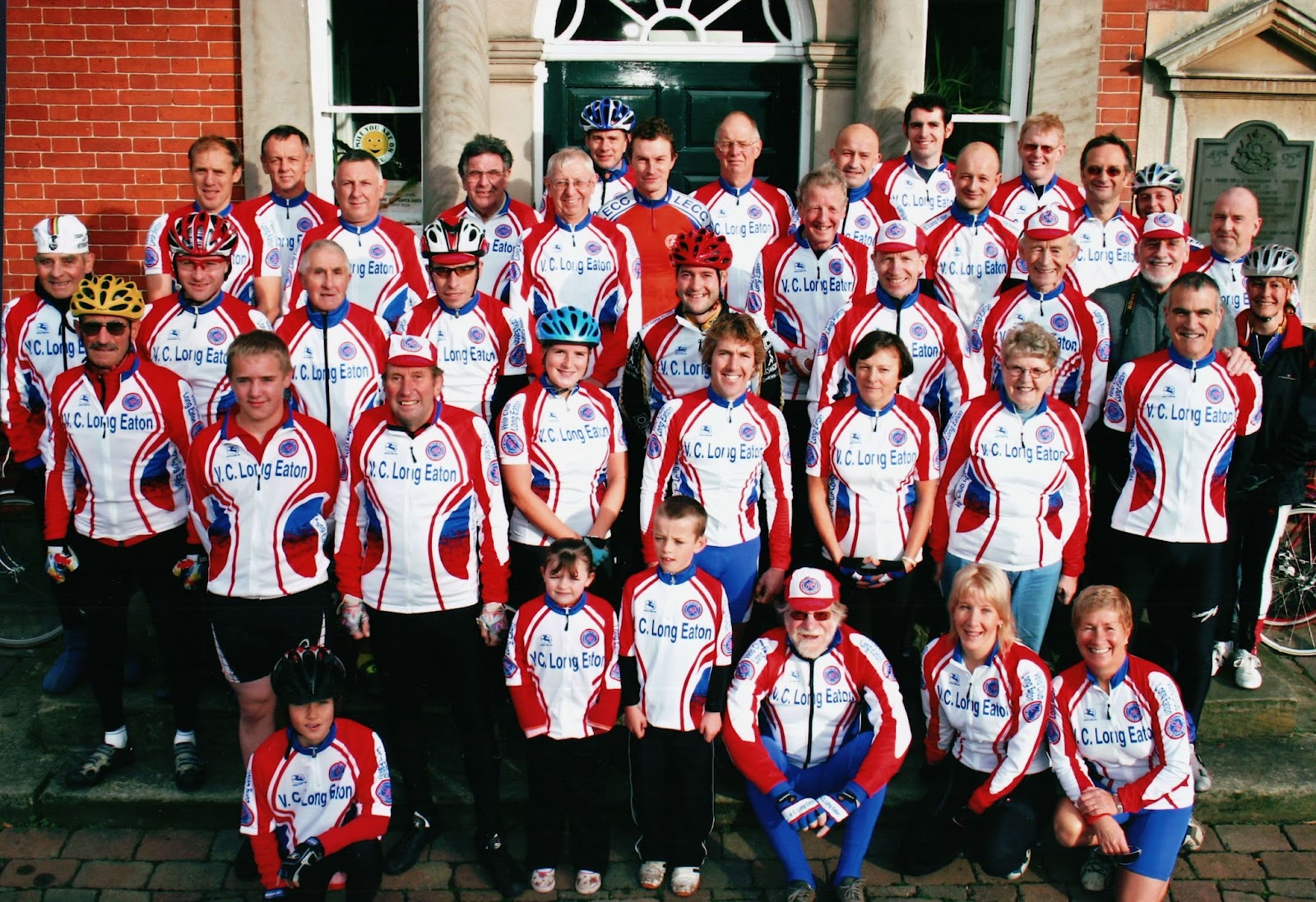 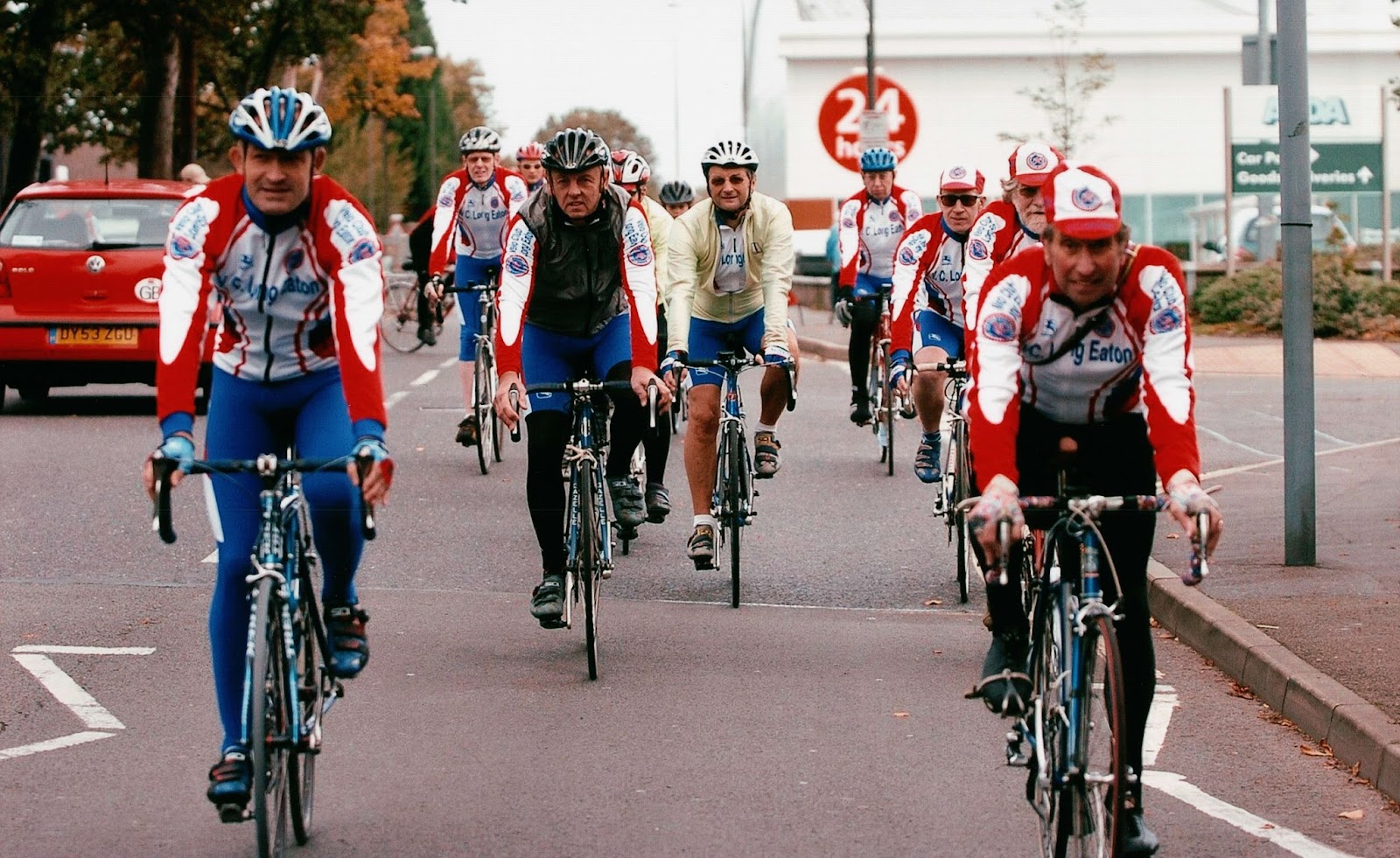 This was quickly followed on the 18th November by the 1st joint Annual Dinner and Prize Presentation at the Masonic Lodge, Elm Ave, Long Eaton involving prize-winners from the two separate Clubs for the first year. The guest of honour was Birmingham's Neil Peart, Walsall Roads Cycling Club, a prolific winner of time trials on a fixed wheel. 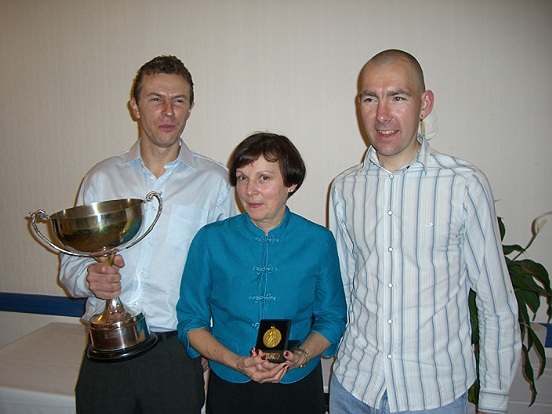 A Winter club runs list and racing programme was drawn up and Nigel Brown edited a club news sheet called Velo News. Plus the Club assisted in cycling section of the new Erewash Borough Council Triathlon.  A bank account was established, Social Secretary Ady Smith led a Sunday walk through Calke Park with a pub dinner  in Ticknall and Club Development Officer Eric Forshaw was keen to involve new youngsters and had plans to trigger the Go-Ride Scheme on West Park. However Eric, a retired Canon in the Church of England, took seriously ill and lost the battle for life.  I often wonder what would have happened to the Velo Club with the luxury of a large influx of young riders, a most difficult challenge to all cycling clubs.

The first racing success was soon provided by 11 year old Joe Kirkham from Aston on Trent, who scored back to back wins in the under 12's category in the Notts and Derby Cyclo-Cross league events at Markeaton Park and Alfreton. 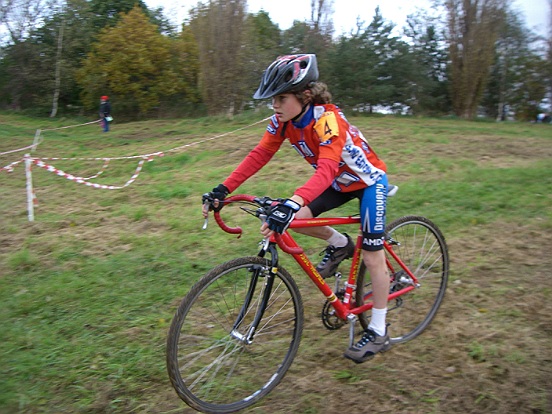 He became a prolific winner and Champion in Cyclo-Cross events, eventually signing for a sponsored club, Hargreaves of Southampton, then took to the Road and spent a couple of years with a French Club before injury forced him back home.

At the same time, the Club Champion Mark Redwood was establishing a new list of Club records at 10, 25, 50 and 100 mile distances and is still the man to beat in our current evening time trial league. 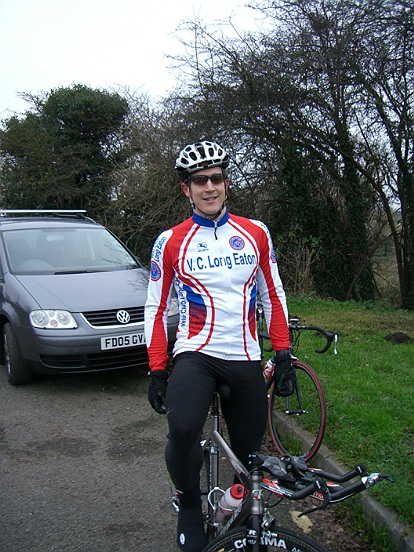 The newly formed Velo Club Long Eaton had attracted 100 members in 2006, and further helped by the boom in cycling after 2010, due to the Wiggins and Froome effect after their Tour de France wins, together with British Olympic Track successes, our membership now stands at 150 in our 10th Anniversary Year.

Other well organised, popular Club activities have also helped to maintain our strength, for example, our popular evening club time trials programme, now based at Kingston on Soar, our well attended Sunday Club Runs, which we must thank Brian Peto for, along with his Winter Turbo training sessions. And not 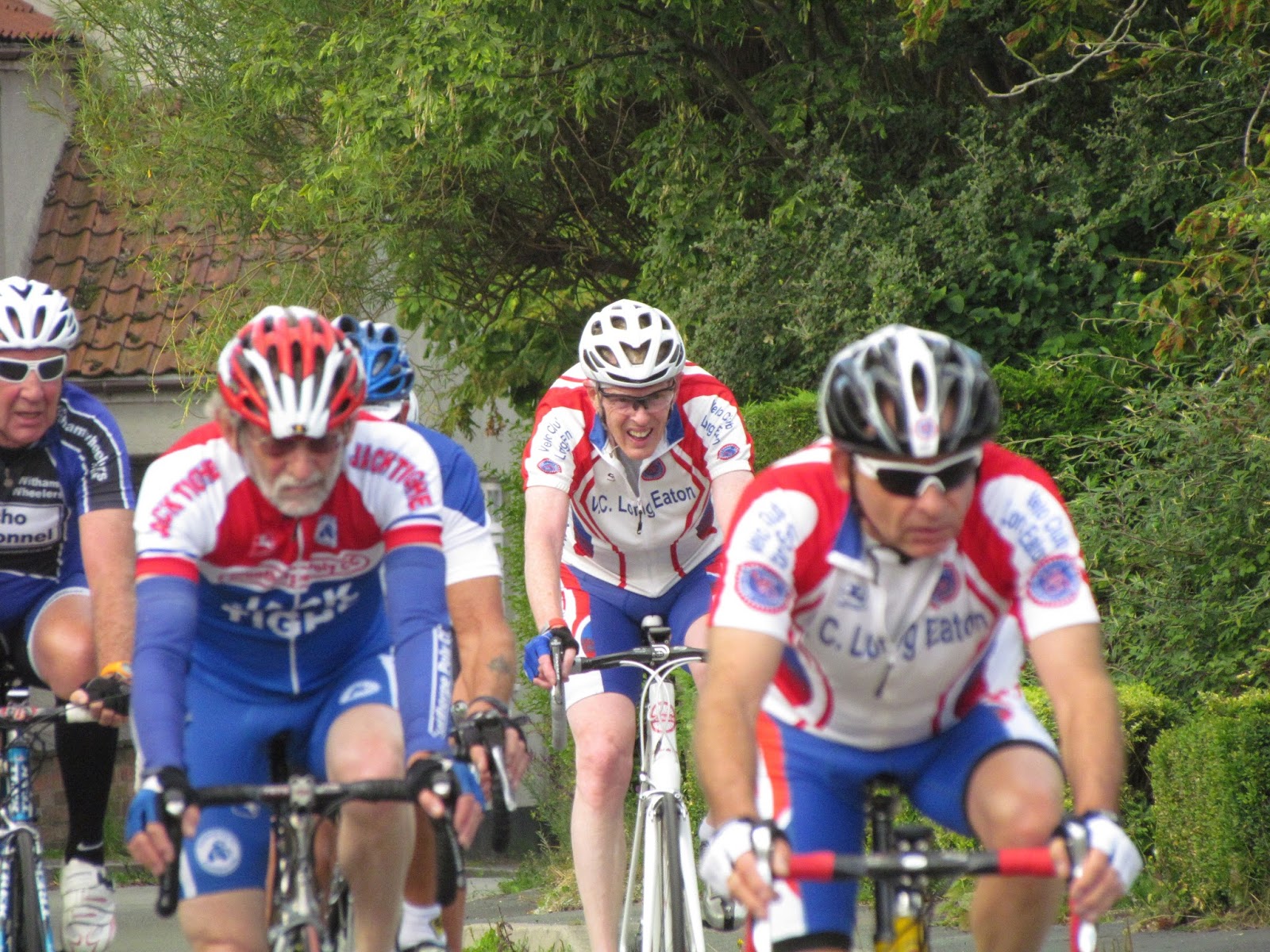 forgetting the now popular Notts and Lincs Velo 99 Road Races for our Veteran Roadmen where we supply a good number of the riders.

In the early years of the newly formed Club, there were doubters who thought it wasn't going to work and I always disagreed with this outlook, and on Sunday, 9th October 2016 will see our Special 10th Anniversary Club Run trace the original cycle route to the Melbourne Hall tearooms.

In all Cycling Clubs, members come and go, but we now have a strong base to ride into the next 10 years. 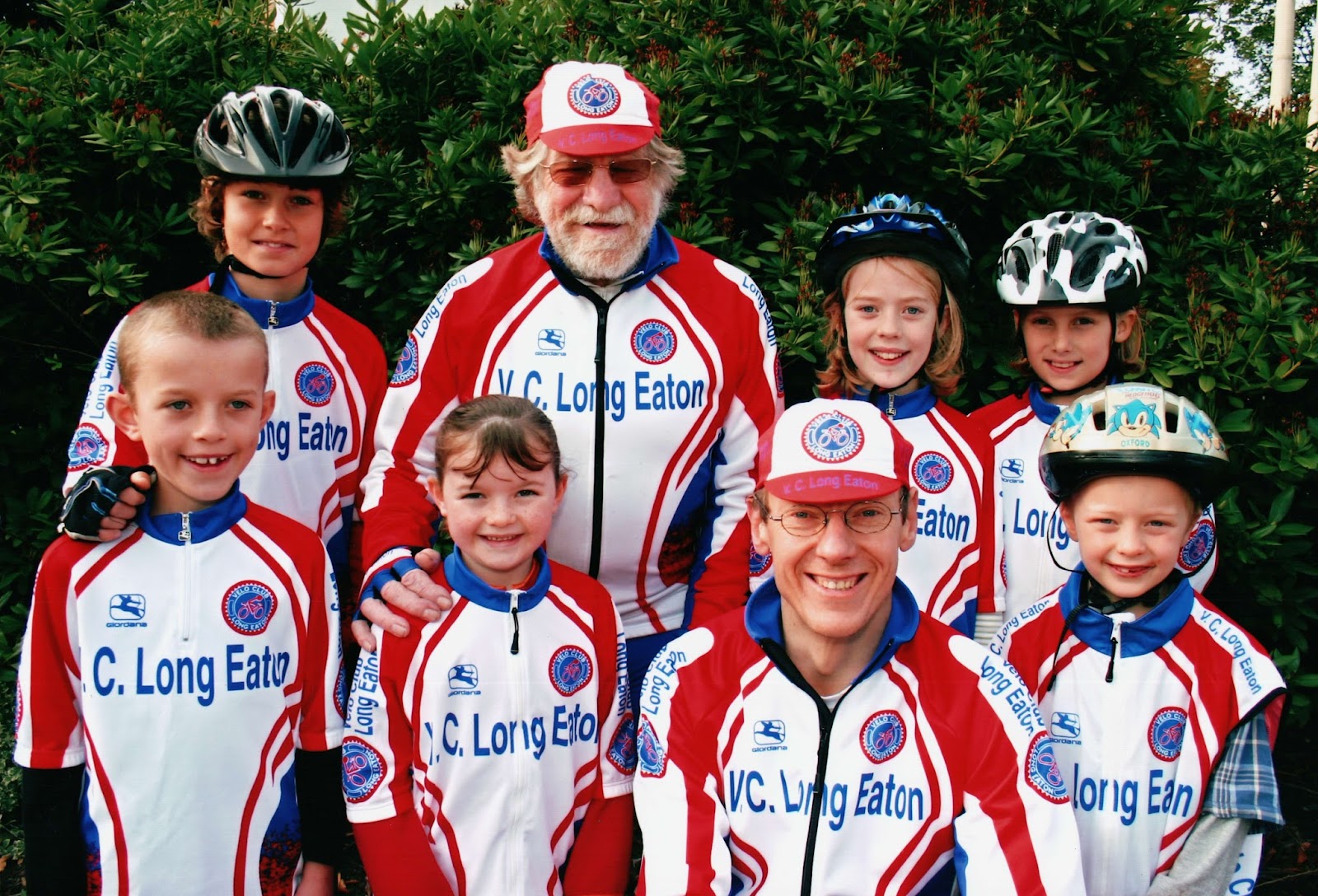