A critical step in dismantling systemic racism is helping people understand that although individual level prejudice and discrimination is part of racism, it is just one piece of a much larger, more complex system of oppression. The following six conceptual foundations can serve as building blocks for understanding the breadth and depth of the system of racism. Click on the “Resources” links for more information about each one.

Prejudice: Learned beliefs about a social group or members of a group based on simplistic assumptions and stereotypes. Anyone can hold prejudices about other groups.

Discrimination: The action of limiting access to goods, opportunities, or resources or negatively singling out someone for unequal treatment based on group membership. Discrimination is perpetuated by individuals and institutions and can happen whenever someone has the power to deny opportunity or resources.

Racism: A centuries-long, multi-faceted, and self-perpetuating system of oppression in which white people have had greater access to political, economic, and ideological power, and as a group have benefitted from the continued and cumulative impact of that power over time.

Prejudice is a belief

Discrimination is an action

Oppression is a system

The Role of Power

the ability to achieve goals even when others oppose those goals.

not inherently bad. Think of it like fire, it can be beneficial or it can be destructive.

unequally distributed by race in the United States in (at least) three ways that result in systemic racism: 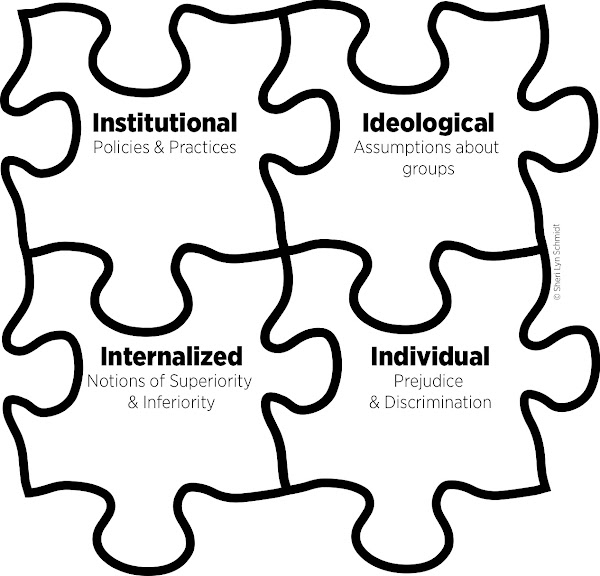 INDIVIDUAL prejudice and acts of discrimination combine with INSTITUTIONAL policies and practices to provide benefits for white people and limit access to resources and opportunities for People of Color. Discrimination at the individual and institutional levels is justified through widely-held IDEOLOGICAL assumptions that attribute greater value, normality, and humanity to white people and devalue People of Color. This ideology, which frames white people as superior, is so ubiquitous that it becomes INTERNALIZED by all of us through the socialization process, resulting in both explicit and implicit biases.

Resources for Learning about Racism

Follow the links to learn more about each of these six conceptual foundations of systemic racism.