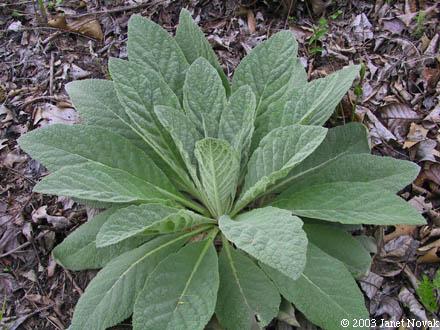 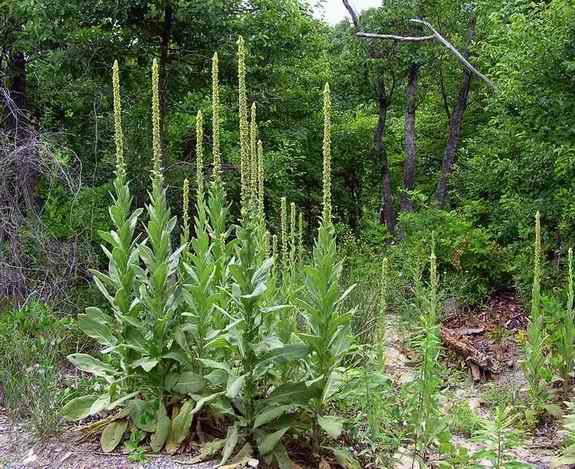 It is a hairy biennial plant that can grow to 2 to 6 feet tall or more. Its small yellow flowers are densely grouped on a tall stem, which bolts from a large rosette of leaves. It grows in a wide variety of habitats, but prefers well-lit disturbed soils, where it can appear soon after the ground receives light, from long-lived seeds that persist in the soil seed bank. It is a common weedy plant that spreads by prolifically producing seeds however, its seed requires open ground to germinate. This plant produces by seed and each plant has hundreds of capsules that can total up to 180,000 to 240,000 seeds per plant. After the second year of flowering the plant dies off.

Common mullein is a biennial and it produces a large, thick rosette of fuzzy leaves the first year and a single, stout, erect stem, that will grow up to 2-6 feet tall the second year. The leaves are alternate, overlapping one another, light green, densely wooly. The flowers are sessile, borne in long terminal spikes and are sulfur yellow and 5 lobed and an inch in diameter.

Herbicide that controls Common mullein is Escort. For more information and mixing instructions on herbicide read the label or call the CCWP office.

Common mullein can also be hosts to many insects, some of which can be harmful to other plants. It is a very minor problem for most agricultural crops, since it is not a very competitive species, being intolerant of shade from other plants and unable to survive tilling. Tea was made from the leaves in Europe for a sedate. Individuals with asthma smoked a combination of dried flowers and roots for relief.