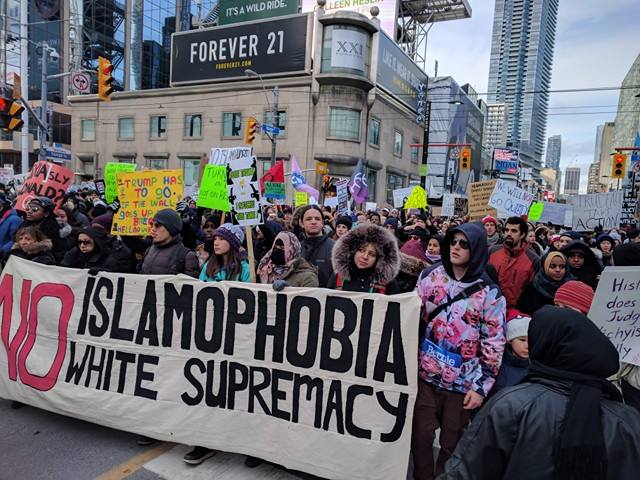 The war waged against Muslims and refugees worldwide has reached its boiling point with Trump’s Presidency.  These xenophobic, anti-Black, Islamophobic, anti-refugee racist, sexist, homophobic and transphobic policies have come to fruition. Walls and bans against Muslims and Refugees on stolen Indigenous lands. We affirm our solidarity with Indigenous nations whose lands we reside on.

Somalia, Sudan, Syria, Iraq, Iran, Libya and Yemen.  The geographies of our birth place that put targets on our heads. Families separated, refugees, asylum seekers and immigrants deported and detained,  trapped in between borders or taken back - our communities are being terrorized by white supremacist violence and domination.  Our movement is confronted by racist white nationalism, our lives are devastated in constant fear. We flee war, persecution, mass poverty in search for life – instead we get a fatal sentence for our faith.

On January 29th, in Quebec City  a group of Muslims were praying in a  mosque at the Quebec Islamic Cultural Centre when one gunmen came in and rang shots throughout this place of worship. Six have died, even more are injured. We mourn their lives.

Last summer during the holy month of Ramadan, a pig’s head was left at the doorstep. The president of the cultural centre hoped the event was an isolated incident, and responded with nothing but love and respect to the Centre’s neighbours.

The white supremacist hatred of Muslims and refugees from all intersections world wide is the colonizing force that fuels the identity and economy of America just as much as Canada. Trump’s power is extended to Trudeau’s. The institutional and systemic Islamophobic, anti-Black and racist policies  that are killing us at the border, in the streets, in our homes, at work and in our mosques are one.

We are under attack on all fronts, especially those of us who live in the intersections of Blackness and Muslimness and are Refugees who are the first to be silenced, ignored or forgotten.

Our resistance does not stop here. Now more than ever we must organize. This is a national call to action to plan demonstrations in your cities, Canada wide.  Join us, as we rise up!

1) The Canadian government must make an immediate public condemnation of the executive order by President Trump that bans Muslim visa-holders from seven countries and also bans all refugees from entering the US.

2) Canada must immediately open the Canada-USA border and grant permanent, not temporary, status.

3) Canada must end racist, anti-refugee, anti-Black, Islamophobic exclusion of migrants and refugees within this colonial border.

This includes ending the system of indefinite immigration detention. The federal government must create a regularization program so that all undocumented residents can live here with their families rather than fear mass deportation. Migrant workers in Canada must also be given permanent status and open work permits. We want real, not symbolic, Sanctuaries that guarantee access to services and refuse collaboration with Canadian and American border agents.

4) Canada must rescind all federal legislation that attacks racialized Black and Brown Muslims and refugees, including the Zero Tolerance for Barbaric Cultural Practices Act as well as anti-terror legislation such as Security Certificates and Bill C51.

Statement initiated by Black Lives Matter - Toronto with the support of:

No One Is Illegal - London, Ontario

No One Is Illegal - Toronto

No One Is Illegal -Vancouver Coast Salish territories

Anti-Colonial Committee of the Law Union of Ontario

Fight for $15 and Fairness

Put Food in the Budget! Campaign

Network of Women with Disabilities

Toronto Students for Justice in Palestine

Upping the Anti: a journal of theory and action