At the end of last year, Dan thought he was riding the wave of growth and opportunity at a start-up that designed LED-based navigational lighting for maritime and aviation installations.  Unfortunately, our iron-clad contract was actually chrome-plated rust, and we were shut down the first day of January.  Dan was optimistic that he would find a new job fairly quickly.  After all, just 4 years ago, he had multiple job offers.  Reality sunk in by the end of February - the few people who were hiring were extremely picky about who they hired.  Some jobs went begging for 6 months because applicants like me only had 9 of the 10 job requirements.  It probably didn’t help that I had passed that magic age barrier during these 4 years.

Through a friend, we both got involved in youth Robotics tournaments, which were quite exciting and inspiring.  These kids were smart and enthusiastic.  Dan reffed the competitions, which involved scoring each match, and keeping an eye out for violations.

Laura was elected to the neighborhood board, and promptly appointed president.  She has managed a couple of thorny issues, including what to do about the increasing deer population (end result - do nothing).

Dan learned of an indoor soccer league that wasn’t too cutthroat, and so he and Laura signed up.  It’s been a lot of fun, as Dan keeps trying to get his feet to remember past skills, and Laura adapts to really competitive matches.  So much fun, that we’ve played in every session all year long.

Jacqui really enjoyed her weeks in Barcelona, but her aching hip really slowed her down.  After some strong-arming by Dan, she was scheduled for exploratory surgery to determine what could be so painful, and yet defy traditional diagnostic tools.  Dan and Laura flew out to San Diego to provide support and comfort.  As it turned out, there really was something unusual: a type of internal abrasion on the surface of her femur which is very rare in young adults.  The surgeon was able to “clean it up” and then Jacqui started the long process of physical therapy.  It’s a good thing that her new apartment is on the ground floor.  It was all worth it to see her joy when she could run with the dogs and kick a ball again.

One weekend in the Spring, Dan and Laura went up to Westport CT.  Dan reffed during a tournament, catching up with some old colleagues.  Laura visited some friends, and together we visited our old neighborhood.  Our house was being raised and renovated, which ended up being excellent timing, as it survived Superstorm Sandy; some of the neighbors’ homes did not.

Laura and Dan kept playing in a classic rock band “Back To The Well”.  In March we reached the point where we needed to record some demos.  We spent a day in the studio recording the various instrument and vocal tracks, and Dan mixed them down.  You can hear them here: http://www.reverbnation.com/backtothewell.

In recent years, Dan observed that our family had become quite scattered.  We’ve never spent a lot of time together, and all our kids were growing up.  So over Easter, we rented a beach party house in Charleston SC.  It was a lot of fun walking on the beach, kicking a soccer ball, tossing a football, and flinging a frisbee - all at the same time!  We had several great meals from elegant to casual.  At one dinner, the boys decided to challenge each other to the 48oz porterhouse, last man standing ordered an ice cream sundae!  We’ll go back to our separate lives, overlapping occasionally, but this trip will be remembered for a long time. 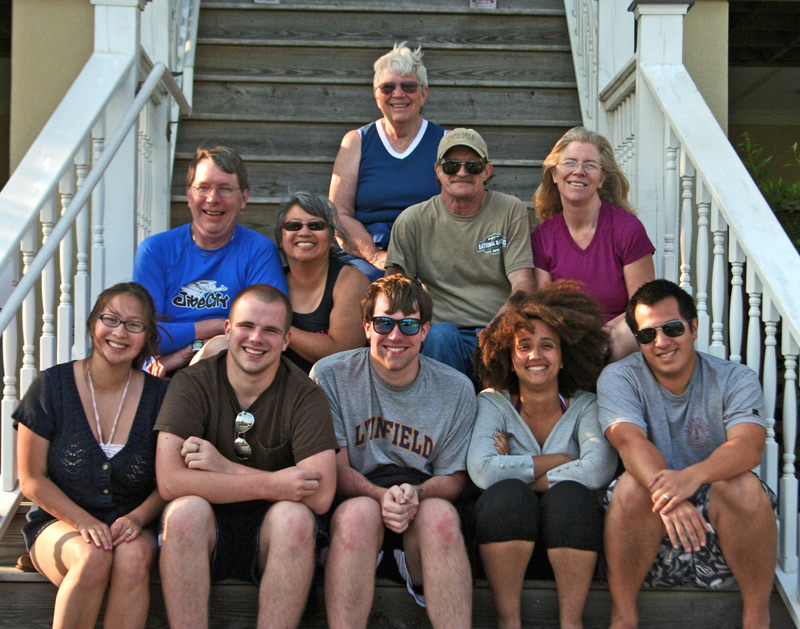 Dan kept on reffing soccer matches, both youth and adult.  Good exercise and it earned him some spare cash.

Dan’s job hunt continued with little success.  He discovered that applying online was not necessarily the best method.  It seems that resumes sent in this way can disappear down a black hole, and there’s no way out, as head-hunters can’t present you if you’ve already sent in your resume, even if it hasn’t been read or acknowledged.

In May we went to DC for the wedding of the kids’ first baby sitter.  She was glad to see us, and we had a good time.  We also toured Alexandria with a good friend.  In June, Dan went to visit his Mom in Florida, escorting her to a gala reception on behalf of the Charlotte County Symphony.

Laura’s schedule often gives her free weekdays in return for the weekend nights worked.  Since Dan was also available, we got in a lot of sailing on Hilfy.  Our first sail was before Memorial Day, and our last was well into October.  Laura’s tan was excellent, and Dan didn’t get too overcooked.

The annual Riverside Jam returned to Gt Barrington MA.  Our main performance got rained out, which gave us more time to play in a relaxed environment, which is the true spirit of a jam.  After that, we took a short sailing trip on a nice sloop.  Although you’d think we’d get tired of cruising the upper Chesapeake, we ventured into a couple of new harbors, and found new restaurants.  The weather was wonderful and we returned quite relaxed.

In August, BTTW had our first real gig.  We played the whole night on the second floor of a farmhouse converted to a restaurant.  Several friends came out to support us, and we had a lot of fun.  Unfortunately, the few other opportunities we pursued fell apart.

In September, we drive up to Exeter to start the planning for our upcoming (35th!) reunion.  While there, we had dinner with a long lost classmate who lives in Maine.

Although Dan had turned down a job offer with a long commute, he did accept a contracting position with an even longer commute.  The work is fun - if only it was closer!

In October, we headed out to Cali to see the kids.  The first weekend, we saw Ben and Yanessa, as well as Elyce and John.  We went to Big Game (Stanford v Cal), which was exciting, more so as we were victorious.  Dan had dinner with some Exeter classmates, while Laura ventured to Napa with Elyce, who was presenting her boutique chocolates to be paired with various wines of the region.  Then we took 3 days to drive down the Pacific Coast road, stopping in Monterey, Carmel, Morro Rock, and then Santa Barbara to visit with Uncle Jerry and Aunt Pat.  From there we went to LA, had dinner with a different set of Exeter friends, brunch with Cousin Kat, and then off to San Diego, where we stayed with an old friend from Westport.  We spent time with Jacqui and her man Ben, and went to a USD football game, watching the Toreros beat up on Dayton.

Thanksgiving was quiet, followed by the traditional Black Friday Jam.  Christmas will also be quiet, as we didn’t really know which Bowl game Stanford would be playing in (FYI - Rose Bowl).  We’re bringing all of the kids back for a late Christmas in January.

After 4 tumultuous years, Laura and CHOP agreed to part ways.  After a short break to take her boards, she will start as the Director of Neonatology at Riddle Hospital next Spring, which is a little smaller, and a little farther away, but hopefully a lot saner.

Those of you who keep track of all the threads in these letters may recall that we lived in Newtown CT for 8 years.  The massacre of Dec 14th has been quite painful.  While we don’t think we know any of the families directly, we loved that town, and nothing can bring those young lives back.

Even as we enjoy our quasi-solo lifestyle, we value our friends and our family.  Be sure to hug those you love as often as you can.  Take care of each other, and stay in touch.