The viral organizers that helped orchestrate the Internet Blackout against SOPA have released a warning signal to stop CISPA -- the Cyber Intelligence Sharing and Protection Act. The Internet Defense League raised their “Cat Signal” today to alert the internet about the controversial cybersecurity bill. Over 30,000 websites -- including Reddit, Duck Duck Go, and Craigslist -- are currently broadcasting an action tool that allows users to click to contact their Congressperson with the message, “CISPA is Back. This bill sacrifices privacy without improving security. We deserve both.”

CISPA is under fire today from a broad coalition of groups who have called for a Week of Action to raise awareness about CISPA’s detrimental effects on privacy, civil liberties, and freedom of expression. The bill would allow companies to share private user information with the government in ways that are currently illegal, and provide legal immunity to companies that share information for vaguely defined “national security” purposes.

“CISPA takes away people's 4th amendment right to privacy.” said Tiffiniy Cheng of the IDL and Fight for the Future, “That's why internet users are going to do what they're good at; the Internet is good at fighting for itself and the rights of every user. We've been able to tailor our responses to the unique threats and opportunities to free expression and rights online, and we keep winning."

The Internet Defense League (IDL) is a network of websites and internet users that are dedicated to sounding the alarm and mobilizing action whenever there is a major threat or unmissable opportunity for the free and open web. The IDL is a project of Fight for the Future, who have been working to expand it’s reach globally with new members around the globe. The CISPA action today was organized in collaboration with the Electronic Frontier Foundation (EFF.) The banner links to an action on EFF’s page that allows users to email and tweet to their legislators. 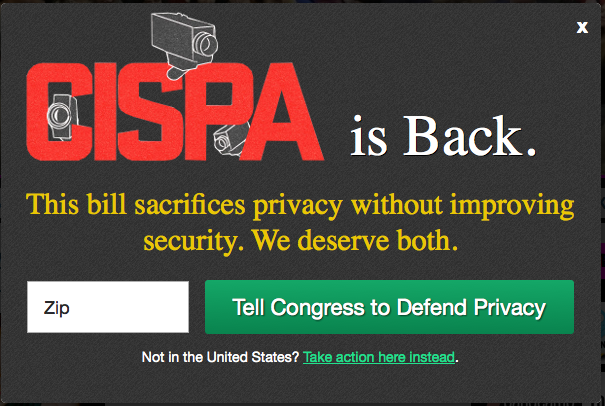