Over a year in the making, we are pleased to offer you an intimate look at Courtney’s inspiration writings and artwork.  Donors who contributed $50 or more to Courtney’s Fund in 2012 or 2013 will receive this beautiful book free of charge.  We are shipping the books in the coming days.  It’s a small thank for your tremendous support.

Courtney wrote with sincerity, courage and eloquence in her journal. By sharing her story, she inspired and encouraged many people to fight their own battles with cancer and live a passionate and purposeful life.   Few people knew that Courtney was also a talented painter.  At the same time as she was crafting CaringBridge entries, Courtney captured her emotions in a series of oil paintings of sweeping natural landscapes, and reflected on the everyday beauty of simple shapes and colors.

Over the past 18 months, we professionally scanned her canvases and sketches, and curated quotes from her writings.   When paired together, the writing and art of Courtney Harrington LeBoeuf tell an inspiration tale of how one amazing person approached life with optimism, passion, and determination when facing an impossible situation.  It’s an inspirational book.  And just as valuable for its impressive artwork. 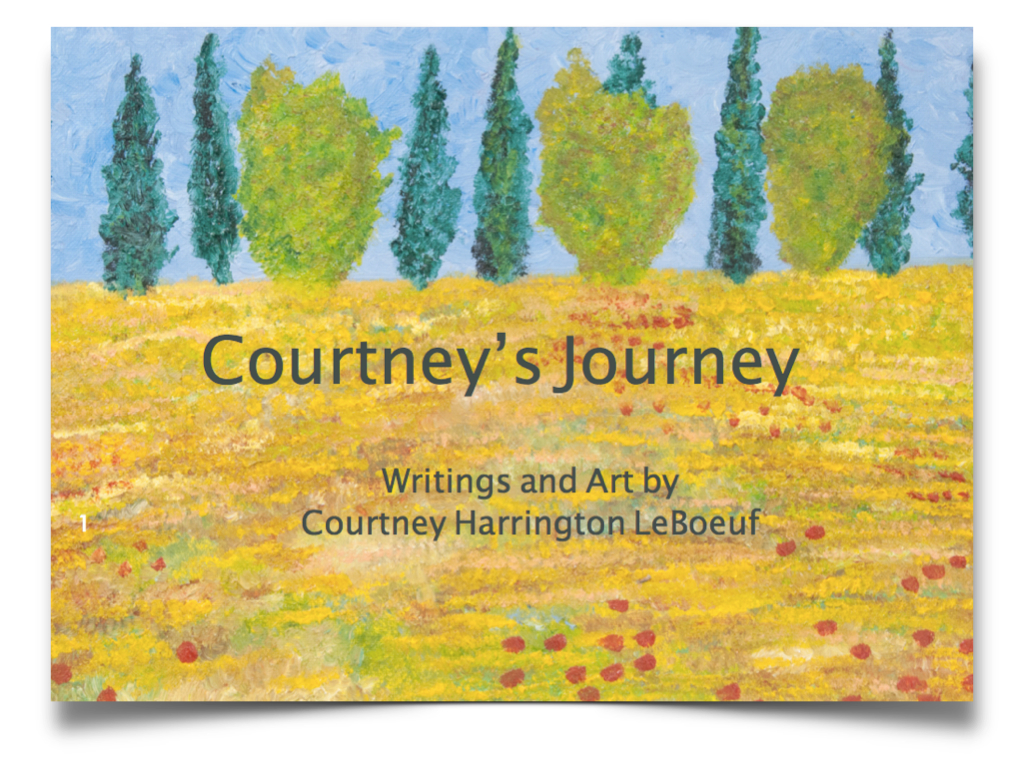 Receiving your copy of Courtney’s Journey

Donors who contributed $50 or more to Courtney’s Fund in 2012 or 2013 will receive this beautiful book free of charge.   If you do not receive your copy before Dec 31, 2013, please notify us and send your mailing address.

If you know of anyone who is going through a difficult time and would benefit from the book, please contact us and we will send them a free copy of the book.

The Campaign for Safe Cosmetics

This September, the Campaign for Safe Cosmetics engaged thousands of activists across the country in an effort to convince Target to clean up their beauty aisle.   Courtney’s Fund funded an action toolkit that offered practical tips and resources for grassroots supporters to take on-the-ground action.  And it worked!  After thousands of activists participated, Target has now launched a new standard to promote ingredient safety and disclosure!

Our friends at the Breast Cancer Fund write that “a growing number of retailers are beginning to respond to increasing consumer demand for safer products by stocking safer alternatives, while others, such as Whole Foods (with assistance from the Breast Cancer Fund) have created safe cosmetics purchasing policies and standards focused on screening out unsafe chemicals. We believe there is a great deal of opportunity to capitalize and magnify this retail shift to leverage broader change in the marketplace, motivating industry laggards to clean up their products and giving consumers better access to safer cosmetics and personal care products.”

Unsure what’s in your products?  Here’s a great resource.

Over a hundred Tulaneans attended the Class of 2003 Tulane Law School reunion this October.  The class honored the Courtney Harrington LeBoeuf Environmental Law Scholarship Endowment as their class gift.

In addition to being a talented attorney, we honored Courtney as a talented artist, writer, and photographer.  A silent auction featured 7 reproductions of Courtney’s artwork and a set of framed photography.  The auction raised over  $2,000 and 100% of the money raised was used to grow Courtney's endowment!

Here’s the magical part.  Tulane Lawyer Magazine profiled Courtney and the scholarship in their Fall Issue  and then the Tulane Planned Giving newsletter picked up the story.  Through additional donations from Courtney’s Fund donors (you!) and the Tulane community, another $30,000 was raised for the Scholarship endowment!  Amazing.

Courtney’s passion for Tulane and environmental law will continue through the endowment by awarding an annual scholarship to a rising third year Tulane law student who demonstrates a commitment to environmental law.  Donate directly to the scholarship. 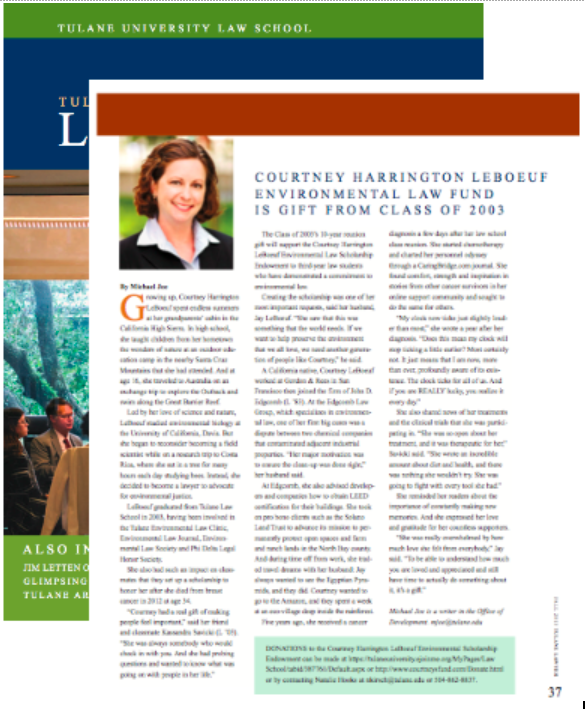 Please make your donation before December 31, 2013 in order to qualify for a 2013 tax-deductible donation to Courtney’s Fund.

Thanks to your generous donations, we awarded $8,500 in grants to to support future initiatives in environmental protection and eliminate the environmental causes of breast cancer.  Next year, we begin awarding Tulane Law scholarships, increase our collaboration with YMCA Camp Jones Gulch, The Breast Cancer Fund, and explore additional environment outreach initiatives.  Courtney’s Fund donations total $16,691 YTD as of December 7, 2013.

To unsubscribe: reply with the word “unsubscribe” in the subject or body of your email.