Among the private papers of Maj. Robert Anderson, commander of the Union garrison at Fort Sumter, is a single elegant sheet of faded lavender-blue notepaper, neatly creased where it was once folded between the gloved fingers of a Confederate adjutant. The note, preserved today in the Library of Congress, reads: 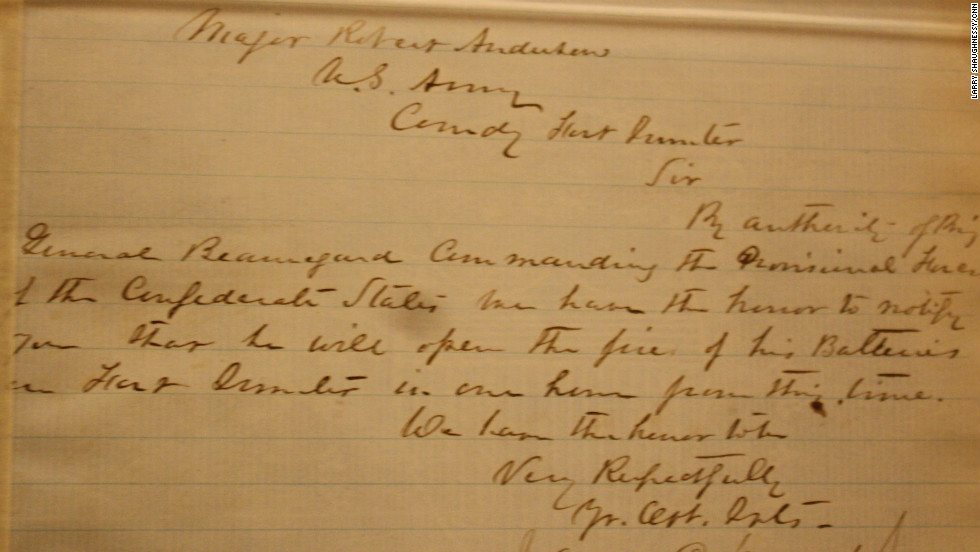 By authority of Brig General Beauregard commanding the provisional forces of the Confederate States we have the honor to notify you that he will open the fire of his Batteries on Fort Sumter in one hour from this time.

We have the honor to be

The two aides handed this note to Anderson with a gentlemanly bow. He escorted them hospitably to Sumter’s wharf, where their longboat awaited with its slave oarsmen. Before the Confederates stepped into the launch, Anderson shook each man’s hand and bade them all farewell: “If we never meet in this world again, God grant that we may meet in the next.”

Returning to his officers and men, Anderson hinted that all except the sentries should return to their bunks and try to get some sleep. It was clear that Sumter’s defenders could accomplish little until sunrise, since the garrison had no lights;the fort’s lamp oil and candles had long since run out, along with all provisions save a little hardtack and some half-rancid pork. After breakfast, such as it might be, they would begin to return fire. The only other order he gave was to raise the fort’s flag, which was duly run up its staff, disappearing into the blackness above. But most of the officers and soldiers waited expectantly to see the war begin. 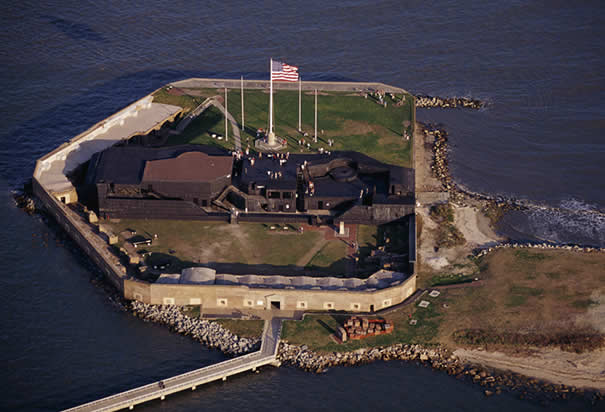 One of those on the ramparts peering out into the night was a blue-eyed, dark-haired young Irishman named John Thompson, a private, who left what may be the only surviving description of the battle by a rank-and-file soldier: a long letter that he sent two weeks later to his father back in County Derry, Ireland. Even though he planned to return home to the old country as soon as his enlistment expired in a few months’ time, Thompson felt a surge of pride as “we hoisted our colors the glorious ‘Star Spangled Banner’ and quietly awaited the enemies fire.”

As an immigrant who, on his enlistment form, described his occupation as “laborer,” Thompson was typical of the men who were now about to risk their lives in defense of Fort Sumter. Some two-thirds of the men in the Union Army in the antebellum years were foreigners, mostly German and Irish. Officers often complained of soldiers who could not understand commands in English, and a significant share of recruits were unable to sign their own names to the enlistment form, let alone pen a letter. (Thompson’s missive to his father may well have been dictated to a better-educated superior.)

Sumter’s garrison was even more heavily foreign-born than average: of the 73 enlisted men whose birthplaces are known, just 13 were from the United States. The roster of privates reads like the roll call in an old World War II movie: Murphy, Schmidt, Onorato, Klein, Wishnowski. Their names, unlike those of Sumter’s officers, are almost forgotten today – a simple bronze tablet at the site records them – and were equally unknown to most Americans in 1861, despite the intense public interest in Sumter and the exhaustive newspaper coverage of every new development at the fort. Such men were considered mere ciphers, certainly not likely to become heroes.

At those rare moments when the entire nation went to war – 1775, 1812, 1846 – soldiering suddenly became a noble calling for patriotic Americans of every class and condition. So it would become again soon in 1861. But the peacetime Army that garrisoned Sumter and other forts as the war began was a different matter. Service in its ranks was considered a last resort for men who couldn’t get by otherwise in the merciless economy of 19th-century America – or the first resort of immigrants with no resources or connections. “Uncle Sam” – a figure known even to those newcomers – provided a roof over their heads (even if it was often one made of canvas), shoddy woolen uniforms and food consisting mainly of bread and coffee, with occasional salt pork. 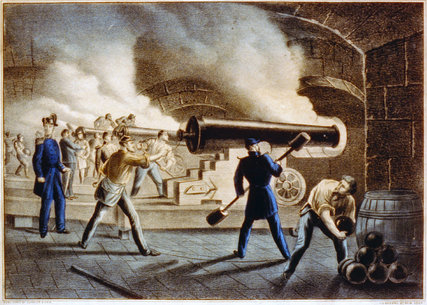 A British traveler, while expressing his esteem for the American officer corps, disdained common soldiers as a “rag-tag-and-bobtail herd … the scum of the population of the older States, or … the worthless German, English, or Irish immigrants.” Enlisted men existed in a different world than their superiors, even in such unusually close confines as Sumter’s: the officers’ letters and memoirs almost never mention soldiers as individuals, much less by name, and as provisions dwindled, everyone took it for granted that officers would get the last of the salt pork, while privates enjoyed their one daily biscuit apiece.

Enlisted men even looked physically different from their superiors. Although several of Sumter’s officers – including Capt. Abner Doubleday and Surgeon Samuel W. Crawford – were over six feet tall, not a single private was, according to their enlistment records. The average height of the garrison’s foreign-born privates was only 5 feet 5-and-three-quarters inches tall, fully three inches shorter than the average native-born male of the mid-19th century. This was almost certainly a result of poor nutrition in childhood. The average age of Sumter’s enlisted men was 29 – four years older than the typical later Civil War serviceman – with several of the men in their 40s.

It might seem inevitable that the months of tension and uncertainty, crowded and makeshift quarters, and sparse rations, these enlisted men would have been driven to quarrels, brawls or worse. Throughout the winter of 1861, newspapers in both the North and South buzzed with rumors of soldiers at Sumter being shot for mutiny. Yet the reports from inside the fort show quite the opposite case: the longer the siege lasted, the more tightly the group knit itself together. Thompson told his father of his fellow privates’ scorn for the “rash folly” of the rebels: “They no doubt expected that we would surrender without a blow, but they were never more mistaken in their lives.”

Even the snobbish Crawford wrote often in his diary and letters of the men’s high spirits, and said that when the final battle loomed, “it increased their enthusiasm to the highest pitch.” If anything, the common soldiers’ morale was higher than their officers’. Although it is often said today that half the Army resigned in 1861 to join the Confederacy, this is untrue. Only 26 privates out of all 15,000 ended up defecting to the rebels – compared to more than 300 out of the 1,000 or so men in the officer corps. (Indeed, one of Sumter’s Union lieutenants would end up fighting, and dying, for the Confederacy.)

Very few, if any, of the enlisted men who stood on the battlements at Sumter awaiting the first shot of the war had ever been on the receiving end of an artillery barrage. Until just days earlier, all of them had fully expected to be evacuated to safety at any moment by orders of President Abraham Lincoln. (So had their officers; Sumter’s chief engineer had busied himself making arrangements to return a borrowed mustard spoon to a Charleston friend now serving with the rebels.) It must have seemed surreal that they now had to defend themselves against fire from what had just recently been friendly territory – including even from their own former fort. They knew that militarily, Sumter was almost worthless to the Union. They were being asked to die for a symbol.Yet they were ready to do so. 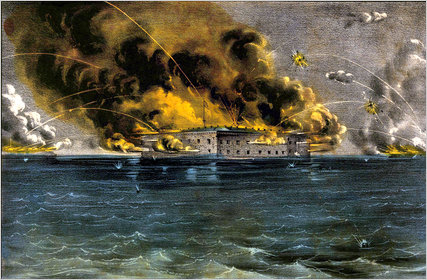 “At 4 1/2 a.m., the first shell came hissing through the air and burst right over our heads,” Thompson would tell his father. “The thrill that ran through our veins at this time was indescribable, none were afraid, the stern defiant look on each man’s countenance plainly told that fear was no part of his constitution, but something like an expression of awe crept over the features of everyone.”

Out across the water, all around the harbor, unseen cannons were being carefully adjusted and aimed. And then the full barrage began.

1) Who was the Union General in charge of Ft. Sumter?

2) What were conditions like inside the fort before the attack?

4) How many of Ft Sumter defenders were foreign born?

5) Why did so many Immigrants become soldiers?

6) The longer the siege lasted, what happens to the soldiers?

7) How many Privates in the Union Army of 1861 joined the Confederates?

8) How many of the Union officer corps (Officers) joined the Confederates?

“With daybreak the heavy bombardment recommenced from all the batteries; the fire was returned from Fort Sumter with vigor until about 8 A.M., when Fort Sumter was perceived to be on fire. Major Anderson’s fighting then slackened, but the fire of the besiegers increased in intensity. At about 10 A.M. Major Anderson lowered his flag to half-mast in token of distress; perhaps as a signal to the United States vessels which were lying at anchor...”

9) What things were perceived or noticed from Fort Sumter around 8 A.M.?

10) What does Major Anderson do at 10 A.M. on the second day of the bombardment? Why was this done? 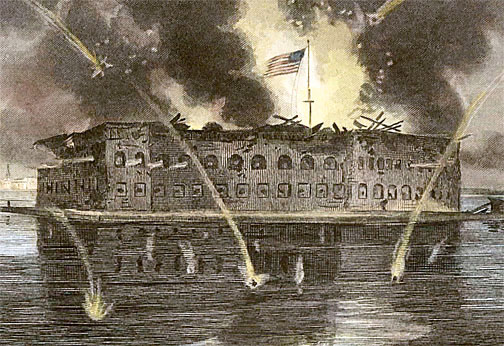 The following excerpts come to us once again from Captain Abner Doubleday. These excerpts are from April 13th, the second day of the bombardment of Fort Sumter.

“By 11 A.M. the conflagration was terrible and disastrous. One fifth of the fort was on fire, and the wind drove the smoke in dense masses into the angle where we had all taken refuge. It seemed impossible to escape suffocation. Some lay down close to the ground, with handkerchiefs over their mouths, and others posted themselves near the embrasures, where the smoke was somewhat lessened by the draught of air. Every one suffered severely....Had not a slight change of wind taken place, the result might have been fatal to most of us.”

The Blue and the Gray by Henry Steele Commager

11) Explain why so many of the men in Fort Sumter suffered so much by 11 A.M. on the

second day of the bombardment

12) What measures were taken by the soldiers inside Fort Sumter to lessen their suffering?

Please take your answers and paste them into this form