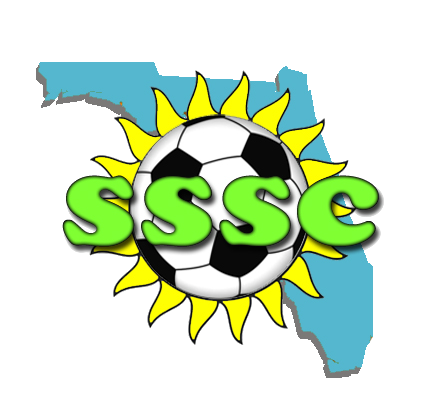 In all Sunshine leagues we want to stress the importance of safety, sportsmanship and fair play. It is more important that play be safe than which team wins. Referees are instructed to make calls that enforce safety even if it costs a goal or penalizes the offended team by stopping play. The referee will use “Advantage” judiciously for the more experienced players. Red cards for fouls/abusive language (even aimed at own team members), taunting, and serious foul play will be used. Fighting is not tolerated and will be treated as such.

The following list of rules has been compiled together by the league and summarizes all 7v7 soccer leagues.

2.     THE BALL will be regulation #5, properly inflated, without loose flaps/panels. The league does NOT provide balls.

o      The Game shall be played by 2 teams each consisting of not more than 7 players on the field. Teams must have a minimum of 4 rostered players present to begin a game and must have 4 players to continue a game.

o      All players must be 18 and signed in on a Sunshine team for that particular league on a waiver form to be eligible to play. Failure to do so could result in a forfeit. A forfeit win is counted as 5-0 score.

o      COED TEAMS 7 players on the field. COED ratio of 4 men and 3 women on the field with at least one female on the field at all times and no more than 4 men. A minimum of 4 players from the team's roster must be present or the team will forfeit the game.

o      MEN’S & WOMEN'S TEAMS will play 7 on 7. A minimum of 4 players from the team's roster must be present or the team will forfeit the game.

o      Teams may pickup one guest player at no penalty. Any pickups in addition to this will result in a 1-goal penalty per player if brought to the official’s attention BEFORE the game, HOWEVER AT NO TIME CAN A TEAM PICKUP PLAYERS TO ALLOW FOR SUBS. If a team has the correct number of players to play in either sex, no pickups are allowed. If an existing pickup player is found to be used DURING the game, a 2-goal penalty will be assessed. If more players from your team show up to allow subs in that sex, the pickup player must be removed. Remember that 4 rostered players must be present and playing to avoid a forfeit.

o      Rosters are frozen which means all waivers must be completed by the 2nd week of the season. Any player without a completed Sunshine liability waiver after the deadline will be crossed off the roster and will be ineligible to play that season. Note that all players that play in the 1st week must have their waiver completed before the start of the game. Playing with ineligible players may result in a forfeit; Sunshine staff will make this call. It is the responsibility of the team captains to make sure all players are on their team roster and are eligible players for all games.

o      Players may NOT play on more than 1 team in the same division. If a player is found to be in violation of any of these rules, their team(s) will be forced to forfeit.

o      Random eligibility checks may be done at any time during the league. If a team is found to have any ineligible players it will result in an immediate forfeit. It is required for all players to be able to produce a driver’s license, passport or state ID at each game in the event that a player is challenged for eligibility. If you cannot provide proper documentation when challenged, your team must forfeit the game.

4.     SUBSTITUTIONS are allowed at any time (on-the-fly), just make sure the player leaving the field exits at the same time and same location as the player entering the field.

o      Uniforms shall consist of league issued Sunshine shirts. Any deviation from the league-supplied shirts must be made in a manner that all shirts remain similar, be the color assigned to the team, and distinctly different than those of other teams.

o      Shoes are required. No sharp or metal cleats are allowed.

o      No braces with exposed metal are allowed. Any knee or other braces that may be an issue can be banned per the coordinator's judgment.

o      No jewelry will be allowed (wedding bands and stud earrings are ok).

o      Unpadded hard casts are not allowed. Soft casts cannot be heavier than the normal arm.

6.     REFEREES enforce the rules and maintain safety. They will have the last word. Excessive arguing will result in a yellow card or even in extreme cases, a red card as well.

7.     DURATION of the game is two 25-minute halves separated by a 5-minute half time. Regular season games may end in a tie. If for any reason the game should be cancelled with more than half of the game played, the game and the score are considered final.

8.     OVERTIME; playoff games may have two 5-minute sudden death overtime periods followed by penalty kicks, in the result of a tie after regulation. Any player on the roster may take the 5 penalty kicks taken at the end of the game, whether on the field at the end of the overtime or not. COED kicks must be taken by 3 men and 2 women in any order. All shootout kicks are worth one point. If after 5 kicks the score is still tied, kicks will be made with remaining players with no player kicking twice until everyone has gone. COED extra kicks will be taken alternating men and women until one team wins.

9.     OUT OF PLAY is when the ball wholly crosses the boundary or when the referee stops the play. Players are encouraged to always “play the whistle.”

12.  FOULS AND MISCONDUCT! Sunshine issues yellow cards as a warning and "cooling" off for players who are either dangerous or dissenting. If a yellow card is issued the player is sent off and cannot return for 2 minutes and that team plays a man down, even if a goal is scored during the 2 minutes. The 2 minute penalty does not carry over from half to half. If the referee deems a players repeated misconduct to warrant a red card, it will be issued. If a red card is issued that team has to play a man down for the remainder of the game and the player may have to sit at least one additional game, pending review by the league. Should a player off the field receive a yellow, the team must play down a player for 2 minutes.  Should a player off the field receive a red card, the team will have to play down a player for the remainder of the game. Any player or fan is encouraged to root for their own team but rooting against teams or use of disparaging language is discouraged and could result in penalties of players or dismissals of fans. Any fans of teams may be asked to leave by Sunshine staff. Refusal to leave could result in forfeiture of games.

13.  No sliding or slide tackles. A slide is defined as going down to the ground to get the ball - it does not have to be a slide tackle and the ball does not have to be in possession of an opposing player, within another player's playable area intentionally or not. Sliding to save a ball that is about to go out of bounds or to shoot is allowed, but only when another player is not (in the eyes of the referee) in “harm's way” of the slide. If a slide is near a player, intentional or not, a foul will be called. Goalies must lead with the hands or body when going for the ball near another player. If the referee calls you for a slide "tackle" you may receive a 2 minute yellow card.

14.  FIGHTING will not be tolerated. Players are to control themselves and their teammates at all times. If, for any reason, a punch is thrown, there will be an automatic 15 game suspension given. Suspensions will be reviewed by the committee and may be longer than the initial 15 games. If a player who has already served a suspension, for fighting or harassment, is ever seen throwing another punch in any Sunshine league, that player will be banned for life from all Sunshine leagues.

15.  HARASSMENT will not be tolerated. Again, players are to control themselves and their teammates at all times. Harassment will be defined as; the act of systematic and/or continued unwanted and annoying actions of one party or a group, including threats and demands[i]. The line will be drawn whenever any personal attacks, such as race, religion or gender, are directly referred to any opponent, official, fan, teammate, staff member, ect. in a negative manner. The league will review each and every case brought to their attention, whether or not a card was given, to determine the severity of the harassment and the length of suspension. The minimum suspension for any such harassment is 3 games. Just as with fighting, any player who already served a suspension for either harassment or fighting, in any Sunshine league, will be banned for life from all Sunshine leagues.

16.  FREE KICKS will be indirect, except penalty kicks. The defending team must give 6 yards.

17.  HANDS are not to be used by any player while the ball is in play, other than the goalie which can handle the ball with their hands at any time other than when a teammate intentionally plays the ball to their goalie with any part of their body below the waist or when in-bounding the ball. This will result in a free kick.

19.  NO THROW INS; re-start with a kick in from the field of play within 1 yard of the point where the ball left the field. All kick-ins are indirect.

20.  GOAL KICKS are taken from within the goal box and must leave the goal box before being touched by another player. The opposing players do not have to give any room off the ball as long as they are outside of the box - it is up to the goalie to back the ball off the required 8 yards. Goal kicks or kick-ins do NOT have to touch the field of play or a player, before crossing the midfield.

21.  NO PUNTING Keepers must throw the ball or play it to the ground. Drop punts are not allowed.

22.  CORNERS You cannot move the corner flag to take a corner kick. Corners are indirect.

23.  ADDING TO YOUR TEAM After the first game of the regular season, any team looking to add players must get approval from Sunshine. Throughout the regular season, Sunshine has the option to add to your team (with the team captain’s permission) until you reach the advertised maximum number of players. The add/drop deadline from the roster is week 2.

24.  REFUNDS Sunshine is not responsible for any refunds at any time during the season. If a party cannot continue the season, it is the responsibility of that party to contact their team captain to replace themselves on the roster, if before the add/drop deadline. Also they must notify the Sunshine office of the change.

25.  PLAYOFFS are a single elimination tournament with seeding based on regular season standings. All teams make the playoffs. If a team plays 8 games, their 8th game will not count toward the standings. The maximum goal differential for a single game will be capped at +5, forfeits will be recorded at 5-0. Playoff seedings are based on the following criteria: 1) most total points (with 3 for win and 1 for tie), 2) highest goal differential, 3) fewest goals allowed, 4) most goals scored, 5) head-to-head play (if any), 6) best record vs. common opponents, 7) coin toss.

*Any situations that may arise that are not listed in these rules, Sunshine will refer to FIFA rulings.