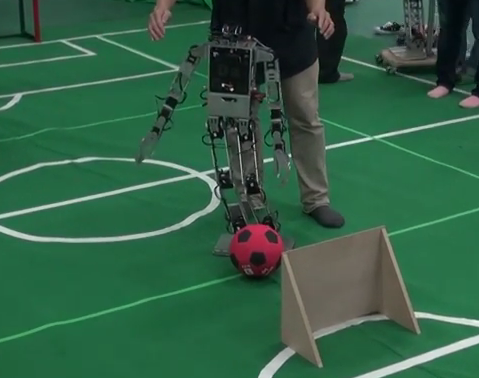 The following rules and regulations govern the penalty kick event of HuroCup, a robotic game and robotics benchmark problem for humanoid robots.

Latest Version of the Rules for HuroCup

The latest official version of the rules of the game for HuroCup is always available from the HuroCup Facebook Page.

Changes to the Penalty Kick rules of HuroCup

In 2020, random start points will be introduced for Adult Size kicker robots. Please refer to PK-7.6 for details.

In the penalty kick challenge, the robot must approach a ball, dribble it through a set of simulated defenders into the shooting zone and then kick it past a simulated goalkeeper into the goal.

The following laws describe the specifics of the penalty kick event. For general specifications relevant to all HuroCup events (e.g., robot dimensions, playing field and lighting, the responsibility of the referees) please refer to General - HuroCup Laws of the Game.

[PK-1.4]: An area $AW wide and $AD deep centered directly in front of the goal is called the goal area.

[PK-1.5]: An area $SW wide and $SD deep centered directly in front of the goal is called the shooting area.

[PK-2.1]: Please refer to General - HuroCup Laws of the Game for detailed information about the ball.

[PK-4.1]: Please refer to General - HuroCup Laws of the Game for detailed information about the players.

[PK-5.1]: Please refer to General - HuroCup Laws of the Game for detailed information about the referee and his or her duties.

[PK-6.1]: Please refer to General - HuroCup Laws of the Game for detailed information about the assistant referee and his or her duties.

[PK-7.2]: The only robots allowed to move during a penalty kick are the designated kicker and the goalkeeper.

[PK-7.3]: Each robot may have at most one human handler associated with it.

[PK-7.5]: A human handler may only enter the playing field or touch his/her robot with the permission of the referee. The kick will be declared invalid if the handler touches the robot.

[PK-7.7]: The designated goalkeeper must be positioned so that a part of the robot touches the goal line at the start of the game.

[PK-7.8]: Three wall obstacles as described in Obstacle Run - HuroCup Laws of the Game (Wall Obstacles) will be placed $OD away from the goal line. One obstacle is centered along the goal line and the other two obstacles are placed so that the distance between obstacles is at least $OC.

[PK-7.9]: Two additional defender obstacles are placed at random inside the shooting zone. The defenders are black paper cutouts with a maximum width of 30cm and a maximum height of 60cm.

[PK-7.12]: The designated kicker is not allowed to touch any obstacle.

[PK-7.15]: During the time between the start of the penalty kick and the time that the ball has been kicked at the goal, the robot may move freely in the goal area as long as it remains completely inside of the goal area and in a standard walking posture.

[PK-7.16]: Any infringements of the rules shall be dealt with according to the general HuroCup rules as far as those rules are applicable.

[PK-7.17]: The penalty kick begins by the referee blowing a whistle.

[PK-7.19]: After the end of the penalty kick, the next robot is designated the kicker.

[PK-8.1]: There are five tries in one round of the competition. Each try consists of all robots being designated the runner exactly once as a kicker and once as a goalkeeper. The kicker receives one point for legally touches the ball inside the shooting zone to follow up the dribbling and one point in which it manages to score a goal. The goalkeeper receives one point for legally save a goal (if the goalkeeper touches the ball and it does not go in afterwards).

[PK-8.2]: Any robot that has not scored a goal at least once is automatically awarded no rank and 0 points.

[PK-8.3]: Among the robots that have scored at least one point, the robots are ranked (i.e., 1st place, 2nd place) based on the greater number of points scored.

[PK-8.4]: In case of a tie, i.e., more than one robot having scored the same number of points, the robots will be ranked based on the total points scored from goals and follow by total time required to score all goals.

For more details about the point allocation, please refer to Point Allocation [Organization - HuroCup Laws of the Game].

[PK-9.1]: In case two or more robots have the same number of points after all rounds in the penalty kick event, the sum of the goals in all rounds will be used a tiebreaker.

[PK-9.2]: In case two or more robots have the same number of points after all rounds and are still tied after applying the previous tiebreaker, the maximum number of goals in a single round will be used as tiebreaker.

[PK-9.3]: In case two or more robots are still tied after applying the previous tiebreaker, the time for the maximum number of goals in a single round will be used as tiebreaker.