Evan Greer, Fight for the Future

Photos and Video: New NSA video produced by Evangeline Lilly
Last night’s debut projected onto side of building in Manhattan for crowd of 300

New York, NY – Today, Fight for the Future and Demand Progress released a new crowdfunded video, narrated and executive produced by actress, activist, and author Evangeline Lilly, to explain how the National Security Agency surveillance programs really work and encourage people to speak out at the upcoming StopWatchingUs rally in Washington, D.C on Oct. 26.

"I want to live in a world where people are free to express themselves without the fear that the government is constantly monitoring them,” said actress Evangeline Lilly, who is a longtime supporter of Internet freedom and privacy. “Mass government surveillance is a dangerous form of Internet censorship, and I hope this video will encourage everyone to hold governments and corporations accountable when they violate our rights."

Evangeline Lilly’s voice-over in the video explains that spying is not just a privacy issue, it’s a free speech issue. “This open ended surveillance system is illegal and operates in total secrecy...” says Lilly in the video. “Spying on our internet usage gives the government power over our lives. What happens to free speech, free association, or a free press when everyone is under constant surveillance, even in our most private moments?”

A crowd of nearly 300 people gathered in Washington Square Park at 9:00pm last night when Internet freedom groups Fight for the Future and Demand Progress unveiled their about NSA surveillance by projecting it onto the side of a building in bustling Manhattan. lit up the side of a large building as hundreds of supporters and interested bystanders packed the sidewalk and spilled out into the street at a busy intersection adjacent to Washington Square Park.

VIEW VIDEO OF LAUNCH HERE (not posted by the organizers): http://youtu.be/vq1kQEPJLlw

Pedestrians stopped what they were doing to watch the spectacle, as volunteers from Restore the Fourth roamed the crowd handing out free movie popcorn and flyers for the Stop Watching Us rally in Washington, D.C. -- a protest scheduled for the anniversary of the USA PATRIOT Act, October 26th, that has been endorsed by a coalition of more than 100 groups from across the political spectrum. The massive projection was done in coordination with The Illuminator, an NYC collective that uses huge projections to make political statements.

“The NSA and their defenders in Congress have been lying to us nonstop,” said Evan Greer, Fight for the Future’s campaign manager, “We wanted to make a video that explains how the NSA’s spying programs really work, and does it in a way that’s funny and accessible enough to send to your mom or your a-political cousin.” The 5 minute video is a rollicking movie montage that details the NSA’s abuses while weaving together scenes from popular films like The Big Lebowski, E.T., and Ferris Bueller’s Day Off.

“The NSA was hoping they could wait out the public’s attention by using esoteric buzzword-y jargon and trying to obfuscate the full scope of its nefarious dealings.” said David Segal, executive director of Demand Progress, who partnered with Fight for the Future to make the video, “But that’s not what’s happening. Instead, the more people find out, the more upset they are. We made this video to give those people a weapon to educate and inspire others, pointing towards the Stop Watching Us rally in Washington, DC. on October 26th.”

Fight for the Future has a history of making viral videos about Internet freedom, having released a definitive video on SOPA / PIPA that accrued more than 7 million views online and helped change the conversation about the bill and rally the Internet for the SOPA blackout in January, 2011. The group launched an IndieGoGo campaign after the NSA revelations stating their intention to crowdfund a video about NSA spying. They raised nearly $8,000, and were able to team up with seasoned filmmaker Mata Wata to produce the film with Evangeline Lilly’s narration.

Organizers with the groups said they intended to organize more video screenings later this month to continue building support for the October 26th Rally Against Mass Surveillance, which is expected to draw thousands to Washington, DC on the anniversary of the passage of the USA PATRIOT Act.

Video of the NYC Launch (posted by WeAreChange): http://youtu.be/vq1kQEPJLlw

Photos from the NYC Launch (available for use my the press:) 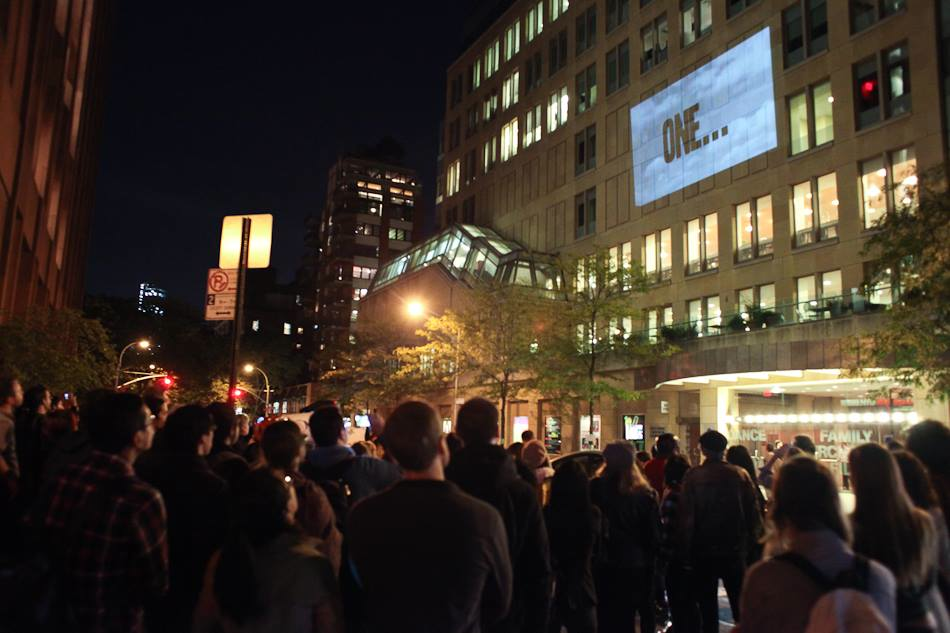 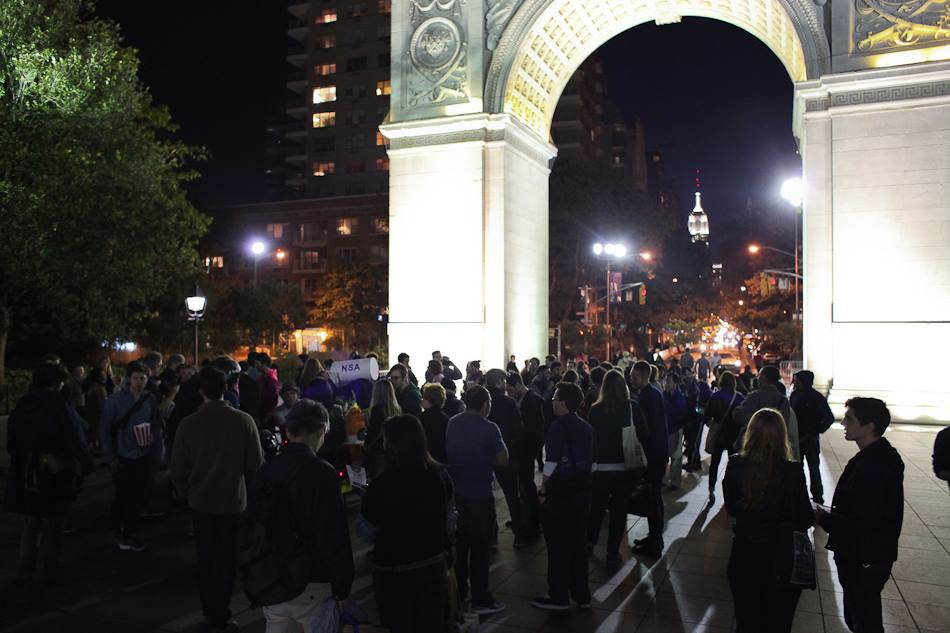 Supporters initially gathered at The Arch in Washington Square Park and then walked together over to the projection site. 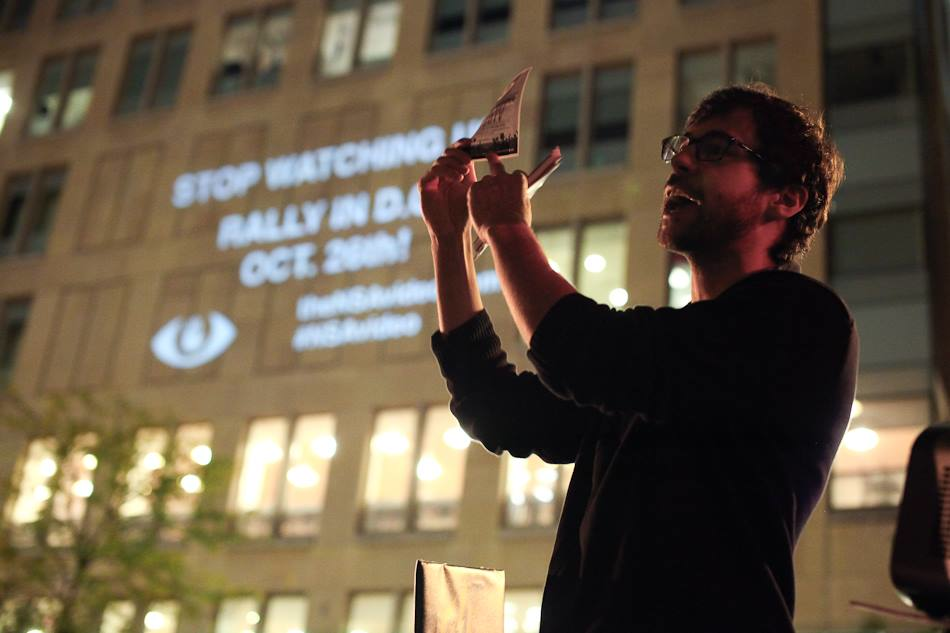 Organizers encouraged the crowd to attend the Stop Watching Us Rally Against Mass Surveillance, planned for October 26th in Washington, DC 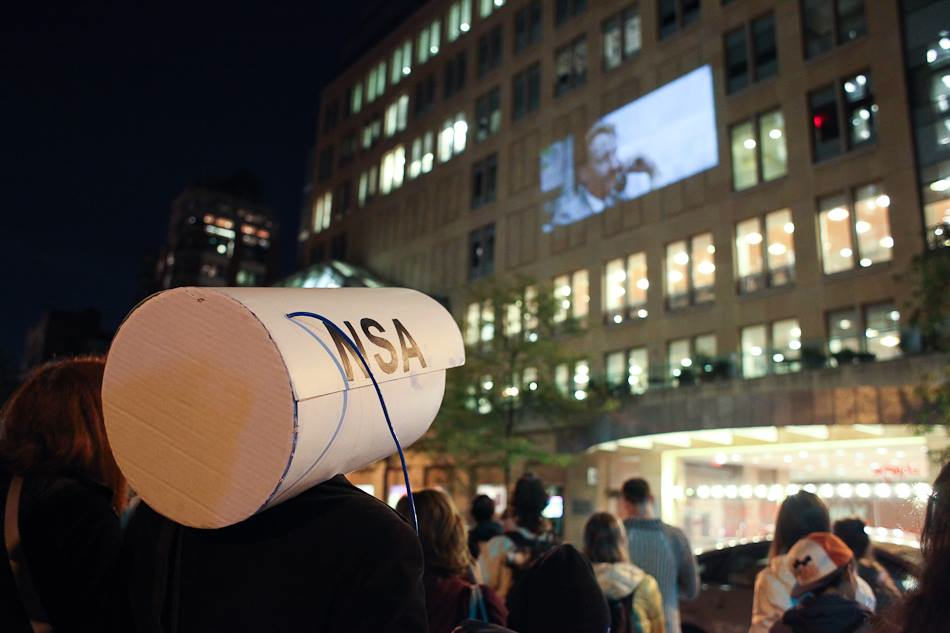 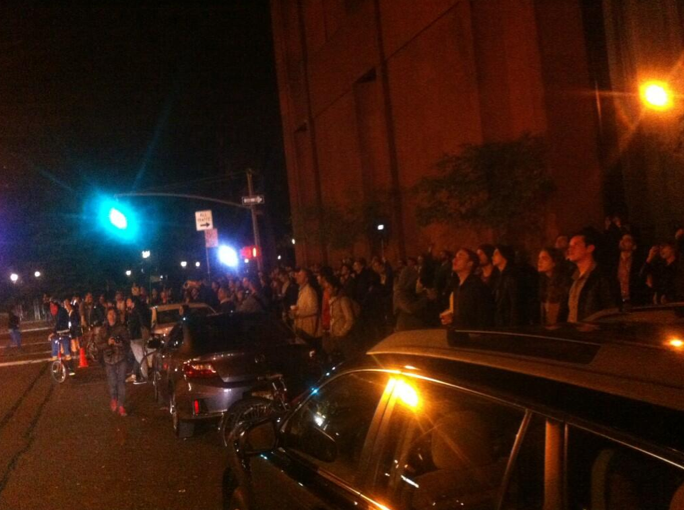