This is Sherry Jones, the Rhetoric and Game Studies instructor of rgMOOC, or “Rhetoric and Composition: The Persuasive Power of Video Games as Paratexts.” This is a college level Rhetoric and Composition course that explores various rhetorical theories for analyzing the meaning of digital games.  During rgMOOC 2 (September 2 - November 10, 2013), @TheGameMole (Stephen Getter) and myself co-created and issued a Minecraft Challenge to all rgMOOC participants to build a rhetorical object in Minecraft.  Are you up for the challenge?

In collaboration with the GamesMOOC, we are posing the same Minecraft Challenge to you!  If you are interested in joining us in Minecraft, please start reviewing the Minecraft Challenge Rules now in order to plan for the object you would like to build!  On December 7, 2013 (Saturday), both myself and @TheGameMole will build nostalgic game objects with you in Minecraft. 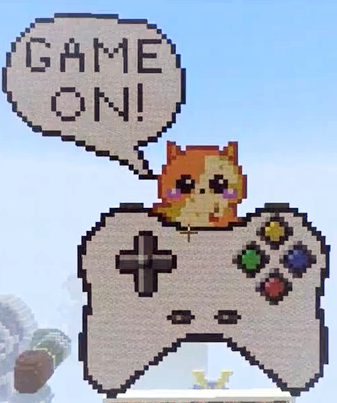 Bonus! (Include either of these concepts in your project):