A message from the Coach

We have come to the finish of round 4, after each month I will recap, comment and praise each team!

I may have been a little critical in some players in the first month but I do want perfection knowing we have a long term goal in place. Knuckles held on by the skin of his knuckles onto his mat and after a solid week on the track and valuable game time and confidence played his best game in the Parker's shirt- not just his bowls but his demeanour- for example Brayden through a short jack, previously the jack would of gone back at a hundred miles an hour but knuckles said good effort not short by much mate! A moment of success in impression and being positive. Very happy for you Knuckles. Our recruits have found their feet and it has taken the best part of the month for duke to hit his straps but gee his quality will shine for the Parker's journey. Pearso has been solid as a rock and fitted into the family nicely. Brayden yet to explode on the scene but very serviceable at the moment. Scotty Mac- is something special, big pick up! We have the reigns on him at this stage because of a holiday coming up. Needs to pick up a few pointers in calling the head and communication but once that comes no one will stop him.

The team is flying and gelling beautifully- top performers are easy, ash and Scotty! Keep up the hunger and drive- the club is going places. 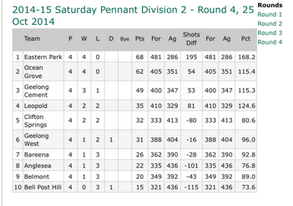 Well well well- the wheels came off on the weekend but it's how you respond to a loss that matters!!! So many positives from this team so far this season- john Hyde and iceman leading the troops with great vibes. Jayden and Luke playing in different roles and really enjoying the challenge. We have Ron Wilson and rocket provide class in the rinks. But a few passengers in the team are proving costly to cover- with poor form on the training track Thursday its heads down and bums up to bounce back this week! Remember to keep positive and support each other. On scores the last two weeks it has been Steve Cox who is in form!!! 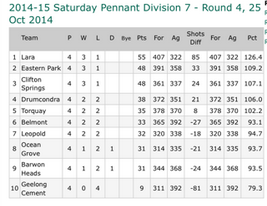 Well in my opinion majority of these players are quality! Blokes like inky, Lenny, Leigh shodde, coxy, KO, rocky, peter and budge all have played at higher levels of bowls. One of our best chances of getting a flag this year- don't look to much into the heavy defeat to lara at Lara! Forty shot better team at home and we know they are strong but we can handle them. The team requires more training on carpet surfaces and keep practising short short ends! By all reports the quick surface caught us out. Big shout outs to berty beetle and les may who on scores are burning up the green on Saturdays but the highest average scorer is Lenny!!! Keep the chin up and go Parker's. 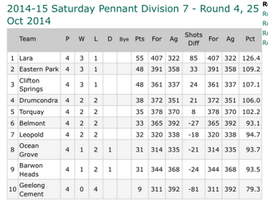 Sitting pretty in second on the ladder and have seemed to gel really well- unfortunately we have 7 out this week so hang with us guys and gal. The surprise packet has been Wendy in the unfamiliar role of skip but has done a superb job so far. The duo of tappers and Aaron required ear muffs for the spectators but the enthusiasm went miles to winning. Keep up the great work. 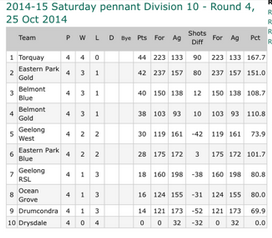 A lot of discussion towards selectors in should we be stacking on of the div 10 teams! But we have 16 players of equal standard so let's go for an eastern park final, wow! In my experience nothing works when two teams of the same club are in the one division- it just doesn't work positively. Div 10 blue are going well, played the undefeated Torquay and going down narrowly. Tough loss on the weekend to eastern park but only half a game out of the four. On scores Royden and bob Dixon have been serviceable. Shaz, Lorraine and Des also key players.

The division 11 team have been rocked with players unavailable and the only constant we have is john Cameron! Hats off to john who is an experienced bowler who practises during the week and providing leadership in the 11s! We have some new bowlers who have put their hand up to play the game of lawn bowls, fantastic! A great win on the weekend... Looking for a big return of Anthony Coxon to steer the ship finals bound. Many thanks to the ladies also who have played their part on making sure we field a team. Division 11 are only half a game out of the finals and play an undefeated Leopold this week... Also well done to john stavros who is doing well also. 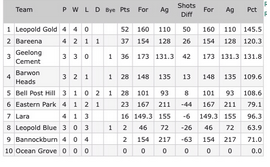