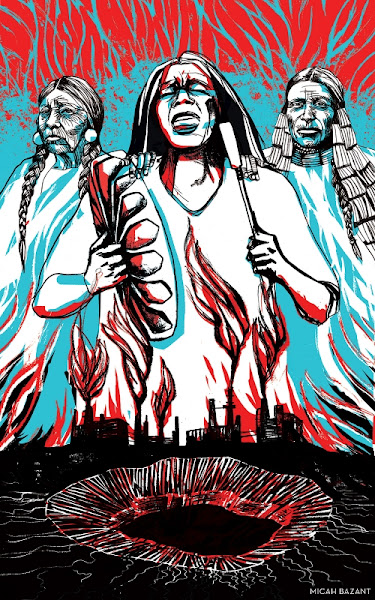 There are many different experiences we will have over Thanksgiving - some of us will have lots of food, some of us will struggle to have enough. Some will be surrounded by people and some will be alone or with just one other person. For many, it’s an important time of coming together with family. This day also gives us a chance to look at and change stories we have about our families and ourselves. Thanksgiving is based on myths that hide and erase the genocide that the United States is founded upon. What would it mean to tell a different story; an honest story?

This past year has been filled with an emboldening of white supremacy. At the same time, more and more people are working to create something different. We cannot expect that justice will ever come if we are not willing to face the injustices of our past and present. Holidays can be a time to connect and talk about these realities and touch people’s hearts in profound ways. This can be fertile ground for lasting change.

The Indigenous Solidarity Network has developed this toolkit geared for white folks to discuss settler privilege and Thanksgiving with family, friends, and broader community. Deep gratitude to Dina Gilio-Whitaker and Roxanne Dunbar-Ortiz for sharing the chapter “Thanksgiving Proves the Indians Welcomed the Pilgrims” from their book All the Real Indians Died Off: and 20 Other Myths About Native Americans. We need to talk about the history and ongoing reality of settler colonialism. (Meaning how European people violently took over lands and peoples for their own gains, and came to stay. In the US, this process of settling included enslaving people of African descent to build a country on Indigenous land.)

If you’re having these conversations with People of Color and/or Indigenous peoples, listen to what they’re bringing. It’s important to look at the complex ways that the colonization of Indigenous Nations went hand in hand with enslaving African people to work that land and how the violence is ongoing, as is Indigenous and People of Color led resistance. It can be hard for any of us to confront the ways we benefit from oppression and hard to talk about with people who do not agree with us. But this is how change starts and gives us the chance for real healing.

We invite you to take a moment to pause and breathe. What is happening in your body right now? How are you? Holidays are intense for many of us - whether they are filled with joy or sorrow and struggle, or a combination. Taking time to pause and notice how we are doing and what is happening can support us to continue to be in hard conversations.

As with any work in which we are acting in solidarity against oppression, we recognize that we do this work not ‘for’ Indigenous Peoples, but in partnership. We act out of mutual interest, recognizing that we are all facing the crisis of climate catastrophe and environmental destruction. It is Indigenous peoples who are fighting back most intensely and defending their lands. Supporting Indigenous protection of lands and waters ensures they will be protected for future generations.

The roots of Thanksgiving are complicated and painful. Native and non-native scholars tend to agree that although there was a feast in 1621, this did not begin a tradition of Thanksgiving. The first recorded “Thanksgiving” was a celebration of murder. Dutch and English mercenaries massacred over 700 Indigenous people during their Green Corn Dance in 1637. The next day, the Governor of the Massachusetts Bay Colony declared Thanksgiving Day to commemorate “subduing the Pequots.”

KNOW WHOSE LAND YOU ARE ON

Colonialism happens in a place. As white settlers, we are taught the importance of private property, the names of towns, counties, and states. Indigenous people have their own names for these places. Your school, the mall, your home, and places of worship all sit upon occupied Indigenous land. We need to realize that all of this is still Indigenous territory. It is important to know whose territory you are in. Find out if those nations, tribes, or Indigenous peoples are still in your area. If not, find out why. Have they been forcefully relocated or pushed out in another way? Are they currently fighting for federal recognition? There will be different paths to building relationships with Indigenous peoples and organizers where you live. We can support local Indigenous struggles from wherever we are and learn cultural protocols (behaviors used to show respect) for being in their territories.

KNOW WHERE YOUR WATER, HEAT, ELECTRICITY & OTHER RESOURCES COME FROM

Indigenous people have been forced off or forced on to smaller pieces of their original homelands, which are known as reservations. Enormous amounts of resources are extracted from reservations, in the forms of coal mining and burning, fracking, uranium mining, nuclear waste dumping, and copper mining, all of which leave toxic pollution for generations. Extractive projects often lead to increased violence against Indigenous women and children, especially because of “man camps.” Huge profits come from extraction on Native lands and little of that money is returned to the communities. Indigenous people are left with the destruction of lands and lifeways, as well as the devastating impacts to physical, emotional, and spiritual health.

Indigenous populations across Turtle Island (the term many Indigenous people use to refer to North America) and around the world are among the hardest hit by the negative impacts of climate change. The reports from the United Nations’ Intergovernmental Panel on Climate Change states that the world is facing catastrophic damage from climate change as early as 2040, including cities and islands covered by oceans and intensifying droughts and poverty. Indigenous Peoples are deeply impacted by these changes and they are often on the frontlines resisting climate destruction and defending Mother Earth.

Colonialism is the root of climate chaos – which is now threatening the future of all people.

Learn more about the connection between colonialism, heteropatriarchy (the gender binary upholding and being upheld by male supremacy) and the destruction of Mother Earth.

White settlers on this continent are here at the expense of Indigenous peoples. If we’re white, our family’s history includes joining the U.S. settler state and benefiting from the displacement and genocide of Indigenous people. Many times, our families came to this land seeking opportunity and fleeing oppression. Pushed by the violence and poverty imposed by capitalism and other oppressions, people of European descent became agents and/or beneficiaries of genocide. We need to grapple with difficult questions in order to change this ongoing reality: Whose lands did our people settle? Whose lands do we currently occupy? Were our families involved in militias or armies invading Indigenous territories? Did they get land through the Homestead Act or other methods of privatizing/stealing Indigenous land? Did they/do we benefit from water rights, real estate development, and cheap energy at the expense of Indigenous nations? What laws have led to white people owning 98% of private land in the U.S.? Researching these histories can give us a better understanding of how (and why) to work toward Indigenous land return.

European settlers were/are required to give up our cultural identities in exchange for whiteness and its privileges. It can be helpful for white people to reconnect with our ethnic lineages and ancestry where so much healing can be found. But this must be done in the context of accountability and reparations to Indigenous people. Without that accountability, we simply erase and perpetuate ongoing genocide.

Cultural appropriation is a continuation of genocide and land theft because settlers steal what does not belong to them, as if it is rightfully theirs. Settlers ‘play Indian’ as part of imagining that they will replace Indigenous peoples, take up their clothing, culture, and lifeways. This happens in many ways such as sports mascots, Thanksgiving pageants, homework assignments that ask students to ‘create something Native,’ Halloween costumes, etc. Most often, these parodies depict settlers as either victims of Native violence, or saviors converting Natives from “savages” to “civilized people.” The Red Nation writes in their 10 point program: “These appropriations contribute to the ongoing erasure of Native peoples and seek to minimize the harsh realities and histories of colonization. These appropriations are crimes against history."

Check out these campaigns and resources:

UNDERSTAND WHAT CHRISTIANITY HAS TO DO WITH JUSTIFYING LAND THEFT

European colonial powers used the Catholic Church’s Doctrine of Discovery to establish domination and ownership over non-Christian peoples and their lands. The first document establishing the Doctrine, written by the pope in 1095 AD, declared any land in which Christians do not live was “empty” and open to conquest. A 1452 document gave Christian explorers “full and free power,... to invade, conquer, fight, subjugate the Saracens and pagans, and other infidels and other enemies of Christ,... and to lead their persons in perpetual servitude, and... appropriate realms…” The U.S. system of land ownership and private property is rooted in these documents. The U.S. Supreme Court has cited them to deny land rights to the Oneida Nation as recently as 2005.

Indigenous peoples continue leading struggles for land, water, and self-determination across Turtle Island. Not all Indigenous communities and organizations are looking for outside support, but many are. Learn about current struggles. Reach out and build respectful relationships with Indigenous peoples. Be ready to hear from people when you have made a mistake, learn from it, and keep doing the work. Collaboration with Indigenous communities will often be request-based and include forms of asking for consent and seeking guidance and input. The goal is not to get Indigenous peoples to join our struggles (whether environmental, women’s rights, or social justice), but to engage with their efforts for self-determination. All this can be a nuanced dance of taking initiative while being guided. Your participation in decision making and giving input should be determined by the Indigenous peoples you work with.

It’s important to address settler colonialism, anti-Black racism, and other forms of oppression simultaneously. Get involved in work that helps to build bridges and support the leadership of Indigenous peoples and People of Color. Show up fully, listen deeply, and base this work in long term relationships.

There are multitudes of Indigenous-led struggles that need various kinds of support. This includes ongoing efforts to support Indigenous political prisoners imprisoned as a result of defending their lands at Standing Rock, Indigenous organizing against border town violence and all forms of violence, and People of Color led organizing for justice and liberation. 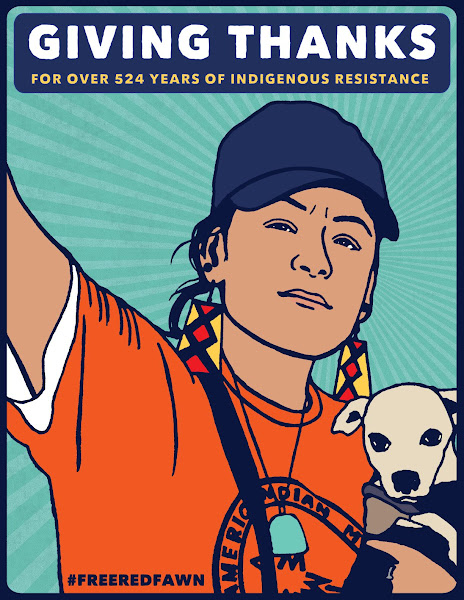 Check out and support these Indigenous-led struggles, movements, and organizations:

WORK FOR REPATRIATIONS OF LAND AND INDIGENOUS SOVEREIGNTY

This work means building long term relationships with Indigenous communities and frontline struggles in your region and globally. It means continuing to bring an awareness of whose land you’re on and how to be in relationship with Indigenous peoples into everything you’re involved in. This means building power to force the state to respect treaties between Native Nations and the U.S. government, supporting Indigenous Nations’ self-determination, working to reject the Doctrine of Discovery, and for land return that is also connected to Black reparations.

Visit showingupforracialjustice.org/indigenous-solidarity to find a copy of this toolkit.

The Indigenous Solidarity Network initially grew out of the work of individuals from SURJ, Catalyst Project and other folks at Standing Rock following ongoing solidarity efforts with Standing Rock fighting the DAPL pipeline and to protect the water.  It has since become a network to share resources, and actions primarily for non-native people to be in solidarity with Indigenous struggles.  We host video calls, create resources like this one, send e-mail updates, and action alerts.  Join the email list to keep updated by emailing anticolonialsolidarity@gmail.com.

We would like to thank the individuals to whom we are accountable and provided constructive feedback in the crafting of this toolkit: Betty Lyons - Onondaga Nation, Barb Munson - Oneida, Chasity Salvador - Acoma Pueblo, Corrine Sanchez - San Ildefonso Pueblo, Tara Trudell - Santee Sioux/Rarámuri.