How to Solve a 3x3 Rubik's Cube

How to Solve a Rubik's Cube | Introduction

The Rubik's cube (sometimes misspelled rubix cube) is a mechanical 3D puzzle, invented more than 30 years ago and still considered as the best-selling toy of all times! Yet, solving the Rubik's Cube is considered a nearly-impossible task, which requires an IQ of 160... Is that really so hard? Definitely not!! Just follow this simple step by step solving guide and you'll shortly find out that you can solve the Rubik's cube as well… Let's get to work! Watch my 7.63s Rubik's Cube solution

The mechanism of the Rubik's Cube 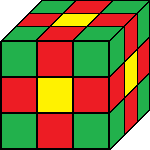 The Rubik's cube is actually a 26 pieces puzzle. There are three types of pieces: (see image)

Corner piece: has three different color stickers on it (there are 8 corner pieces in the cube)

Edge piece: has two different color stickers on it (there are 12 edge pieces in the cube)

Center piece: has one color sticker on it (6 center pieces, all are attached to the core)

The core is the inside of the Rubik's Cube, which holds all the pieces together and is attached to the center pieces with rotatable axes.

Important! The center pieces are part of the core and subsequently cannot move relatively to each other. For that reason they are already "solved". The solving process is actually bringing all corner and edge pieces to the "already solved" center pieces (meaning there are only 20 pieces to solve out of the 26). For example, the blue center piece will always be opposite to the green center piece (on a standard color-scheme cube). It doesn't matter how hard you will try scrambling the cube, it will just stay that way. 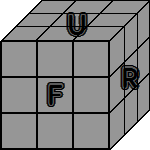 Here is how it works- every face given a letter:

A sequence of moves is called an algorithm.

(If you're having difficulty in finding the CW/C-CW direction of a face (like B or D), temporarily twist the cube so that face will become the F face which is the easiest face to determine the cw/ccw direction.)

Don't be worried about it, you'll easily get used to these move notations.

Now you know everything you need to start and learn how to solve a Rubik's Cube! So, proceed and solve the Rubik's Cube, for good.. Good Luck!

Solving the Rubik's cube is made piece by piece, just like any other puzzle. Therefore the solution is divided into steps each of which solves number of pieces without destroying the ones completed on previous steps. Let's start!

Step 1: Solving the edge pieces of the top layer

In this step we have four pieces to solve. First choose a color to begin with. I chose white in this guide. For this time, choose the white as well, so the images along the solution will be relevant to your solving process. In addition, it is best to start with the white/yellow colors as they are the easiest colors for quick recognition which is important for speedsolving. 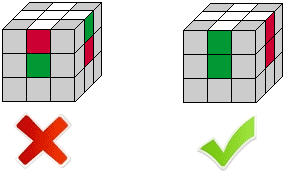 The following examples cover all possible cases for this step:

(solution is below the image/animation)

Step 2: Solving the corner pieces of the top layer

In this step we'll solve the four corner pieces of the top layer.

Pay attention! The corner piece has to match not only the white color on top, but also the colors to the left and right (see correct/wrong images). 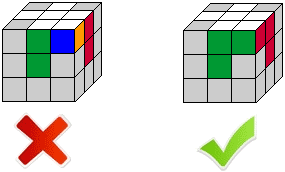 Inserting a corner piece to its solved position is done this way:

First find an unsolved white corner (at the bottom layer), and position it under the place it should be solved into (by doing D moves). Then continue as follows:

The following examples cover all possible cases for this step:

Repeat that for the other three corners.

Solving a corner that its white sticker is in opposite to the upper face (the third case above), is done in two steps. The first is orienting the corner so the white sticker will show on one of the side faces (done by- R' D2 R D), then Solving using the second case solution (R' D' R).

Step 3: Solving the edge pieces of the middle layer

In this step we'll solve the four edge pieces of the middle layer, and by that we'll actually complete the first two layers (a.k.a F2L).

Flip the cube upside down so the solved layer will be on the bottom. Choose an edge piece to begin with which is currently on the top layer, and locate it above the correct center piece to form an upside-down T shape (see image).

In order to insert the edge piece into its position we'll use one of the following algs:

(These are mirror algorithms which basically does the same. One is for edge pieces which are to the right of the solving position and the second is for those on the left)

Repeat that for the other three edge pieces.

In a case that an edge piece is in its correct position but incorrectly oriented (see image), insert a wrong edge piece to this position, and as a result the wanted edge piece will go back into the top layer. Then solve it correctly using the suitable algorithm.

In this step, for the first time we won't completely solve the pieces but only orient them correctly. In other words our step goal is to form a cross shape on the upper face of the cube. The edge pieces do not need to fit the colors on the sides.

There are only four possible orientation states:

In order to complete this step (reaching state 4) we'll use the following algorithm:

This algorithm promotes the cube one state ahead each execution.

Meaning that executing this alg once, on state 1 will promote the cube to state 2, and so on. Therefore, we'll have to apply this alg 1-3 times to complete this step. (Animation note: wait for the algorithm to finish before clicking "play" again, remember to turn the upper face twice yourself (U2) before the last execution).

Pay attention! Executing this alg from the correct angle (angle of the cube in your hands) is crucial. For example, in state 3 it's important to execute this alg when the two correctly oriented edge pieces are facing to the back and left faces, and not to the front\right faces.

In this step our goal is to permute the four last layer corner pieces.

Pay attention! Our goal is only to position the corners in their correct place; we don't have to orient them correctly. For example, take a look at the image to the right; the yellow-green-red corner piece is well permuted.

In this step there are only 2 different possible unsolved states:

If you can't find 2 well permuted corners, turn the upper face (U) until they'll show up. They must be there.

In order to complete this step we'll use the following algorithm: (Keep reading before executing)

In this step our goal is to orient the four corner pieces of the last layer, the ones we have just permuted.

In order to do so we'll use the following algorithms:

If you have only one well oriented corner (like in the alg images), then you are lucky - just execute the suitable alg once and finish this step.

In this step our goal is to permute the last layer edge pieces into their correct position, and by that to completely solve the Rubik's cube.

For that, we'll use the following algorithms:

In this step there are only two possible states:

(Of-course also- all edge pieces correctly positioned can occur- and that means the cube is already fully solved..:) Congratulations! )

If you have one solved edge piece, then execute the suitable algorithm above and by that actually complete the whole Rubik's Cube!

If you have no solved edge pieces, then execute once, one of the algs above (the angle doesn't matter), and by doing that, one of the edges will become solved. Then solve using the suitable algorithm.

Congratulations!! You did it! Keep practicing the solution until you'll be able to solve the Rubik's cube without looking at the algorithms (memorize them), I promise you it will happen sooner than you think!