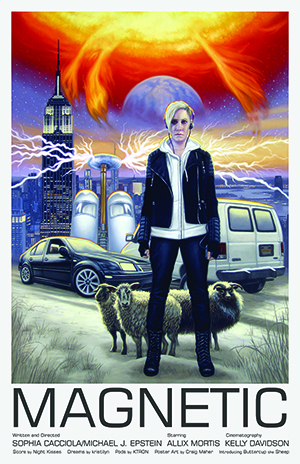 MAGNETIC (2015)
Everything you know will become nothing. Maybe it already has.
A cerebral sci-fi film exploring consciousness and the end of the world.

“...what low budget genre filmmaking should be; unique, challenging, and overflowing with big ideas, money limitations be damned...these folks have created an entire world unto its own, populated by bizarre characters, a near fetishistic infatuation with outdated technology, and rad concepts the likes of which you have never seen before (with a tip of the hat to the aforementioned Mr. Carroll).” - Daniel XIII, Famous Monsters of Filmland

“Magnetic is a love letter to our need for purpose and belonging, to the circuitry that binds us to ourselves and others—and to rotary phones, cassette tapes, and the sound of sweet, sweet synthpop. But you’ll probably think it was about something else entirely.”

“...as with [The Prisoner], those who stick with the tale will be richly rewarded.” -Jeff Berkwits, Sci Fi Magazine

“With Magnetic, the pair managed to harness a phenomenal performance out of their lead and turn in a thought provoking and reflective examination on our need for intimacy.”

On December 31st, at 11:58:07 PM Coordinated Universal Time, Earth will have its atmosphere ripped to shreds by the largest directed coronal mass ejection in the history of the galaxy. These forces will shatter the protective layer on the once stable, life-sustaining planet in an instant. Everything we know will become nothing. Maybe it already has.

After failing in NYC, Alice grabs her mixtapes and returns to her desolate, rural hometown. There, she finds a job in an office located hundreds of feet underground, concealed beneath a sheep farm.

Alice must piece together her memories, her dreams, and the space-time continuum itself to find out why she is so essential to the preservation of all life on Earth.

Soundtrack: http://soundtrack.magneticthemovie.com/ - more info on the music in the film: http://blog.michaeljepstein.com/2015/03/magnetic-electro-soundrack-by-night.html

Additional materials for MAGNETIC (stills and other promo materials): http://www.magneticthemovie.com/stillspress/