Participation to the big shoot and battle for the archers :

The minimum age to participate to the big shoot is 16 and 18 for the battle.

Hereafter we will deal with the bows authorized in the Big Shoot and the reenacment battles. Archers shall be equiped with wooden longbows (French or English historical designs). Wooden laminated bows are allowed

Historical woods for longbows are: yew, elm and ash. Warbows were made of yew wood, however others woods are allowed. A good yew bow have quite few sapwood on the back and a lot of heartwood 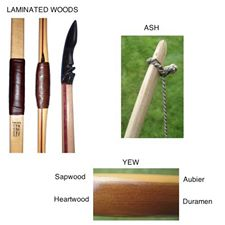 Longbows or warbows are normally at least the height of the archer plus a hand. The coss-section of the bow shall be D type, square or round (see attached drawing). Flat-bows designs are not recommended because, visually, they are far from the designs of the bows of the 100 years war. The true historical cross-section correspond to a D where the depth is longer than the width at the back of the bow. Historicaly, the bow bends along the whole length including at the handle; that is generally not true for more modern designs.) (drawing source:http://www.mcbriens.net/greenhollowbowmen/longbow.htm ) 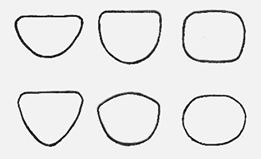 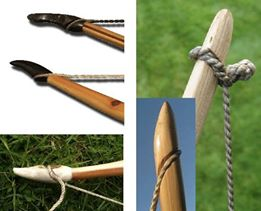 The historic handles of the warbows and longbows have no grip. A mark is made where the arrow is located; this helps a lot when wielding the bow. Leather grips are however allowed

We suggest that archers get bows fitting their physical abilities and brace height; however, the following poundage limitations apply. In the Big Shoot, there is no maximum poundage for the bows. In the reenacment battles, the maximum poundage is 50 lbs using preferably self-slowing down arrows. If the fletching do not slow down the arrows, we suggest to avoid poundage above 30 lbs.

The organizer may not be taken responsible in case of any injury resulting from the use of any bow, light or heavy. There will be no battle reenacment in the Big Shoot. 50 lbs limitation on the bows applies to all the battles that will take place elsewhere

About the bow strings. Traditionally, they are made of linen or hemp; synthetic string, In example made with Dacron threads, are allowed provided they are discreet and with a visual aspect looking like natural material strings.

Knotted strings are better looking in reenacment, however other styles of strings are allowed provided they are not worn out, too thin, or made in poor material

Archers accessories includes protections. For the fingers, as far as I know, there is no conclusive evidence of finger protection except this late tab (Coventry 1500). However, such tabs, considering the poundage of the bows used are very plausible. On paintings, we sometimes see archers with complete gloves. These accessories however are more rich people attires than archer's. Partial gloves are not proven until the 16th century. 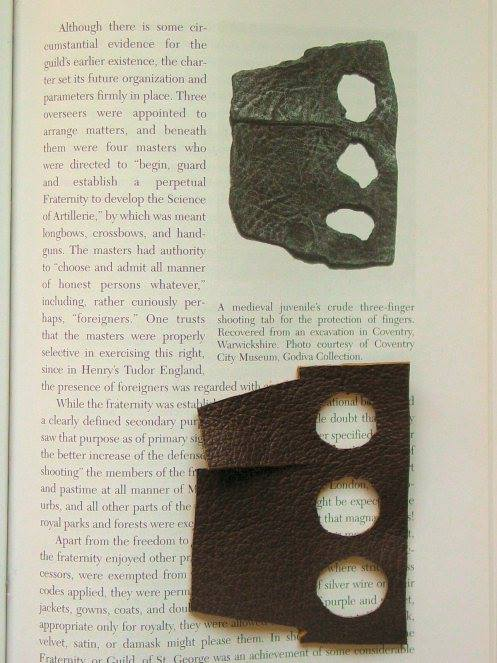 The following tabs are allowed during the shoots. The bracing technic shall be mediterranean: index finger above the nock, middle finger and eventually ring finger bellow the nock 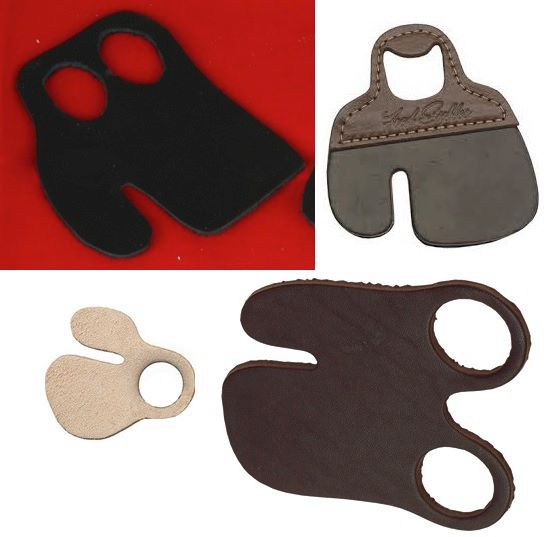 The bow arm may be protected using a modest piece of leather located where the bow string is when the bow is not braced. This protects the erea where the string vibrates at the end of a shoot.

Hereafter is a bracer from late 14th century found in York (Craft, Industry and Everyday Life: Leather and Leatherworking in Anglo-Scandinavian and Medieval York (The Small Finds)) made using an old shoe and my bracer made after that artifact. On paintings, bracers are round or squared, eventually with the corners cut, and they look like the Rose-Mary bracers. 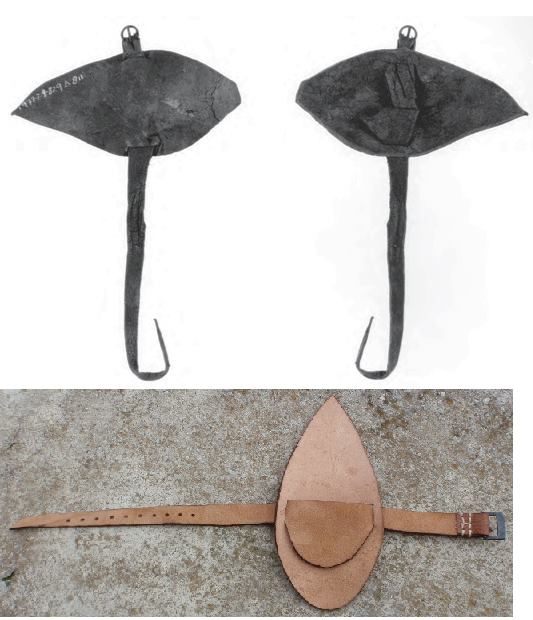 Arrows were usually stored and given to the archers in linen bags, or thus we believe it was. A lots of speculations were made after the remainings found in the Mary Rose, but more ancient pictures proves such bags were used in the Middle -Ages. The use of those bags, with or without arrow-spacer, with or without wicker made frame, is encouraged. Quivers (leather or wicker) hanged at the hips also existed, but were meant apparently only for hunting. Paintings often show archers with only a few arrows tucked in the belt; however, it might certainly have been arrows for quick shooting

Concerning archers in the battles, weapons must be blunted and daggers are strictly forbidden on the battle fields

If archers wish to fight hand-to-hand, they must wear gambeson, Gauntelets, and helmets. Other archers won't take part in hand-to-hand fight.

For the Big Shoot :  Due to the limited size of the area, the number of participants and safety issues, the archers will shoot one rank or line at a time, and not all together at once.

Sharp arrows can be used.

Goose or swan feathers shall be used and shall be white or grey. White or grey turkey feathers are also allowed

Nocks are normally cut directly in the shafts. However, separate wooden nocks or plastic nocks (neutral colour) are allowed. Some archery shops sell wooden shafts with nocks shaped in them

DIY: Here is a method to make simple nocks without hard wood or horn reinforcement using a mini-drill or gimlets (drill first tiny holes and make them larger gradually in order not to damage the shaft), a small saw, a cutter, a small file and/or sand paper. 1: the growth rings shall make a 45° angle relatively to the hole; it will garantee the solidity of the nock. 2: drill a hole corresponding to the bow string thickness (for low poundage bows like mine, 40 lbs, a 3mm hole is sufficient). 3: with the saw make carefully a slot. 4: with the cutter enlarge gradually the slot. 5: finish the nock using the file or folded sand paper and round the end of the nock in order to make the notching smooth. Caution: notching the arrow shall not be hard, but avoid a too loose nock also 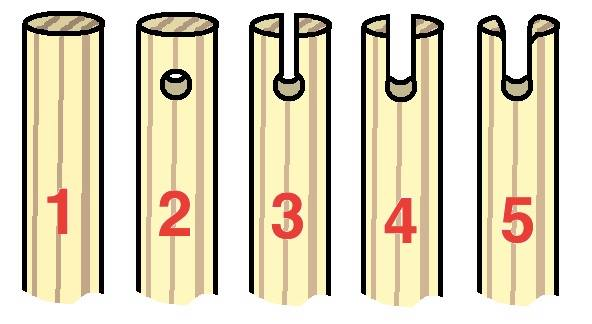 CHOOSING THE SHAFTS: inspect the straighness of the shafts by making them roll on a flat surface and check that the growth rings are well aligned in the shafts and that they deflect very few. The stronger the bow, the larger the shafts. Be carefull to buy shafts or make them so they have the right spine corresponding to the bow weight minus 5 or 10 lbs (bows without window need more flexible arrows so they may go around the bow and then fly straight). Historically, shafts were made of poplar wood at least 1cm wide;

The glue used to stick the feathers may be a natural glue (i.e. skin glue) or a modern glue (wood glue is perfect to stick feathers). 3 feathers are positionned 120° from one another and one of them is aligned with the nock. There will be a sufficient (but not too large) gap between the rear of the arrow and the nock so the fingers fits. A thread of ecru or grey linen is used to tie the fletching until bellow the nock to make it stronger

Couloured whool, a little ribbon or some painting may be used to mark each arrow between the rear of the feathers and the nock. It will help to recognize ones arrows in the field among the other arrows

And finally a link in french and english about the attire of archers :

This is a summary of the work performed by Cecile Lafaurie. A big thank you to her!